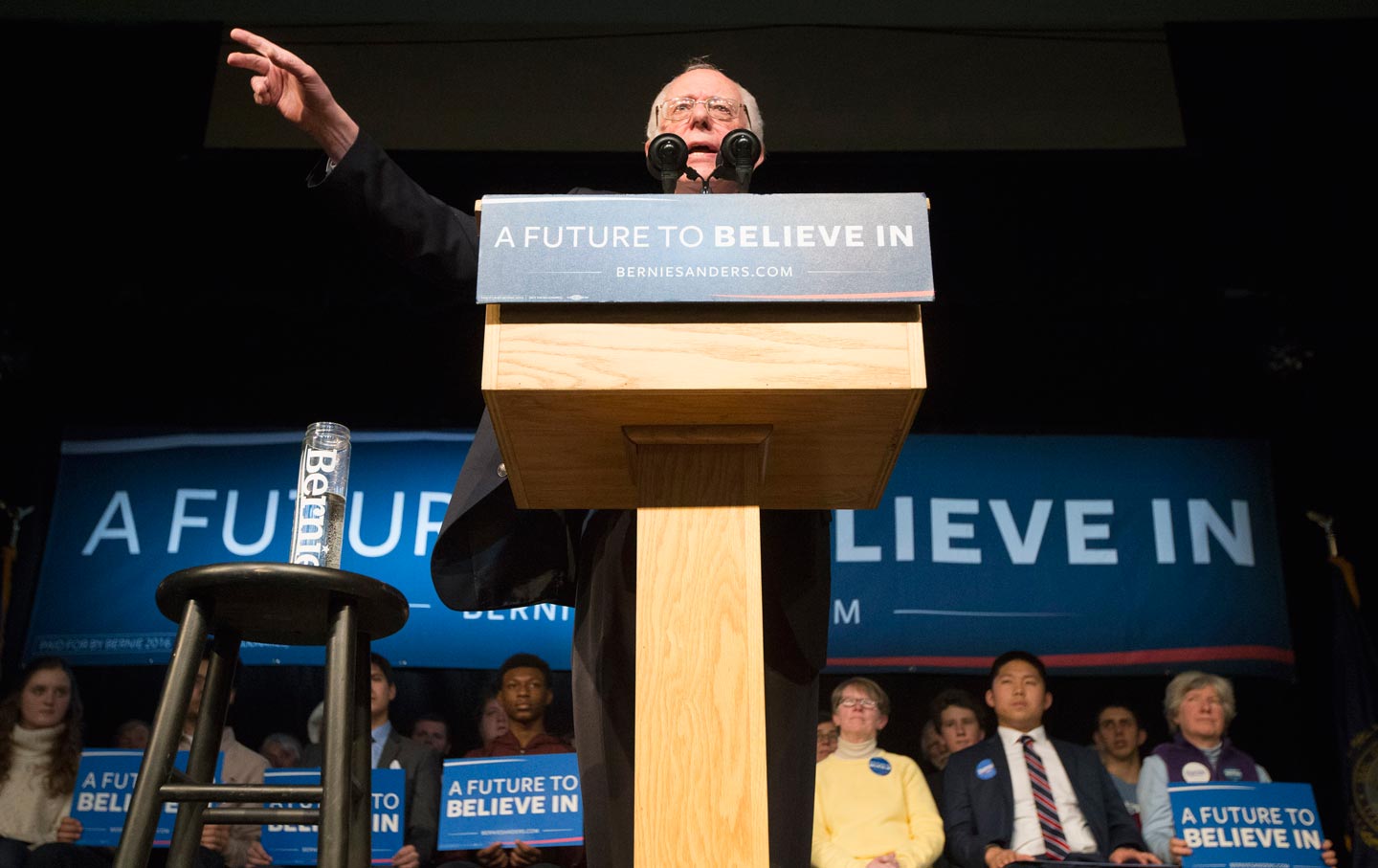 Concord, New Hampshire—The chattering classes seem to have determined that New Hampshire voters think primarily as Northeasterners. Granite State voters are, we are told, regional automatons programmed to back candidates who prefer maple syrup and cheer for the New England Patriots.

By this calculus, much of the explanation for why Bernie Sanders is so far ahead in New Hampshire Democratic primary polls can be traced to the fact that he is from the neighboring state of Vermont.

But is it really true that New Hampshire voters prioritize proximity over the issues that Democratic and Republican candidates are highlighting and the records of these candidates?

Is it really just a matter of “geography.”

There is no question that, in several New Hampshire Republican primaries, New England–tied contenders have gotten a boost from their neighbors. In 2012, for instance, former Massachusetts governor Mitt Romney won the state’s primary after narrowly losing to Rick Santorum in the first-caucus state of Iowa. Famously, in 1964, Henry Cabot Lodge Jr., a former senator from Massachusetts who was serving in Saigon as US ambassador to Vietnam, beat Arizona Senator Barry Goldwater and New York Governor Nelson Rockefeller as a write-in candidate.

New Hampshire voters are not regional automatons who vote for every New England neighbor.

But four years before Romney won New Hampshire in 2012, he lost it to Arizona Senator John McCain in the state’s 2008 Republican primary. And members of the Bush family, who trace their political roots to Connecticut and who “summer” on the Maine coast, have lost New Hampshire to Arizonan McCain in 2000 and to Californian Ronald Reagan in 1980.

New Hampshire Democrats have certainly backed some Northeasterners. In 1988, for instance, Massachusetts Governor Michael Dukakis topped a crowded primary field with 35 percent of the vote. And in 1992, former Massachusetts senator Paul Tsongas topped another crowded Democratic field with 33 percent of the vote. But anyone who remembers 1992 will tell you that it was Arkansas Governor Bill Clinton’s stronger-than-expected second-place finish that opened the way for a “comeback-kid” run that ultimately secured the nomination.

New Hampshire Democrats have frequently dashed the hopes of candidates from neighboring states. In 1972, Maine Senator Edmund Muskie planned to launch his national campaign—as the party’s most recent vice-presidential nominee and a front-runner in the eyes of many analysts—with a big win in New Hampshire. He didn’t get it. After some stumbles of his own, and some dirty tricks by President Richard Nixon’s henchmen, Muskie’s margin narrowed. South Dakota Senator George McGovern closed that gap sufficiently so that, while Muskie lead, McGovern won bragging rights. Muskie never recovered, eventually suspending his campaign as McGovern parlayed his stronger-than-expected New Hampshire showing into more primary wins and the nomination.

In 2004, two New Englanders competed in New Hampshire: Massachusetts Senator John Kerry and Vermont Governor Howard Dean. After losing the Iowa caucuses, Dean hoped to renew his prospects in New Hampshire, but the Vermont connection was only good for 26 percent of the vote. Kerry, who benefited from the fact that Boston media reaches a lot more New Hampshire voters than Vermont media, easily prevailed.

Indeed, it can be argued that New Hampshire’s reputation as a state that backs New Englanders is based on recent patterns of voters who have moved to New Hampshire from Massachusetts, who continue to read The Boston Globe and the Boston Herald (papers that regularly endorse in New Hampshire primaries), watch Boston television stations and often (though not always) back candidates from Massachusetts.

If the polls are to be believed, Bernie Sanders could be the first Vermonter to win a New Hampshire Democratic primary in modern times. But if Hillary Clinton, who won the state in a 2008 upset over Illinois Senator Barack Obama, were to engineer another upset this coming Tuesday, then it might be seen as a case of one northeastern Democrat beating another.

Sanders, a Brooklyn-born transplant to Vermont, began his tenure in elective office as the mayor of Burlington. The senator still resides in that city, which is just across Lake Champlain from New York State. (As a candidate for positions in Vermont, Sanders has appeared often on upstate New York media outlets that reach the Green Mountain State.)

Clinton, who has a long history of campaigning in New Hampshire (for presidential candidate Bill Clinton in 1992 and 1996, for herself in 2008, and for other Democrats since then) is a former senator from New York state. She maintains a residence in Chappaqua, a community north of New York City.

Burlington is roughly 150 miles from the New Hampshire state capital city of Concord.

Chappaqua is roughly 235 miles from Concord.

It is certainly fair to note that Sanders lives 85 miles closer to Concord than does Clinton. And perhaps there are pundits who will find meaning in that distinction.

But the better bet is that there are distinctions between Sanders and Clinton matter more than regionalism.

If Clinton upsets Sanders, it will be because her argument for herself as “a progressive who gets things done” has resonated with New Hampshire Democrats.

On the other hand, if Sanders prevails, it will be because New Hampshire Democrats are more ready for his “political revolution” than the pundits dare to imagine.