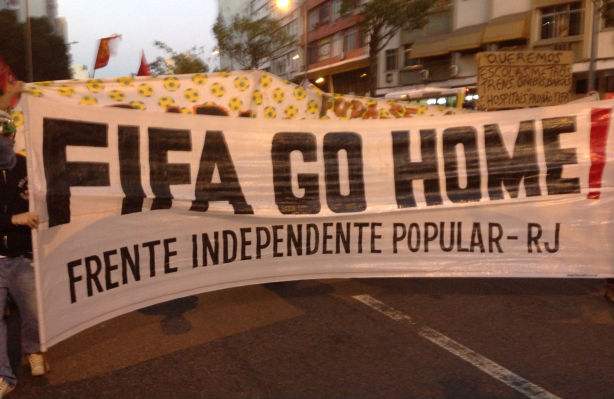 This is the lead banner for Sunday's protest that was gassed by Brazil’s military police. June 15, 2014. (Photo by the author)

It was like a scene from some heavy-handed satire, directed by a wannabe Luis Buñuel. Rio’s military police were marching down the Avenida Maracanã pounding their shields with their batons in a perfect, practiced rhythm. They had positioned themselves roughly a block and a half away from a group of about 500 World Cup protesters marching behind a banner that read, “FIFA Go Home.” The protesters were trying to get as close as possible to legendary Maracanã Stadium, which was about to host a World Cup game for the first time in sixty-four years. The protesters were already surrounded by riot police with bat-length batons, so this particular line of armored officers, while very dramatic in appearance—with their all-black regalia and a line of horses wearing gas masks—seemed a bit superfluous initially, their purpose unclear.

As the police beat their shields, a sizable group of World Cup tourists at an outdoor cafe cheered them on. They even produced a warped version of the classic soccer chant, “Olé olé olé polícia!”  Then the distantly placed military police established the reason for their presence and fired several large canisters of tear gas toward the protesters. What the military police possessed in presentation, they lacked in geometry, as the trajectory was tragically flawed and the first round landed only about fifty yards in front of them. That plus a strong headwind sent the gas back onto the gas-mask-adorned troops, and back onto the cheering tourists, who quickly went from enjoying the show to wearing nothing but expressions of pain and panic, some stumbling while scooping up their crying, young children. (In full disclosure, I was also gassed which may have created a bias against those firing tear gas. At the risk of stating the obvious, it burns like hell.)

Within seconds, the tourists dispersed in a mad panic and a packed cafe became a chaotic mess of overturned chairs and unpaid checks. Technically, even if gassed, it was against the law for all these tourists to “dine and dash” from their tables, at least it was more of a crime than anything I saw the protesters do. The demonstrators stayed together as a disciplined group until tear gas, concussion grenades and, as I discovered later, live ammunition was fired by police at the scene. Then they scattered, creating a predictably chaotic and dangerous state of affairs. I didn’t see the gunfire—I wasn’t seeing much—but the Associated Press caught it and published photos and video of an undercover officer brandishing his weapon and firing bullets into the air. I also didn’t witness the AP’s claim that the police fired the gas as a response to windows being broken by “black bloc anarchist” protesters. But I had received the first misfired dose by then and cannot say for certain. I also saw nothing to support the government’s claim that “Molotov cocktails” were thrown by protesters.

There is a narrative already emerging from this World Cup—even after just a week—that the protests are effectively nonexistent. Everyone is just in a party mood, and the demos are a shadow compared to last year’s Confederations Cup uprising that saw more than 1 million people in the streets. Yes, it is certainly true that the numbers are smaller in comparison to the ones a year ago—hundreds and low thousands instead of hundreds of thousands—but tonight I had a taste why that was the case. It’s not quiescence. It’s fear. For a nation with a president, Dilma Rousseff, who was tortured in her youth fighting a dictatorship, the police acted in a manner that connects more with the dark past than its future. FIFA has returned to Brazil after sixty-four years carrying an echo of a dictatorship thought to be dead and buried. Yet it at least is comforting to think that the events of last night would have even outraged the Lords of Football. After all, if there is one moral principle that guides FIFA, it’s “don’t gas the tourists.”