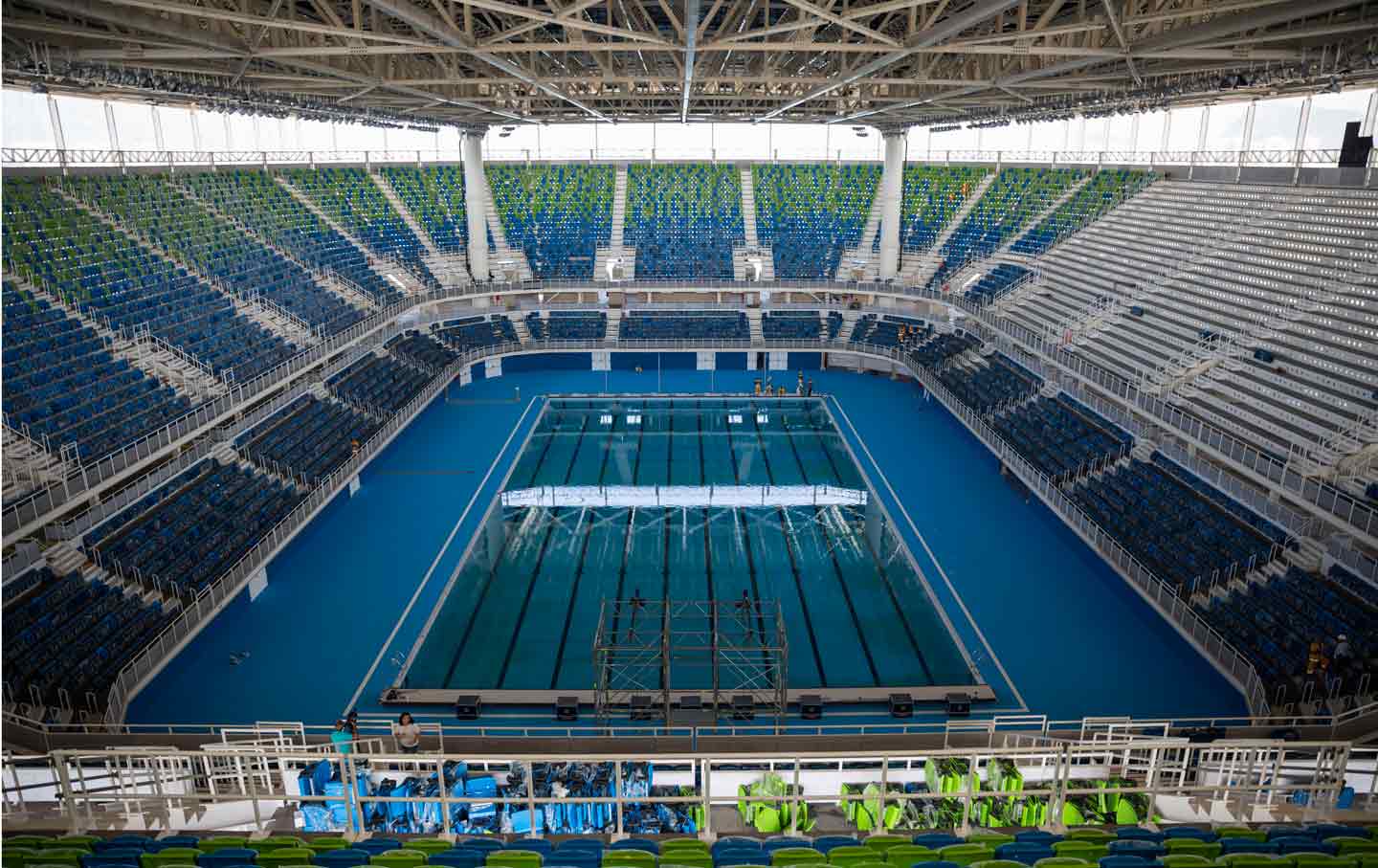 The first thing you notice is nothing, and the nothingness speaks volumes. Upon landing at Rio’s International Airport, you see no indication that we are down to 86 days until the start of the 2016 Summer Olympics. My “sports beat” for the last decade sent me to most of these Olympic and World Cup sites to see what is happening before the games begin, before the cameras are rolled out, and before the IOC/FIFA propaganda machines are operating at full blast.

Yet no matter the country, no matter the hemisphere, there are commonalities to every Olympic or World Cup locale and it always starts at the airport. That’s where you are first assaulted with bright banners festooned with the logos of corporate sponsors. It follows you onto public transportation, where you are reminded that this town is going to be the backdrop for the thrill of victory and the agony of defeat. When you go to any area where tourists congregate, you see the informal economy in full gear, attaching itself to these events to pull some crumbs off of the table: the knockoff T-shirts, bobbleheads, and Teddy bears. Yet in Rio, nothing. When I was here more than a year before the World Cup, the “official vodka of FIFA” (whatever that was) already had its own billboard roughly the size of the Cristo. But less than three months before the Summer Games? Crickets.

Even at the local Olympics ground zero, Praca Maura (Port Maura), where big screens will be erected for people to gather collectively to watch horse dressage or whatever event is underway, there’s no bunting, no ribbons, no souvenirs. For Rio, a place that has never been accused of subtlety, the Olympic yawn is stunning, especially in contrast to the raucous parties in 2009 that greeted the announcement that they would be the first South American country to host. Of course, much has changed since then. The country is no longer in an economic boom and the president, Dilma Rousseff, is involved in an impeachment scandal that makes House of Cards look like Mr. Smith Goes To Washington.

This has undoubtedly taken some of the air out of the balloon. Reuters had a report positing that Olympic promotion was “a victim of the country’s political crisis.” For example, “Embratur, the government tourism department responsible for promoting the Olympics overseas, has had three leaders in 30 days, as consecutive parties abandoned Rousseff, derailing efforts to press ahead with the campaign.”

This is no doubt contributing to the lack of bright signage. Yet there is another reason, locals have mentioned to me: fear that the Olympics are so unpopular in Rio that any official hype would lead to graffiti and street art lampooning their presence. This kind of snarky political protest art—and I use “snarky” as a term of terrific praise—was widespread during the 2014 World Cup. It is possible that fear of the pushback against smiley, happy political murals is as much of an issue as anything else. Yet whether it is government paralysis or fear of mockery, the end result is the same. Rio is keeping its Olympic pep rally on the down-low. If only the displacement and militarization preceding the games were as equally low-key. But just the hype is muted. The pain, not so much.