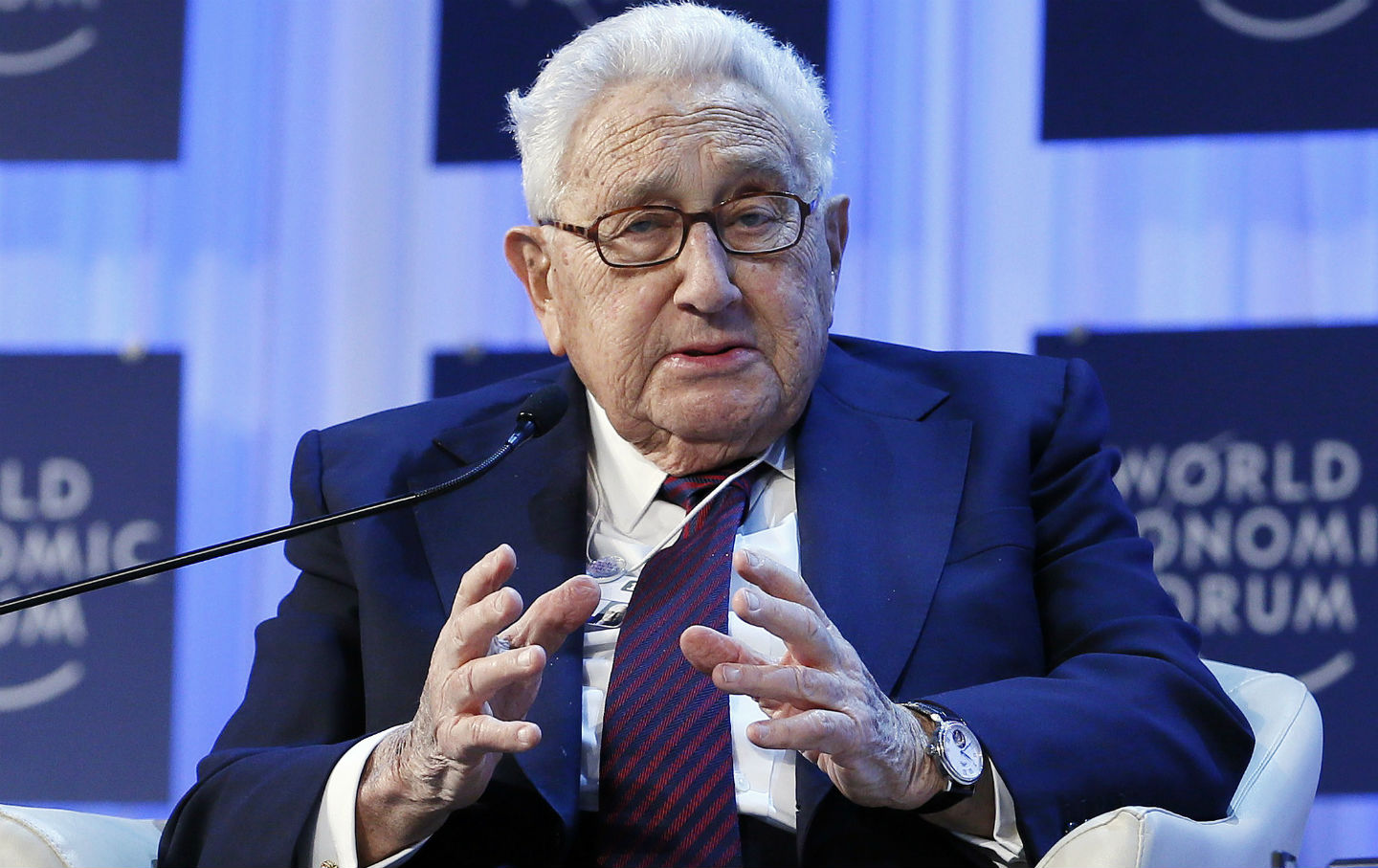 The “international community” these days seems to exist solely to enforce ritualized submission. There’s Greece, of course, targeted by the European Central Bank with what Ambrose Evans-Pritchard called a “nasty, bullying, insistence on ritual capitulation for the sake of it.” Puerto Rico is also many billions in debt to a rigged political economy. “Drop dead,” Washington told its neo-colony, much like it told New York back in the ’70s. The island is near a “death spiral,” says its governor. Then there’s Barack Obama’s unnecessary, vicious attack on his opponents over the horrible Trans-Pacific Partnership—people he knows are his allies and represent the best of this country’s political class. Obama got his fast track.

Among the most disturbing spectacles occurred a few days ago in New York, when the president of Brazil, Dilma Rousseff, called on Henry Kissinger. Death met the maiden.

Captured in 1970 by Brazilian security forces, Rousseff, according to The New York Times, “spent three years behind bars, where interrogators repeatedly tortured her with electric shocks to her feet and ears, and forced her into the pau de arara, or parrot’s perch, in which victims are suspended upside down naked, from a stick, with bound wrists and ankles.” A recent Brazilian truth commission investigation found that over 300 Brazilian soldiers were trained by the United States in the “theory and practice of torture.”

“None of us can explain the lasting damages—we’ll just always be different,” Rousseff recently said of her experience. “I was held for three years. The stress was fierce…. I faced death and loneliness,” she said. “There is something to it that will mark us for life. The scars of torture are part of me.”

Richard Nixon and his National Security Advisor valued Brazil, deputizing its military government to help destabilize Salvador Allende’s government in Chile. “There were many things that Brazil as a South American country could do that the US could not,” Mr. Nixon told Brazil’s president, General Emilio Médici in 1971.

Washington was kept informed of the kind of things Brazil could do, including exactly what it was doing to Rousseff: A 1973 embassy cable to the Department of State reported that “suspected subversives” were “being subjected to an intensive psychophysical system of duress designed to extract information without doing visible, lasting harm to the body.” The embassy said that “older methods of physical violence” (that is, electric shock and stress hanging) were still being used (“which sometimes cause death”) but that Brazil’s torturers were also trying out “newer, more sophisticated and elaborate psychophysical duress system…to intimidate and terrify the suspect.” Through it all, Kissinger and others in Washington worked to keep the money flowing to Brasilia.

As National Security Adviser and then Secretary of State, Kissinger’s support for Latin American death squads and torture regimes can’t be exaggerated. Over the last decade, more and more government documents have been declassified revealing Kissinger’s involvement in and cover-up of human rights abuses in Latin America. He’s tried to defend himself. “Just to take a sentence out of a telephone conversation when you have 50 other conversations, it’s just not the way to analyze it,” he said, after a particularly unflattering recording of him plumping for Pinochet was released. “I’ve been telling people to read a month’s worth of conversations, so you know what else went on.” But now that more information is available, a month’s worth of conversations reads like one of Shakespeare’s bloodiest plays. Maybe Macbeth, with its description of what today is called blowback: “we but teach bloody instructions, which, being taught, return.”

For more than a decade, Brazil has been governed by the Workers’ Party, or the Partido dos Trabalhadores (PT), under first Luiz Inácio Lula da Silva and now Rousseff. Over that time, Brazil pushed back against Washington’s post-9/11 foreign and economic policy. There are many, many criticisms one should make of the PT. But it is undeniable that it has been indispensable in helping Latin America establish some autonomy from Washington, on issues such as trade, the Middle East, militarism, war, Guantánamo, property rights, and surveillance. In fact, Washington’s push for the Trans-Pacific Partnership can at least be partly understood as a response to Brazil’s successful effort at derailing the earlier Free Trade Agreement of the Americas.

But the PT model is in trouble; corruption scandals and a slowing economy have hurt Rousseff, as has the PT’s self-inflicted estrangement from its social movement rank and file; conservative forces, on the defensive for more than a decade, are on the march, backed with ideas and money from abroad (the Koch brothers, among other sources!).

And so Rousseff—who two years ago canceled a trip to Washington due to revelations, thanks to Edward Snowden, that the United States spied on her—comes supplicating. First to Washington, then to New York, where she met with not just Kissinger but also Rupert Murdoch, along with a number of bankers and CEOs.

Kissinger’s involvement in China and Russia are well known, but he also was a key player in Latin America’s post–Cold War turn to neoliberalism. He helped negotiate NAFTA and then advised Bill Clinton on how to get the treaty through Congress (as Jeff Faux notes in his book The Global Class War). And his consulting firm, Kissinger Associates, profited from what one of its agents called the “massive sale” of public utilities and industries, a sell-off that, in many countries, was initiated by Kissinger supported dictators and military regimes—including the one that tortured Rousseff. In Argentina, Kissinger Associates helped implement the economic policies that led to that country’s 2002 collapse. Elsewhere, the firm actively lobbied against “protectionism,” urging Latin American nations to lower tariffs and subsidies.

In other words, Kissinger represented everything the PT once opposed. Rousseff in New York, looking for investment, called him a “fantastic person, with a grand global vision.” I wonder if she showed him her scars.