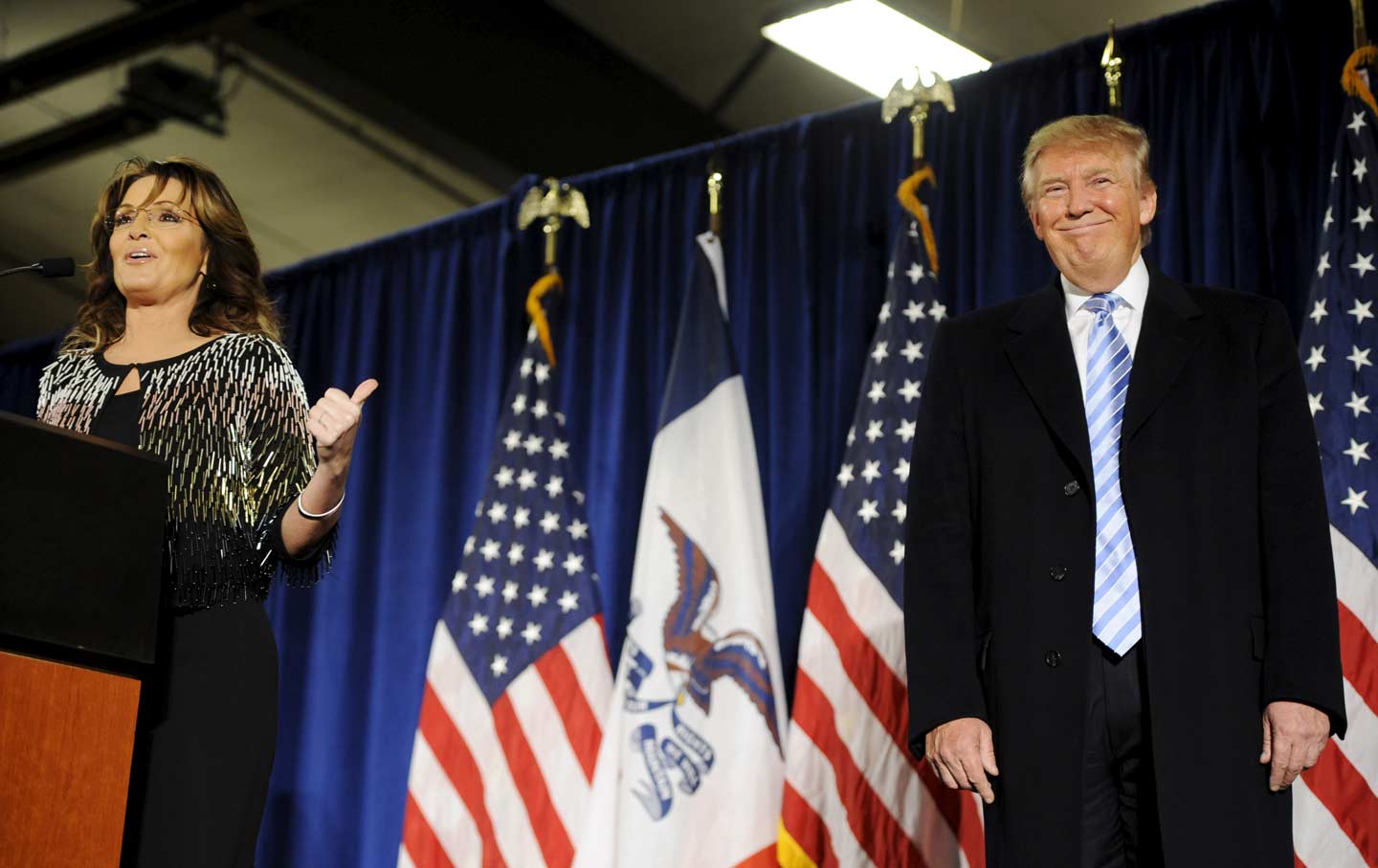 Sarah Palin is not a big deal in American politics. But her endorsement of Donald Trump could be a very big deal for the billionaire’s presidential campaign. How can both those statements be true?

Let’s start with the fact that, at this point in the 2016 race, Trump is not concerned about looking good with the great mass of American voters. He will not feel the sting of the Democratic National Committee’s gleeful comment: “Today, the politician who said she could see Russia from her house endorsed the candidate who the British Parliament considered barring from their country.”

Trump does not need a major boost to get from where he is now to where he needs to be in the race for the Republican presidential nomination. He is already the clear front-runner in national polls and in polls from most of the early-caucus and primary states. But he is not the clear front-runner in Iowa, where Texas Senator Ted Cruz is running roughly even with the billionaire; the Real Clear Politics “poll of polls” currently has it Trump 27.8, Cruz 26.7. Cruz is also thought to have a bit of an organizational advantage.

Even if Iowa’s first-in-the-nation Republican caucuses do not always pick the winner, they have been known to derail front-runners. Trump knows this. So does Cruz. So do the pundits. And so do Republicans across the country.

Trump could really use a win in Iowa. If he gets it, along with the wins he has a good shot at securing in the ensuing New Hampshire and South Carolina primaries, he could be well on his way to becoming the Republican nominee.

“Palin’s brand among evangelicals is as gold as the faucets in Trump tower." -- Ralph Reed

On the other hand, if Cruz squeaks out even a narrow win in Iowa, the Texan could emerge as the giant-slayer of the Republican race—the true believer who saw off the front-runner in the first big test. Trump doesn’t want that problem. So he has turned to Palin, the former governor of Alaska and 2008 Republican nominee for vice president.

Palin’s star has faded since she turned the Republican Party’s 2008 campaign into a theater-of-the-absurd production. But that star still shines with a small but very significant group voters that Trump needs. Although Palin became something of a laughingstock by the end of the 2008 campaign, a lot of conservative purists refused to laugh at her. Rather, they laughed with her—and many still do.

Palin’s favorable rating among Republicans in general has collapsed over the past seven years—from well above 80 percent when she joined John McCain’s ticket, to around 30 percent in recent years—but Palin can still headline a Tea Party rally and draw cheers. The most exaggerated conservatives, especially social conservatives, still view her as a “one-of-us” right-winger who believes what they believe.

Even if Palin has herself gone a bit Hollywood—becoming more of a TV personality than a clearly defined political figure since she quit the governorship of Alaska—no one accuses the former mayor of Wasilla of harboring “New York values.” Cruz does make that accusation regarding Trump, however. More significantly, Cruz is having a field day with old Trump quotes that detail the New Yorker’s history of liberal stances and support for Democrats.

Enter Palin, declaring that she is “proud” to endorse Trump, and in so doing vetting him with precisely the voters Trump needs. She says she is ready to rally “Trumpservatives.” And she might just be able to do that.

In response to the questions that Cruz is asking about Trump’s credibility as a conservative, Palin offers an answer: “How about the rest of us right-wingin’ bitter-clingin’ proud clingers of our guns, our God and our religions and our Constitution, tell us that we’re not red enough?” Her answer, of course, is to dismiss Trump’s foes as “the rest of the establishment candidates” who “duck and hide” from the real challenges facing the nation.

“Palin’s brand among evangelicals is as gold as the faucets in Trump tower,” Ralph Reed, the chairman of the Faith and Freedom Coalition, told The New York Times. Evangelicals who revere Palin may not be the dominant force in American politics. But they know the locations of the auditoriums and halls where Iowa Republicans will be caucusing in short order.

If enough of them are ready to follow Sarah Palin’s lead, they could give Donald Trump precisely the boost he needs.