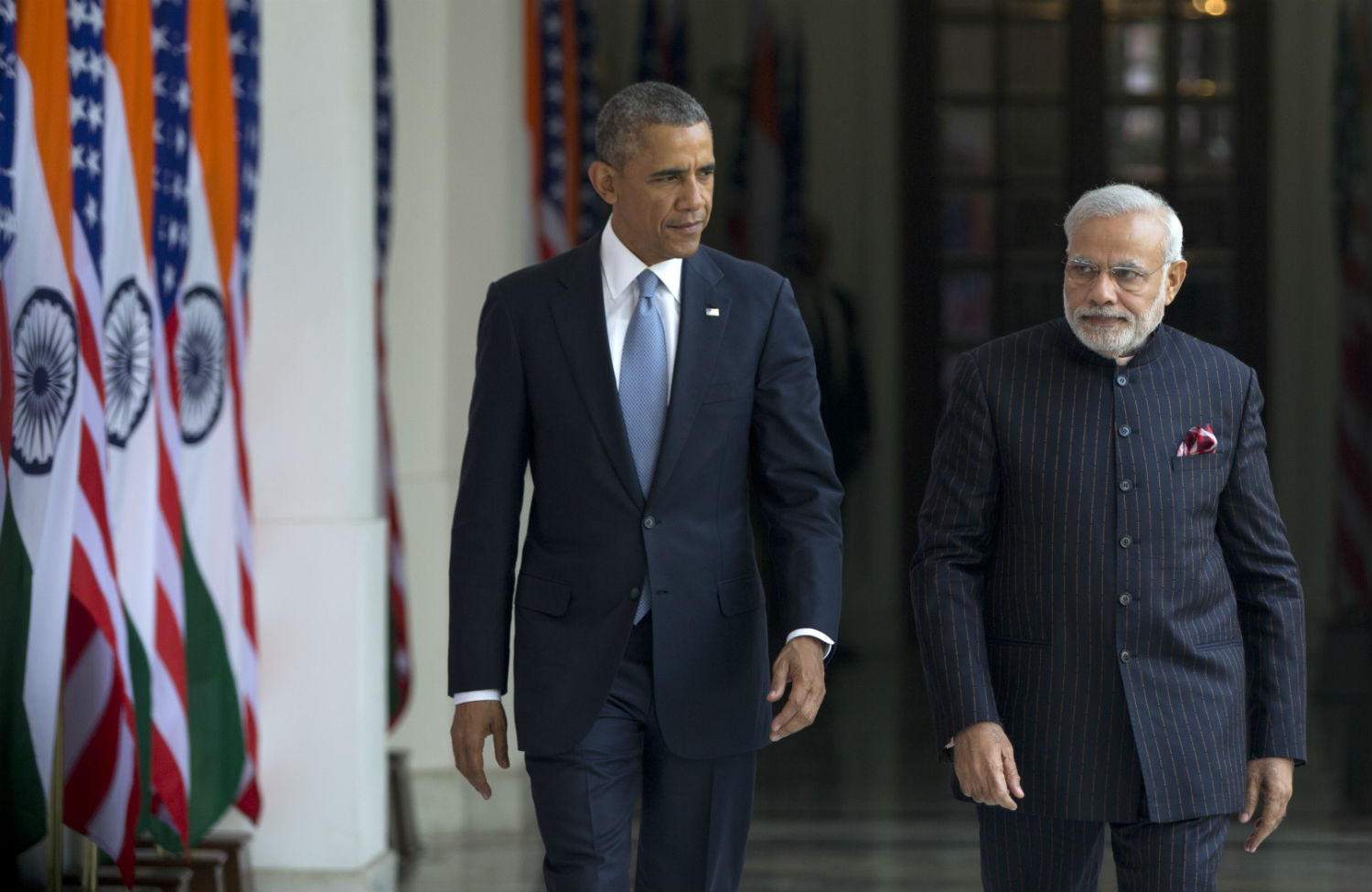 The combination could not have been more bizarre: a Soviet-style grand military parade lasting two hours; a British-Indian imperial venue in front of the former Viceregal Lodge; jingoistic display of a range of armaments, many of heavy Russian make; stifling air pollution that exceeds Beijing’s levels and is estimated to have cut Obama’s expected lifespan by six hours; sorties by brand-new US-made warplanes to showcase sophistication; colorfully dressed mustachioed soldiers riding caparisoned camels; motorcycle stunts with multiple riders that would put virtuoso circus artists to shame…

Barrack Obama drank it all in as the chief guest at India’s Republic Day (January 26), the first US president to have been invited thus, and also the first president to visit India twice while in office. Obama arrived in style, with a several hundred–strong business delegation, officials from numerous departments and agencies, and an entourage of 1,600, including forty sniffer dogs, some of them of officer rank and hence assigned suites with their handlers in the same five-star hotels as other high-level functionaries. The center of India’s capital was taken over, scoured upside down, “sanitized” and “secured” by US Secret Service operatives days before Obama arrived.

Obama had more than half a dozen rounds of talks with Indian Prime Minister Narendra Modi on economic, diplomatic and strategic relations, and signed more than fifteen agreements on military cooperation and arms sales, investment and trade, renewable energy and nuclear power, “smart cities” and visas for information technology workers, and on joint projects in defense and space technology. He signed a 5,700-word joint statement with Modi and performed at five high-profile public-speaking events over three days.

Obama left India immediately after making a town hall speech where he appealed for respect for the freedom to practice, preach and propagate religion, stressed the importance of religious pluralism, and said, “India will succeed so long as it is not splintered along lines of religious faith…”

This was Obama’s only reference, albeit oblique, to the concerns aroused by the ascent of Modi’s right-wing Hindu-nationalist Bharatiya Janata Party (BJP) to national power last May, and by the campaign launched by its even more extreme associates like the Rashtriya Swayamsevak Sangh (RSS or National Volunteer Corps, an all-male Hindu-supremacist group akin to a secret society, with a history of admiration for Mussolini and Hitler) to physically attack Muslims and Christians or bully them into “reconverting” to Hinduism.

Obama was speaking not to Modi’s ministers, but to a 1,500-strong audience mainly comprising students. The president made this intervention probably under pressure from US-based human rights campaigners to address the threat to religious freedom and diversity in Modi’s India. Some of the campaigners were groups like Human Rights Watch, which successfully lobbied the State Department for a decade to refuse a visa to Modi on account of terrible religious violence in Gujarat in 2002 on his watch, in which more than 1,000 Muslims were butchered.

Gujarat’s climate has remained vitiated ever since, allowing Modi to win three state elections as chief minister, which paved his way to national power. Modi won, despite a minority (31 percent) vote, by polarizing the electorate along religious lines in the populous North. He ran a high-octane, corporate-funded campaign, estimated to cost the equivalent of a US presidential election, and cynically exploited the weaknesses of opponents, especially Sonia Gandhi’s Congress.

Obama’s visit was devoted to negotiating and signing diplomatic, military, economic, trade and technology-transfer agreements. The absence of any engagement with Modi on the issue of religious pluralism and religion-driven violence in effect legitimized him as a “normal” politician elected to lead a democracy. Modi took full advantage of that absence. He ostentatiously hugged Obama several times, called him by his first name nineteen times during a joint radio broadcast—a compliment that went unreciprocated—and showcased himself as Obama’s friend. The media celebrated this as US acceptance of Modi’s India as a great power.

The most important agreement signed was the “Joint Strategic Vision for the Asia-Pacific and Indian Ocean Region,” a long-term bilateral military alliance covering a huge area “from Africa to East Asia” and involving India in “safeguarding maritime security and ensuring freedom of navigation and overflight throughout the region, especially in the South China Sea.” The agreement chides China for provoking tensions in the region by calling on “all parties to avoid the threat or use of force and pursue resolution of…disputes through all peaceful means.”

The document also “welcomes” India’s proposed entry into the Asia-Pacific Economic Cooperation forum, dominated by the United States and Japan. India’s entry would help APEC counter the New Silk Road economic partnership being launched by China. The idea underlying both moves is to recruit India into a partnership with the United States to contain China’s growing military and economic power in the Asia-Pacific-Indian Ocean region, as part of the US “pivot” to Asia.

When this idea was first proposed in 2012 in a diluted form, India resisted it under Prime Minister Manmohan Singh. This is not because India then adhered to Non-Alignment. That doctrine, highly thought-of in progressive circles worldwide, was abandoned soon after the Soviet Union collapsed in 1991.

Singh resisted the alliance because there was at least a weak consensus among New Delhi’s policymakers that India wouldn’t become a permanent ally of any power. It would maintain friendly relations with a range of countries within a complex foreign policy agenda but would retain some autonomy in foreign and security policy. Besides, India would be on the side of the world’s developing countries, and try to lead them in a fight for a better deal from the developed countries.

That consensus eroded over the years, as India became an “emerging economy” under brazenly pro-corporate economic policies, which were environmentally destructive, inequality-enhancing and did little to reduce mass poverty. A turning point was the signing in 2005 of a far-reaching US-India defense cooperation agreement, followed by the even more controversial US-India civilian nuclear cooperation deal, both under Singh.

The latter deal made a special one-time exception for India in the global nuclear commerce regime, allowing it to import nuclear materials and reactors even though India is a de facto nuclear weapons state and hasn’t signed the Non-Proliferation Treaty or the Comprehensive Test Ban Treaty. The deal was opposed—covertly by China and overtly by Pakistan—at the International Atomic Energy Agency, but it was pushed through by Washington and approved in 2008.

To win that deal, India voted twice—under “coercion,” as a US diplomat publicly said—against Iran’s nuclear program, undermining India’s own interest in an Iran-Pakistan-India gas pipeline project then under negotiation. To please US business lobbies, India has from time to time compromised its own people’s interests—for instance, by loosening price controls on essential medicines before Modi’s US visit last September.

Now Modi has completed what Singh set out to do but couldn’t—in his first term as prime minister (2004-09) because he was constrained by the left parties on whose support his minority government depended; and in his second term (2009-14) because he was seen to be far too weak to attempt a major policy shift.

Modi faces no such constraints and is naturally inclined toward the United States. This is in keeping with his long-term affiliation to the RSS-BJP, America’s Cold War allies; his strongly pro-business, pro-globalization bias; and, not least, his intimate links with the non-resident Indian community in the United States, of which Gujaratis are the largest and most conservative group.

Modi’s bilateral talks with Obama were dominated by China for the first forty-five minutes, to the exclusion of other issues. To the American negotiators’ pleasant surprise, Modi accepted US language on China without negotiation, something uncharacteristic of Indian leaders. Like many middle-class Indians, Modi probably nurtures a deep antipathy to China on account of the Sino-Indian war of 1962, in which India was routed.

Getting into the global Big League might fulfil a dream of India’s elite, which has always craved recognition. But it hasn’t worked out the implications of a long-term China-containment strategic alliance with Washington. For one, in India, the United States is widely seen as a global bully whose recent interventions in Iraq, Afghanistan, Libya and Syria have left a mess worse than earlier dictatorships. American power remains deeply unpopular in countries that are important to India and Indians (for instance, those in West Asia that employ large numbers of Indian migrant workers).

For another, China has reacted negatively to Obama’s visit and has accused India of being envious of “China’s continuous rise.” It would be counterproductive for India to enter into a hostile relationship with China when negotiated solutions are eminently viable, as shown by recent progress in trade and talks to settle border disputes.

And third, by wantonly antagonizing Beijing, India would only facilitate an understanding between China, Pakistan and Russia; the last two have recently developed significant military relations, and China is Pakistan’s “all-weather friend.” This cannot be good for the health of India’s own neighborhood.

Obama could have counseled restraint on Modi, asking him to mend rapidly worsening relations with Pakistan, and respect secularism and tolerance and pursue inclusive economic policies at home. But Obama ended up sanctifying Modi’s extreme-right orientation while selling arms and nuclear power projects, which the world is rejecting, especially after the disaster in Fukushima.