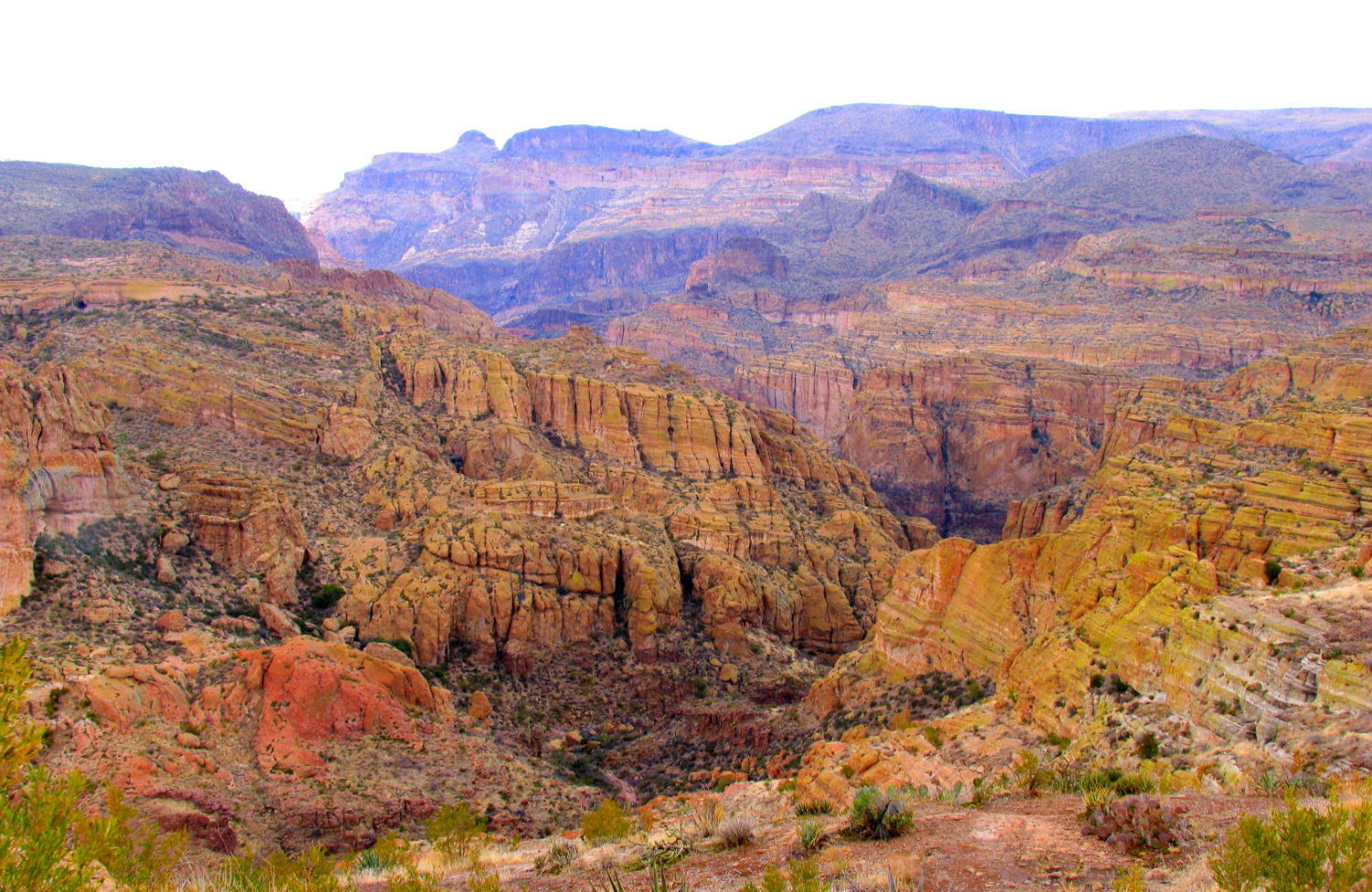 The Tonto National Forest in Arizona (Photo by Janet Ward/NOAA)

In December, two Republican senators, John McCain and Jeff Flake, pushed Congress and the president into giving away what could amount to over $130 billion in public property.

That’s enough to provide every single unemployed American a minimum-wage job for an entire year. That’s enough to pay for a year of tuition at a public institution for every college student in the US.

I’m talking about the huge giveaway to the mining companies Rio Tinto and BHP Billiton in the Defense Authorization Act. It was splayed across ten pages of the bill, pages 441 to 450 (out of 697).

Rio Tinto is a 142-year-old mining company headquartered in London with management offices in Melbourne, Australia. It has a market capitalization of $74-$87 billion. BHP Billiton is a 155-year-old mining company, also run out of Melbourne. It has a market capitalization of $124–126 billion. Based on market value, they are the two largest mining companies in the world. Rather than actually competing against each other (no chance of that happening!), they joined hands. Rio Tinto owns 55 percent of a company called Resolution Copper Mining LLC, and BHP Billiton owns the remaining 45 percent. And thanks to the maneuvering of GOP senators McCain and Flake, the US government is handing over land with more than $130 billion in underground copper to Resolution Copper.

In a land-swap deal, the Defense Authorization Act took four square miles of Tonto National Forest—public land in Pinal County, just outside Superior, Arizona—and gave it to Resolution Copper, so that Resolution Copper can build a copper mine on the site. According to Resolution Copper’s website, the copper resource under that land contains 1.6 billion metric tons of copper-rich ore, which itself contains 1.47 percent copper. (That’s roughly 30 pounds of copper in every ton of ore.) So there are approximately 23.5 million tons of copper sitting under those four square miles of public property.

The law does say that if the land Resolution Copper gives the federal government in return is less than the federal land they just got, they’ll have to pay the difference in cash. But that Resolution Copper gets a say in which appraiser gets chosen, and it’s not clear that the appraisal will fairly incorporate the value of the copper reserves.

(Wouldn’t it have been much simpler to put the land up for competitive sale, with a prescribed mandatory royalty? That’s how oil and gas leases on federal property are handled. But then there would be no way to “throw” the property to Resolution Copper, or to finagle the consideration for it.)

Rio Tinto and BHP’s minions had tried to get the Resolution Copper swindle through the House of Representatives as a separate bill. They failed, even when the GOP controlled the House. But when McCain and Flake stuffed it into a huge defense bill, it sailed right through. (I voted against it, by the way.)

There is a certain irony that Senator Jeff Flake, of all people, earmarked this public land for Resolution Copper. During his twelve years in the House of Representatives, Flake was famous for exactly one thing: trying—and failing—to kill other congressmen’s earmarks. 60 Minutes glorified him as a Mr. Smith Goes to Washington character for that. Flake offered 140 amendments to kill individual earmarks. The House voted against Flake on 138 of them. One was ruled out of order. One of them passed, in which Flake blocked a $129,000 grant to a charity in North Carolina.

So Flake kept $129,000 out of the hands of a charity, ran for the US Senate on that basis as an anti-earmark champion, and won. And now he has helped the two largest mining companies in the world to land worth over $130 billion.

And don’t even try to tell me that the government just had to transfer this land to a private company, or it never would have been developed. The ten largest oil and gas companies in the world, by reserves, are all government-owned: the national oil companies of Saudi Arabia, Iran, Qatar, Iraq, Venezuela, the UAE, Kuwait, Nigeria, Libya and Algeria. (Exxon is number fourteen on the list.) In fact, that one copper mine in Arizona that we just gave away has as much in copper resources as China National Offshore Oil Corp. (CNOOC) has in oil reserves. And CNOOC trades on the New York Stock Exchange, and has a market capitalization of $63 billion.

Or we could have just auctioned off those four square miles of public land. Of course, with Rio Tinto and BHP Billiton colluding rather than competing, we might not have seen anything even remotely resembling fair value that way, either.

Not all is lost, however, or at least not yet. Reading through this ten-page travesty, I saw that there are three things that have to happen before Rio Tinto and BHP Billiton finally get away with this legislative larceny:

(1) The land happens to be an old Native American burial ground. Before things proceed, the secretary of agriculture and Resolution Copper have to find “mutually acceptable measures to address the concerns of the affected Indian tribes.” Maybe they won’t.

(2) The secretary of agriculture has to prepare an environmental impact statement “which shall be used as the basis for all decisions under Federal law related to the proposed mine.” Maybe the project won’t pass environmental muster.

Note to Secretary of Agriculture Tom Vilsack: I am begging you to make sure that the appraisal of that Tonto National Forest property fully reflects the copper in it, and I won’t be happy unless I see a figure in the tens of billions of dollars. Just this once, let’s stop this scheme to steal this valuable resource of the people, by the people and for the people away from us.