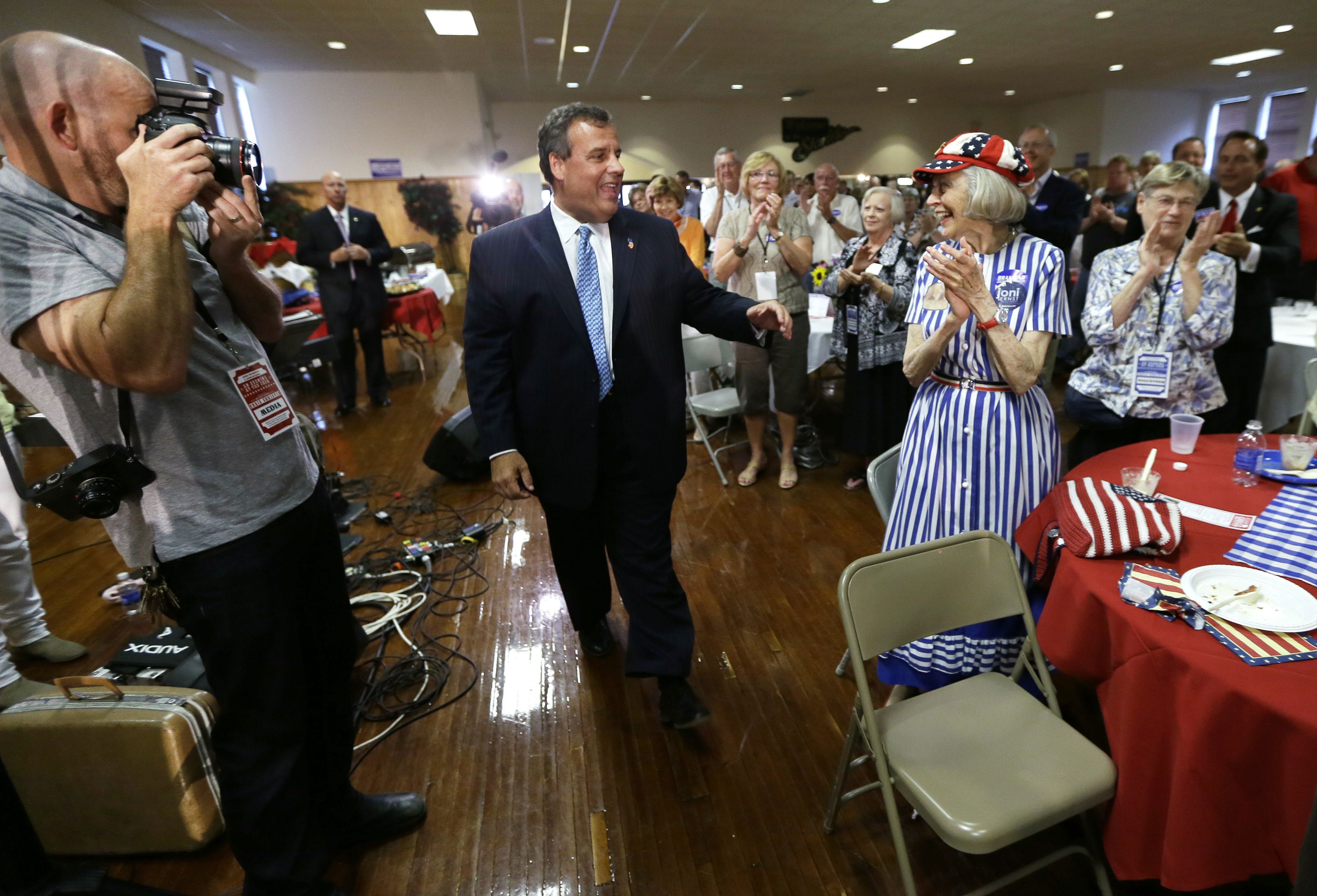 The US attorney in New Jersey is investigating Bridgegate, the Sandy aid scandals and corruption at the Port Authority, and so is the New Jersey state legislature and the Manhattan district attorney. Meanwhile, Governor Chris Christie is embroiled in a bitter fight with teachers, state employees and New Jersey’s unions over the governor’s decision to slash state contributions to the pension fund. But Christie, eyes fixed on 2016, is plowing ahead, including a high-profile, candidate-style visit to Iowa last week—and, it appears, getting some support from would-be Republican primary voters and caucus-goers.

While an NBC/Marist poll found that Christie has high negatives among GOP voters in the early-primary states—33 percent negative in Iowa and 31 percent in New Hampshire—he’s getting positive coverage in papers from The Des Moines Register to The New York Times.

In the Register’s story, entitled, “Big buzz for Chris Christie at café in Iowa,” Christie was described as having a “force of nature personality” that is “spotlight-attracting,” and it added that the crowd “swooned” at Christie. (Although, as Matt Katz reported for NJ Spotlight, the café was “packed with Republican activists (and void of actual diners).” When Christie was asked about the poll showing that 33 percent of Iowans had a low opinion of him, he joked: “Only a third? Pretty good, man.… That’s not bad, I’ll take it.” And to be sure, the poll found that half of Iowans, exactly 50 percent, have a positive feeling about the New Jersey governor. In a conservative state, heavily populated by evangelical Christians and Tea Party types who don’t look warmly and fuzzily at Christie, actually that isn’t bad. (That, despite the fact that, according to USA Today, something called the Judicial Crisis Network spent $75,000 in Iowa slamming Christie for supposedly allowing the New Jersey Supreme Court to drift leftward.)

In the Times (“Far from scandal at home, Christie basks in limelight on Iowa trip”), Christie is portrayed happily bantering with Iowa voters, joking and posing for selfies, and telling locals, “I will be back. I will be back a lot.” The Times report added that some Iowa Republicans seem to like the fact that Christie is being lambasted by the media and the Democrats because, as a 79-year-old Iowan put it, Christie was “the lead dog.”

In a separate piece, “10 Questions for Governor Chris Christie of New Jersey,” the Times—which notes that Christie has “returned to the national spotlight in recent weeks”—got Christie on the record on issues from New Jersey’s own troubles to the scandals that began with Bridgegate to whether or not he’ll be a candidate in 2016. Predictably, Christie blamed the scandals on an aide or two who went “rogue,” and unless US Attorney Paul Fishman and the other investigators turn up something conclusive, that’ll be his answer from here on out. Fuggedaboutit, in other words.

In the Times Q&A, perhaps the most interesting exchange was Christie’s response to a question about the GOP split between the Tea Party and the “populists,” on one hand, and the “business Republicans” and “the guys [that] have the money,” on the other. In his answer, Christie put the emphasis on what he hopes will be his appeal, namely, his down-to-earth, regular-guy persona—even though, of course, Christie’s own political base is the GOP’s Wall Street and hedge-fund people:

Q. How do you knit those together?

A. Carefully. There’s always divides inside any vibrant, political movement, and so the way is just be yourself, here’s what I believe in. And try to convince people that if what they are look for is a candidate they agree with 100 percent of the time, what they need to do is go home and look in the mirror. They’re it. You are the only person you agree with 100 percent of the time on these issues. So don’t try to be that. If you try to be that, they are going to perceive you as a phony, because you are.

Note to Christie: if you kowtow to Wall Street but pretend to be a man of the people, you are what’s called a “phony.” (Hillary Clinton, take note.)

Nevertheless, as Katz reports, Christie’s hosts played “Hail to the Chief” at a diner that Christie visited, and the exchanges that the governor had revolved on how tough he is and, of course, whether or not he can beat Clinton:

“Are you ready to beat Hillary?” a woman at MJ’s asked Christie.

“One thing I never lack is confidence,” Christie said. “You don’t have to worry about that.”

“Why can’t you be tough right now?” she asked.

Voter after voter said what they liked about Christie wasn’t his policies—many said they wished he was more conservative on issues like abortion—but his style. Phrases like “strong leader” and “straight-shooter” and “tells it like it is” came up again and again.

“Ronald Reagan had the same talent—he could smile, meet people, make you feel like you knew the guy a long time,” said Richard Bice, 82, who met Reagan in Des Moines in 1980.

“I just like the way he goes after people,” said 72-year-old Joyce Dierks. “I like his forthrightness. He says it tells it like it is. And that’s what we need.”

The crowd, finishing up their pulled pork sandwiches, gave Christie a standing ovation when he was done, and followed him out the door. As Christie got into an SUV, “Hail to the Chief” played from speakers attached to a trailer that was pulling a large plastic elephant.

Writing in The Record, a New Jersey daily in Bergen County, Charles Stile—no pushover for Christie—reported that what the GOP crowds in Iowa want is a “winner,” and all along—as Christie Watch reported, ever since his speech in March to the Conservative Political Action Conference (CPAC)—that’s been Christie’s message, namely, that he can win. As Stile reports:

The overriding theme that emerged in nearly two dozen interviews—from small-town Republicans in farm crossroads to party activists and elite donors—is that Republicans now have a mixture of hope, ambivalence and wariness about Christie, his record and his ability to capture the first-in-the-nation Iowa caucuses and possibly the Republican nomination. But running alongside all of that is another powerful and alluring pull Republicans have toward Christie: Republicans want to win the presidency, especially if Hillary Clinton is the Democratic nominee. And despite their misgivings about him now, Christie might be the Republican to do that….

“I think he starts from a negative perspective in Iowa,” said Jeff Zaum, a political consultant in Iowa and Illinois. Zaum said he believes most voters will view Christie as the 2016 version of former New York Mayor Rudy Giuliani, who bowed out of the 2012 race after a poor showing in the early primaries.”

“We want anybody but Hillary,” said Chelle Adkins, a Republican state central committee member from northern Iowa who is not a big fan of Christie. “You pick the best Republican and put him out there even if you only agree with him 80 percent of the time.” Once elected, she said, “we can lobby him over the other 20 percent.”

In the Register’s Q&A, Christie was asked: Are you conservative enough to win Iowa? His answer:

They don’t go in there and say: “Are you conservative enough or are you liberal enough? Are you moderate enough?” That’s not what people say. They say: “Do I trust him? Can I count on him to tell me the truth? Is he somebody who can actually be a competent steward of our country’s future?” That’s the way people judge, I think, who they’re going to vote for for president, for governor or for any other job.”

However, those Iowa voters who hope that they can “count on him to tell me the truth” ought to be paying closer attention to what Fishman’s investigators are doing.