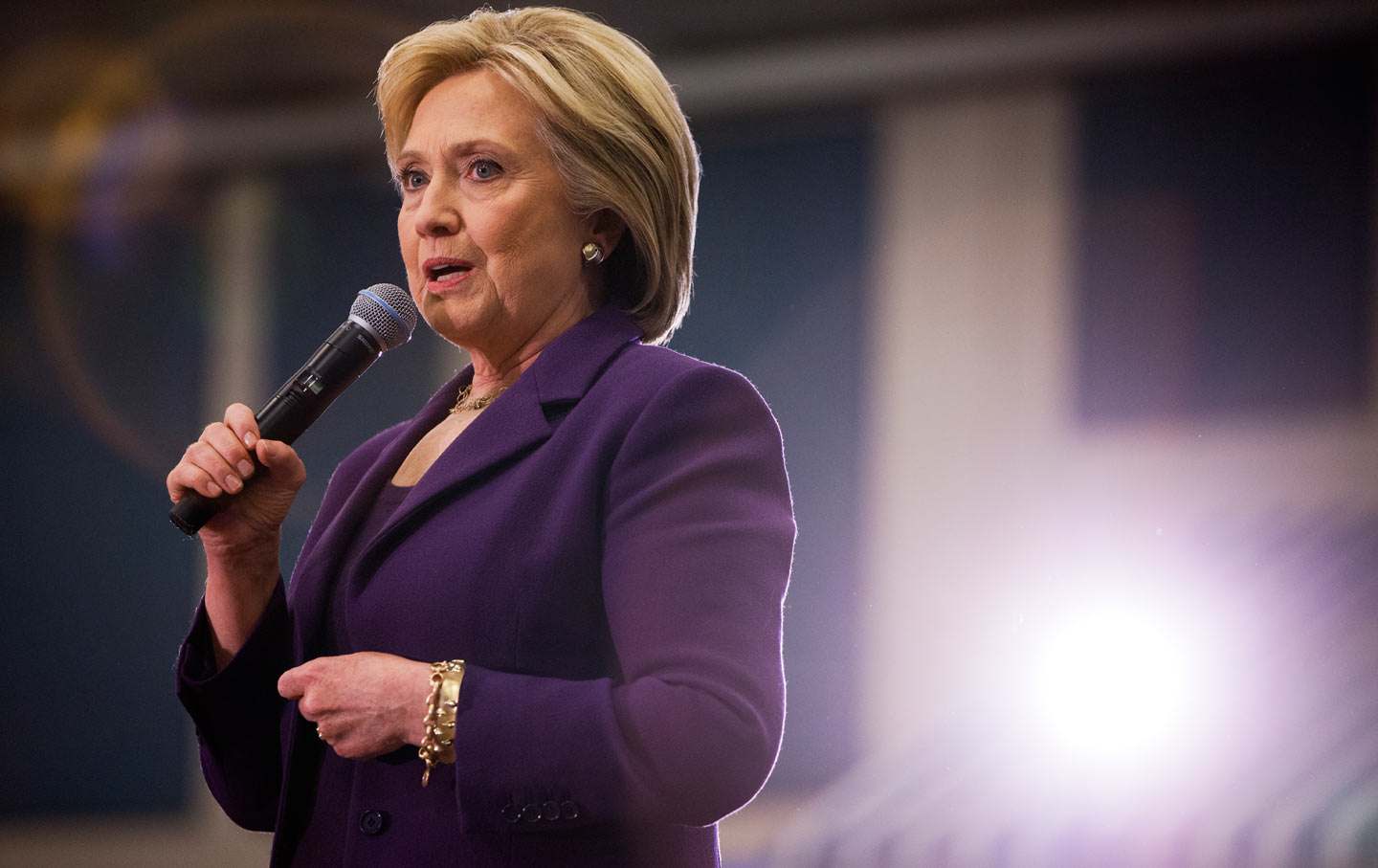 In Sunday’s Democratic debate, Hillary Clinton assailed Senator Bernie Sanders for opposing, in January 2009, the release of Troubled Asset Relief Program funds that were used in part to bail out General Motors and Chrysler. “When it came down to it, you were either for saving the auto industry or you were against it,” Clinton said. “I voted to save the auto industry.”

Sanders objected strenuously to the charge, and said Monday that Clinton “went out of her way to mischaracterize my history.” He said his vote against releasing the TARP funds was based on opposition to the Wall Street bailout and how it was conducted, and pointed to an earlier vote in December 2008 in which he supported direct help for the automotive industry.

When The Nation reached out to each senator on Monday, both Cantwell’s and Wyden’s offices pushed back on the idea that their vote was “against” saving the auto industry, and echoed Sanders’s broader concerns about what was happening at the time with TARP money. Shaheen’s office did not reply to several requests for comment.

“Sen. Wyden opposed TARP because it failed to provide strong consequences for managers and equity owners of failing firms,” said Keith Chu, a spokesman for the Oregon lawmaker. “In his view, the best way to prevent future bailouts was to ensure those who carried out reckless business practices and those who profited from them paid a high price for destabilizing the US economy.”

Chu declined to comment specifically on Clinton’s characterization of the vote, but did point to a contemporaneous statement from 2009 in which Wyden said he opposed releasing remaining TARP funds because “compensating—with hundreds of billions of taxpayer dollars—the very investment bankers who took these outrageous credit risks is no way to restore confidence in our markets or the federal government.”

Chu also noted that Wyden supported the 2008 bailout of the auto industry. (Wyden was on a plane during the vote, which was hastily called, but released a statement at the time saying he would have supported it.) Wyden endorsed Clinton in January.

Cantwell’s office also declined to directly enter the fray between Clinton and Sanders, but a spokesman directed The Nation to 2008 statement where Cantwell explained why she opposed TARP: “I am not supportive of a structure where the government only gets companies’ bad assets.”

The spokesman also stressed that Cantwell, like Sanders, supported the stand-alone auto bailout in December of that year. Cantwell is supporting Clinton in the primary.

While Shaheen’s office did not respond, her statement from January 2009 is very similar to Wyden’s and Cantwell’s remarks—and those of Sanders. “I do not favor the release of additional TARP funding at this time. We already have spent $350 billion on this program, and before we agree to an additional $350 billion, I believe taxpayers deserve a full accounting of the money already spent and to know whether the program is working,” Shaheen said on January 15, 2009.

Shaheen has been a very visible Clinton supporter, often stumping for her at events throughout New England. She was not yet in office for the December 2008 auto bailout vote.

The history of what happened is complicated, but is important to understanding the current dispute. In December 2008, President George W. Bush asked Congress for a $14 billion bailout of General Motors and Chrysler, which were both on the brink of failure. Nearly everyone in the Democratic caucus, including Clinton and Sanders, supported the request, but it failed to pass the Senate.

Bush then announced that he would use $17.4 billion in funds from TARP, which was authorized two months earlier, to help the companies. Bush’s plan directed $13.4 billion to the auto industry right away, and the remaining $4 billion when the second half of the TARP funds were released.

The first $350 billion of the $700 billion in TARP funds had already been spent, and language in the TARP bill gave Congress an opportunity to block the release of the remaining $350 billion. By late 2008 and early 2009, many members wanted to do just that—at least until there were changes in how the money would be spent. Democrats and Republicans were almost universally outraged at the reported bonuses paid out by bailed-out companies like AIG, which had offered 13 executives $3 million to $4 million bonuses each.

Many Democrats were also upset that not much of the money was going to help distressed homeowners, as the Bush administration originally promised. The Government Accountability Office was also unable to give Congress too much clarity on how the administration was spending the money.

“The refusal so far to use the money for that purpose of [foreclosure reduction] has been, I think, a violation of the intent of the bill,” an angry Barney Frank said at a hearing in 2008.

“You don’t have a comprehensive plan to deal with foreclosures [and] until you do, please don’t come here and ask for another penny. I will work 24 hours a day to make sure you don’t get another dime,” Representative Maxine Waters told Treasury officials that day.

But in January 2009, only days away from taking office, Obama asked Bush to request the release of the remaining funds, and promised better oversight and more help for homeowners. Republicans in Congress opposed the release, but most Democrats went along, though often grudgingly. Then-Senator John Kerry told reporters he would not vote to block the rest of TARP, but that “there is a lot of interest up here in finding out what happened to the 350 [million dollars] that has already been spent.”

Sanders and that handful of Democrats nevertheless voted to block the funds. At the time, Sanders released a statement saying: “I have deep respect for President-elect Obama and I very much appreciate the difficult job he has in trying to remedy the economic damage done by the Bush administration’s reckless policies. Nonetheless, I have strong reservations about continuing this bailout without strong taxpayer protections written into law. I also object to using middle-class taxpayer money to bail out the exact same financial institutions whose greed and recklessness led to the greatest financial crisis since the Great Depression.”

The vote to block remaining TARP funds failed, and the money was released. Since some of it indeed went to the auto industry, Clinton is arguing that Sanders—and, by implication, the rest of the senators who opposed releasing the funds—were “against” help for the auto industry. “If everybody had voted the way he did, I believe the auto industry would have collapsed, taking 4 million jobs with it,” Clinton said.

Those senators obviously have a different view of the vote today, and none of them mentioned the auto industry in their remarks back in 2009.

One dimension of the debate is whether the senators even knew for sure at the time the money would go directly to the auto industry. Larry Summers, Obama’s economic adviser, said in a letter to Congress ahead of the 2009 vote that the auto companies would “only receive additional assistance in the context of a comprehensive restructuring designed to achieve long-term viability.”

The Clinton campaign directed The Nation to January 2009 remarks from then-Senator Russ Feingold, who also voted to block the TARP funds, but stated clearly he believed the money would boost the automotive industry. Feingold said, “I fully expect this second $350 billion for the financial bailout to be approved, and if it is, I certainly expect that the promise of additional financial backing for the automobile industry, and the millions of jobs associated with it, will be forthcoming.”

Senator Debbie Stabenow of Michigan, a Clinton supporter, also said this week that “A lot of folks said we shouldn’t do it because somehow it was helping the banks. It was the auto bailout we were talking about. I was very clear with colleagues that we had to do this.”

The Clinton campaign did not directly respond to questions about whether Senators Wyden, Shaheen, and Cantwell were also taking a stand against helping the auto industry in 2009.