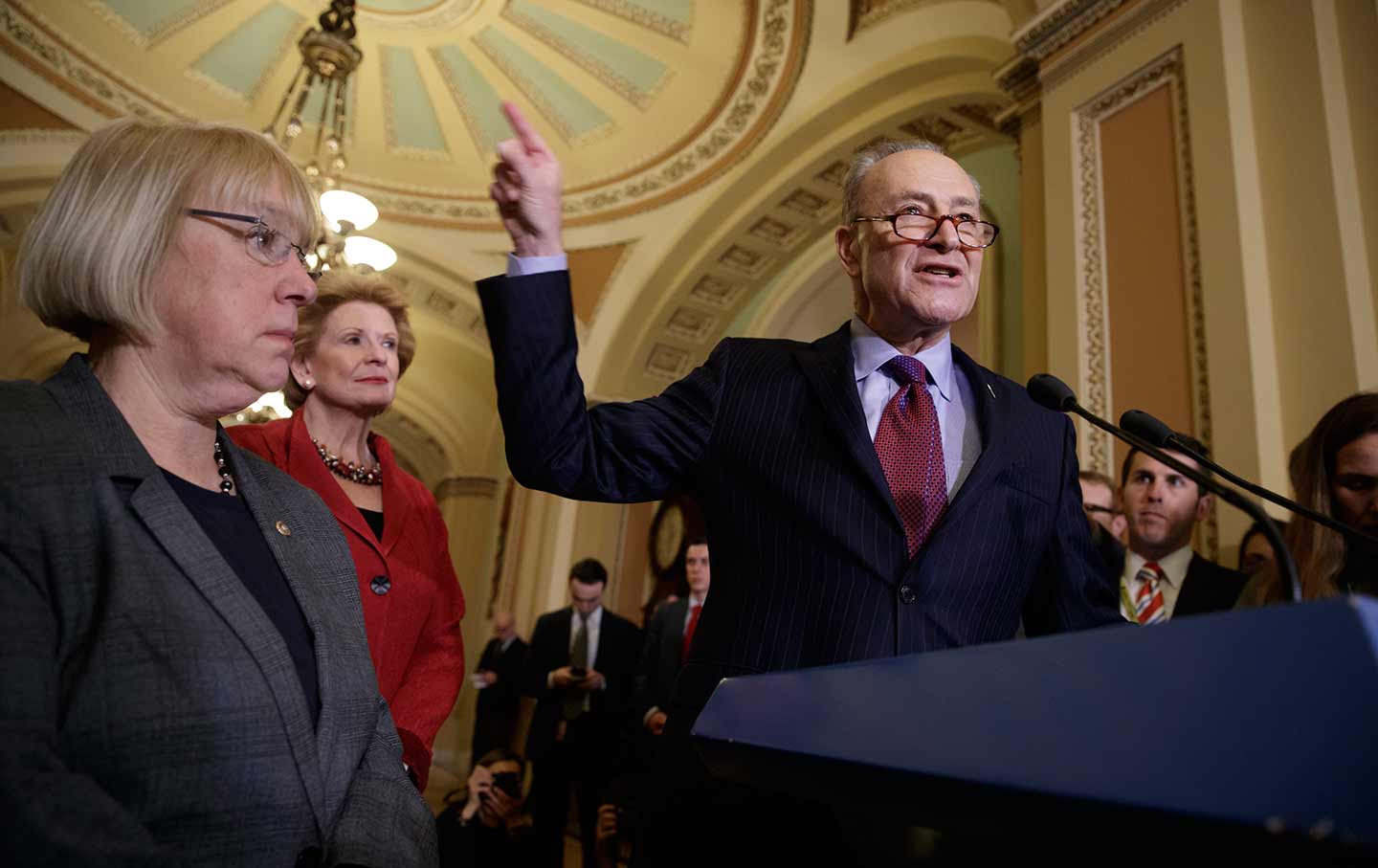 Strip away the wigs and makeup (that’s a metaphor), and on economic policy Donald Trump resembles the same tax-cutting, deregulatory Republican we’ve been inured to for decades. Every time you think Trump breaks the mold—like when he vowed on the campaign trail to allow Medicare to competitively bid for prescription drugs—it takes all of five minutes with drug company CEOs for him to suddenly become an evangelist for speeding up FDA approvals. This is Heritage Foundation conservatism, only a bit louder.

So you would expect that Trump’s signature executive order on deregulation would offer an important window into the next four years. But it’s actually nothing more than a meaningless paperwork generator, window dressing masking the real process Republicans will use to hack away at federal protections.

The headline news on the executive order claims that every new regulation adopted by a federal agency must be accompanied by the removal of two regulations. Other countries have similar “regulation budget” setups.

But there are all sorts of caveats. First of all, Trump has already promised that he wouldn’t accept any new regulations anyway. “If you have a regulation you want, No. 1, we’re not gonna approve it because it’s already been approved probably in 17 different forms,” he said during the signing ceremony. If zero new regulations get approved, zero need to be revoked.

Second, the executive-order text doesn’t call for revoking two rules for every new one. It just says those two rules must be “identified for elimination.” The cost to businesses of any new regulations must be offset (it’s unclear whether the benefits will be taken into account or how “costs” will be defined), but only “to the extent permitted by law.” In other words, the order respects “the authority granted by law to an executive department or agency,” referring to laws passed by Congress that direct agencies to write rules. If a regulation exists in the statutory code, it cannot be countermanded, regardless of this order.

In addition, all revocations of rules would still have to go through the Administrative Procedures Act process, which can take years and require agencies to come up with a plausible reason for revocation. An agency cannot ignore its mission or the plain text of the law to satisfy an arbitrary order. Lawsuits would almost certainly ensue if any agency trotted out this process to kill a rule.

Plus, the order doesn’t apply to independent agencies, which includes nearly all of the agencies writing rules under the Dodd-Frank financial reform. Trump may want to do a “big number” on Dodd-Frank, but this order practically can’t touch it.

There isn’t even any consistent definition of a “regulation” in the order: That will have to be determined by the director of the Office of Management and Budget. And OMB can exempt entire categories of regulations at will.

For all these reasons, I doubt that a single regulation will ever be revoked under this procedure. However, just the process of identifying rules and determining costs adds another layer of bureaucracy to the regulatory process, which is the intended goal. It’s a gimmick, but one that sends a message.

The real deregulatory process began in the House of Representatives today. Under a little-used law called the Congressional Review Act (CRA), any “recently finalized” regulation can be marked with a resolution for disapproval in both chambers of Congress. These resolutions only need a majority vote in the Senate, so no filibuster can stop them. If signed by the president, the regulation goes away, and furthermore no regulations in “substantially the same form” can ever be instituted without congressional approval.

This tactic, which has only been used once in history (to knock out a workplace ergonomics rule in 2001), can become useful after a transfer of power, when a willing president wants to nullify last-minute rules by their predecessor, and Congress agrees. Those stars have aligned, giving Congress the opportunity to act on any Obama final rule submitted on or after June 13 of last year.

There is a time limit to this; Republicans only have 60 session days to complete any CRA resolutions. That’s likely not enough time to take down all the 50-plus major rules and hundreds of smaller ones eligible for this action. So Republicans have to pick and choose. And this week’s House register shows that they’re choosing mostly to help polluters continue to harm the landscape.

The stream protection rule prohibits coal mining operations from dumping their waste into nearby waterways. The House approved rescinding that Wednesday on a party-line vote. A methane rule similarly forces companies to capture methane pollution, a greenhouse gas nearly 25 times as potent as carbon dioxide, rather than dumping it into federal or tribal lands. Republicans frame these as job killers, but the plain intent is less-hazardous land and water. So of course, they’re first on the list for elimination.

Another rule affecting the pollution industry, the “resource extraction rule,” will get a CRA resolution this week. This SEC regulation forces oil and gas companies to reveal any payments they make to foreign governments. This anti-corruption measure, which mirrors ones imposed by nearly all countries with resource-extraction operations, would reduce illicit financial flows through the oil and gas sector. But the polluters don’t like it, so off it goes. Of all the special interests clamoring for deregulation, the resource extractors are first in line.

Two other rules, a “blacklisting” rule requiring federal contractors to disclose previous labor-law violations (which is already under a federal injunction) and a gun rule involving information disclosures on people on disability from the Social Security Administration to the national background-check system, will get votes in the House on Wednesday.

Then, things get interesting. The Senate has a pile of work ahead of it, from continuing to approve Trump’s executive branch nominees to a Supreme Court vacancy. Plus, there’s a budget that expires at the end of April, the Obamacare repeal law through a budget-reconciliation vote, the debt ceiling, and several other matters requiring attention. The Senate can take the time to pass these CRA resolutions, but Mitch McConnell has to weigh that against getting other work done.

That makes the outcry among rank-and-file Democrats to resist the Trump regime and its allies in Congress more than a symbolic stand. We know that Senate Democrats can withhold unanimous consent, stretch out conformation votes, and make life miserable for the majority, as Republicans did to them. The CRA resolutions introduce the aspect of a ticking clock. Every delay that Democrats force in the Senate gives less time for these regulations to be wiped out, subsequently crippling future action to protect against pollution in lands and waterways, or contractor malfeasance. McConnell will eventually have to choose which regulations to rescind and which to keep, as long as Democrats don’t collaborate and let the clock run.

Resistance doesn’t just satisfy a psychic longing to stop an outlaw presidency. For the next several months, it has an end goal.