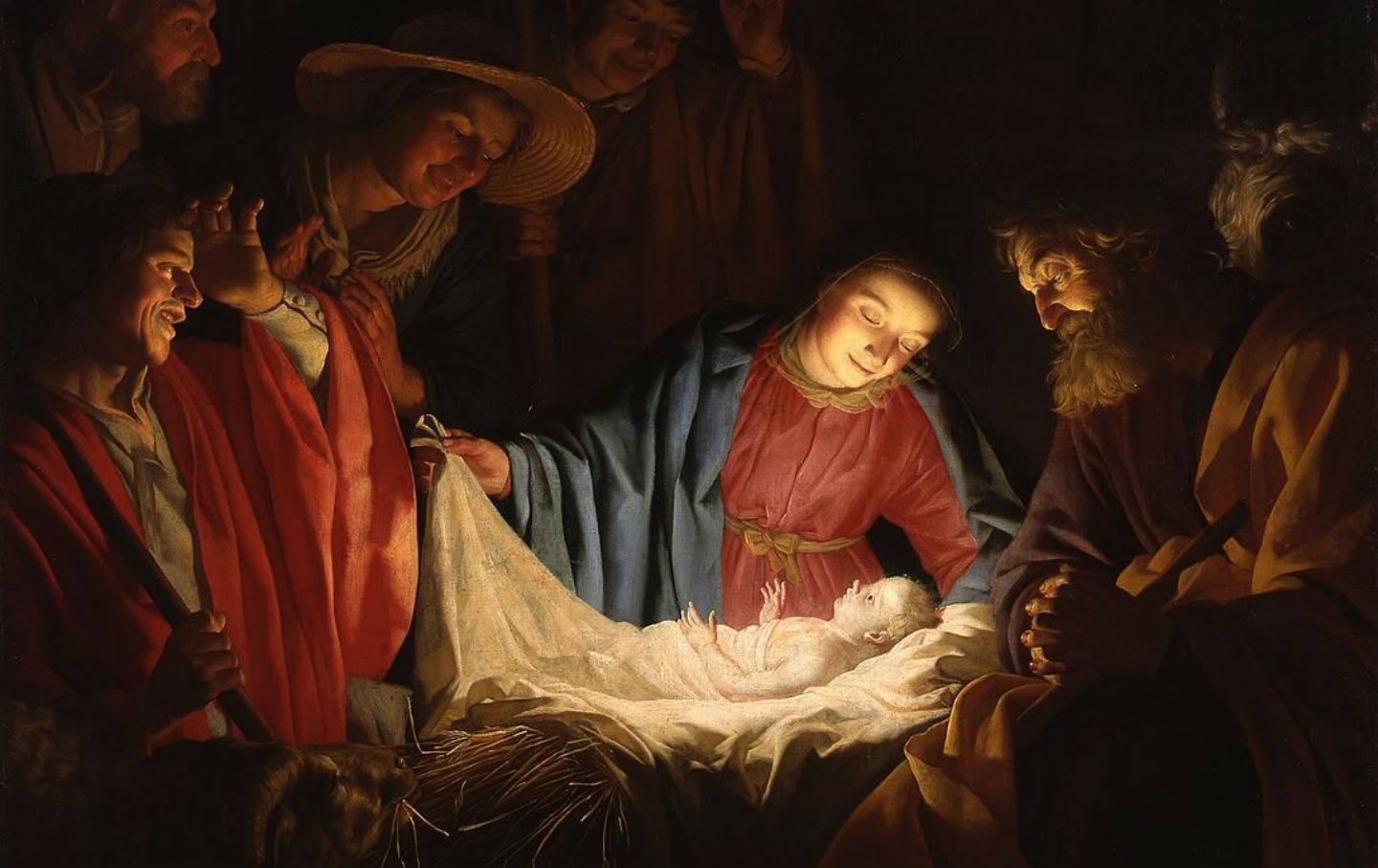 The Adoration of the Shepherds, depicting the birth of Christ, painted by Gerard van Honthorst in 1622. (Wikimedia Commons / Google Art Project)

On this day in the year 1, or so says our calendar, Jesus Christ was born. One thousand nine hundred and nineteen years later, a pastor and religious writer named Allan A. Hunter wrote an article for The Nation, “A Christmas Pilgrimage,” about a visit to Bethlehem shortly after the end of World War I.

It was Christmas morning. I was looking for the light of quiet healing, the brightness of good-will, that should usher in the friendly open hand in place of the old, clenched, shaken fist, for there had come upon me the memory of friends I would not see again, friends who had thrown away life in their faith that the nations would murder each other no more. So I went to the place where the Prince of Peace was born and watched the worshipers of clashing sects rattling their incense and reciting their prayers. But there was no healing, no brightness of good-will in the cave under the great Church of Nativity.

I walked up the twisting cobbled street, past a group of Bethlehem boys playing marbles—with dried figs—and came, half a mile from the town of small white houses, to the field of the shepherds. I crossed the open space of barley stubble and stood beside the grove in the center, where they say the shepherds watched their flocks by night. I saw the “little gray leaves” of the olives twinkle and flash in a radiance of sunshine that smashed the clouds to pieces. A flock of goldfinches overhead were jubilant and generous with delicate bits of song. Yes, both heaven and nature sang. But neither had more to say than did the bleating sheep or the moss that clung to the ruined wall.

Five miles back on the Arab pony to Jerusalem and St. George’s. As I entered the cathedral door I said: “Here at least in this holy place (why, right over there through the window, is the little green hill of Calvary), here will ‘shine the Infant Light.’” And to be sure, the vaults of the great church did ring and thrill as five hundred soldiers chorused “Hark the Herald Angels Sing.” Those men stood stiff and true as they sang. They had fought a good fight. Every brass button, every inch of leather on Sam Browne belt and bandolier, every spur was polished and shining. There was, too, many a glorious ribbon above the heart that spoke of gallantry and valor. But I went away from that church unsatisfied still. They had knelt in awe and wonder. They had sung “Noel, Noel.” The light of “a little strange star” had shone upon them—for a passing moment. But would that light last? Would those men rise from their knees and go out from the holy place not only to hate the hideous waste of war, but to love the cause of peace, to love it with such a holy flaming passion as they had loved their country and their king?

There was no telling. I could only remember that those of us who feel we have the light of a new day in our eyes might never see that day. It might be that some of us would have to go down to another hell of bursting bombs and shells, of bullets, of gas that twists the human face into inhuman shapes of agony, to the dreary, hopeless tedium of the trenches, and the mad resentment against the powers of this world.

Not too jubilant that Christmas morning I returned to the orphanage up on the westernmost hill of Jerusalem, the orphanage that the American Red Cross had taken over a few months before from Pastor Schneller, the kindly, gray-haired German missionary who had given all he had to the fatherless children of Palestine. Here they were: hundreds of Syrian youngsters, mastering a trade in the apprentice shops, or learning to eat real food once more. It was dinner time. I went into the big orphanage kitchen to say Merry Christmas to Hilweh, the cook. She was ac­tive and smiling and radiant as always, and because this was Christmas day she was wearing the steeple-like head­dress of white muslin and the beautiful crimson and purple and blue embroidery on her breast that Bethlehem women wear. Hilweh seemed glad at her task, glad to be working as she stirred a huge wooden spoon in a brass pot. That mother of the strong arm and radiant face (she was mother to all the orphans, though she would have no fooling in her kitchen) was a Mohammedan, and too old, I suppose, to change her creed. Those whom she fed were oncoming Christian Armenians and Orthodox and Moslems who, if they had remained in their villages, would now be quarreling one with another, faith against faith, grudge against grudge. But here Mohammedan Hilweh doled out bread and lentils to Turk and Christian alike, and here this Christmas morning I found among her and her charges what elsewhere I had missed—Bethlehem.