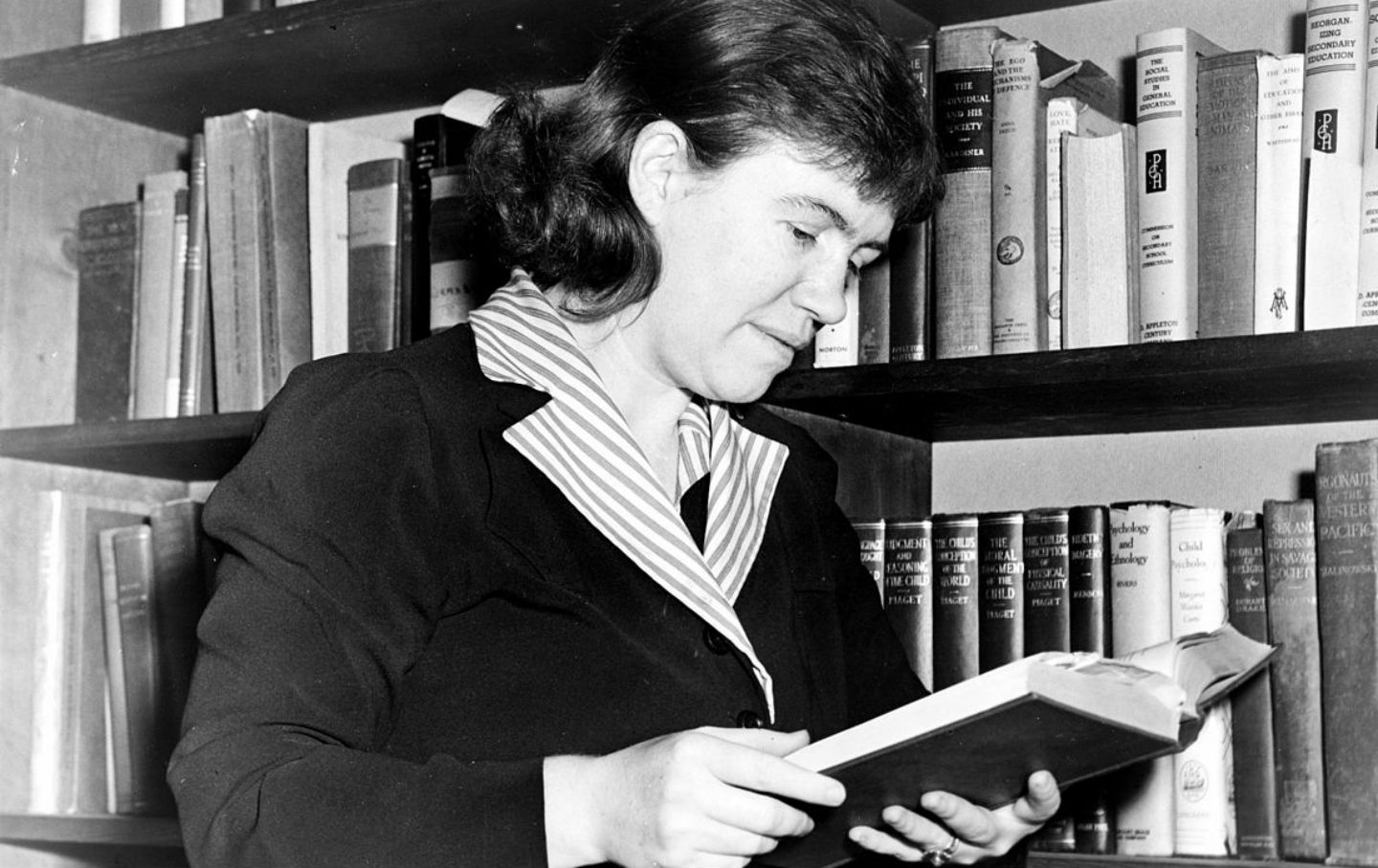 The anthropologist Margaret Mead was born on this day in 1901. Her most famous book, Coming of Age in Samoa, explored the social, psychological, and sexual development of teens on an island in the South Seas. It was reviewed in The Nation in 1928 by then–managing editor (and later editor and publisher) Freda Kirchwey.

Somewhere in each of us, hidden among our more obscure desires and our impulses of escape, is a palm-fringed South Sea island that looks very like the picture on the butcher’s calendar—sea, sand, sun, a languorous atmosphere promising freedom and irresponsibility. It is to that island that we retire when we grow bored and confused by jobs or political campaigns or city life or—more particularly—with husbands, wives, or children. Thither we run to escape conflicting standards, the difficulties of an age without faith; to find love which is free, easy, and satisfying.

When you read “Coming of Age in Samoa”—as you should do—you will probably be astonished to discover how like a South Sea island that South Sea island can be. Sea, sand, sun—all are there, and simplicity and absence of conflict. It is a world in which life is gay and children are not very troublesome and love is kind and uncomplicated; where food and clothes are few and easy to get. Sex experience is frequent before marriage, almost to the point of promiscuity. Jealousy is rare. Violent and possessive emotion is held to be in poor taste, but frigidity does not exist. The routine of life is simple, quiet, and unhurried.

Margaret Mead, the author of this book, spent eight months in the island of Tail in the Manu’a Archipelago of Samoa studying the psychology of the adolescent girl. She lived for much of the time as an adopted daughter in a Samoan household and became intimately acquainted with the behavior and feelings of a group of girls in a social structure fundamentally different from our own. She wished to discover whether the Samoan adolescent was subject to the mental disturbances which are considered in Western civilizations the inevitable concomitant of the physical changes of puberty. She found that the young girls in that particular island group live through no period of stress. They experience love from the time they are physically and mentally ready for it. They swallow, without pain or ecstasy, a pleasantly diluted dose of the Christian religion. They assume adult family responsibilities as a matter of course. The Western conception of the family unit composed of father, mother, and children does not exist. Instead, children are brought up in rather casual, shifting congeries of relatives living together. No single passionate parent-child relationship has an opportunity to spring up. Every adult in the household is more or less in loco parentis to every child. The older children are shouldered with the actual care of the younger ones. Thus the Samoan girl leads a busy, unconscious existence in which impulse and duty appear to play pleasantly correlative roles. Her life as well as her environment apparently fits the fantasy that has become a symbol of relaxation and release to the harried child of the machine-made West. Would we then exchange our unsatisfied desires and complicated choices for her more even progress in the world? Probably not. On closer inspection several flaws appear in that picture of warm, idyllic simplicity. The discrepancies between fantasy and fact lie at the very heart of Samoan sex freedom. In the first place personality and individual differences, the objects of such tender consideration in most Western lands, are ignored—both publicly and privately. Skill is admired; but precocity is frowned upon. In the family children have no opportunity either to become spoiled or to feel neglected and misunderstood; they are simply members of a group with certain functions to perform. Only in the dance do virtuosity and individual peculiarities win applause. Human relationships are formalized and depend little on the appeal of one personality for another. Boys and girls are so severely separated before puberty that a keen antagonism—not personal but sexual—develops and continues until it melts in the warmth of adolescent desire—again not personal but sexual. Love is expressed in the formulae of romantic attachment; but a deeply personal feeling between a man and a woman has little chance to flower. The whole basis for emotional intensity is lacking. Fidelity is treated with humor; jealousy with contempt. Even close friendships based on personal preference are absent.

A Samoan philosopher might maintain that a balanced emotional life either in adolescence or after can be achieved only through freedom from the strain that arises when individuals stress the importance of their personal feelings and preferences and abilities. Emotions can be freely expressed only when they are not intense; with intensity come conflict and jealousy and a frequent inability to express anything at all. George A. Dorsey, biologist and author of “Why We Behave Like Human Beings,” is quoted on the jacket of Miss Mead’s book as wondering “if we shall ever be as sensible about sex as the Samoans are.” Miss Mead herself is less sweeping. She believes that children in Western countries should be loosed from the entanglements of too intense parental love. But she expresses a reasonable and civilized doubt of the Samoan attitude toward personality and toward adult emotions. If love can be freed from conflict and life made simple only at the price of our cherished personal relationships, who of us is ready to pay it? Let Mr. Dorsey set out for Samoa if he will. Most of us probably will read Miss Mead’s impressive study and then continue as before to cling to our difficulties and our delights, with occasional impulses of escape to the expensive simplicity of the South Seas.