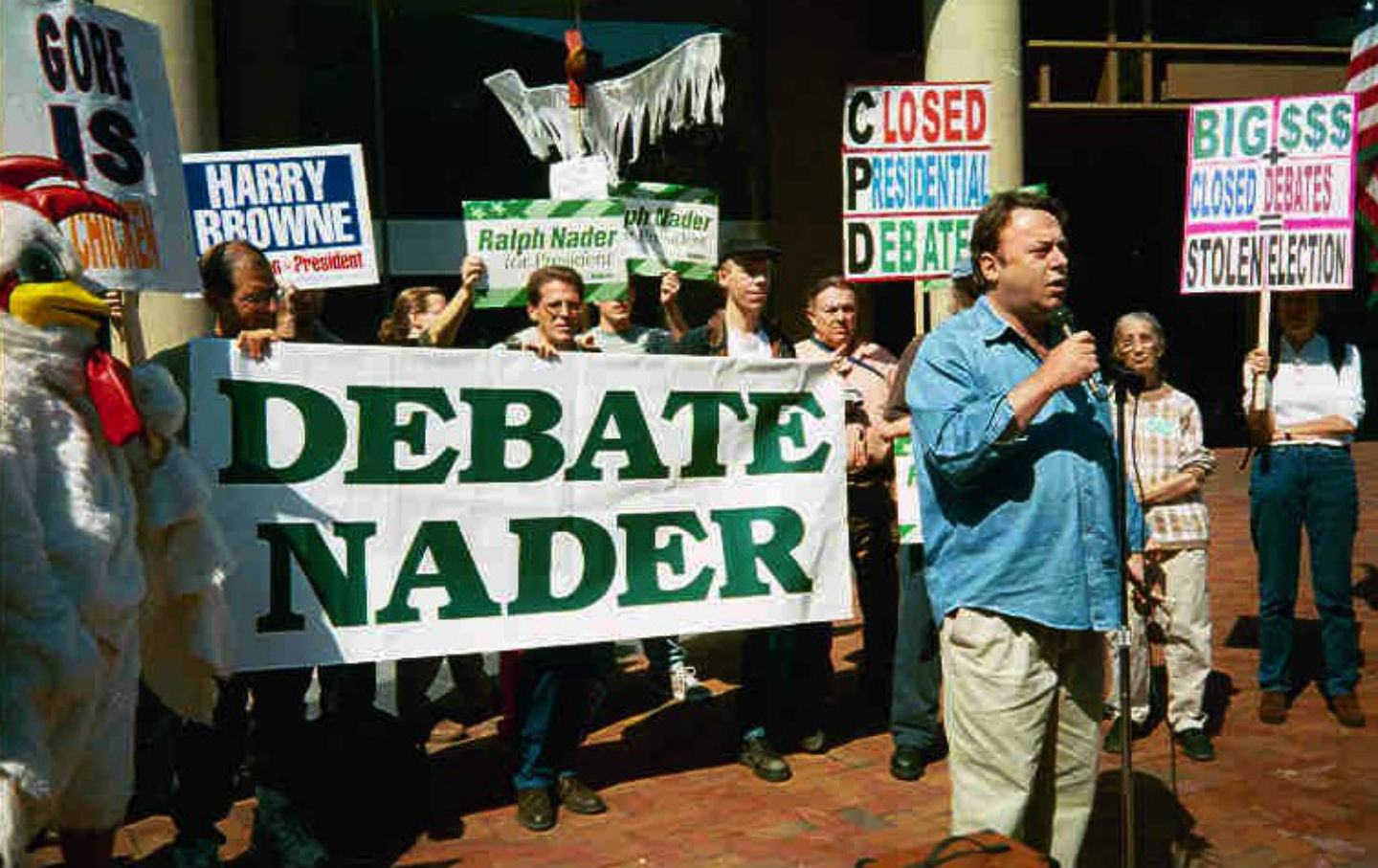 Hitchens, speaking outside of a third-party protest in front of the Commission of Presidential Debates on behalf of Ralph Nader in September 2000. (Wikimedia Commons / Carol Moore)

Christopher Hitchens wrote for The Nation from 1978 to 2002, when he resigned his long-running “Minority Report” column over what he perceived as irreconcilable differences between him and the editors regarding the proper response to the attacks of September 11 and the desirability of a war to remove Saddam Hussein from power in Iraq. Hitchens’s memoir, Hitch-22, was reviewed in the Nation of August 16, 2010, by D.D. Guttenplan. Hitchens died of cancer on this day in 2011.

No matter what he wrote when he resigned from The Nation in October 2002, Hitchens must know that exasperation with your readers isn’t a badge of oppression. But then, I don’t believe he left the left, or The Nation, for political reasons. I think he just outgrew them.

Not over Iraq, 9/11, Sarajevo or Salman Rushdie. Because even when the movement was “everything,” that was never more than half the story. There was always—always—another column of figures, charting the rise of Christopher Hitchens…. The best thing about keeping two sets of books—personal and political—is that when the columns are added together the balance is always in your favor. Which makes changing sides as easy as changing trains. But there is also a price to pay, and Hitchens has paid it. In The Balkan Wars Trotsky writes, “I was not prepared to play the role of ‘singer in the camp’ of the…warriors.” Hitchens’s disgust with Saddam was honorable, but posterity is unlikely to deal kindly with his willingness to be a singer in the camp of George W. Bush. Most of all, Hitchens has to live with the knowledge that young men went into battle with his words on their lips—and not all of them came back.…

To measure his loss, and ours, look at Prepared for the Worst, a collection of his early work published in 1988, or his superb, and sadly still pertinent, book on Cyprus from 1984. Or read his Nation column from May 2001 on Bob Kerrey’s lasting culpability for a massacre in Vietnam. Hitchens was teaching at the New School at the time, making Kerrey, he wrote, “my president”; yet the piece, incandescent with moral outrage, is never callous or crude. “If you look back on the essay that made his name,” Hitchens writes about Noam Chomsky, “you will find a polemical talent well worth mourning, and a feeling for justice that ought not to have gone rancid and resentful.” I wish Hitchens a speedy recovery, a long life and as much celebrity as he wants. But it’s the Christopher with a feeling for justice I mourn. I miss him very much.