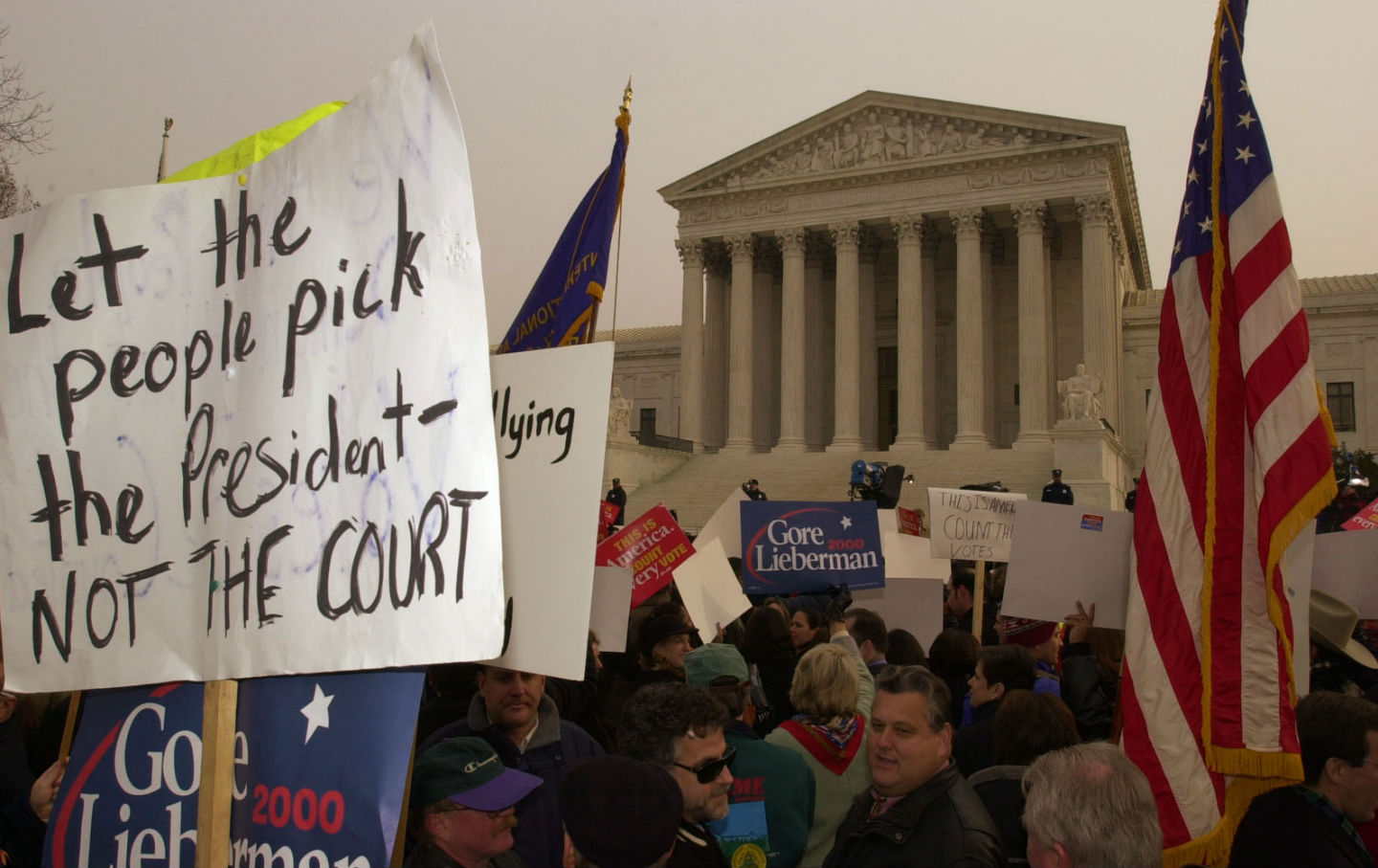 Protesters hold signs and flags in front of the US Supreme Court on December 11, 2000. The court ordered the Florida recount of votes stopped that previous week. (AP Photo)

This was the day, 15 years ago, when the Supreme Court voted 5–4 (in an anonymous decision that specifically, and uniquely, said it could not serve as precedent in future litigation) to end the recount of ballots in Florida, thus making George W. Bush the president of the United States. The late Jonathan Schell, frequent contributor to The Nation, wrote about the decision in “A Force to Reckon With.”

Tuesday’s Supreme Court decision giving the presidency to George W. Bush, delivered in the dead of night in an opaque, anonymous opinion rendered by Justices who gave no oral presentation from the bench (as they usually do) but instead appropriately snuck out of the Court building through the garage, leaves the country facing a worrisome political future. The damage done to the courts and to the rule of law by the Supreme Court’s judicial overreaching into politics and the damage done to democracy by the sudden interruption of a vote count (will the distressing, unprecedented televised image of vote-counters physically putting down ballots they had been examining become the symbol of an era?) have been commented upon by many observers. The politics of the struggle have been harder to assess. From the start, the contest presented a puzzle. Why, when the nation as a whole was prosperous, at peace and thoroughly unexcited by the candidates, each of whom belongs to the moderate wing of his party, did the two sides wage such ferocious political war?.…

It is true that the extreme actions of the Republicans during the postelection crisis did not find much active support among the people (a majority of whom consistently favored the Florida recount), just as the party’s impeachment effort a year ago failed to find such support. As we can now see, however, it is a mistake to suppose that political extremism is dangerous only if backed by popular fervor. The Republicans’ impeachment campaign failed. But their postelection campaign succeeded. The Republicans, though enjoying the slenderest of legislative margins, will, as DeLay triumphantly pointed out, be in charge of the presidency and both houses of Congress. To this, in view of the recent ruling, it’s tempting to add the judiciary. Popular support is the currency of democracy, but it is not the only currency. History shows that militant, highly organized, tightly disciplined parties can have their way even in the midst of apathy—or, perhaps, especially in the midst of apathy. Power, as the founders of this country well knew, is a mighty temptation. Money is another. Put the two together, and you have a force to reckon with.