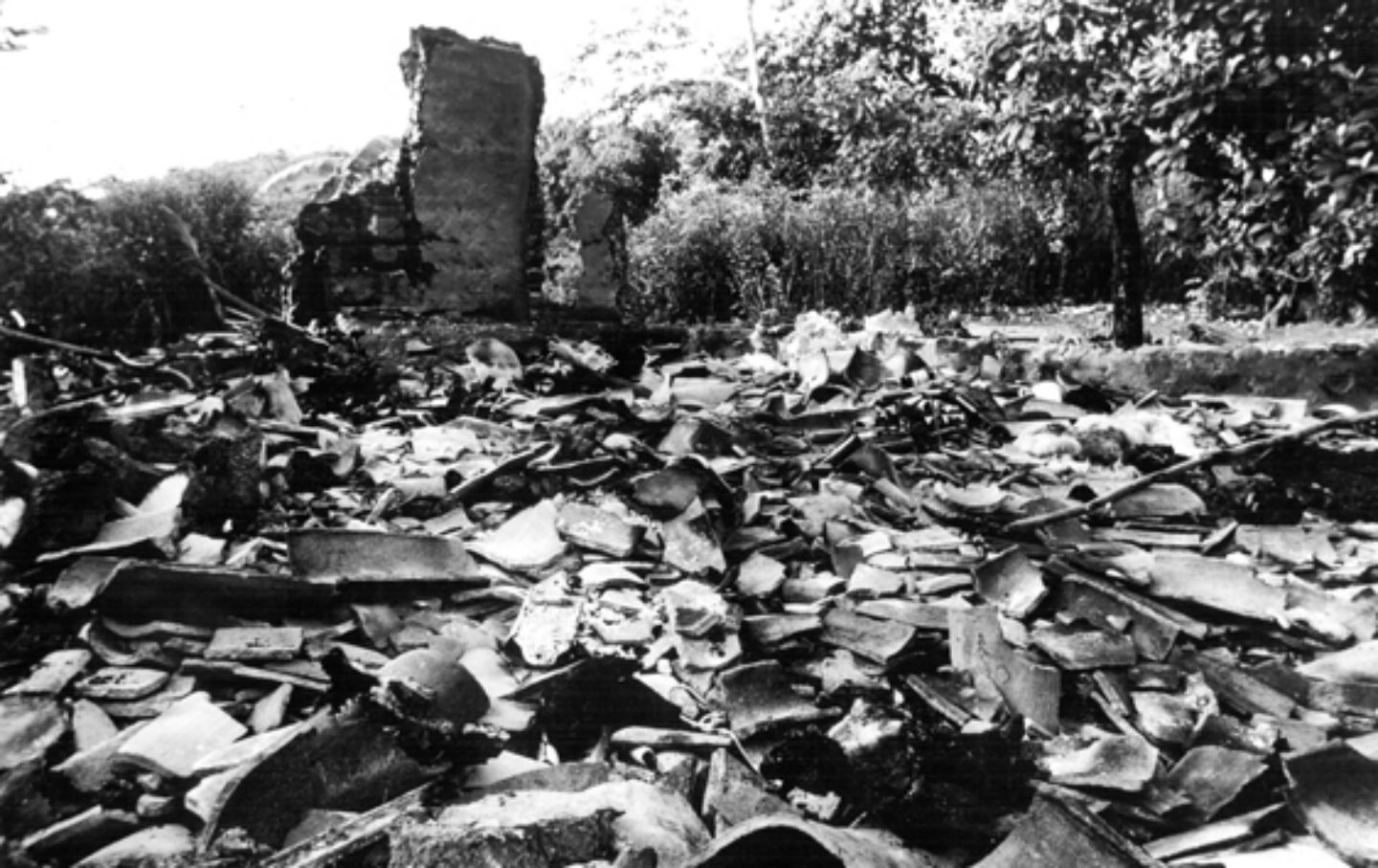 The remains of a rural Salvadoran village after members of the Atlacatl Battalion destroyed it during the massacre. (Loyola University Chicago Digital Special Collections)

On this day in 1981 the Salvadoran Army, which operated with the backing of the United States, murdered some 800 civilians in the El Mozote region of El Salvador. As the photographer Steven Salisbury wrote in “A ‘Death List’ for the Salvadoran Army,” published in The Nation a year after the massacre, the United States embassy in the country’s capital, San Salvador, knew full well that the Salvadorans were targeting civilians for murder just after the El Mozote massacre took place, but that didn’t stop President Ronald Reagan, who avidly supported the army’s campaign against revolutionary guerrillas, from assuring the public that the Salvadoran army was protecting the human rights of civilians.

Sometime before January of this year the Salvadoran Army high command apparently issued a death list targeting 462 peasants in the El Mozote region in northeastern El Salvador. Despite the fact that the death list was read and copied by senior officials in the American Embassy in Sal Salvador on January 6, President Reagan certified to Congress three weeks later that the government of El Salvador was making “a concerted and significant effort” to respect human rights.

‘I was a freelance photographer camping out with government troops at a makeshift National Guard post in a small town a few kilometers north of El Mozote. On January 3, a corporal, asking for money, gave me a leaflet written in Spanish that was being passed out to the troops. He and his comrades made it abundantly clear what it was for: the identification and location—and thus the murder—of suspected government opponents.…

The New York Times and The Washington Post on January 27 published reports that Salvadoran soldiers had massacred as many as 926 civilians in El Mozote and surrounding hamlets during search-and-destroy missions against guerrillas between December 8 and December 21, 1981. Times correspondent Raymond Bonner reported eyewitness accounts of survivors who accused government troops of the killings. One of the survivors, Cesar Martinez of La Joya, a village near El Mozote, reported that his mother, his sister and his sister’s two children were killed by soldiers. The leaflet I obtained listed a Cesar Martinez and other Martinezes under a grouping of hamlets that included La Joya. The list also contained the names of at least eight other people killed, according to the El Salvador Commission on Human Rights.

The El Mozote massacre, of course, may have been a more-or-less indiscriminate event in which hundreds of people not on any death list were gunned down. But the fact that soldiers on the same operation in the same part of the country had a list of “subversives” whom they vowed to kill suggests that there may have been something systematic about the army’s killing of large numbers of civilians….

Before President Reagan again certifies El Salvador’s commitment to human rights, he ought to demand that the State Department determine just how many names on the death list correspond to those 926 civilians reportedly murdered in the December massacre, and whether any of them have been killed in the year since.