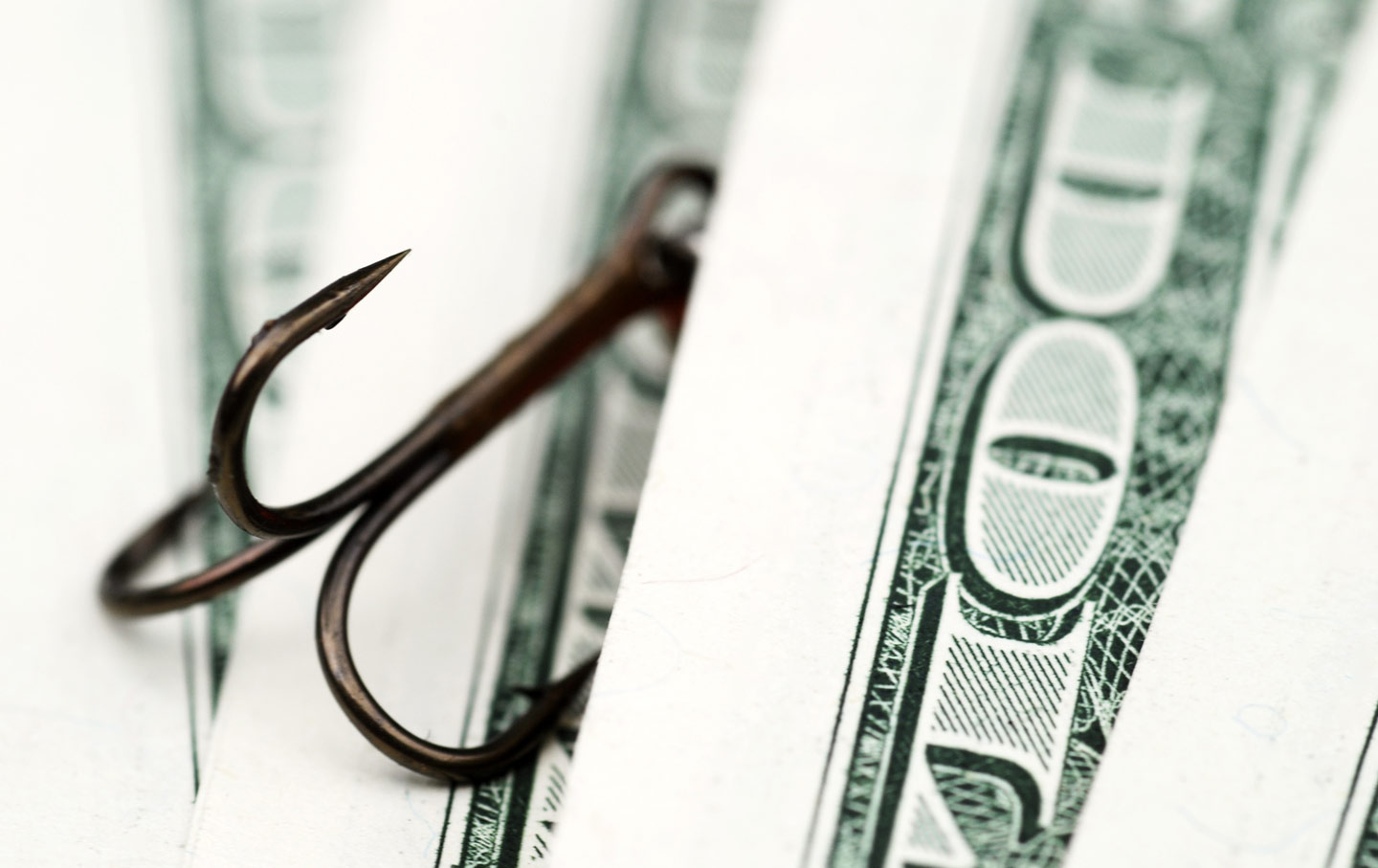 A midnight call from a stranger, threatening to ruin your finances, throw you in jail, and make your family’s life hell, if you don’t forfeit a chunk of your bank account. Before you call the cops to report a mob shakedown, beware: the shady voice on the line could actually have the law on its side. The debt-collection industry has, since the 2007 financial crisis, exploded into a massive quasi-legal racket, systematically suing consumers into financial ruin. Now community activists are pushing back against debt collection schemes in the courts, with a major settlement that could clampdown on debt profiteering nationwide.

Under the settlement in Federal District Court, involving various companies colluding in a huge debt-collection scheme, about $59 million will be paid out to individual consumers in a class of roughly 350,000 New Yorkers. They match the profile of typical debt-racket victims: mainly the poor and people of color. Beyond the hefty award, the lawsuit has helped expose what advocates describe as a reign of financial terror, threatening financially distressed consumers with spurious lawsuits to basically coerce people into paying debts they did not owe them.

One target of the suit, a company called Leucadia and its various subsidiaries, was behind a debt-collection network known for so-called “sewer service” practices—essentially trapping victims by filing affidavits falsely claiming they had been served a notice of a lawsuit. The debt collector could then win a default judgment against them, sight unseen. The defendant might only become aware of the charges when they, for example, got rejected for a job due to a freshly ruined credit score, or noticed their paychecks being surreptitiously docked by collectors.

“They were lying to the courts, they were getting judgments, and then they were wreaking havoc on people’s lives by freezing their bank accounts, garnishing their paychecks, having these judgments deny people an opportunity at an apartment or at a job,” said Susan Shin of the New Economy Project, which worked with MFY Legal Services and Emery Celli Brinckerhoff & Abady to litigate the class action.

The settlement will provide restitution primarily to about 75,000 individuals and eventually vacate default judgments for another 195,000 people. Notably, the suit tackled the entire debt-collection infrastructure, from the Leucadia network to debt-collection law firm Mel S. Harris & Associates, which recently folded, to the process-serving agency, Samserv. The companies represent various facets of a byzantine debt-collection industry that has boomed since the early 1970s. Between 2006 and 2009, the top debt-buying firms acquired “90 million consumer accounts for about $143 billion of consumer debt,” according to the Center for Responsible Lending (CRL). Though debt sales primarily originate with the big banks, debt-collection schemes have become the rinse cycle for newer financial traps post-Recession: credit card debt, primarily, along with “student loans, medical debt, utility and phone bills, tax liens, car loans, and mortgage and auto deficiencies.” As predatory collection agencies encircled these debt loads, consumers filed some 200,000 complaints to the Federal Trade Commission (FTC) in 2013 alone.

The debt-collection industry has exploded into a massive quasi-legal racket, suing millions into financial ruin.

The comments on the FTC’s consumer advice website describe common harassment tactics used by firms claiming to represent creditors or the government. One commenter lamented: “I have been called recently telling me they are going to arrest me, they are having a judge collect etc. etc. They then called work! I am afraid to answer… even though I know they are performing illegal activity, just don’t have the energy.”

A bigger nightmare awaits in court. By filing tactical lawsuits, CRL says, debt racketeers weaponize civil courts to acquire “more powerful tools to collect on the judgment, including wage garnishment, bank account seizure, and property attachment.” As debt collectors mass-produce opportunistic robo-suits, “courts around the country are overwhelmed by a flood of cases filed against consumers.” Lawsuits are culled from debt portfolios purchased “as is,” often containing “account information [that] is inaccurate, outdated, or missing, particularly if the debt is resold multiple times.”

Meanwhile, defendants are often too poor for a lawyer. According to a study of 180,177 debt-collection cases filed across New York City in 2007, MFY found that under 9 percent of defendants showed up in court; the rest went without a fair hearing.

In one case study, a man was targeted over Capital One debts, accused of having being served with a lawsuit over a decade earlier, “in 1994 at an address where his sister had once lived, but where he had never resided,” with a summons supposedly taped to the unknown door, confirmed by a phantom neighbor.

A plaintiff in the New York lawsuit, Rea Veerabadren, a middle-aged nanny, fell into a legal vortex when a process server claimed legal papers had been left at her apartment with an unknown Mr. Victor. With a court’s help, her bank account was frozen and her finances eventually seized by Mel Harris. Following the settlement, Veerabadren told The New York Times, “Maybe one day I will be able to forget, but this was the worst time of my life.”

“These debt collectors were doing an end run around people’s right to due process… which gave them astounding enforcement powers where they could seize people’s money by force,” Shin says. The settlement won’t change the law, but strikes a blow against the state’s debt-profiteering industry. Going forward, Samserv has also agreed to get out of the consumer debt business and to revise its payment schemes to remove perverse incentives for agents to orchestrate “unsuccessful” collection attempts. Additionally, New York City’s Department of Consumer Affairs has revamped rules to safeguard consumers against sewer service schemes.

Nationally, advocates want the Consumer Financial Protection Bureau to expand the scope of the main safeguard against abusive debt collectors, the Fair Debt Collection Practices Act—for example, by reigning in lawsuits by requiring adequate documentation and verification of debts, and by bolstering oversight of banks’ debt sales.

Whether before a judge or over the phone, so long as debt predators are legally allowed to entrap people, the collection system remains intrinsically rigged against the poor. Dismantling the racket requires severing each link in the debt-collection chain, so that the banking industry that fueled the Wall Street crisis can no longer scavenge the financial ruins left behind on Main Street.