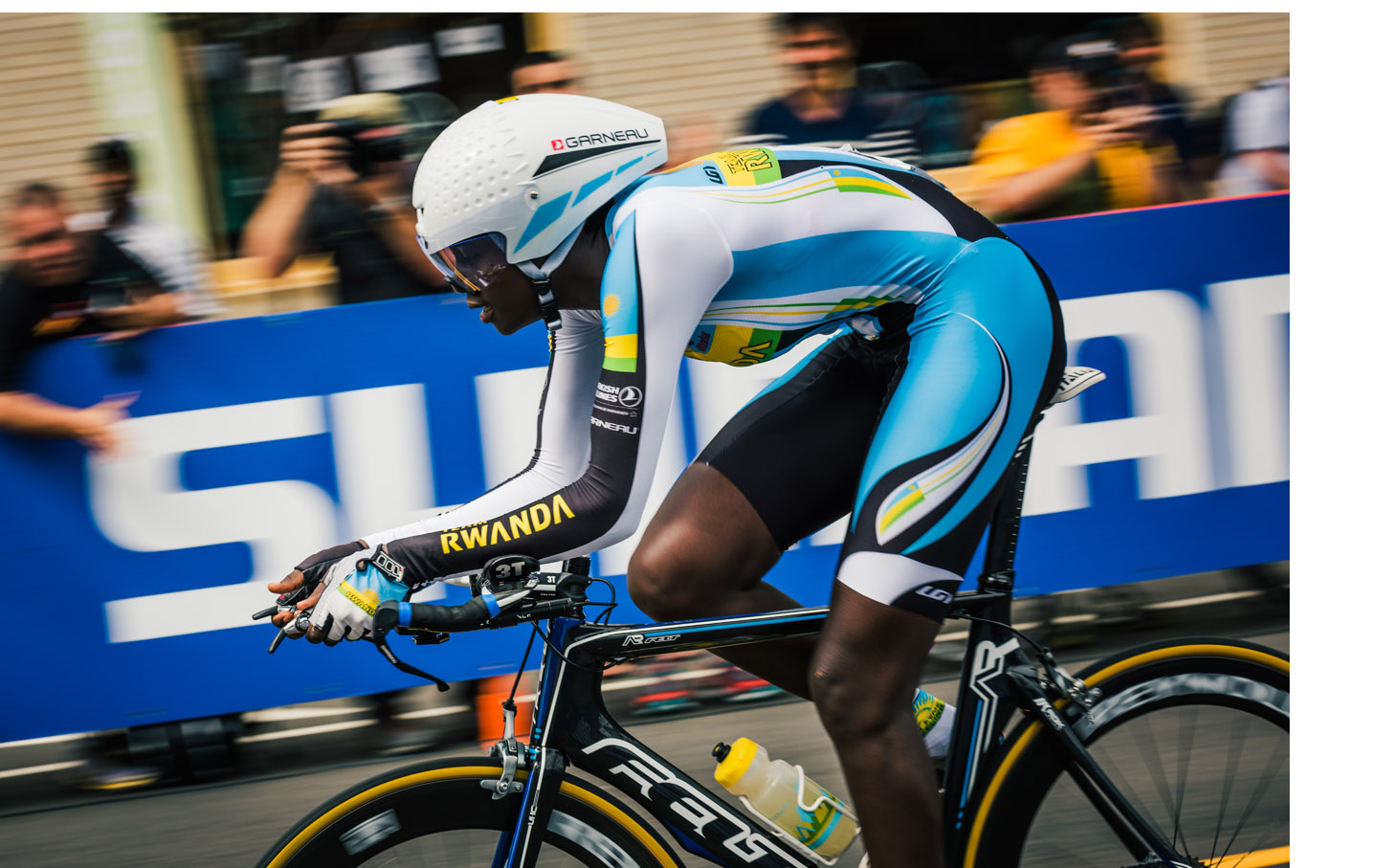 On Sunday, I asked 50 random people to give me the first thought that entered their minds when I said, “Rwanda.” All 50, without exception, answered with some variation of the word “genocide.” This speaks largely to the unfathomable horrors of what is known as “the Rwandan Civil War” between the Hutus and Tutsis, but it more strongly tells the tale of how little people in this country know about the nations on the African continent. Most are defined by tragedy, if known at all. At best, there is some knowledge of the United States’ and Europe’s complicity in these tragedies. But any sense of the positive: of the myriad strengths, contributions and accomplishments produced throughout the whole of Africa are unknown.

That’s what makes the deeply symbolic and utterly historic accomplishment of one single cyclist all the more important. Her first name, improbably and ever so cinematically, is Joan of Arc. In full, it is Jeanne D’Arc Girubuntu, and over the weekend she became the first Rwandan woman to ever race in a world competition when she competed at the 2015 Union Cycliste Internationale (International Cycling Union) Championships in Richmond, Virginia. Girubuntu was also the only woman from the entire African continent to make the cut and compete. She was one of four Rwandans (along with three men) to travel to Richmond for the race, all part of Team Africa Rising, an initiative housed in Rwanda that trains not only Rwandans, but two nations with their own recent history of conflict, Ethiopia, and Eritrea. It’s sports as a weapon of peace.

In a terrific radio piece by Catherine Komp for WCVE/PBS News in Richmond, Jeanne d’Arc Girubuntu spoke about her groundbreaking efforts:

It’s a very rare opportunity and I’m very glad that I am the first one to be able to do this and I know that by doing this I’m really opening up doors for other female cyclists within the country. It’s just not rare that I’m a female, but it is rare in itself to compete on an international stage especially with World Championships so I’m very happy that I get to be the one to do that.

Jeanne d’Arc was born in 1995, and her entire life was defined by her family’s struggles with poverty and the efforts to rebuild their lives after the 1994–95 Rwandan Civil War, until she found a home on a bicycle. Kimberly Coats, the public relations director for Team Africa Rising, blogged about meeting her in 2015.

As a young girl I remember reading the story of Joan of Arc. I loved Joan of Arc as I’m sure many young girls who read the story did. Joan of Arc was a symbol of strength and power, of religious conviction, of passionate belief, a belief you would die for. Jeanne d’Arc, Rwandan female cyclist, exuded no Joan of Arc like fierceness [when we first met]. She was pleasant, yet shy and her behavior very much in line culturally with how women, especially poor women in Rwanda present themselves. She would not look me in the eye, her handshake was a limp fish. She was a strong cyclist, you could tell, however, not so strong she would stand out beyond the borders of Rwanda.

This 18-year old Jeanne d’Arc with the “limp fish” handshake was still the Rwandan women’s national champion and won that title by an astounding 10 minutes. Coats and world-class cyclist Jock Boyer, who founded Team Rwanda in 2007, set about trying to discover just how good she could be. They sponsored her attendance at a four-week training camp in South Africa and even with that slight exposure to greater competition, training, and equipment, Jeanne d’Arc was transformed: not only as a cyclist but with a new confidence that floored Coats and Boyer. As Coats remembered, “When she returned to the Athlete House she made a beeline for me, all smiles, a big hug, a handshake and a resounding ‘HELLO!’ I looked at Jock… what have you done with Jeanne d’Arc, who is this woman?”

Within days, Jeanne d’Arc competed in the Women’s Road Race Olympic trials and missed a spot at the 2016 Summer Games by mere seconds, coming in fifth. Here is how Coats explained the transformation: “First, she stopped racing/riding to the lowest common denominator. The girls she raced against in Rwanda are on a completely different level. They’re recreational cyclists. Secondly, she raced with peers, people at her level or higher. People who had raced internationally. Finally, and most importantly, she found a place where she could speak up and be heard. She gained respect through the bicycle. It was perfectly okay to stand out, to be different and to be strong.”

In Richmond at the UCI Championships on Saturday, Jeanne D’Arc Girubuntu made history just by competing. The end result, at first glance, was far from cinematic. Jeanne D’Arc finished in last place, seven minutes behind the winner. Yet, to quote the film White Men Can’t Jump, “sometimes when you lose you really win.” Girubuntu and Team Rwanda are going to return home as conquering heroes. Cycling is a national love in their country, with an astounding three and a half million people—in a country of 12 million—lining the streets for the Tour of Rwanda race that crowns their national champions. For women, there are persistent stigmas attached to the sport that were common a century ago in the United States: the idea that a woman should not even risk cycling for fear it could wreck their ability to have children. In some corners women are also seen as somehow “not real women” if they also ride a bike. But like that other Joan of Arc, Jeanne d’Arc Girubuntu is redefining, inside of Rwanda, just how “being a woman” should be understood. Stereotypes stand little chance when confronted with the real-life brilliance of Jeanne d’Arc. As for outside of her country, Jeanne d’Arc, along with her male teammates, are attempting to forge another redefinition: They want to redefine what it means to be Rwandan beyond the trappings of tragedy.

An estimated 645,000 people lined the streets of Richmond for this race. I bet if I asked 50 people in the Virginia capital today to say the first thing to come into their mind upon hearing the word “Rwanda,” some might still say genocide, but others will instead remember a flash of speed and a bike. That’s not just about the power of sports. That’s about the power to kill smothering stereotypes by sheer force of will.