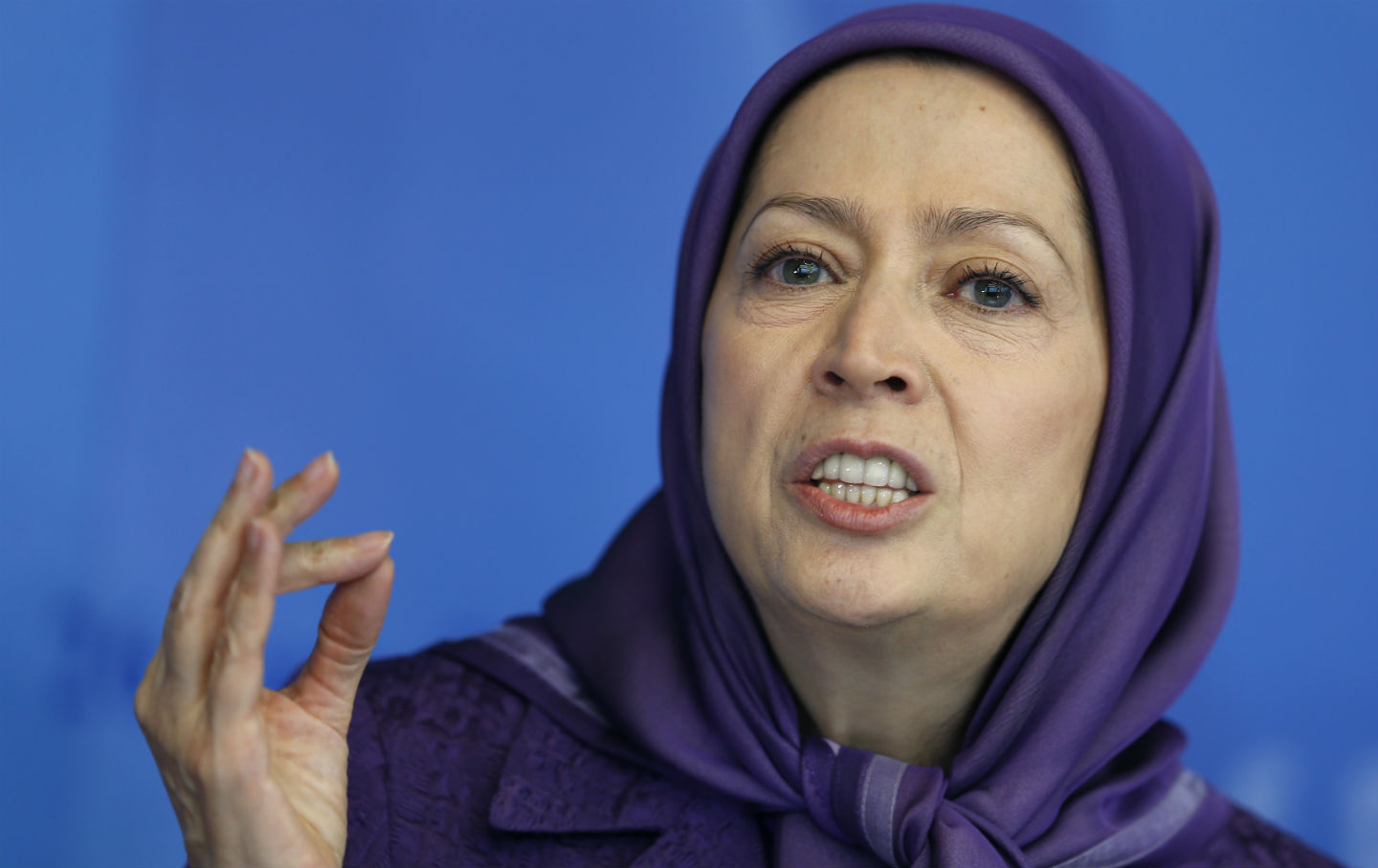 Maryam Rajavi, co-leader of the Mojahedin-e Khalq (MEK) and president-elect of the National Council of Resistence of Iran (Reuters/Vincent Kessler)

Last week, the House Foreign Affairs Subcommittee on Terrorism, Nonproliferation, and Trade announced that a controversial Iranian exile opposition figure would be testifying via video uplink at a hearing on the Islamic State, known as ISIS. What does the witness, Maryam Rajavi, a co-leader of the Mojahedin-e Khalq (MEK), have to say about the subject at hand?

Rajavi’s written testimony, a copy of which was obtained by The Nation, focuses on an unexpected way of bringing ISIS to heel: by fostering regime change in Iran. “The ultimate solution to this problem” of Islamic extremism, such as ISIS, Rajavi says in the written statement, “is regime change by the Iranian people and Resistance”—a reference to the National Council of Resistance of Iran (NCRI), the MEK’s political wing.

It sounds counter-intuitive—Iran’s aid to the Iraqi government and various Iraqi militias, after all, is widely credited with stopping ISIS’s advances there—but not when you know about the MEK’s tortuous past. Over the years, the MEK has been nothing if not opportunistic; animated by the twisted logic that the enemy of its enemy is its friend, the group seizes whatever political angle is fashionable at the moment to bring them relevance (Congress is happy to oblige). But more to the point, the MEK has always had only one goal: the overthrow of the Iranian regime. For decades, it has tried to shoehorn regional and geopolitical dynamics into its aim, irrespective of any salient connections.

The plan to bring down ISIS by toppling Iran’s government, then, is little more than the latest chapter of group’s 50-year history of monomaniacally trying to install itself atop the Iranian government. Indeed, Rajavi is testifying at Congress with the title of “president-elect” of the NCRI, which hopes to run a transitional government immediately upon the fall of the Islamic Republic.

Founded as an Islamo-Marxist revolutionary group in the 1960s, the MEK spent its early years pursuing its quixotic aims by opposing the Shah’s government with a vengeance: through student organizing, outright terrorism—including against American targets when the United States was allied with the Shah, helping to earn its 1997 American designation as a terror group—and fighting at the vanguard of the Islamic Revolution. By the 1980s, after the leader of the revolution, Ruhollah Khomeini, kicked the group out of Iran, critics were regularly deriding the MEK as a cult of personality—not least because of its continuing “wacky” behavior, as a former congressional aide put it to me for a feature I wrote this winter with Eli Clifton.

So how do Rajavi and MEK plan to end the threat from ISIS by upending the Iranian regime? That’s not so clear. But it definitely involves ignoring, despite the current clashes, the distinction between Sunni and Shia extremism—including, for example, propagandistic exaggerations like saying that “Shiite militias act more viciously than their Sunni equivalents, such as ISIS”—and pointing out several times that Iran went Islamist before anyone else. That’s about it.

It’s worth noting, however, that the MEK does have some experience in Iraq: after going into exile, its leaders gathered their fighters in Saddam Hussein’s Iraq, to take his side in the Iran-Iraq war—earning the enmity of many Iranians. After the war ended, the MEK, led by Maryam Rajavi and her husband Massoud (who hasn’t been seen in public for a dozen years), stuck around and enjoyed Hussein’s largesse, acting, periodically, as mercenaries to crush incipient uprising against the Iraqi strongman—earning, in turn, the enmity of many Iraqis.

After Hussein’s fall in 2003, the American invaders stripped the MEK of its multitude of arms. (Curiously, for a group that claims to have renounced violence in 2001, Rajavi cites in her Congressional testimony the “disarming” of the MEK as a “misguided polic[y]” that helped give rise to Muslim extremism—but not the invasion that toppled their benefactor itself.) The MEK then languished in its camps, coming under periodic attack by a murky combination of the Iraqi army and, reportedly, government-aligned Shia militias. Dozens of MEK adherents were slaughtered.

The period also marked the growth of an ardent pro-MEK lobby in the United States. As Eli Clifton and I detailed in our Intercept piece this winter, a multimillion-dollar campaign kicked into gear to remove the MEK from the US State Department’s terrorist list. Once that hurdle was cleared, the MEK—despite its cult-like practices—began to accumulate more mainstream power in Congress, where super-hawkishness against Iran is guaranteed to attract powerful bedfellows, including large amounts of pro-Israel donor money and more modest cash from MEK supporters themselves.

Meanwhile, the massacres of the MEK’s ex-fighters at its Iraqi desert bases fueled the group’s hatred of the Iraqi government led by Nouri al-Maliki, which had failed to protect them. Just as the MEK had grown close to Hussein because he was an arch-enemy of the Iranian regime, the group likewise reviled Maliki’s government, and vice-versa, for its closeness to the Iranians—the Islamic Republic had hosted and fostered Maliki’s movement in exile before the 2003 war, and supported his Shia government after its rise to power in Iraq.

When ISIS began to rip apart what was still then Maliki’s Iraq, the MEK’s prevailing logic seemed to again fall back on the enemy of its enemy. Perhaps chastened by their own labeling by the US as a terrorist organization, the group seldom uses the word “terrorism” in conjunction with ISIS. Instead, MEK propaganda refers to ISIS as “extremists,” in some instances. At other times, the language is more ambiguous: Last June, when ISIS took the northern Iraqi city of Mosul, one MEK website gave a triumphalist account of the conquest, referring to ISIS as “revolutionary forces.”

Historical revisionism of the ISIS assault started almost immediately. “These forces have taken over the Badoush prison and they had hundreds of prisoners that had been proclaimed to be terrorists and they freed them,” read a Persian-language post on the website Mojahedin.org. HRW, however, collected survivor testimonies from the prison takeover that told a different story: “After seizing Badoush Prison near Mosul, the gunmen from Islamic State, also known as ISIS, separated the Sunni from the Shia inmates,” an HRW release said, “then forced the Shia men to kneel along the edge of a nearby ravine and shot them with assault rifles and automatic weapons.”

Herein lies the MEK contradiction behind its early positions. On the one hand, ISIS, like the MEK, is militantly opposed to Iranian influence in the region. But Rajavi needs to gin up support in Washington. So she poses herself in opposition to ISIS, claiming the best strategy for fighting the marauding Sunni terrorists is to… overthrow the first regime in the region to commit blood, money and heavy weaponry to the fight against ISIS.

As ISIS became the world’s most famous terrorist group, the MEK eased its whitewash and adopted the stances Rajavi will bring to Congress on Thursday: namely, that ISIS is an extremist group—whose model and inspiration is Iran, however nonsensical that point is. That Congress would invite these ex-terrorists—Rajavi’s past prevents her from getting a visa, the reason for her video testimony—speaks ill of their commitment to shaping serious policy on either ISIS or Iran. Rajavi’s participation proved such an embarrassment that a distinguished diplomat, Ambassador Robert Ford, and another witness withdrew from the hearing rather than speak alongside her on the dais—just as the top UN official for human rights in Iran withdrew from a program last year in Canadian parliament where Rajavi was set to appear.

The MEK’s story is a tragic one of sustained failure, of being massacred and massacring, of being abused and abusing its own people, of terrorizing and being terrorized, and of a constantly morphing politics consistent only in its oddness and toxicity. That story needs to be heard, but as a cautionary tale, not as expert advice. Instead, Congress is asking one of the groups most hated in Iraq and Iran what to do about those countries’ woes. What could go wrong?