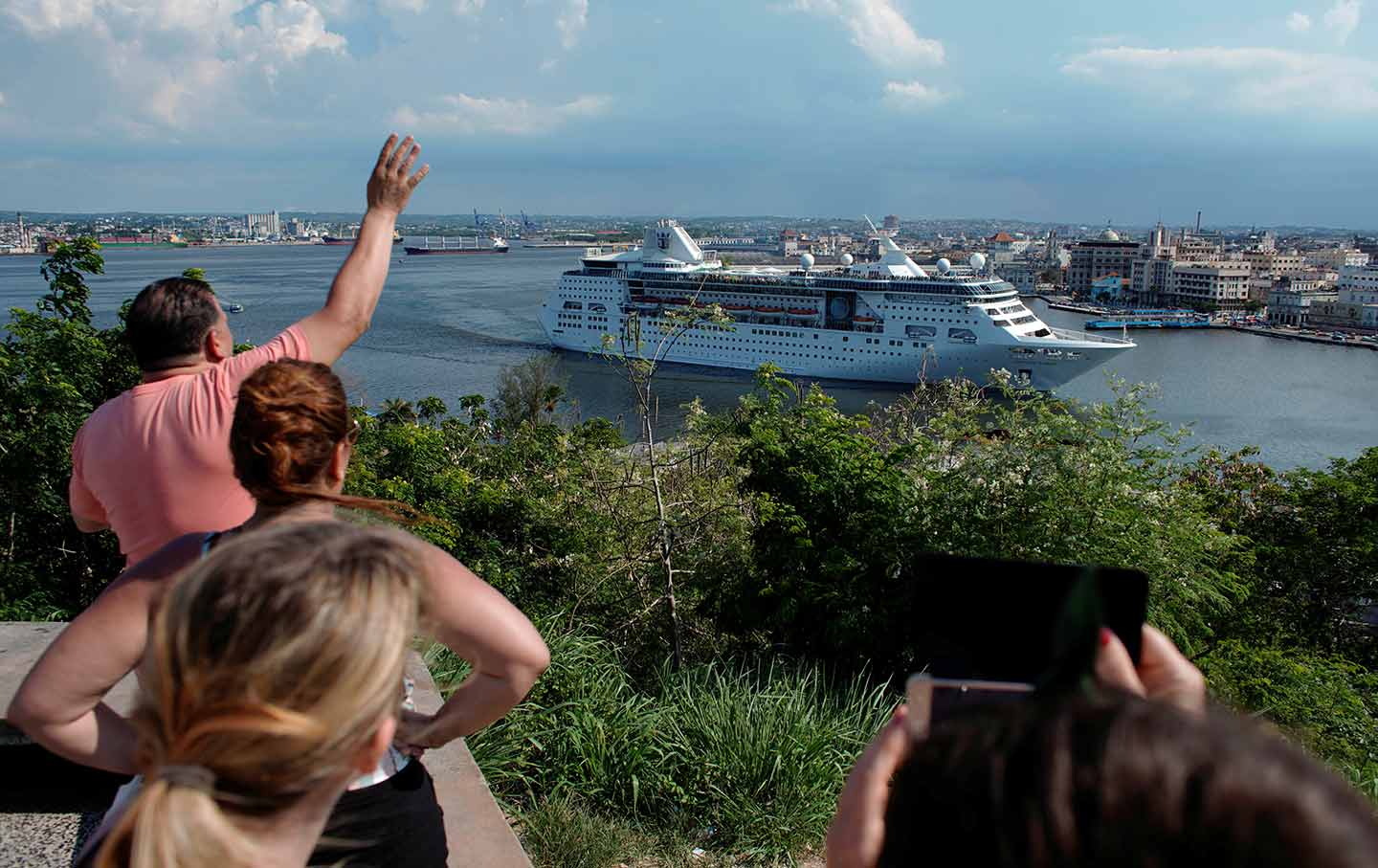 People watch the cruise ship MS Empress of the Seas, operated by Royal Caribbean International, as it leaves the bay of Havana, Cuba, on June 5. (Reuters / Alexandre Meneghini)

On August 31, 2016, JetBlue Flight 387 became the first commercial US airliner to land in Cuba in more than 55 years. With great pomp and circumstance, including a water-cannon salute, the plane lifted off from Fort Lauderdale and an hour later landed in Santa Clara. It immediately became a symbol of a new opening in US-Cuban relations, and an economic and cultural bridge between two estranged societies seeking common ground.

Since then, more than 2.2 million people have visited the island aboard around 13,500 flights from the United States, according to Department of Transportation statistics. Many have come as part of the popular “P2P” educational tours like the ones run by The Nation—people-to-people group trips authorized by President Obama as part of his historic policy of positive engagement with Cuba. Additionally, more than half a million US citizens have come to Cuba via cruise ships, which as the Associated Press reports, have “become the most popular form of U.S. leisure travel to the island.” Indeed, of approximately 630,000 US travelers who visited Cuba in 2018 (not counting Cuban-Americans who went on family visits), the majority traveled via cruise ship. And, until yesterday, those numbers were surging. In the first four months of this year, cruise lines such as Carnival and Royal Caribbean transported over 143,000 people to the island, an increase of more than 300 percent over the same period last year.

As of June 5, however, the basic freedom of millions of US citizens to easily visit a destination of their choosing no longer exists. Less than a day after Trump’s Treasury and Commerce departments declared new prohibitions on people-to-people tours and passenger-ship voyages to Cuba, Carnival Cruise Line announced that “due to changes in U.S. policy, the company will no longer be permitted to sail to Cuba effective immediately.” Royal Caribbean and Norwegian Cruise Lines also said their ships that were due to dock in Cuba this week would be rerouted. According to the Cruise Lines International Association, an estimated 800,000 passengers who had already booked trips to see Cuba will now be deprived of the opportunity to do so.

Within 24 hours, more than 50 percent of the US travel market to Cuba has simply evaporated. And the fallout is likely to increase as the Trump-provoked turmoil ripples through the travel industry, affecting educational tour providers, commercial airlines, and other tourism-related companies, not to mention the entire Cuban economy, made up of a growing number of private-sector entrepreneurs who have recently built businesses dependent on escalating US tourism. “This is a tragic blow for US citizens’ freedom to travel,” says Christopher Baker, who leads National Geographic tours as well as motorcycle and photography trips to Cuba, “and an even greater blow to the people of Cuba, a huge percentage of whom rely on income from US visitors under the people-to-people license.”

Trump officials have justified these new punitive sanctions in the coldest of Cold War terms. Treasury Secretary Steven Mnuchin said Cuba “continues to play a destabilizing role in the Western Hemisphere, providing a communist foothold in the region and propping up US adversaries in places like Venezuela.” Commerce Secretary Wilbur Ross added that it was Obama’s policy of positive engagement that had necessitated the new restrictions. “Cuba remains communist,” he said, “and the United States, under the previous administration, made too many concessions to one of our historically most aggressive adversaries.”

But the crass political calculus of rolling back the Obama-era effort to normalize relations has been clear since National Security Adviser John Bolton traveled to Miami in April to give a speech to the Bay of Pigs Veterans Association on the anniversary of the failed CIA-led 1961 invasion. Pandering to hard-line voters in the Cuban-American community, Bolton forecast the new restrictions, announcing that the administration would soon shut down “veiled tourism” to Cuba as part of a regime-change effort to purge socialist governments in the region. Since the administration is courting votes, so far it has refrained from impeding the half-million or so Cuban-Americans who annually travel to the island to see their relatives—a privilege that has been unrestricted since the first year of the Obama administration.

For the rest of us, however, the right to travel has been sacrificed on the altar of electoral politics—and not for the first time. With an eye on his reelection, in 2003 and then again in May 2004 George W. Bush similarly clamped down on a previous opening of travel under the Clinton administration in an effort to mollify the hard-line exile community and mobilize them to vote Republican in the battleground state of Florida. Between 2003 and 2005, according to Marazul Tours, travel to Cuba, at that point around 250,000 US visitors a year, fell by an estimated 80 percent.

Cuba remains the only country in the world where US citizens face such capricious restrictions on a constitutionally protected right to travel from their own government. The ability of multiple presidents to use Cuba travel as a political piñata derives from the failure of Congress over the past two decades to lift the travel ban in its entirety. Since 2002, legislation known as the Freedom to Travel to Cuba Act has been introduced in the Senate and House several times but failed to advance.

Senator Patrick Leahy—who, along with Senators Mike Enzi and Democratic presidential contender Amy Klobuchar, introduced legislation in February to end the embargo—plans to reintroduce the Freedom to Travel bill in the coming days. Trump’s egregious violation of citizens’ rights and sabotage of a sane Cuba policy may make the bill more compelling to legislators on both sides of the political aisle.

“These regulations are an insult to every American and a disgrace to a free society,” Senator Leahy stated in a sharply worded speech on the Senate floor this week. “Freedom to travel is a right. It is fundamental,” Leahy said. “It is part of who we are as Americans. We travel. We explore. We meet people. We share our values.… Are we willing to stand by and let the right to travel of private Americans be trampled this way?”

That, of course, is the key question US citizens face. To be sure, Trump’s travel restrictions portend severe economic hardship for the Cuban people—thousands of artists, drivers, busboys, maids, and small-enterprise entrepreneurs who have built businesses that cater to US travelers. Their livelihoods, and ability to put food on the table for their extended families, depend on US tourism. But Trump’s attack also targets the freedom of US citizens to explore the world and see its realities for ourselves.

Certainly, the 800,000 people who booked passage on cruises to Cuba, only to be told they are now prohibited from going, must make their voices of protest heard. Thousands of other US citizens who have previously gone on cruises and people-to-people tours but now will have a harder time revisiting the island also form a natural political constituency to lift the travel ban once and for all. The political pressure would-be travelers can bring must be magnified by multiple business interests, ranging from Airbnb to US airlines to the Marriott Hotel corporation to the travel agencies that will hopefully instruct their highly paid lobbyists to push for passage of the Freedom to Travel to Cuba legislation.

Hairdressers of the World Unite! (You Have Nothing to Lose but Your Locks… and a Community to Win)

Getting a Taste of Cuba

Cuba watchers predict, however, that Trump’s rollback of Obama’s policies of positive engagement and people-to-people programs will continue unabated until the November 2020 election, as he attempts to mobilize his hard-line base in Florida. Already, the Treasury Department has let it be known that more punitive sanctions will be announced in the coming months.

For now, the advocates of engagement with Cuba and the right to travel have vocally committed to pushing back against Trump’s efforts to return to the failed policies of the past—and assisting citizens to protest with their feet by continuing to go to Cuba. “We will take a major hit on some types of business, but we will continue to operate and navigate these new regulations,” says Collin Laverty, who heads Cuba Educational Travel, one of the largest travel providers to Cuba. “We will figure out the way to get as many people as possible down to Cuba. Where there’s a will, there’s a way.”