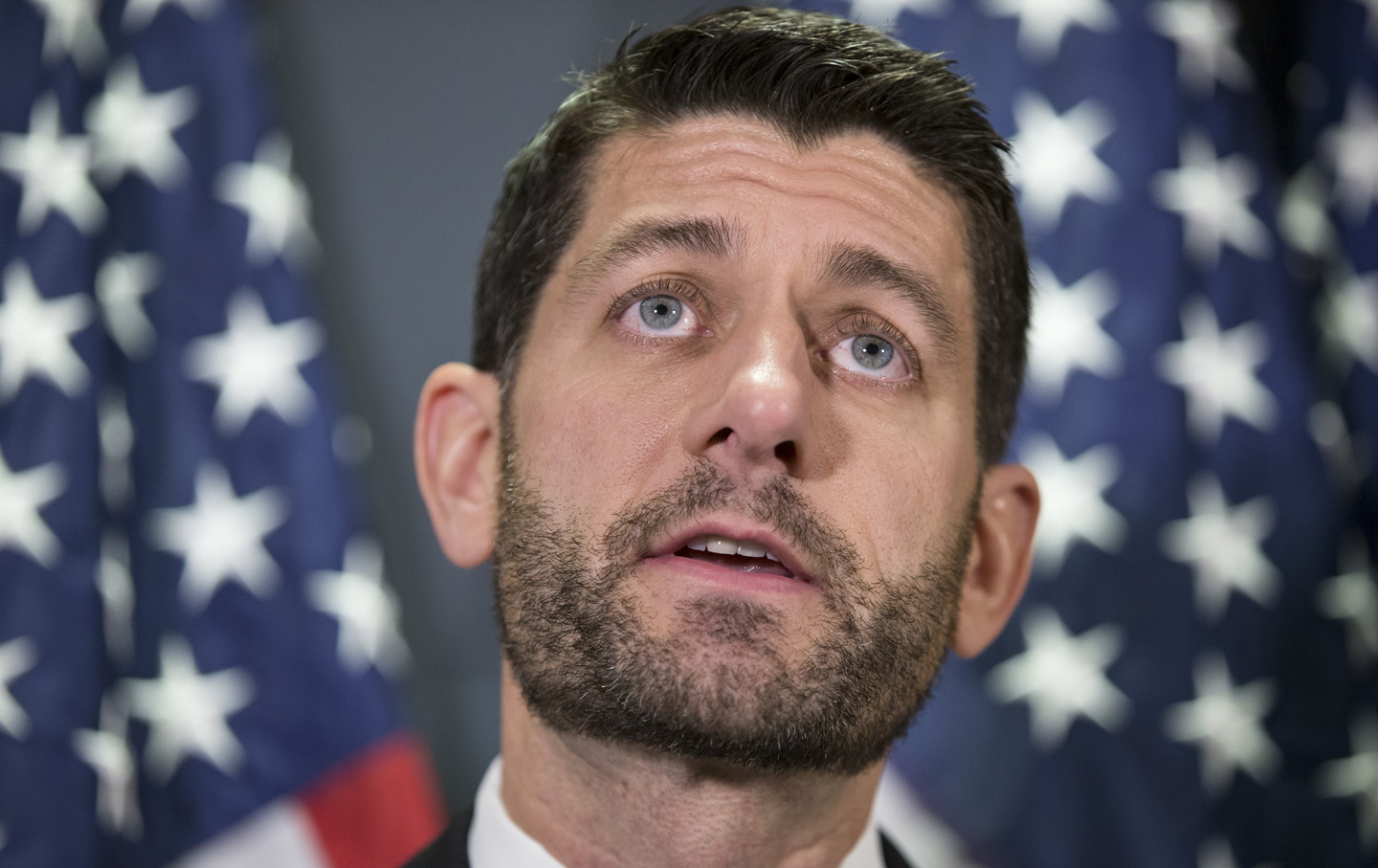 If the Republican establishment had set out to confirm every criticism Donald Trump has made of them, they could not have done a better job of it. Since Trump declared on Monday that he would bar Muslims from entering the United States, Republican presidential candidates and leaders have dutifully trooped to the microphones to say they disagree with Trump but would still accept him as their party’s nominee.

Yet, behind the scenes, they have been scrambling to avert his nomination.

Of course, in the fever swamps of contemporary politics, where loyalty is a catchphrase, not a reality, and where alliances are so strained that it is impossible even to know who is gaming who at any particular moment, there is no “behind the scenes.”

Secrets are not secrets for long. Hypocrisies become headlines.

So it was that, as the Republican establishment finally began to wrestle with the Trump reality, party leaders ended up wrestling with their own cowardice and cynicism.

Even as Republican National Committee chairman Reince Priebus, House Speaker Paul Ryan, and others were declaring their intention to back Trump if the front-runner for the party’s 2016 presidential nomination is, in fact, nominated, party elites were gathering to plot a strategy for stopping Trump.

Unfortunately for them, because they have relied on money and a media echo chamber for so long that they do not know how to engage in old-fashioned practical politics, the elites got everything wrong. And so, too, did much of the media.

On Thursday, The Washington Post reported that Priebus, Senate majority leader Mitch McConnell, and roughly 20 other Wall Street mandarins gathered for a “prix fixe three-course meal at the Source, an Asian fusion restaurant near the Capitol.” The supposedly secret talk was of trumping Trump.

The billionaire upstart’s candidacy has gone from strength to strength because of the failure of most of his fellow Republican contenders to even begin to seriously challenge his outrageous statements, and because lazy major media outlets have made Trump the central figure in vapid “celebrity-watch” coverage of the 2016 race. Now Trump has an overwhelming lead in national polls of Republicans, and solid leads in most primary and caucus states.

The Republican elites know that Trump has the potential to crash the party and its congressional candidates in the November 2016 race. And, just as troubling for Republican politicians and consultants who care about nothing so much as maintaining their sinecures, he has the potential to shift power away from the kind of folks who dine on prix-fixe three-course meal in chic Washington restaurants.

The prospect of a Trump victory has suddenly become a concern for Priebus, Ryan, McConnell, and their kind. And that may not be the worst of it.

The front-runner’s serious competition appears to be coming from Texas Senator Ted Cruz, the candidate most closely aligned with Trump (his response to Trump’s proposal to make religious discrimination a formal policy of the United States was a tepid “I do not agree with his proposals”). Unfortunately for the establishment, Cruz, who made his national name trying to shut down Congress, may be an ever harder November sell than Trump. Imagine a Republican ticket led by Cruz, with all his vulnerabilities, running with Trump’s oversight.

Or imagine a Republican ticket led by Cruz or some other political careerist, facing not just the Democrats but an independent challenge from a free-spending, media-surfing Trump.

It’s enough to upset even the best Asian fusion meal.

When will Republican leaders make it clear that they do not, and will not, back Trump as their nominee?

So the party establishment is searching for an out. And the thinking appears to be that they can somehow find it at a “brokered convention” next summer in Cleveland.

This just shows how completely out of touch Republican leaders have grown—with the mess of a party they have created, and with American politics.

Brokered conventions were once a thing, back in the days of Warren Harding. But that was when grassroots voters had little or no say in the nominating process. There were few primaries or caucuses—and even the ones that existed were “preference primaries” devoid of meaning. The brokers were party bosses, not the candidates or their supporters.

Big-city bosses arrived at conventions (yes, there were once Republican big-city bosses), along with “favorite sons” (usually governors or senators who had complete control of a state party’s apparatus). They got together in “smoke-filled rooms” and picked the candidate they thought to be most viable. Only when the elites disagreed would there be a floor fight, and it was invariably settled with more backroom deal making.

Karl Rove and Reince Priebus, undoubtedly, would love it if those days still existed. So, too, would Wall Street errand boys like Ryan and McConnell. But that’s not how things operate now. Delegates are chosen in primaries and caucuses. And Trump could win a lot of them. If he does, his supporters will be loyal to him, even if he does not arrive at the convention with a majority.

So what is really being discussed in DC by the party establishment is a strategy to unite all the delegates who are not Trump backers behind an alternative candidate. Under this theory, Trump might arrive with 49 percent of the delegates and get beat by some united-front alternative like Jeb Bush or Chris Christie or Paul Ryan or Mitt Romney.

Good luck with that.

Trump understands “the art of the deal,” and no one should rule off the prospect that he might cut a deal with Cruz or some other candidate who controls a block of delegates. Imagine a Trump-Cruz ticket, and you get the picture.

Trump, of course, will play this moment to his advantage.

What of responsible (and, yes, even irresponsible-but-rational) Republicans who want to prevent a Trump nomination?

Eventually, they must come to realize that the only way to beat Trump is to actually beat him at the polls. And the only way that will happen is if prominent Republicans absolutely reject Trump and Trumpism. It is not enough to say, as Ryan does, that the vile politics Trump proposes is “not conservative” or “not what this party stands for,” and then confirm an intention to back Trump if he is nominated.

If Trump is not what the Republican Party is about, then Republicans should be saying, publicly rather than in the backrooms of swank DC restaurants, that they do not want him as their party’s nominee.

And that, if Trump is nominated, they will not back him.

Yes, Trump will threaten to run as an independent.

But that threat has always existed, and it will always exist unless the party nominates Trump.

The question now is whether Republican leaders will make it clear that they do not, and will not, back Trump as their nominee. Until they do so publicly, without calculation or apology, their every move aids and abets Donald Trump.