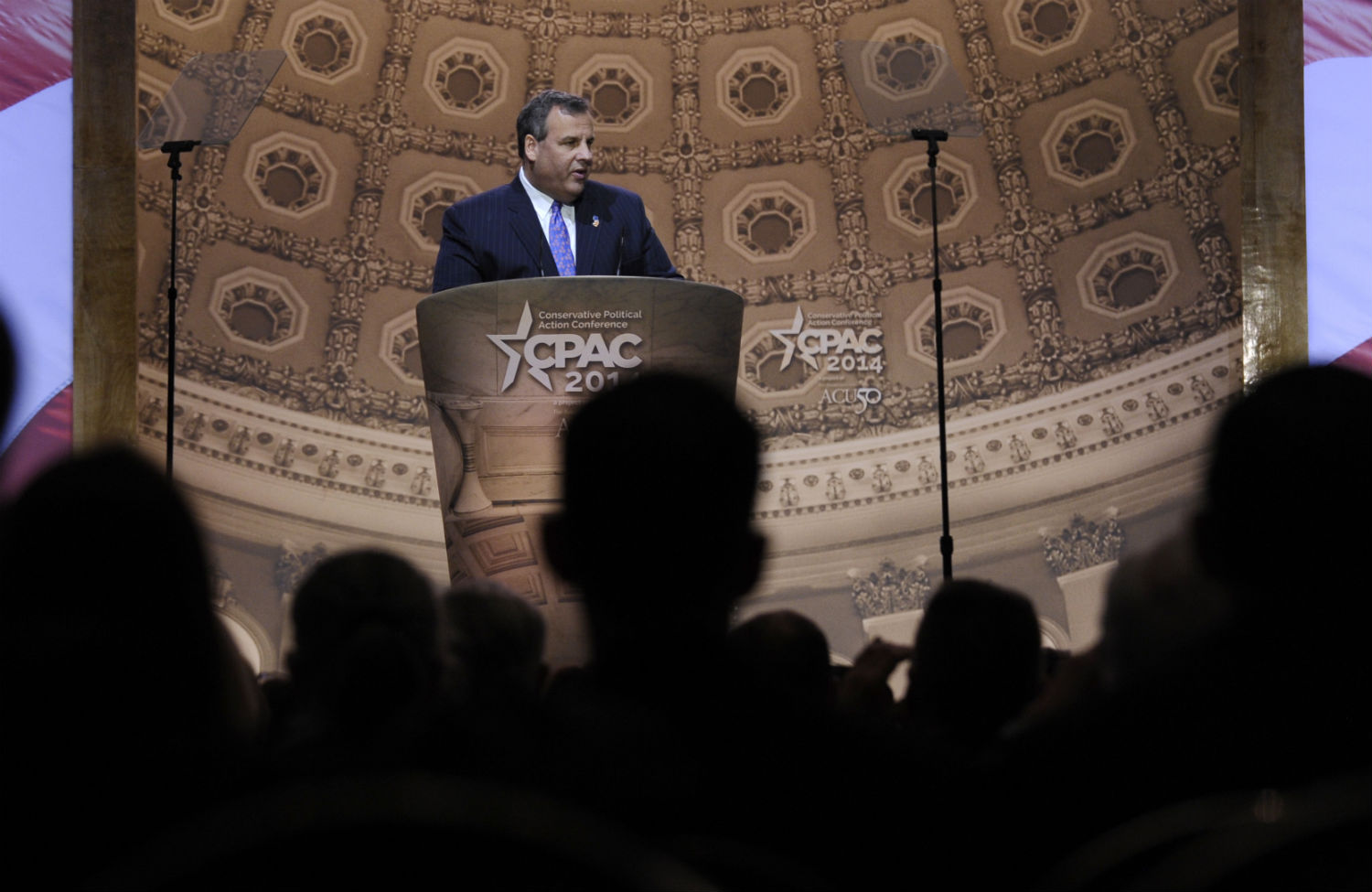 The hard-right audience at the Conservative Political Action Conference (CPAC) was expected to give Chris Christie, the governor of New Jersey and not exactly the Tea Party’s friend, a cool reception on Thursday. After all, in 2013 Christie wasn’t even invited to CPAC, and he’s earned a reputation as the establishment’s candidate, not the ally of the insurgent conservatives who fill CPAC’s ranks. Besides, outside in the hall his critics were evident, including John Bloom, a right-wing activist from Newport News, Virginia, holding a sign that read: “Walkout protest of Gov. Traffic Jam,” and who called Christie a “big-government Republican.” And, only that morning, The Washington Post ran a poll saying that 30 percent of Republican voters and 35 percent of conservatives wouldn’t consider voting for him.

But, confounding expectations, Christie entered the hall—to address a gathering of perhaps 1,500 to 2,000 people, by Christie Watch’s rough count—to rousing applause, whoops and hollers and a lengthy standing ovation.

Other presidential contenders who spoke today, including Texas Senator Ted Cruz, Louisiana Governor Bobby Jindal and Florida Senator Marco Rubio, were welcomed warmly, but it did appear that the beleaguered New Jersey governor was the star of the show. Perhaps it was because, as some attendees explained to Christie Watch, they thought Christie is being treated unfairly by Democrats and by the media. Or perhaps they identified with Christie’s bullying, tough-guy image, as others said. But whatever it was, Christie bathed in the applause, and he launched into a spirited account of his past efforts in New Jersey to confront unions, slash public pensions and take on teachers and other public employees.

But his core message, clearly aimed at skeptical conservatives who’d rather go with their hearts and back Cruz or Senator Rand Paul of Kentucky, who speaks on Friday, is that he can win a general election—and, by implication, they can’t:

We don’t get to govern if we don’t win. And they [the Democrats] do. Let’s come out of this conference resolved to win elections again.

By contrast, Senator Cruz, speaking earlier, urged CPAC attendees to support people who, like him, are fiercely loyal to hard-right policies and politics. In 1996, 2008 and 2012, said Cruz, the Republican party ran people who “don’t stand for anything,” and he joked: “All of us remember President Dole, President McCain and President Romney.”

In the hallways and in the exhibition hall, a Christie Watch reporter spoke to dozens of conference participants and, to the reporter’s surprise, quite a few were either enthusiastic or supportive of Christie. “We need a strong candidate who can go up against Hillary,” said Mary Reilly, a speech therapist from Virginia. “Christie might not be everything on every issue, but we need someone who can win. If he makes it through this current trouble, I think he’ll be the candidate.” Similarly, Dick Stabile, 73, a retired pharmacist from Pennsylvania who called himself “a Tea Party guy,” said:

I like Christie because he fights back. Romney was called a lot of names, and he never said squat. Christie would punch back. He’s a guy who doesn’t put up with stuff. He understands that the way the left goes after you is to destroy you personally, that he closed bridges. But he is one of the few who will counterattack. Romney had rich-man’s disease. His mother told him all the time, if someone hit him, “Let it go. We’re better than them.” Christie’s mother was a New Jersey Italian, and if Christie came back bloody from school, she’d say, “Good.”

Helen Davis, a retired air force officer from Virginia who’s planning to join a Tea Party group, said she likes what the country’s Republican governors are doing, especially Scott Walker of Wisconsin, who’s eviscerated the public-employee unions. (Walker, involved in a bitter re-election fight, isn’t appearing at CPAC.) On Christie, she said: “For me, what I heard is he made tough decisions in New Jersey, decisions that weren’t popular.” Asked why Christie got the reception that he did, she added: “They appreciate that he says what he thinks.”

To be sure—besides the activist who tried to organize a walkout against Christie, to little effect—the New Jersey governor had his strong critics and outright opponents in the crowd. Sylvia Strauss, from Bergen County, New Jersey, who said she’s with the Tea Party, said: “I despise Christie. He’s a phony. He’s part of the establishment. I don’t like the way he hangs around with Democrats, trying to show he’s with all the people.” Kristian Kramford, from Kernersville, North Carolina, said: “I’m not a Chris Christie fan. He’s not conservative enough for me.” And Carmen Villani, from Chantilly, Virginia, said, “I’m not sure he’s embracing conservative principles.” Villani is backing Cruz, at least for now. But he added: “Christie was obviously a popular speaker today, judging by the fact that the hall was full and by the applause he got.”

In any case, Christie did indeed get a stirring reception, and if a couple of dozen interviews means anything, there’s a reservoir of support for him among at least half or more of the attendees at a hard-core conservative conference.

However, with strong Wall Street support, the backing of the Republican party’s deep-pocketed contributors, and a national base as chairman of the Republican Governors Association, Christie is certainly one of the party’s establishment representatives. Cruz, on the other hand, appeals strongly to the party’s insurgent wing, and in his speech at CPAC Cruz struck a remarkably populist tone, with lines that wouldn’t be out of place at a Bill de Blasio rally. In between his rants about Obamacare, calls to repeal Dodd-Frank, and balance the federal budget, Cruz said that under Obama, “Wall Street prospers, and Main Street suffers.” And, he said, “We need to eliminate corporate welfare and crony capitalism.” For good measure, he added that members of Congress who leave office should be slapped with a “lifetime ban on lobbying.”

Not something Republicans are likely to hear from Chris Christie anytime soon.

Meanwhile, John Rhodes, 52, a financial consultant from Germantown, North Carolina, and a fan of Ted Cruz, complained to Christie Watch that Cruz would have a hard time winning because the left-leaning, mainstream media would bring him down. Paradoxically, though, he believes that the media is going after Christie because they perceive him as the most credible opponent of the Democratic candidate in 2016. “The media thinks he’s a threat, and they want to knock him out. They perceive him as the threat to Clinton.”