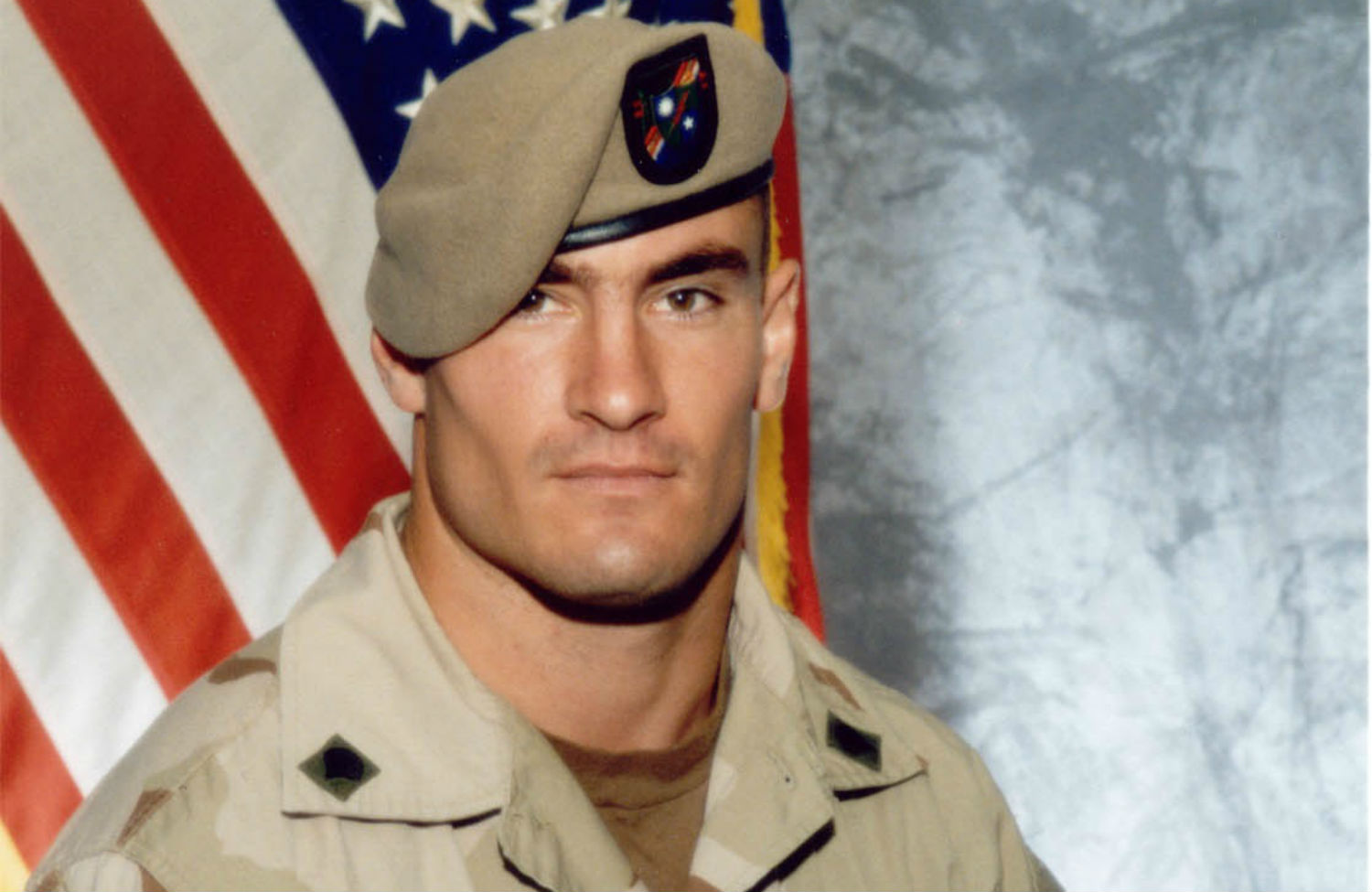 When former NFL-player-turned-Army-Ranger Pat Tillman was killed in Afghanistan by US troops, the Department of Defense deceived his family about how he died. It has still not offered full disclosure about what took place on that tragic day when Tillman was felled by “friendly fire.” Now Adidas, in conjunction with the Pat Tillman Foundation and Pat’s alma mater, Arizona State University, is producing camouflage shirts and sneakers in honor of the late Mr. Tillman. They are all part of Arizona State’s “Salute to Service” unis to be worn this Thursday night, yet their appearance and design raise serious concerns for those still inspired by the person Pat Tillman was, and troubled by the manner of his death.

The sneakers are called “Dark Ops” and are made partially of Kevlar, a material most closely associated with bulletproof vests. A glowing article about the sneakers made this unfortunate on-the-nose description: “All throughout the cleats, you’ll find helpings of Kevlar that help to make this year’s lineup of cleats some of the most battle-ready yet.” It then quotes the “senior sneaker designer” Thomas Hartings, who said, “Kevlar really brings it home for me, and ties to the soldiers and the real sacrifice that goes on in the military. Bringing that story into footwear is a pretty big deal.”

As ESPN writer Kevin Gemmell enthused, “Awesome doesn’t even begin to do them justice.”

Anyone with even a passing knowledge of Pat Tillman’s life and the manner of his death can think of some words other than “awesome.”

As for the shirts, they are jungle camouflage with a Pat Tillman quote on the back. The quote reads: “Passion is what makes life interesting, what ignites our soul, fuels our love and carries our friendships, stimulates our intellect, and pushes our limits.”

They did not choose the words that Pat Tillman said when he was sent on multiple Ranger missions in Iraq: “This war is so fucking illegal.”

I spoke with Rory Fanning, who served in the Army Rangers with Pat, and then walked across the country out of his own desire to raise money for the Tillman Foundation. “I couldn’t put words in Pat’s mouth, but I can say that the camo being worn in Pat’s name should be designed with burn marks,” he said. “Then it wouldn’t be shameless propaganda but instead would call attention to the fact that Pat’s uniform and diary were burned by the chain of command before his autopsy as they tried to cover up the true cause of his death. Maybe burned and tattered cleats could remind people that no high-ranking officers or members of the Bush administration were ever held accountable for the cover-up.”

That is the continual and eternal inconvenient truth surrounding efforts to conjoin Pat’s memory with military “salutes.” Pat steadfastly refused again and again to be used as a propaganda tool for the “War on Terror.” He did not want to see his fame used to spur others to join the service. He just wanted to be another soldier. Then, when Pat was killed by his own troops, the media, in the words of his mother Mary, “ran with the perception they had of him, some kind of caricature of who they thought he was.” I spoke to Mary in a 2008 interview, and she said that this caricature “was so off that it was like he died twice…. It was very offensive because people just jumped to conclusions, they never talked to him once, they never read anything about him…. He definitely was not in favor of the war in Iraq. That is true and that caused concern for us after he was killed. And when the information looks so suspicious and so contradictory–we were concerned that he could have been killed on purpose.”

That last chilling line by Mary Tillman is the other part of this uni rollout that seems like someone’s idea of a very twisted and altogether unfunny joke. Adidas is calling the shoe “Dark Ops.” The definition of a “Dark Ops” in military parlance is a mission that involves “a significant degree of deception, to conceal who is behind it or to make it appear that some other entity is responsible.” The actual head of “Dark Ops” when Tillman was killed was Lt. Gen. Stanley McChrystal (now retired). So much of the obfuscation that took place after Pat’s death—the burning of Pat’s uniform and field journal, the separation and interrogation of all troops who were on the scene—has McChrystal’s fingerprints on it. It was also McChrystal who approved Tillman’s posthumous Silver Star, a medal given explicitly for combat, not friendly-fire deaths, even though McChrystal later testified that he knew how Pat died. As Pat’s father said about McChrystal, “I do believe that guy participated in a falsified homicide investigation.” Mary Tillman as well absolutely excoriates McChrystal in her book, Boots on the Ground by Dusk: My Tribute to Pat Tillman,

Again, this was the head of Dark Ops, and this is what they decided to name this sneaker.

But the main thing that’s upsetting is—as I can say with confidence having talked to numerous friends and family of Pat Tillman over the years—that he never wanted to be used to promote the military. Yes, I am aware that the press releases say that “the Tillman family” was involved in the design of the shirts and shoes, and I hope the Tillman foundation, run by Pat’s widow Marie, is able to get the funds to continue its remarkable scholarship work. I reached out to the foundation for comment and while we communicated, they did not want to add anything to this story, they wanted it known that the Tillman foundation’s mission “under Marie’s leadership has been to invest in military veterans and spouses through academic scholarships. To date, PTF has invested over $12 million in academic support and named over 400 Tillman Scholars at 108 universities nationwide.” It is incredibly important work. It is also clear that raising that kind of financial aid comes with a price.