London—Into Trafalgar Square on Wednesday, two days into the latest round of climate protests by Extinction Rebellion, comes Stanley Johnson—a supporter of the movement and also Prime Minister Boris Johnson’s dad. Stanley Johnson joins a panel of three other politicians: one Labour, one Green, and one Liberal Democrat. On a dais near the center of the square, surrounded by tents and rebels (as members of Extinction Rebellion call themselves), the four politely debate the question “Can traditional politics cope with or respond to the current ecological emergency?” While Johnson senior speaks, someone in the crowd waves a blue and yellow EU flag, with Extinction Rebellion’s hourglass logo glued to the middle.

The moment captures the absurdity of British politics: Stanley Johnson, a former member of the European Parliament, speaking genially to protesters with the EU flag in the background while his son dismisses Extinction Rebellion as “uncooperative crusties” (British for vagrants) and tries to lurch the United Kingdom out of Europe.

It also points to a tension in Extinction Rebellion, or XR. The movement is known for its mantra “Beyond politics.” It has no stance on Brexit—the outcome of which will likely be decided this week—and it refuses to endorse a candidate for the general election that is likely to follow. The UK is in a full-blown constitutional crisis. Against that backdrop, what could “beyond politics” possibly mean? 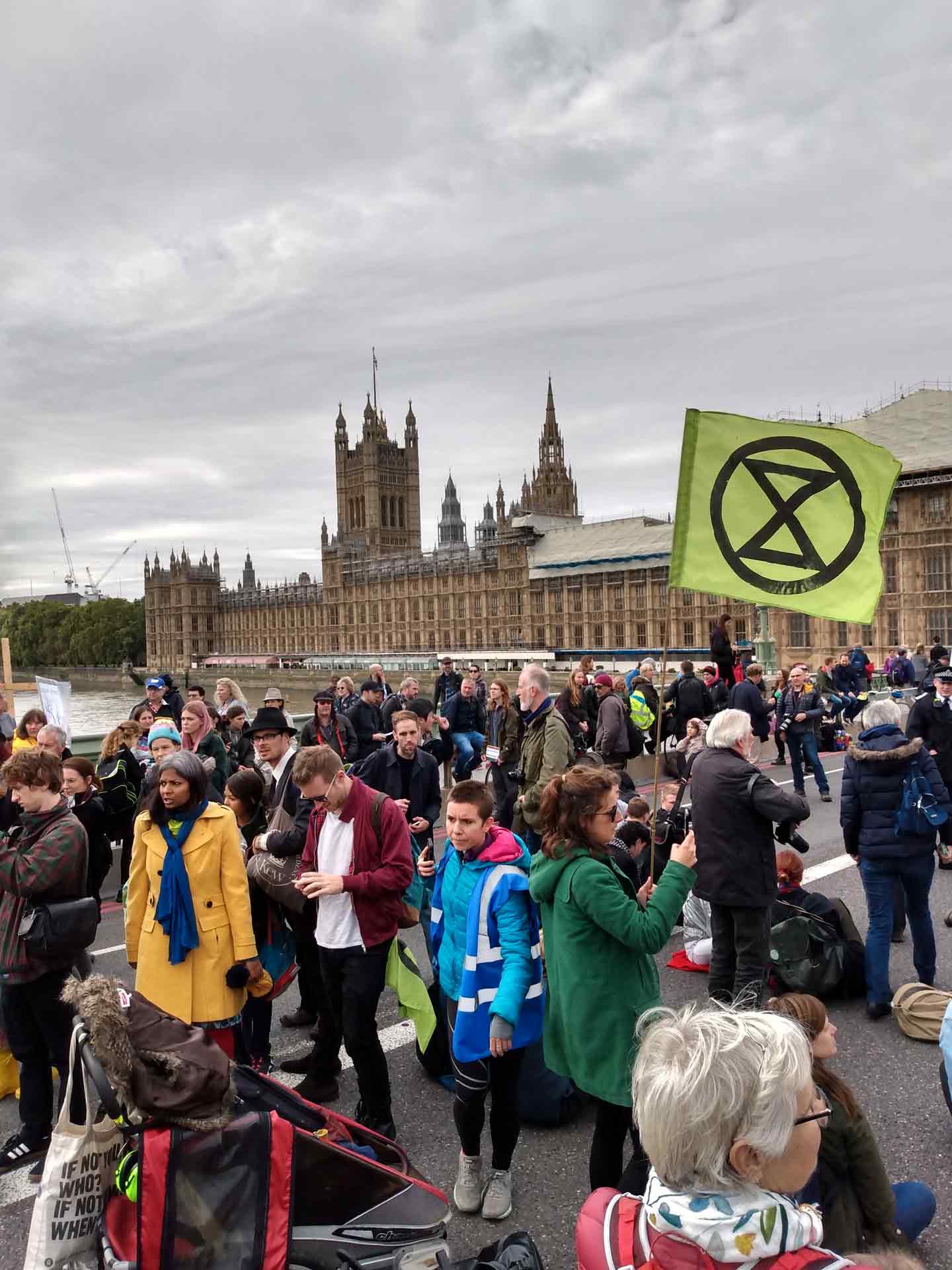 Extinction Rebellion began just under a year ago, when rebels occupied five bridges in London. Since then, the movement has taken off. In April it blocked four major intersections for over a week, which led to mass arrests, traffic jams, and lots of press. With press came money: XR is now one of the best-funded protest movements in the world. It has affiliate chapters in more than 60 countries. (Because its organizing structure is horizontal, each local XR group is autonomous.) October 7 marked the start of a “global rebellion”: two weeks of nonviolent civil disobedience in cities all over the world, from Melbourne (where rebels organized a “nudie run” and glued themselves to buildings) to New York (where they doused the Wall Street bull in fake blood).

But the epicenter remains London, where tens of thousands of rebels from across the UK have converged on six sites around Westminster. An XR pamphlet in the Tube warned, “Londoners: take two weeks off work.” Despite heavy police response—1,300 arrests as of Sunday and an order demanding that rebels restrict their protests to Trafalgar in anticipation of the queen’s speech on Monday—XR has temporarily transformed the Westminster area into an intensely policed charivari. The choice of location is no accident. XR intends to literally stop politics as usual.

At the base of Nelson’s Column, three huge banners spell out Extinction Rebellion’s demands: “Tell the truth,” “Act now,” and “Beyond politics.” The first asks the UK government to declare a climate emergency. The second calls for legislation that would bind the UK to reaching net-zero carbon emissions by 2025. Both of these are easily understood and have prompted action. In May, Parliament (but not the government‚ declared a climate emergency. In June the UK became the first nation to pass binding legislation to reach net-zero emissions—but only by 2050 and without a plan for how to get there.

That leaves “Beyond politics.” The demand is harder to understand. XR uses it to call for the formation of a citizens’ assembly. The idea is that small groups of randomly selected citizens would come together, learn about the climate crisis from experts, and agree on binding policy recommendations that the legislature would have to adopt. Citizens’ assemblies are not new, and they are not exclusively linked to climate politics. In 2017, for example, Ireland successfully used them to help broach the question of legalizing abortion. 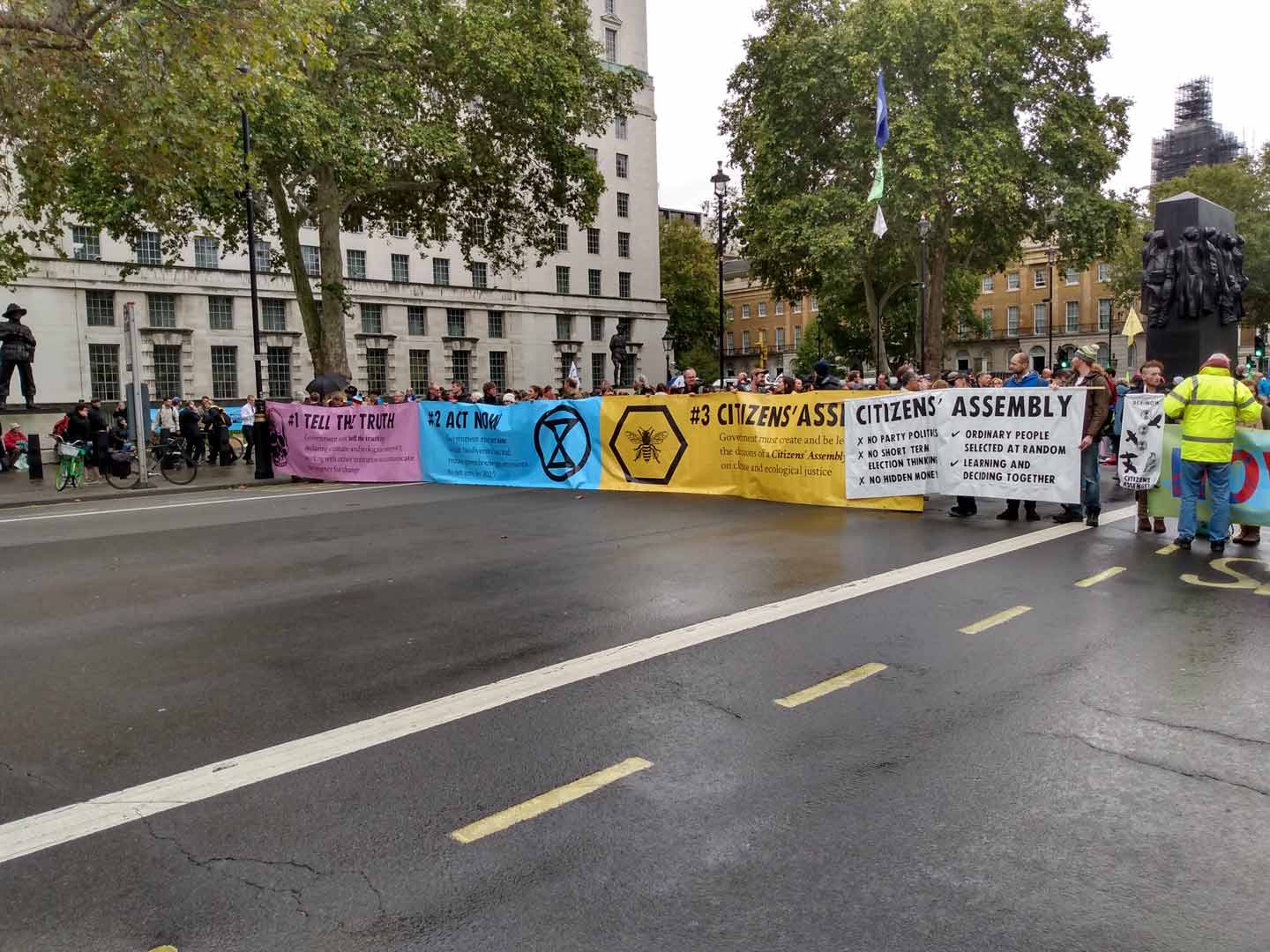 On Monday, the man holding the citizens’ assembly banner on Whitehall street is Dominic, a middle-aged, clean-cut rebel from Rye. (His rebellion would be short-lived: Two days later, I stumble across a photo of Dominic, glasses askew and legs splayed out, getting arrested for refusing to yield the road.) He pitches the assembly to me as a way to “take away the burden from politicians.” Let citizens make the tough calls on climate politics, he says, so that politicians won’t have to. “It would be amazing to actually be listened to,” a young woman sitting in the street tells me later. “And right now politicians are doing fuck all.” The call for citizens’ assemblies is, in part, an indication of the shattered state of the British political system.

(There is a hint of irony to this. Citizens’ assemblies are a much better model of direct democracy than a crude referendum, but the idea nonetheless carries some uncomfortable echoes. Wasn’t Brexit originally about actually listening to the people, too?)

There is also a second meaning of “beyond politics”: an appeal to avoid political parties and ideologies altogether. “This is the first truly shared global crisis,” says Ronan Harrington, the coordinator of XR’s UK General Election Strategy Group. “It can’t have a left-wing solution.” The line rings funny to my American ears, and it is out of tune with much of the global climate movement, which often tries to refract climate action through a left-right lens. But a nonideological approach is central to Extinction Rebellion’s ethos.

XR insists that climate politics begins on an emotional level, with a sense of grief and loss that we can all share, regardless of political beliefs. On Friday the London sites come together for a Grief March, some 30,000 strong, through the commercial hell of Oxford Street. The black funeral attire and the gloomy British sky create an atmosphere of grim prophetic pride. Only after we really feel what the climate crisis means and truly absorb the possibility of imminent societal collapse will we put aside our partisan rancor and, yes, let love drive our actions. XR practices what it preaches. Rebels chant “We love you!” to arrested protesters as the police carry them off. And then they chant the same to the police themselves.

It’s tempting to dismiss this as hippie mush. But I don’t think that’s right. XR may strike a naive-sounding tune, but it has not chosen it naively. Rather, Extinction Rebellion is trying to redefine “the political.” “There is no real enemy,” Harrington says to me at Trafalgar. “Obviously there are roles and institutions that we have to stop, but ultimately all of us…even those in positions of great power, we are all cocreating a system that is serving no one. [Ours] is a very spiritual view, that no person is beyond redemption”—as long as the person acts. This is a vision of politics, too, just without the Schmidtian friend/enemy framework that leftist writer-activists have championed for the past few decades. And yeah, I found myself thinking, “Why not?” The standard left-versus-right approach to climate politics hasn’t exactly worked. XR’s refusal to play by those rules is disarming.

There are pitfalls, to be sure, and XR is aware of them. The movement’s UK strategy document notes that since April, there has been “conflict in the national team” about whether “being apolitical and radically inclusive in the wake of growing far-right movements and emerging eco-fascist ideologies” is a wise move. (That said, the signs at Trafalgar Square are distinctly leftist—“Global justice now!” and “No to environmental racism!”)

Then there’s Brexit. “We didn’t know if this was the best timing or the worst timing,” says Harrington. In the lead-up to the protests, XR strategists urged rebels to resist the temptation to link climate protest to the Brexit debacle, warning of “the risk of being pulled into a polarized debate and alienating us from large chunks of the population.” But remaining silent on Brexit risks marginalization through irrelevance. Harrington acknowledges that there is “a certain sense of impotence on not being able to fully comment on the biggest issue of the moment.”

And yet that impotence might be precisely XR’s strength. This is a movement from and for the UK. It can be tailored to other countries, but its DNA is bound to this peculiar British political moment. And in that context, with the meaning of “politics” so poisoned by Brexit, XR’s slogan performs a neat twist: “Beyond politics” doubles as code for “beyond Brexit.”

Remaining politically neutral has another benefit, explains Harrington: It opens “the possibility of all parties’ outcompeting each other to meet us where we are.” He grins mischievously. “It’s the natural byproduct of playing hard to get.” The bet is that by holding their ground, XR can bring politicians from across the spectrum into their camp—literally.

This week, that bet appeared to work. When Stanley Johnson stood with Rupert Read (Greens), Skeena Rathor (Labour), and Siobhan Benita (Liberal Democrat) to speak at Trafalgar, the event quickly became a comedy of self-serving pitches by each speaker for his or her party. “I want to give you one specific reason to love the Green Party,” Read said. Benita, who is running in London’s mayoral election, lapsed into a stump speech. Rathor touted Labour’s links to Extinction Rebellion. And Johnson defended his son—“The prime minister really does get it”—claimed Margaret Thatcher as a founder of Britain’s environmental movement, and encouraged rebels to keep aiming for net-zero carbon emissions by 2025. “Fine, fine. Go for it! It is doable.” The speakers seem sincere. But they are also all vying for votes.

It is staggering to watch representatives from Britain’s four major parties curry favor with a movement with a set of demands so stringent—and a penchant for disruption so notorious—as Extinction Rebellion. For here and for now, the rebels’ strategy might be right. By going beyond politics, they are making politics come to them.