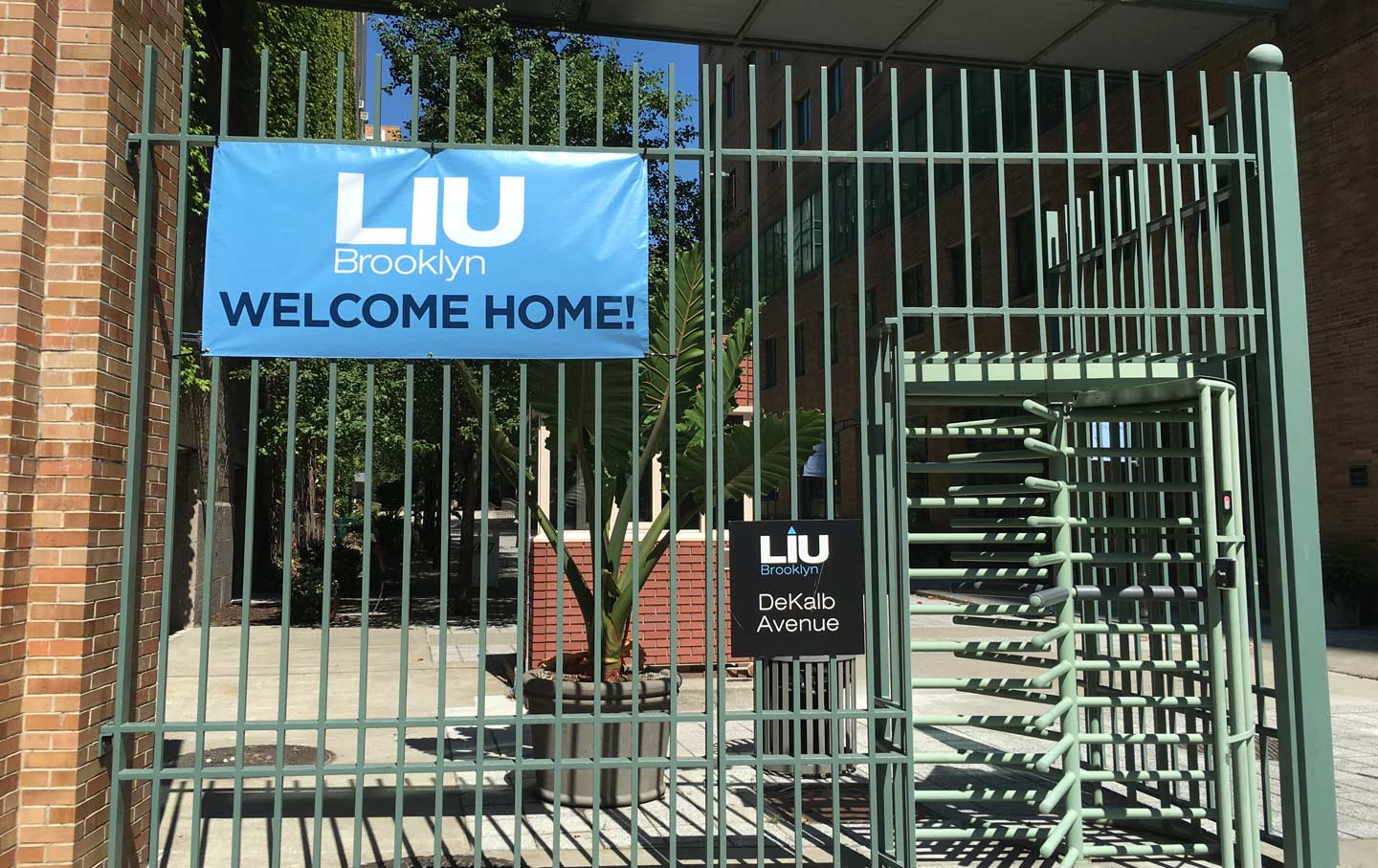 The Brooklyn campus of Long Island University. (The Nation)

We have names for people who fill the jobs of striking union workers: strikebreakers, replacement workers, scabs. But what to call the people who take the jobs of union members who aren’t striking? Certainly not “professor.” Starting September 7, the first day of the fall semester at Long Island University’s Brooklyn campus, classes will be taught entirely by non-faculty members—not because the faculty are on strike, but because on the Friday before Labor Day the administration officially locked out all 400 members of the Long Island University Faculty Federation (LIUFF), which represents full-time and adjunct faculty.

This is the first time that higher-ed faculty have ever been locked out.

In April, the union and the administration began negotiating a new contract to replace the one set to expire on August 31. Sticking points included cuts to wages for new full-time faculty and adjuncts, the longstanding imbalance in salaries at the Brooklyn campus compared to those at the Post campus on Long Island, and changes to post-tenure review, adjunct teaching hours, and faculty say in class size and online curriculum. Negotiations were still happening in early July when faculty learned the administration had posted notices of job openings for teachers. On August 31, the administration presented its last best offer, which in a letter to faculty it claimed “contains generous increases in salary minima and base wage increases and addresses other areas of concern.” This letter also included the less-than-generous news that faculty were getting locked out, citing the “historical likelihood of a strike.” According to Kevin Pollitt, a labor relations specialist with New York State United Teachers, this is the first time that higher-ed faculty have ever been locked out.

“We’ve been bargaining in good faith and we continue to bargain,” said LIUFF president Jessica Rosenberg. “We had planned to bring their last best final offer to the membership for a ratifying vote on the 31st and they preempted that by informing us we were going to be locked out, and immediately after they locked us out they cut healthcare, salary, and access to e-mail and students.”

“They’re putting economic pressure on the faculty,” said Pollitt. Some faculty say economic pressure as a tool, and a fixation on economics generally has defined LIU president Kimberly Cline’s administration. It began the summer of 2013, before she officially assumed the role of president in September, when according to Rosenberg, hundreds of low- and mid-level administrative support staff, many of them long-term employees, either left or were laid off. During Cline’s first meeting with the faculty senate, she denied any role in this. “The basic thrust of her administration has been to accrue a surplus budget, and she has done that only by firing people,” says Deborah Mutnick, a professor of English and a member of the union executive committee.

When Cline arrived, the school was in bad shape financially, its credit rating approaching junk status. Mutnick points out that when Leon Botstein, then president of Bard College, found himself in the same position, he essentially said “so what?” Botstein was far more concerned with the school’s ability to be a force for public good than its credit rating. “Cline and the LIU board of trustees have had the opposite view: that the primary goal of the university is to improve its credit rating,” said Mutnick. “We feel like we’re the poster child for austerity and neoliberalism in higher education. She wants to corporatize and monetize the university—she wants to turn us into a candy store, and she’s alienated everybody.”

This “everybody” includes four other unions—secretaries and clerks; carpenters; engineers and maintenance workers, and janitorial staff—who have all been working without a contract since 2012, before Cline arrived. “Since then, two of those unions have been outsourced—they’re not even our employees anymore,” says Rosenberg. There has also been heavy turnover in deans at both campuses. In July of this year New York City public advocate Letitia James sent Cline a letter advising her to sign contracts with all four unions and warning her that hiring replacement workers for the fifth—faculty—“will only exacerbate your troubled relationship with labor in New York City.”

Rumor has it that Dean David Cohen will be taking over ballet classes taught by a former Alvin Ailey dancer.

In addition to hiring replacement workers, Cline has also lassoed administrators—some of them almost satirically unqualified—into teaching. Provost Gale Haynes, LIU’s chief legal counsel, will be teaching Hatha yoga. “It’s kind of hilarious,” says Rosenberg. “I’m not being disrespectful, but she’s an older woman—she’s not a yoga teacher, let’s just put it like that.” Rumor has it that Dean David Cohen, a man in his 70s, will be taking over ballet classes scheduled to be taught by Dana Hash-Campbell, a longtime teacher who was previously a principal dancer and company teacher with the Alvin Ailey American Dance Theater. “It’s absurd,” says Rosenberg. This is my speculation, but I think they’re doing this as an act of protest. I don’t see any other explanation.”

The humor seems to be lost on the students. Thirty-one-year-old Bryan Sorak, a student in the master’s of education program, learned via an administrative e-mail that someone he didn’t know would be taking the place of the professor he had chosen to oversee his thesis project during his final semester. “That’s troubling to me because it means they’ve been planning this. I used to work for the New York City Department of Education, and they had worked for three years without a contract. When I saw they were going to lock out the teachers the minute after the contract expired, I was bothered by that.”

On September 6, the day before classes begin, the exiled faculty will gather in a nearby church to vote the new contract up or down. Rosenberg anticipates that the faculty senate will also soon vote on a no-confidence measure—an action that Mutnick says has been brewing since Cline arrived.

“I think this administration thinks it doesn’t matter who’s teaching in the classroom,” says Emily Drabinski, the coordinator of library instruction and secretary of LIUFF (full disclosure: Emily is a friend of mine). “I think they think that teaching and learning is about a production of commodities, that it’s about delivering something to students, filling a student with learning that they will then go out and use to make money, and that’s not what higher education is about.”

To many students, quality teaching isn’t an abstract principle: It’s what they’re buying, often with loans that will follow them for years. “You expect to get what you’re paying for,” says Hakim Sulaimani, a 22-year-old Brooklyn native majoring in psychology. “You’re paying upwards of 40 grand for a certain level of education and you’re expecting a quality education. I selected certain professors because they’re very passionate and knowledgeable about their subjects. I expect to be taught by the guy I signed up for and not some guy who just popped up two weeks ago.”

Halim Nurdin, a 24-year-old history major and Marine Corps veteran from Harrisburg, Pennsylvania, is skeptical of the administration’s claims that the faculty are demanding more than their share. “I didn’t want to be biased against the administration, but since the new president took over she cut the yellow-ribbon scholarship for veterans, and I have friends who are athletes and coaches and they told me that money is being pulled out of athletics. I think I’ve sent her about 15 e-mails and I’ve gotten no response. I told her how it’s unfair to the students who are paying a high-end price when some of the replacements who are coming in aren’t even qualified to teach their subjects.”

Catherine Garibaldi, a 26 year-old student from Suffolk County, already carrying debt from her undergraduate days on the Post campus, is paying over $42,000 for the two-year master’s microbiology program. “It’s extremely disruptive, especially on the graduate level where there’s so much material to cover in a 13-week semester. One of the classes I signed up for is a really tough class, but I know the professor, and I know that she’s going to teach it well.”

Bolstered by a contingent of students, the faculty will stage a sidewalk protest on September 7. They cannot be permanently replaced during the lockout, but many feel they are under siege. “I do feel personally like we’re fighting for something much bigger than this contract,” says Mutnick. “What’s happening in higher education, what kind of country are we going to become? There is no public anymore, there is no educational context for this, it’s all about money.”