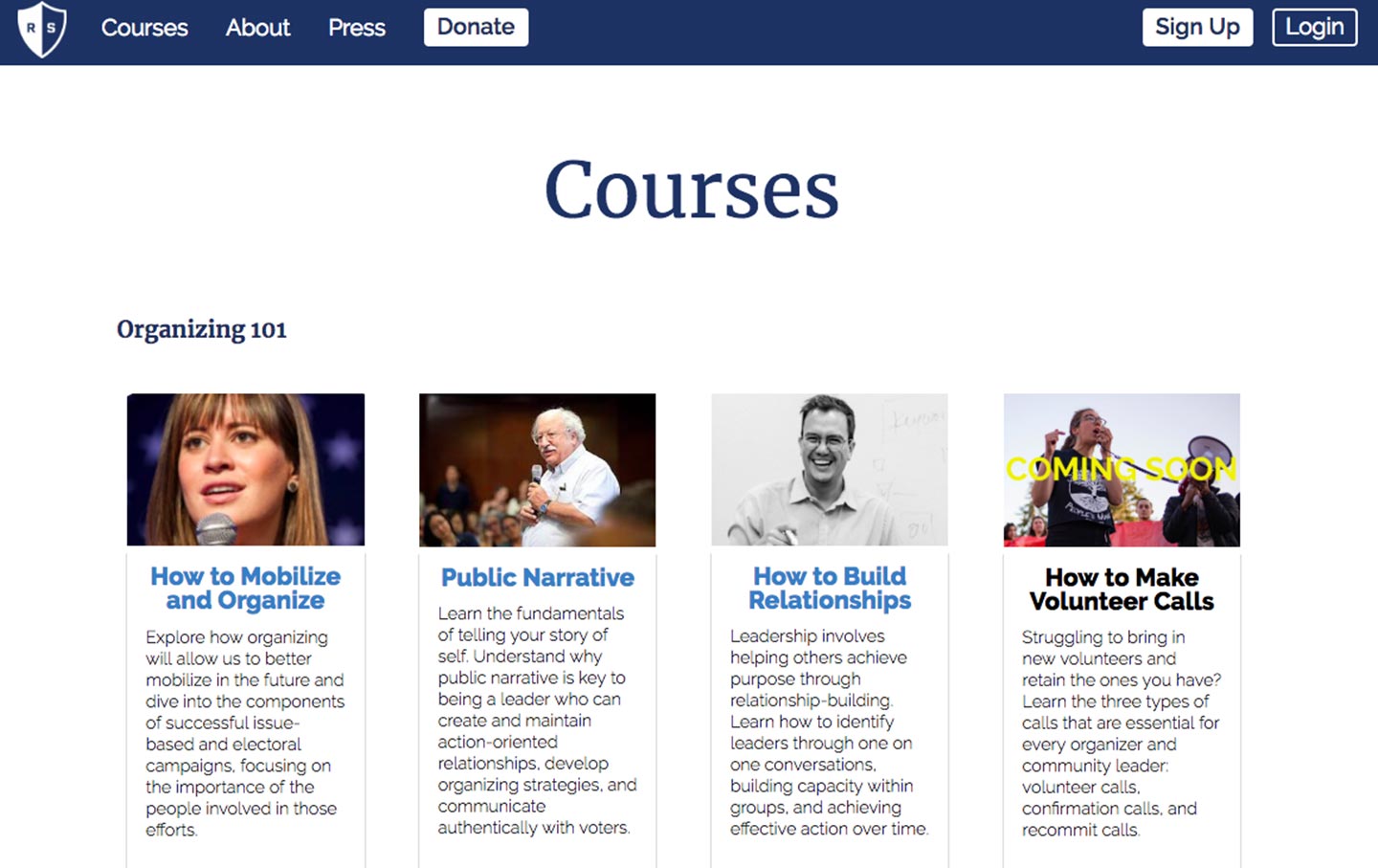 A few of more than a dozen course offerings. (Image provided by the Resistance School)

In the face of unprecedented attacks on our democracy, we haven’t seen apathy or despair. Instead, we’ve seen resistance. According to an April Washington Post survey, a full 20 percent of Americans have attended a political rally since the 2016 election. Out of these tens of millions of people, nearly a fifth were civically engaged for the first time. Across the country, millions are showing up at town-hall meetings, calling their members of Congress, and marching for justice.

In March 2017, a group of Harvard Kennedy School students wanted to know: What happens when you hang up the phone with your elected official, when you drive home from a town hall, when you pack up your signs after a march? What’s the next step? How do each of us—the single mother of two, the immigrant worker juggling three jobs, the student stressed about finding a job or paying back their debt—move from concerned person to engaged citizen?

We founded Resistance School to help build that bridge. The animating idea behind the project is that, whether you are new to organizing or an experienced activist, you should have access to free, high-quality online training that will equip you with skills and tools you need to make the changes you want to see in the world. In our first year, along with our partner campus Resistance School @ Berkeley, we created more than 20 training videos, reaching nearly 400,000 people.

We created these tools because we believe that the skills and knowledge required to build and sustain movements should be owned by the people, not just political operatives, campaigns, well-funded advocacy groups, and academics. In early July, Resistance School launched an online learning hub for civic engagement. This Khan Academy–style platform allows people to watch short videos, dive into relevant readings and resources, discuss their takeaways with peers, check their understanding through short quizzes, and then directly connect with groups to take action.

What we’re talking about isn’t new. In the past, citizens were trained to be on the front lines—engaging and organizing, speaking truth to power, and strengthening our democracy; it was bottom-up, not top-down. During the Progressive Era, everyday people mobilized to revolt against corporate monopolies. In the 1930s, the labor movement fought for Social Security, unemployment benefits, and the right to collective bargaining for workers. During the civil-rights movement, millions of citizens organized, using bold strategies and diverse tactics to challenge and dismantle Jim Crow segregation. On the shoulders of the civil-rights movement, millions stood up and spoke out to address the plight of farmworkers and women, immigrants and the disabled, LGBT people, and the planet itself.

But in the last few decades there’s been a decided emphasis on short-term electoral victories, as big donors have invested in experts, specialists, and a professional class of organizers. The experts acquired specialized skills and tools and then determined when and with whom to share their knowledge. Often, this was based around membership, money, and our two- and four-year electoral cycles. But when campaigns ended, many experts moved on to other fights and the collective knowledge on the ground fragmented and disappeared. I was a part of this as a field organizer on the 2012 Obama campaign and later on the 2016 Sanders campaign. The day after the election, teams of everyday people were no longer able to access the training and support needed to continue organizing in their communities.

For the last couple of decades, while some people remained on the front lines fighting, many of us became resigned to this professionalization. We waited to get involved only for campaign season, abandoning our larger civic responsibility to be engaged all year long. But we’ve reached a moment where millions are saying no more. Black Lives Matter, the Dreamers, the Women’s March, March for Our Lives, Indivisible, the Poor People’s Campaign, and many other groups have recently shown the power of persistent, non-electoral political engagement. All this activist energy—this new citizenship—demonstrates that people are no longer waiting for electoral campaigns to come around. They are organizing right now because our lives and destinies depend on it.

Resistance School aims to support this new citizenship by following in the steps of a long tradition of ordinary Americans who took it upon themselves to organize their communities and defend core values like social justice, racial equity, and economic fairness. With the 2016 election behind us and with so much injustice and inequality to address in the years ahead, everyone who wants to be involved should be able to access the skills and tools they need—not only to resist, but to reclaim, rebuild, and reimagine America.