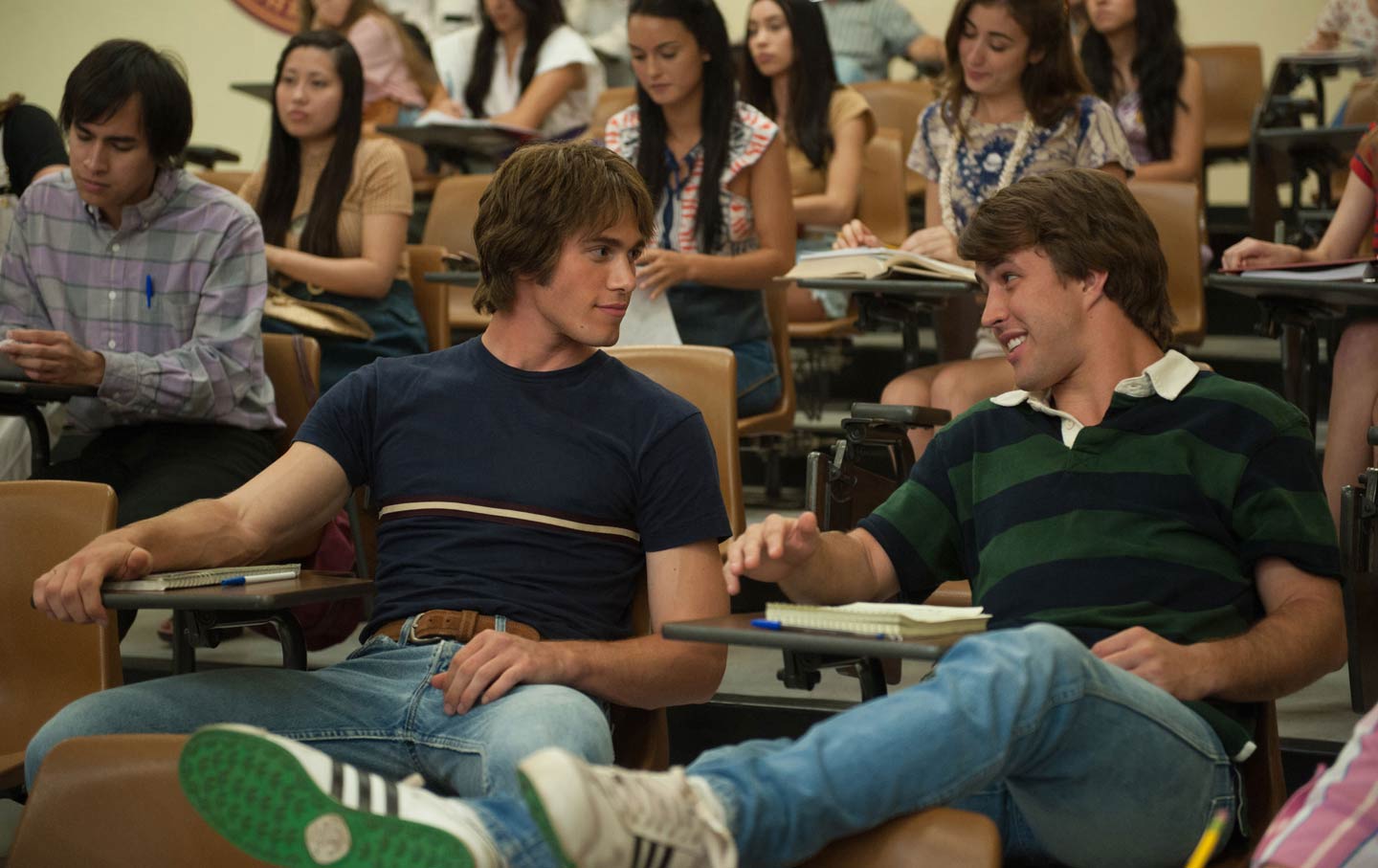 Blake Jenner and Temple Baker in Everybody Wants Some!! (Paramount)

Aziz Ansari, in a tribute to comedy writer Harris Wittels, calls him “the chuffah king,” explaining, “chuffah is the random nonsense characters in a scene talk about before getting to the meat of it that leads to story.” Originally it referred to screenplay passages that do not advance the plot. In a possibly apocryphal story, Bruce Willis berates Kevin Smith for adding too much dialogue not directly involved in the hero’s race to defuse the bomb. Over time, the term came to signify as well the murmur at the edges of scenes. Inevitably, however, the writing of chuffah became an art among its practitioners—a sort of secret communication, made to shimmer precisely through its own insignificance. Who could write the wittiest, the most ludicrous, most suggestive chatter?

It is a classic sort of paradox: talk that is defined and given meaning by its purpose of being not heard, not meaningful conversation, not-talk as it were. This is the drama of chuffah.

Or it would be, but for the way it has started to move toward the center of things. One might even say there is now a whole cinema in which idle and aimless remarks are the main action. This is quite different from the cinema of ideas, typically an art film featuring European persons discussing ideas that you and I could also discuss, were we the sort to summarize chapters of philosophy books as if the ideas had just come to us.

In this new mode, Quentin Tarantino is a crucial figure. If we remember Reservoir Dogs for the stylized violence, it was not terribly unusual in that regard. Rather, it was the gangsters’ sitting down to parse Madonna lyrics. It resembles chuffah in every way but one: the exchange, and others like it, goes on for too long. Not that it gets boring. But it’s trivial (the pop music theme assures us of this) and does not advance the plot, nor even develop the characters. We have developed a sense of how long such conversation can last in a dramatic film. Call it the chuffah quotient. Said discussion exceeds this with deadpan glee. The effect as it accrues is perhaps like reading a comic book with the superhero excised, just the remainder hanging around doing its best to fill the frame. Chuffah is now just… the movie.

This is even more pronounced in Tarantino’s later films, especially his middle period. These are so conversational and even thoughtful that they might risk lurching toward the cinema of ideas, except that these movies are not called My Dinner with Andre. They are called Kill Bill. And yet there is precious little Bill-killing. We are promised some version of the ticking bomb (note that Bruce Willis is a Tarantino regular; oh the irony) and receive in its stead a whole lotta signature yakkety-yak. This is cinema chuffah at degree zero.

Richard Linklater is another current maestro of the genre. The director has tarried with the cinema of ideas, most notably in Waking Life: a bunch of animated figures vomiting forth little hairballs of philosophy. The Before trilogy hovers near the same mode, a slack version of the Euromance featuring the talky mating dance of the lumpenintelligentsia. Linklater’s best film, however, is basically cinema chuffah. Taking his initial feature Slacker’s errant daisy-chain of chit-chat for a baseline, Dazed and Confused makes itself out of deeply charming secondary conversations without a primary; the plot is so primitive it’s a miracle they have fire.

His new venture Everybody Wants Some!! is a sort of sequel, swapping the last day of high school for first day of college. Unlike its predecessor, its quotidian dialogue (and there is truly nothing else to the movie) is spoken almost entirely by men; the film has been thoughtfully reviewed elsewhere in ways that bring forward its idyllic repression of sexual threat and violence. It’s perhaps a bit dull, with some good bits. But that’s chuffah for you. One does not ask why it is low stakes and thus often low-powered. A better question is why this cinema has arisen in our time, and why it is so successful at conjuring a certain haze of Americana. Its particular backward glance to when men were men and the movies were the movies is actually quite an extraordinary contradiction, given that the genre itself did not exist in the past toward which it regularly peers. It is as if the national story is that there used to be a national story, a narrative, a plot, a ticking bomb, bodies racing to do something very important. Those were the times streaked in gold. Now we just talk. And we sort of love it.

But isn’t that just… true? Does this not correspond to the great transformation, the rise of the service economy, of care labor—to the spreading knowledge that this is now what work looks like? Making conversation, keeping people on the line, managing their affect. Chuffah is in no way new. It is what every restaurant server knows by heart, every sex worker, every customer-service specialist. These just turn out to be paradigms for vast tracts of the horrifically polarized labor market these last couple of decades. It only makes sense that this mode of being, the new Americana, would get its own cinema. What makes less sense is that even this role, the role of the service economy would still be played by white men. Surely it cannot be that hard to cast the present, even if you set it in the past?