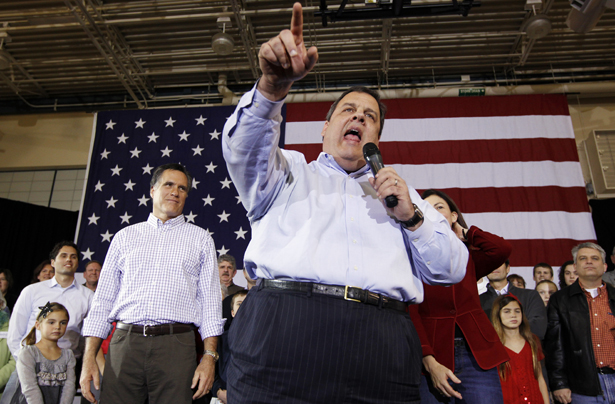 Bridgegate, Schmidgegate. That seems to be the view of an increasing number of Republican voters, and more and more GOP establishment types, as New Jersey Governor Chris Christie tries to put the Bridgegate scandal behind him. In New Hampshire—which is critical to Christie’s political future if he decides to run in 2016 because the Granite State has lots of moderate and centrist, non–Tea Party voters and allows independents to vote in the GOP primary—Christie is surging ahead of other challengers, according to a just-released WMUR poll, conducted by the University of New Hampshire:

National media pundits and major Republican donors may still be wary of the Bridgegate controversy dogging New Jersey Gov. Chris Christie, but potential Republican primary voters, it seems, have forgiven him. The latest WMUR Granite State Poll put Christie on top of all other potential Republican presidential candidates for 2016, but with a higher percentage of support than he had prior to Bridgegate. Christie’s 19 percent lead is up 10 percentage points from where he was in January when Bridgegate was leading the national news. In October, prior to the attention, he was at 16 percent. There appears to also be room to grow. When asked who their second choice was, Christie lead that group with 10 percent.

But the vast majority of Republicans in New Hampshire are undecided, and in any case none of this means that Christie is out of the Bridgegate woods. On Thursday, yet another top Christie aide will appear before the New Jersey legislative committee investigating Bridgegate, and the ongoing inquiries by the US Attorney and the Manhattan district attorney continue apace. But Christie, who apparently believes that he can’t wait for all of that to conclude, is stepping up his Hillary Clinton–like unannounced 2016 bid.

In his capacity as head of the Republican Governors Association, Christie is accelerating his travel schedule. (Since February, Christie Watch has closely followed Christie’s persistence in various polls and his recent travels, to Sheldon Adelson’s dog-and-pony show, to the Conservative Political Action Conference, to Ralph Reed’s Faith and Freedom event, to various establishment gatherings such as Mitt Romney’s get-together, and his record-setting fundraising pace.) Indeed, Christie’s RGA fundraising has reached more than $60 million since January.

According to The Record, the newspaper in Bergen, Christie’s travels are becoming more frenetic, especially to early 2016 primary states:

The media-savvy Christie, who won 61 percent of the vote in Democratic New Jersey, has already been to 20 states and the District of Columbia since becoming chairman of the governors group in November. By the end of the summer, he’ll have covered the four key early voting states—Iowa, New Hampshire, Nevada and South Carolina—with more than two dozen trips this year.… Since becoming chairman of the Republican Governors Association, Christie has also been to Utah, Nevada, Arizona, Florida, Massachusetts, Tennessee, Texas, Vermont and Illinois—all of which have their primaries or caucuses by mid-March.

And during July and August, reports The Record, Christie will visit fourteen more states. This week he’ll spend three days touring Iowa, according to the Des Moines Register, where the first caucus in the 2016 campaign will be held:

Potential 2016 presidential candidate Chris Christie’s trip to Iowa later this month will be a three-city swing, with three fundraisers. On Thursday, July 17, the outspoken New Jersey governor will be the star guest at a fundraiser for the Republican Governors Association at Kyle and Sharon Krause’s River House in Waukee from 9 a.m. to 10:30 a.m. Entrance requires a $25,000 minimum donation. Christie will do an afternoon fundraiser for Iowa House Speaker Kraig Paulsen in Cedar Rapids. And at 6:15 p.m., he’ll speak at a fundraising dinner for Gov. Terry Branstad at the Mississippi Valley Fairgrounds in Davenport. This event will be open to the public with the purchase of a $25 ticket.

Needless to add, in each state he visits while campaigning for various GOP gubernatorial candidates, Christie can pocket contacts with big Republican donors and key activists and politicians that he’ll need when and if he runs.

Other Christie trips this past week included a stop in Idaho for a meeting with tech billionaires and financiers, including Facebook’s Mark Zuckerberg, and to Nashville, Tennessee, for a meeting of the National Governors Association and the RGA.

The Star-Ledger, covering Christie’s Nashville stop, reports that America’s Democratic governors singled out Christie for sharp criticism, signaling perhaps their concern that Christie might be in the process of reviving his 2016 ambitions:

Unlike their Democratic counterparts, the RGA didn’t hold a news conference during the session and Christie was largely expected to stay out of the limelight. Political observers said ahead of the meeting that Christie’s performance and attention to detail beyond the purview of reporters and cameras is what would really matter for a governor working to rebuild his image after taking a hit with the bridge scandal. And if evidence was needed to show Christie may be successfully moving away from controversy, conference-goers needed to look no further than the statements of leading Democratic governors. Members of the Democratic Governors Association, during a news conference held a day before Christie arrived, all but targeted Christie as the poster child for what they described as the Republicans’ failed policies in statehouses across the country. It seemed as if the Democrats had set their sights on Christie even before he arrived in Nashville for the conference.