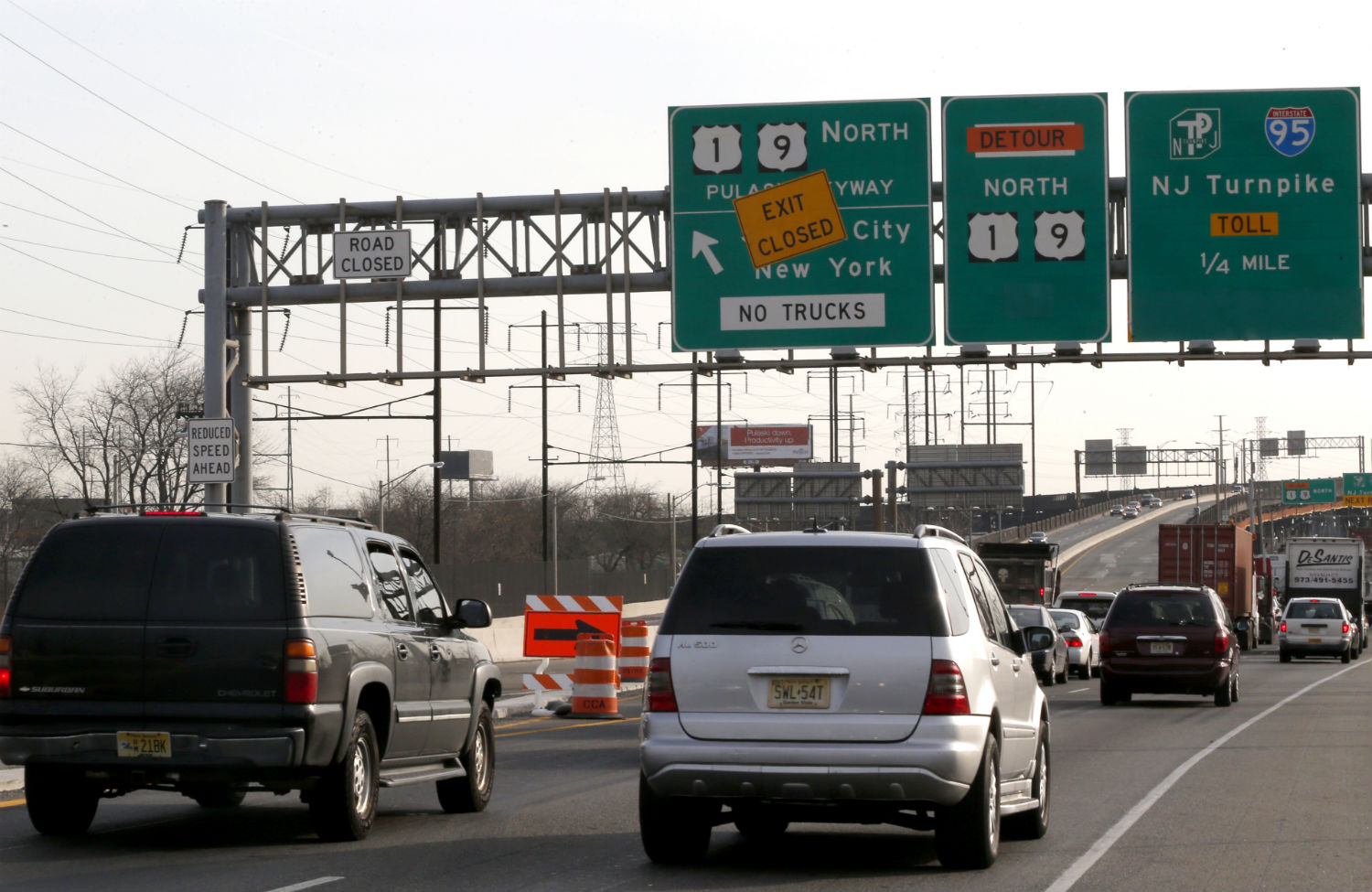 Vehicles ride near the blocked off entrance to the northbound side of the Pulaski Skyway in Newark, NJ. (AP Photo/Julio Cortez)

The George Washington Bridge lane closing scandal has put a significant crimp in Chris Christie’s chances of becoming the GOP’s standard-bearer in the 2016 presidential campaign. But it may be the closure of another bridge roadway, the northbound lanes on the Pulaski Skyway, that sinks it entirely. In April, half the Pulaski Skyway shut down for two years of repairs. The reconstruction of this eighty-two-year-old bridge is being financed by the Port Authority of New York and New Jersey. But as Christie Watch reported earlier, the legality of Christie’s Port Authority money grab, acquiesced to by New York Governor Andrew Cuomo, was questioned for many months by Port Authority lawyers, who were pressured ultimately into finding a legal justification for it. Now that justification and how it came about are under scrutiny by government investigators.

The Securities and Exchange Commission has launched an investigation into whether the Port Authority violated securities laws in allowing the funds to be used for the Pulaski Skyway, according to Lisa Brennan of Main Justice, an online publication that reports on the Department of Justice and the work of US attorneys nationwide. Two enforcement division lawyers in the SEC’s New York office are probing whether the agency committed fraud.

The issue is also among the topics being scrutinized by Manhattan District Attorney Cyrus Vance, says Main Justice. In mid-April The Wall Street Journal reported that Vance had subpoenaed Port Authority correspondence between top PA officials and the Christie administration.

In late 2010 Christie abruptly cancelled the multibillion-dollar ARC tunnel project connecting New Jersey and New York, despite the fact that groundbreaking had already taken place and there had been ten years of preparatory work. He was determined that the $1.8 billion that had been allocated to New Jersey for the tunnel by the PA instead pay for road and bridge projects in New Jersey. It was widely seen as a political move by Christie, who did not want to lose his tenuous credibility with conservatives by raising New Jersey’s gas tax, one of the lowest in the country. Christie’s view, according to The New York Times, was:

The tunnel “didn’t happen, and the money is there to be utilized,” Mr. Christie said. “It should be utilized for transportation projects to improve this state.”

But before he had the go-ahead from PA lawyers Christie announced at a press conference in January 2011 that he was going to use the PA money for internal New Jersey transportation systems, projects that its lawyers had serious questions about.

The PA can use money from its tolls and fares only for roads, bridges and tunnels considered part of its transportation network, unless the legislatures of both states agree to an exception. The Pulaski Skyway and related roadways are a key link between New Jersey’s largest city, Newark, and the Holland Tunnel that goes to New York City. But for historical reasons the Holland Tunnel and its feeder roads are outside the jurisdiction of the Port Authority.

Lawyers at the PA raised questions about Christie’s plan, according to an excellent investigative job by Shawn Boburg at New Jersey’s Bergen Record:

“I don’t think they consulted with us,” the official said. “If they had, we would have told them, ‘Hey, we can’t just write you a check.’ We do projects associated with Port Authority facilities. That’s what bondholders expect us to do.”… There was “absolutely no support” for the argument that the Port Authority could “write a check” to New Jersey’s Transportation Trust Fund, wrote Carlene McIntyre, assistant general counsel of the agency.

But Christie and his staff continued talking up the PA funding for the projects and his henchmen at the PA, under the watchful eye of former deputy executive director Bill Baroni, pressed the lawyers to figure some way to find a legal basis for it. According to the Record, Baroni wrote to the lawyers, “It’s evident to say, but we gotta figure this out.”

As Christie Watch was told by former PA officials, Christie sent an implicit message through his operatives to the staff: “I’m the governor, this is the number-one thing I want and it’s my money and you have to find a way to get it done.” There was little objection from the New York side of the agency, as the New Jersey staff was much more numerous and powerful than the New York contingent, and New York officials were mostly concerned with getting their own share of the PA funds for their prime project, rebuilding the World Trade Center. Christie ultimately had his way. The legal staff declared the Pulaski Skyway and related roadways connectors to the Lincoln Tunnel, over which the PA had control, even though the tunnel was miles away. The lawyers warned it might open the PA up to lawsuits from bondholders. As the Record reported:

“It can be argued” that the four roads feed into the Lincoln Tunnel, [assistant general counsel Carlene] McIntyre wrote in a memo on March 28. “However, it is important to note, that this statutory construction is not without doubt and may raise questions in the minds of some. The looser the statutory construction means the greater the risk of a successful challenge by the bondholders and the investors,” she wrote.

In January the PA issued $l billion in bonds, calling the Pulaski Skyway “a Lincoln Tunnel Access Infrastructure Improvement,” in the issuing documents. Now the SEC and District Attorney Cyrus Vance are looking into the legality of that.

Asked about the SEC review Christie hid behind the PA lawyers and his legal staff, reported the Newark Star-Ledger:

Meanwhile, Vance also sought information on the rebuilding of the World Trade Center, in which another commissioner, Anthony Sartor, has been heavily involved. Sartor resigned within weeks of Vance’s subpoenas. Sartor was appointed by Republican Christine Todd Whitman back in 1999, reappointed by Democrat Jon Corzine and allowed to continue past his term by Christie.

Sartor chaired the World Trade Center committee, had an office next to the Port Authority career staff overseeing the rebuilding efforts, and, though former Port Authority officials told Christie Watch “commissioners are usually removed from the day to day involvement,” had an unusually hands-on role with PA activity.

Sartor, who heads the engineering firm Paulus, Sokolowski and Sartor LLC, was involved “in procurement, architectural and construction contracts,” they noted, adding that staff would go to his office about which items would go to the Port Authority Board and which didn’t, along with the timing and scheduling of work.

When these issues came before the commissioners for a vote, Sartor often recused himself, more than any other commissioner, as Shawn Boburg reported in the Bergen Record last year. But he did not shy away from playing a part at the meetings where the issues came up. And raising more questions is the fact his engineering firm has partnered with some of the leading companies engaged in World Trade Center work, including Skanska, a client of David Samson’s firm, Wolff & Samson. Samson, a Christie crony and former chairman of the PA, who resigned in April under pressure, has lately refused to cooperate with the New Jersey legislative committee investigating Bridgegate.

Sartor first came under scrutiny in 2008 when engineering firm STV Incorporated, which held significant World Trade Center contracts and hoped for more, was in discussions to buy Sartor’s engineering firm. The talks fell apart when the negotiations became public.

Back in 2001 Sartor, whose firm had millions in state contracts, gave a $150,000 loan to the then–Acting Governor Donald DiFrancesco, who resigned soon after the loan became public.

Sartor’s firm has also done extensive work in South Jersey, where little gets done without the blessing of political kingpin George Norcross.