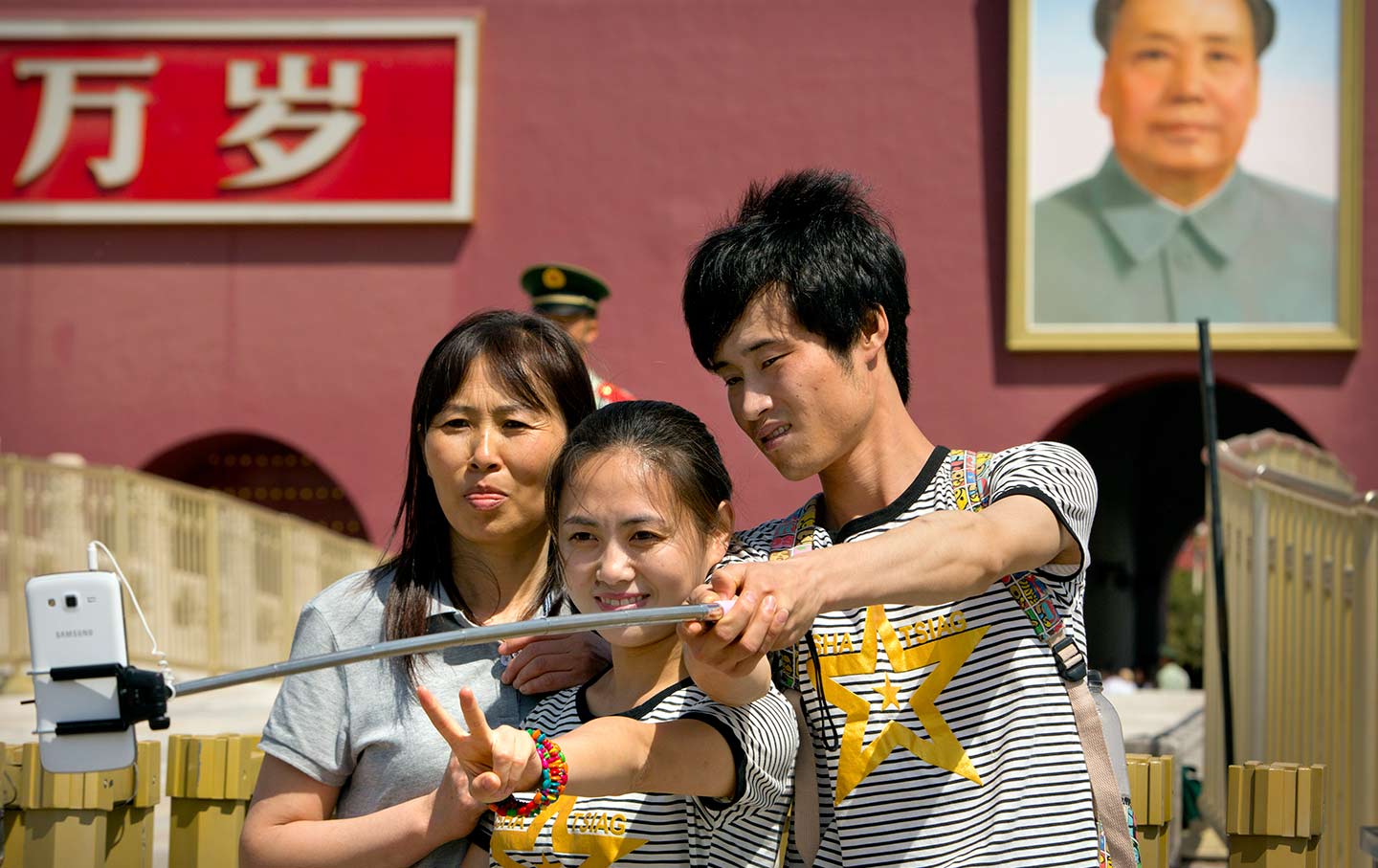 Tourists take a photo of themselves in front of a large portrait of Mao Zedong on the Gate of Heavenly Peace near Tiananmen Square in Beijing. (AP Photo/Mark Schiefelbein)

For Cassie, a 34-year-old Chinese woman from the city of Chengdu in Sichuan province, visiting Taiwan has always been a dream. It was her hope that she would finally be able to travel there around the coming New Year (her name has been changed at her request because of risks incurred by Chinese citizens speaking with foreign media).

But in August, her plans, and those of thousands of other independent travelers were thwarted when the Chinese government announced a ban on giving permits to solo travelers to visit Taiwan. The reason? Taiwan has presidential and legislative elections on January 11, with the main race pitting incumbent President Tsai Ing-wen of the left-wing, independence-leaning Democratic Progressive Party (DPP) against challenger Han Juo-yu of the China-leaning, right-wing Kuomintang (KMT).

The impact was immediate, with the number of Chinese tourists visiting Taiwan plunging by 60 percent in September as compared to the previous year. “The purpose of doing this is as an intimidation tactic, a means to threaten Taiwan economically, and control the amount of tourists going during election season,” said Lev Nachman, a Fulbright research fellow studying social movements and party politics in Taiwan.

While limiting tourism ahead of elections might seem strange, the comings and goings of unsuspecting tourists play a key role in China’s plans for economic coercion. Cassie’s forced choice could have broad repercussions for geopolitics in Asia, as tourism is now a major economic driver in many countries. 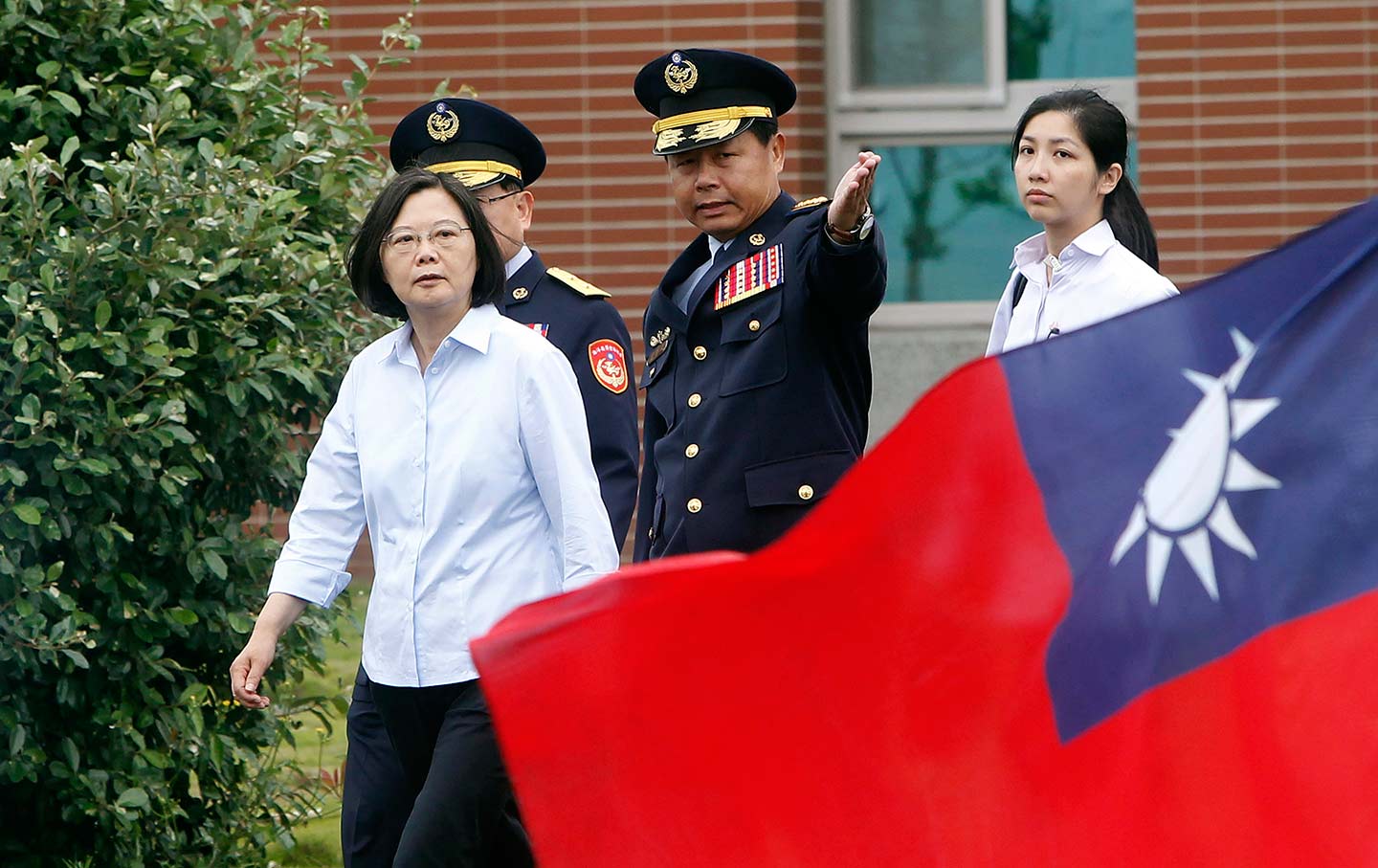 Over the past decade, China has developed from a minor player into the most important country of origin for tourists across the Asia-Pacific region. In 2018, 150 million Chinese went abroad, and that number is expected to grow to an astounding 400 million by 2030—a full half of all outbound travelers’ growth worldwide. Whether it’s Japan, Thailand, Taiwan, Singapore, or Bali, Chinese are now often the largest inbound group of tourists—and, in many cases, spend far more per visitor than their Western or Asian counterparts.

The ability to control tourists is a unique tool developed by the Chinese Communist Party, as it can, unlike the United States, Japan, or any other country, directly influence where citizens travel. The main lever of control is travel agencies that arrange group tours. In fact, many of China’s major tour companies have close ties to the government, meaning that when a decision is made to restrict travel to a certain country, these companies often fall in line. But even solo travelers often have to get permission from their workplaces, or official exit permits to leave the country. Some, like Tibetans and Uyghurs, cannot even obtain passports anymore.

“China just has historically controlled the movement of its citizens in ways that other countries cannot,” said Evan Rees, Asia-Pacific Analyst at Stratfor.

The first large-scale use of this power took place back in 2017, when South Korea decided to deploy the US missile system THAAD, against the wishes of China, who reacted swiftly and strongly. Alongside the expected reactions—restrictions on South Korean businesses, trade, and the cancellation of K-Pop concerts, came restrictions on group tours. In the coming months, South Korea saw a sudden, 40 percent plunge in Chinese tourists—who’d previously accounted for nearly 50 percent of all arrivals into the country. This severely hurt the industry and the national economy. It’s likely that China wants to see a similar impact in Taiwan.

“It’s a threat to Taiwan, that they could turn the taps off on all tourism, if they wanted to,” said Rees.

Like for South Korea, the real impetus behind the move regarding Taiwan is political. The nature of this move, though, shows a new evolution of this power, coming just as more and more Chinese are traveling independently. A decade ago, the vast majority of Chinese went on group tours, making it relatively easy for the government to indirectly influence their decisions. But this move comes as 40 percent of Chinese are no longer going on group tours.

“This ban is unique in that it is against solo travelers, a more subtle use of the tool,” said Rees.

There’s a growing body of evidence showing that China is seeking to influence elections overseas in places like Australia and Canada, with Taiwan being of special interest because of its political status. Last year’s midterm elections saw pro-Han Facebook groups, media interference, and even tourism promotions. Many observers believe that China wants to throw its weight behind Han and the KMT, and the tourism ban is aimed at aiding his candidacy by putting greater economic pressure on Tsai.

“It’s much more about trying to signal some sort of economic threat,” said Nachman. “[This] gives the KMT fuel during the election.”

Many political analysts believe that the tourist ban is just one of many ways China will seek to influence the election and support Han’s candidacy. The choice it wants Taiwanese voters to make is whether independence is worth the cost of losing China-backed economic growth, symbolized through tourism. It was a similar choice as one voters faced in 2016.

There’s another issue at play too. The anti-extradition, pro-democracy protests in Hong Kong have become a major issue in Taiwan, with President Tsai regularly speaking in support of protesters’ demands. Hong Kong is a special administrative region of China, with its own border control and separate passports for citizens, and most Chinese do need to get permits to visit. Like Taiwan, Hong Kong has also seen a dramatic drop in Chinese inbound arrivals, though it’s likely the protests themselves, which have disrupted transportation and logistics, are the primary reason for this.

However, with regular solidarity rallies and several “Lennon Walls” across Taiwan, limiting exposure to counter-perspectives to the increasingly military one pushed forth by Chinese state media could be another reason to limit Chinese traveling to Taiwan.

“Limiting independent travelers’ access to free and open media during an election season in Taiwan and a protest season in Hong Kong…is a possible purpose of the ban,” said Ian Rowen, an Assistant Professor at Nanyang Technological University in Singapore.

Taiwan’s experiences shows how risky economic dependence on China can be. But it also shows there are alternatives to quiet acquiescence. With knowledge of China’s obvious disdain for her presidency, the Tsai administration likely knew something like this was going to happen. Thus, it prepared to soften the blow by diversifying the economy away from China, promoting investments by Taiwanese companies in South and Southeast Asia, and increasing student and scholar exchanges.

Tourism was key to this, too, and Taiwan eased visa requirements and promoted the country as a destination for Southeast and South Asians. Whereas fewer Chinese travelers arrived in the past few years, they were more than replaced by Filipinos, Indonesians, and Vietnamese, so much so that 2018 still saw a record number of arrivals. In spite of the ban, 2019 might break records, too, as the government seeks to increase the arrivals of Japanese and Korean visitors.

For other countries in Asia also seeing greater dependence on Chinese tourism, mimicking Taiwan’s southern strategy and diversifying its inbound traveler base could a way to limit the impact of a future ban or retaliatory actions. If Taiwan can free itself from dependence on China despite its complicated history, interdependence, and unique relationship, it gives hope to anyone.

As for Cassie? She, like many young urban Chinese, has no interest in a group tour to Taiwan, which are often run by Chinese companies and allow for little freedom. So she’s decided to visit Japan instead. Due to the trade war with the United States and ongoing issues around the legacy of colonialism in South Korea, Japan has mended its relationship with its neighbor, and been rewarded with a flood of Chinese travelers.

“As tourist numbers from South Korea have been way down in the last few months, China has signed a deal with Japan for more direct flights to different airports,” said Rees. “China has been able to fill that gap and help Japan.”

It is a risky proposition for a country that has a long history of disputes with its larger neighbor. When it comes to dealing with China, nothing—not even tourism—is off-limits to manipulation by the increasingly authoritarian ruling regime.