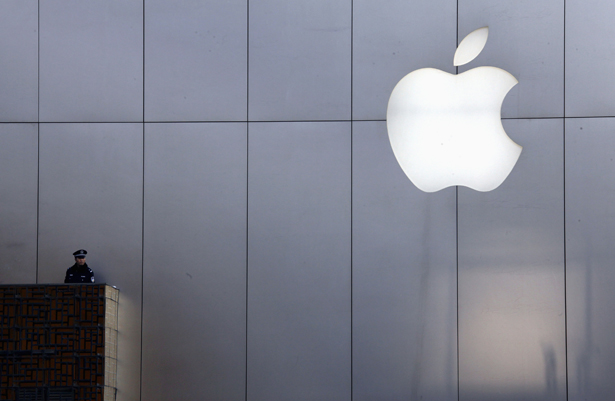 A policeman looks out from a balcony as the crowd is dispersed from the front of an Apple store in the Beijing district of Sanlitun January 13, 2012. (AP Photo)

Beginning in January of 2012, The New York Times once again proved its worth as the world’s greatest newspaper with a comprehensive, multipart investigation of Apple that shed light on the working conditions on the company’s Chinese manufacturing lines. It found near-slave-labor conditions, including apparently forced labor by student “interns” at Foxconn, Apple’s largest supplier (and the supplier for a host of other tech companies as well). Exposure to poisonous chemicals and the occasional fatal factory explosion were hardly unknown to workers and their families.

Before the Times investigation, Apple successfully stonewalled reports about these unconscionable conditions. Sounding like a Stalin-era Soviet commissar, Steve Jobs claimed that Apple did “one of the best jobs of any companies in our industry, and maybe in any industry, of understanding the working conditions in our supply chain…. I mean, they’ve got restaurants and movie theaters and hospitals and swimming pools, and I mean, for a factory, it’s a pretty nice factory.”

The Times investigation produced results—or at least it appeared to. Tim Cook, who replaced Jobs as Apple CEO shortly before the latter’s death in October 2011, hired the Fair Labor Association to investigate Foxconn. It found widespread violations of China’s own relatively lax labor laws, including workweeks exceeding sixty hours, sometimes for eleven days in a row. The FLA report announced that Foxconn would recruit “tens of thousands of extra workers” to lighten the load and end the mistreatment of student “interns.” Foxconn also pledged to raise worker salaries by 16 to 25 percent, to roughly $400 a month.

If the story concluded there, it would have had a happy ending. But the closer one looks, the larger the words “Potemkin village” begin to loom in one’s mind. Recently, the Times reported on the death of a 15-year-old Chinese laborer named Shi Zhaokun, who was working for the Pegatron Corporation making iPhone 5Cs. (China’s minimum work age is 16.) The fifth Pegatron worker to die in recent months, Shi was on the job for twelve hours a day, sometimes six days a week. This is not uncommon on the Apple assembly line today. According to Isaac Shapiro of the Economic Policy Institute and Scott Nova of the Worker Rights Consortium, following the announcements in 2012, “progress has been scant in fundamental areas and critical promises have apparently gone unfulfilled. Unfortunately, it is still accurate to describe Apple’s supply chain as rife with labor rights abuses.” One of the main problems is that the FLA focused its efforts exclusively on Foxconn. Meanwhile, conditions at Pegatron (Apple’s second-largest supplier) and every other Apple production facility continue to be ignored. Shapiro and Nova note that China Labor Watch released a report in July that found widespread violations of the specific commitments in Apple’s code of conduct at Pegatron, including “the significant misuse of underage workers” as well as “forced and uncompensated overtime.”

What’s more, the alleged improvements at Foxconn often appear to be just that: alleged. According to Shapiro and Nova, on March 29, 2012, the FLA promised that compensation would “increase enough to offset any reduction in overtime hours; that Foxconn and Apple would provide retroactive pay” for overtime; and that the companies would determine the amount of compensation necessary to allow workers to provide for their basic needs, which were not being met. And yet, not only has no progress been reported on any of these measures, but the FLA no longer appears even to be interested in their status: its most recent report contains no mention of these commitments one way or the other.

The FLA, moreover, trumpets cosmetic changes in worker representation, while ignoring the fact that these companies continue to stand in the way of creating genuinely independent labor unions. I left repeated messages for the FLA’s press officer, but these were not returned.

The success of Apple’s propaganda smokescreen demonstrates the crucial importance of dogged reporting like that of the Times in what is rapidly becoming the world’s most powerful economy. Unfortunately, what used to be called the “Chicom” government is dragging its feet on renewing the visas of journalists from organizations including Al Jazeera, Reuters and the Times. Bloomberg News apparently went so far as to exercise self-censorship to please its Communist hosts, spiking a story about official corruption. But the Times has maintained its tough standards, sticking to coverage of high-level corruption, including an ongoing scandal in which JPMorgan Chase hired family members of top Chinese officials as a means of both currying favor and paying informal (and deniable) bribes to secure special treatment—exactly the story that was reported but not run by Bloomberg. Again, it was a reminder of why newspapers are the lifeline of a democratic society—in the Times’s case, anyway—but the Chinese appear to believe that their newfound economic might, along with their rapidly expanding military and diplomatic leverage, can free them from the nuisance of democratic accountability.

This would be a tragedy for more than a million Chinese workers—including the student “interns” living lives of near-enslavement in order to meet Apple’s production quotas and help maintain that company’s tremendous profit margins and aura of capitalist hipness. Then again, when one considers the example of Steve Jobs—who died with an undistributed fortune estimated at $8.3 billion, and who allowed for Apple’s untold mountains of cash reserves to be parked in the tax haven of Reno, Nevada, while enjoying the good offices of the taxpaying community of Cupertino, California—one can’t say that the Chinese government hasn’t learned from the best.