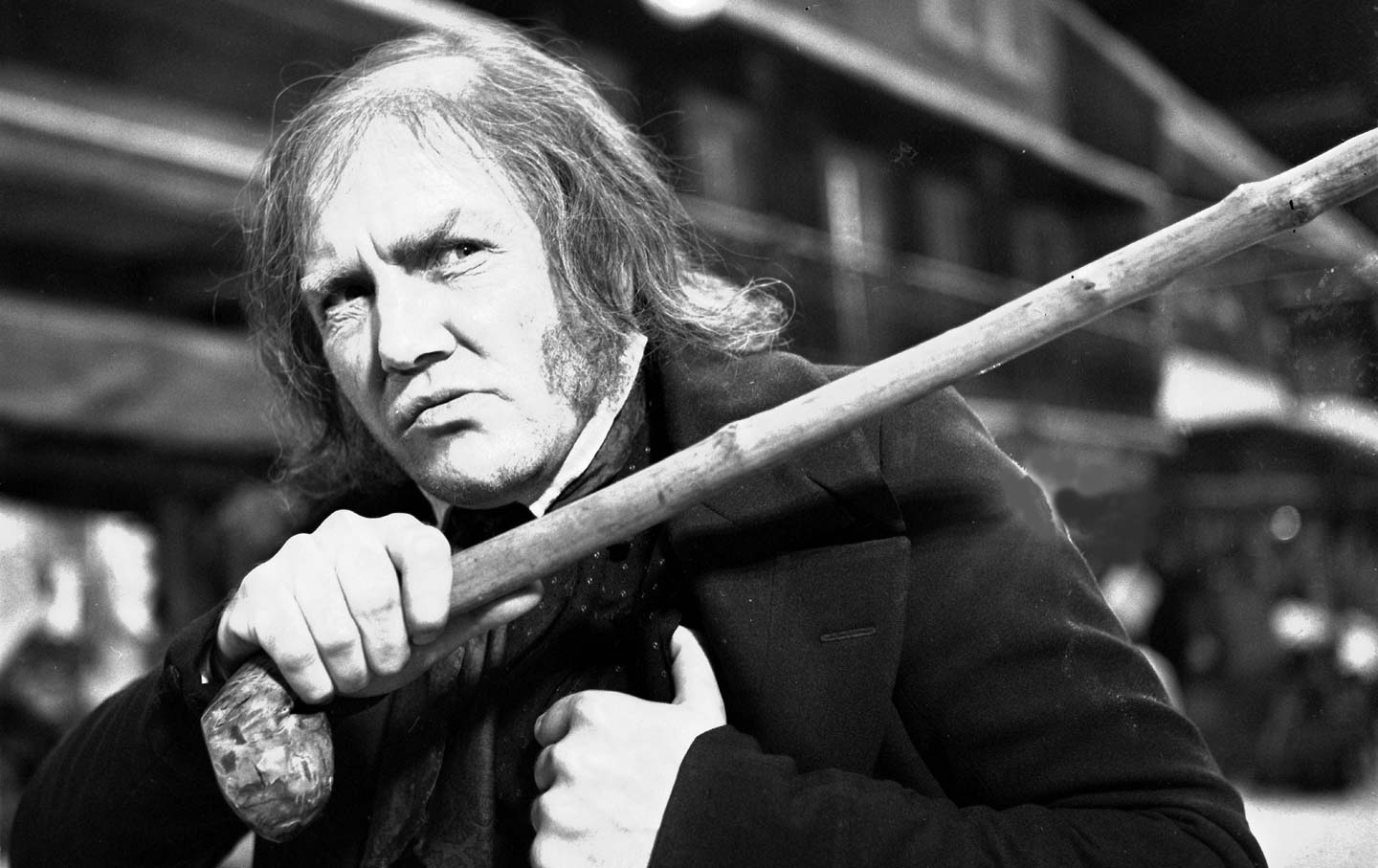 Charles Dickens might, at his most creative, have imagined a billionaire president-elect who made a career of bashing immigrants and refugees, and who surrounded himself with sycophants who griped about the minimum wage and minimal workplace protections.

Perhaps the author would have told a story of gentle humanitarians stumbling into the billionaire’s counting house and appealing to his “liberality.” At that point, the Dickensian tale could have followed predictable lines:

At the ominous word “liberality,” Scrooge frowned, and shook his head, and handed the credentials back.

“Are there no prisons?” asked Scrooge.

“Plenty of prisons,” said the gentleman, laying down the pen again.

“And the Union workhouses?” demanded Scrooge. “Are they still in operation?”

“They are. Still,” returned the gentleman, “I wish I could say they were not.”

“The Treadmill and the Poor Law are in full vigour, then?” said Scrooge.

“Oh! I was afraid, from what you said at first, that something had occurred to stop them in their useful course,” said Scrooge. “I’m very glad to hear it.”

“Under the impression that they scarcely furnish Christian cheer of mind or body to the multitude,” returned the gentleman, “a few of us are endeavoring to raise a fund to buy the Poor some meat and drink and means of warmth. We choose this time, because it is a time, of all others, when Want is keenly felt, and Abundance rejoices. What shall I put you down for?”

“I wish to be left alone,” said Scrooge. “Since you ask me what I wish, gentlemen, that is my answer. I don’t make merry myself at Christmas and I can’t afford to make idle people merry. I help to support the establishments I have mentioned—they cost enough; and those who are badly off must go there.”

“It’s not my business,” Scrooge returned.

So Dickens began his “Christmas Carol,” a tale of the 1843 holiday season that was quite in keeping with the radical tenor of a time when the world was awakening to the truth that poverty and desolation need not be accepted by civil society—or civilized people. The language employed by Scrooge was not merely a Dickensian construct; rather, it was reporting of sorts on the political sentiments of those who opposed burgeoning movements for reform and revolution, which were sweeping through Europe as the author composed his ghost tale.

Ultimately an optimist, Dickens imagined that spirited prodding from the ghosts of Christmas Past, Present and Future would change Scrooge—just as there are those today who imagine that a bit more enlightenment might cause even the most rigid Ayn Rand reader to reconsider his worldview.

In Scrooge’s case, a little otherworldly pressure did the trick. After his unsettling Christmas Eve, the formerly conservative businessman hastened into the streets of London and displayed a fair measure of liberality—promising aid to the poor so generous that it shocked the anti-poverty campaigner the businessman had so recently dismissed:

“If you please,” said Scrooge. “Not a farthing less. A great many back-payments are included in it, I assure you. Will you do me that favor?”

Dickens tells us Scrooge was frightened into such humanity that he now thanked the gentleman who asked him to open his wallet in order to “make idle people merry.” The poor were suddenly the miser’s business.

And he was a better man for it.

Indeed, notes Dickens: “He became as good a friend, as good a master, and as good a man, as the good old city knew, or any other good old city, town, or borough, in the good old world. Some people laughed to see the alteration in him, but he let them laugh, and little heeded them; for he was wise enough to know that nothing ever happened on this globe, for good, at which some people did not have their fill of laughter in the outset; and knowing that such as these would be blind anyway, he thought it quite as well that they should wrinkle up their eyes in grins, as have the malady in less attractive forms. His own heart laughed: and that was quite enough for him.”

There have been no reports of ghostly doings at Trump Town or Mar-a-Lago this holiday season. So it falls to us to do the work—by our example and our activism—of awakening a spirit of charity among those who whip up furies against industrious immigrants, who callously dismiss the poor as a burden and who imagine the unemployed and under-employed as slackers who are best forced by hunger to grab at bootstraps and pull themselves upward. Let us get about it. If liberality did not prevail in 2016, then let us rededicate ourselves to its advancement in 2017—recognizing that the duty of humanity does not end with an electoral disappointment. It begins.