Diego Garcia, the largest island in the Chagos archipelago and site of a major United States military base in the middle of the Indian Ocean. (Reuters)

The Chagos archipelago stretches more than 200 miles in the middle of the Indian Ocean; it is about 1,000 miles south of India, and even further from the Seychelles and Mauritius. The 55 little islands have a total land area of only 25 square miles, smaller than the city of Paris, and no longer have any native inhabitants. Yet in June 2017 the UN General Assembly voted to ask the International Court of Justice (ICJ) to rule on the validity of their detachment in 1965 from the territory of Mauritius, which became independent three years later. Former Mauritian president Anerood Jugnauth, testifying this September in support of his country’s claim of sovereignty over the islands, told the ICJ that the territorial division had been accepted “under duress.”

The as-yet-uninhabited islands were discovered by the Portuguese in 1512, and later passed to the Dutch (1598–1710). Under French rule (1715–1814), the first African slaves were brought to work on coconut plantations. The United Kingdom took possession at the end of the Napoleonic wars, and still controls the islands under the name British Indian Ocean Territory. Their incomplete decolonization is a human tragedy.

During the Cold War, the Indian Ocean was of strategic importance. Following the theories of Halford Mackinder, father of geopolitics, the United States aimed to control the world’s “maritime lands” in order to contain the powers of the “heartland” (at that time the Soviet Union). During the Vietnam War, Washington realized that a base on the 11-square-mile island of Diego Garcia, at the southern tip of the archipelago, would allow it to intervene across a large part of the globe, and control major sea-transport routes for hydrocarbons and raw materials.

In the context of the United States’ “special relationship” with the UK, secret talks concluded in 1966 with an “exchange of notes,” which constituted an agreement but did not require British parliamentary approval. The UK leased Diego Garcia to the US for 50 years. In response to the Soviet invasion of Afghanistan in 1979, US President Jimmy Carter proclaimed that any attempt to gain control of the Persian Gulf region would be considered an attack on vital US interests. This “Carter doctrine” led the United States to strengthen its presence in the region, and gave a key role to the Diego Garcia naval and air base, operational since 1977.

The US Has Military Bases in 80 Countries. All of Them Must Close.

Since the end of the cold war, new military and strategic objectives have made Diego Garcia a vital link in the US’s chain of defenses, which in the eyes of the military justifies the tacit renewal of the lease for 20 years in 2016. The objectives include the Gulf war of 1990–91, operations against the Taliban in Afghanistan since 2001, the invasion and occupation of Iraq from 2003 to 2011, and the fights against piracy and Islamic State in recent years. Being far from prying eyes made Diego Garcia ideal for a secret CIA detention facility, established after 9/11 with the UK’s consent.

The Diego Garcia lease needed to be secured by an agreement with the new Republic of Mauritius. Under the Lancaster House agreement of September 1965, the representatives of Mauritius, including its first prime minister, Seewoosagur Ramgoolam, were forced to give up the Chagos islands in exchange for financial compensation, fishing and marine-resource-exploitation rights, and a promise that the territory would be handed back once the defense installations built there were no longer needed.

Mauritius gained its independence in 1968, with a territory comprising the main island, Rodrigues, St Brandon, and Agaléga, but not the Chagos islands, whose legal status became complicated. They remained under the control of the UK, which granted Mauritius maritime rights and the US land rights. Since 1980, Mauritius has contested the Lancaster House agreement as unfair, if not illegal, on the principle of inviolability of borders inherited from the colonial period. The African Union and the Non-Aligned Movement—especially India and Sri Lanka—support Mauritius, with the aim of making the Indian Ocean a “zone of peace,” implicitly referring to the base on Diego Garcia.

After 200 years of immigration from France, Africa, India, and Madagascar, the almost 2,000 inhabitants of the Chagos archipelago were an unusual population, living on the island groups of Diego Garcia, the Salomons, and Peros Banhos. During negotiations with the British, US officials insisted on “exclusive control (without local inhabitants).” The islanders, who in their French-based Creole call themselves îlois, were gradually forced out: Anyone who left the island for medical treatment or a holiday was prevented from returning; the flow of food and medical supplies was restricted; and the islanders’ dogs were poisoned or gassed. In 1973 the last residents were ordered onto cargo ships bound for the Seychelles and Mauritius, where they live in lamizer (poverty) and sagren (sorrow), treated as pariahs.

In the 1990s they began a long campaign to challenge the legality of their deportation and win the right to return. Through the Chagos Refugees Group, they explored every legal avenue in UK and US courts. The UK offered financial compensation and British citizenship on condition that they renounced all rights to pursue claims against the crown; about 1,000 settled in the UK. But by accepting compensation, the Chagossians lessened their chances of success in future court cases; their latest claims were rejected by the European Court of Human Rights in 2012 and the UK Supreme Court in June 2016. Cases filed in US courts challenging the decision to establish the military base were also thrown out, on the grounds that this was an act of state, non-justiciable under the principle of separation of powers. 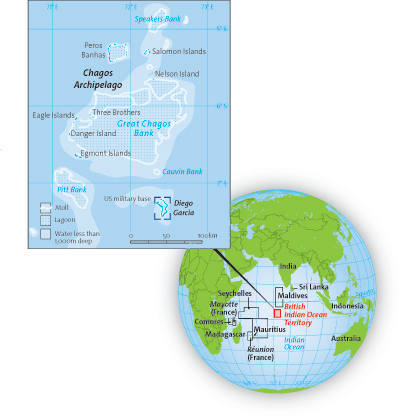 The belated official regrets expressed by Alan Duncan, UK minister of state for Europe and the Americas, who called the deportations a mistake in November 2016, did little to appease the Chagossians, whose hope is now for recognition of Mauritian sovereignty over the archipelago. Like the Western Sahara dispute, the Chagos question stems from unfinished decolonization and a territorial dispute with the former colonial power.

The first opportunity to take the dispute before the courts was in 2010, after the UK decided, without consultation, to create a marine protected area (MPA) around the archipelago. The British government claimed the ban on the exploitation of animal or mineral resources was needed to protect the environment. But a diplomatic cable sent by the US embassy in London, published by WikiLeaks, reveals that the decision was not really ecologically motivated. It cites a statement by a senior official of the UK Foreign and Commonwealth Office that it would be difficult, if not impossible, for the former islanders to pursue their claim for resettlement if the archipelago became a marine reserve. Another official assured the United States that there would be no constraints on military operations.

Support from the South at the UN

The creation of an MPA was designed to foil any potential plans to return by depriving the Chagossians of their only means of subsistence: fishing. It is no surprise that Mauritius applied to the International Tribunal for the Law of the Sea, claiming that the UK initiative would deny it the rights it had been granted to exploit the resources of the archipelago. The tribunal found in March 2015 that the UK had failed to meet its commitments to Mauritius under the Lancaster House agreement, and was not entitled to create an MPA. But though it recognized the asymmetry of relations between the three countries concerned, the tribunal avoided the fundamental issue of sovereignty or recognizing the Republic of Mauritius’s status as a “coastal state.”

After this setback, Mauritius decided to raise the issue on the international stage. The UN General Assembly had, as early as 1965, condemned the detachment of the archipelago from Mauritius and called on the UK to “take no action that would dismember the territory of Mauritius and violate its territorial integrity.” Last June, it decided by 94 votes to 15, with 65 abstentions, to ask the ICJ to give an advisory opinion—“a dangerous precedent,” in the words of the UK representative. The court would be asked whether “the process of decolonization of Mauritius [was] lawfully completed when Mauritius was granted independence in 1968,” and to consider “the consequences under international law…arising from the continued administration by the [UK] of the Chagos archipelago, including with respect to the inability of Mauritius to implement a programme for the resettlement on the Chagos archipelago of its nationals.”

A breakdown of the vote reveals significant support for this resolution from the South (Algeria, Argentina, Brazil, Cuba, Egypt, India, Malaysia, Nigeria, Pakistan, the Philippines, Saudi Arabia, South Africa, and Vietnam). As expected, it was opposed by US and UK allies (Afghanistan, Australia, Iraq, Israel, Japan, South Korea, and France, which also detached Mayotte from the Comoros); China and Russia no doubt abstained because they have reservations about appeals to international courts to settle territorial disputes, which they could face over Crimea or the China Sea islands.

Because of its geopolitical and economic implications, the significance of the Chagos question goes beyond Anglo-Mauritian relations, and its outcome is uncertain. To the UK and the US, Diego Garcia contributes to global security and helps to fight “hybrid threats” (terrorism, piracy, international crime) that could affect access to the Red Sea and the Gulf; will these interests prevail over human rights?