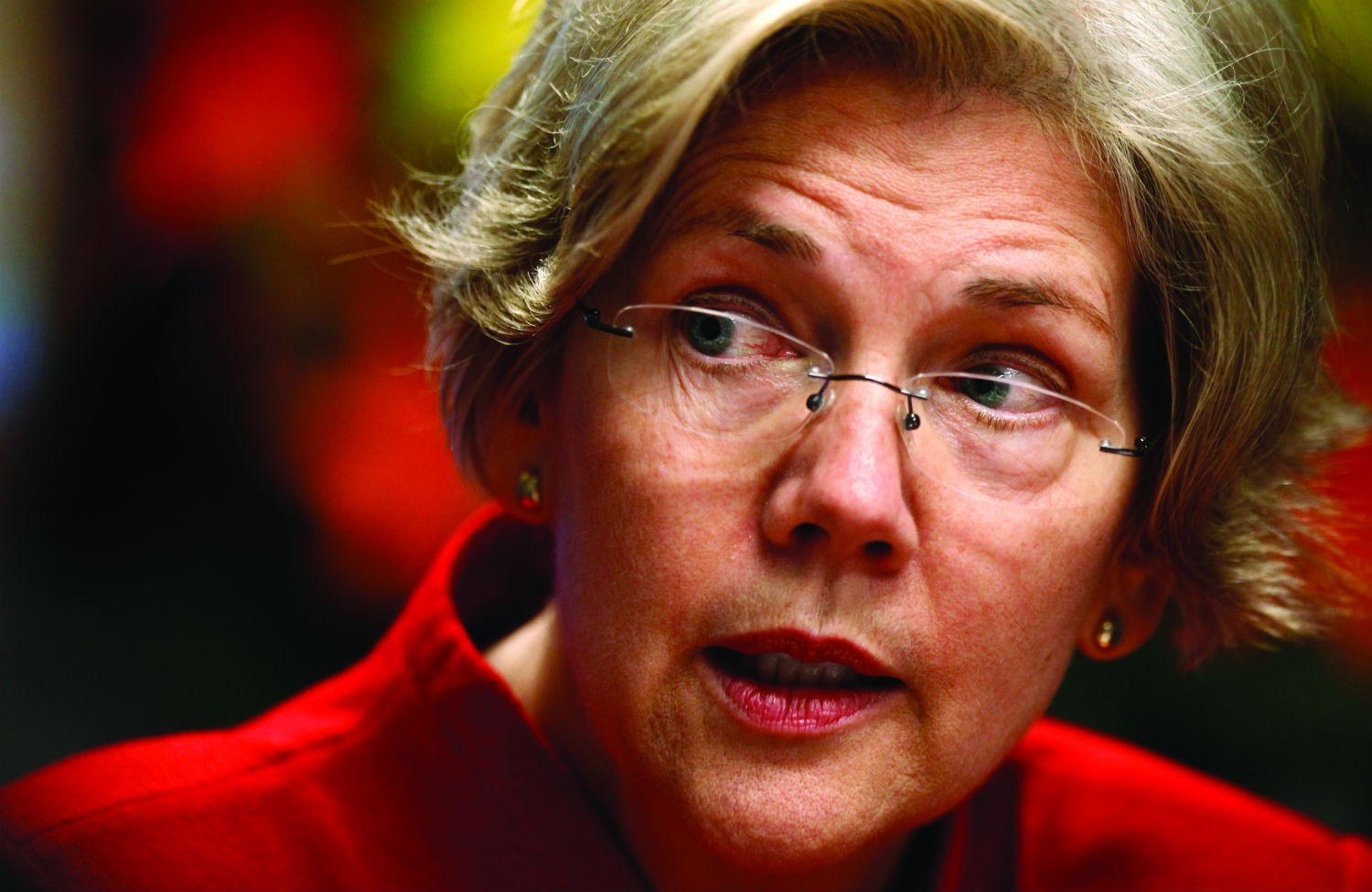 It is no secret that, should Hillary Clinton decide to mount a White House bid in 2016, she is well positioned to become the first woman president of the United States. It is hard to find a pollster who does not share the view of veteran Democratic analyst Doug Schoen: “Clinton not only leads the Democratic field in polls but also leads potential Republican challengers.”

To be specific, according to the latest NBC News poll, Clinton is the favored candidate of 66 percent of prospective 2016 Democratic primary voters. Her appeal cuts across demographic lines, taking in those who view her candidacy as “historic,” those who share her views and those who simply see her as a winner. Just 14 percent opt for an alternative at this point. (In a Public Policy Polling survey from earlier this month, Clinton’s at 67 percent among Democrats) In NBC’s hypothetical November 2016 pairing, Clinton beats the “hot” Republican prospect of the moment, Chris Christie, by a 10 point margin nationally. “Clinton [is] benefiting from the same demographic trends that helped propel President Barack Obama to win the election in 2008 and re-election in 2012,” argues a poll analysis, which also suggests that “other prominent Democrats would likely avoid the race if Clinton decides to throw her hat into the ring.”

But if Hillary Clinton does not run, or if she runs poorly, does that mean that there will be no woman bidding for the presidency?

In addition to the men whose names get tossed around—Vice President Joe Biden, New York Governor Andrew Cuomo, Maryland Governor Martin O’Malley, former Montana Governor Brian Schweitzer and some have even suggested Vermont Senator Bernie Sanders (though he proudly sits as an independent) —there are a number of prominent Democratic women whose names have surfaced as potential contenders: Minnesota Senator Amy Klobuchar, New York Senator Kirsten Gillibrand and, above all, Massachusetts Senator Elizabeth Warren.

There’s been a flurry of speculation this week—in a New Republic piece, in Bloomberg BusinessWeek and in Capital Hill journals such as The Hill and Politico—about the prospect that Warren might challenge the Clinton from the left for the Democratic nod. Warren does not appear to be stoking the speculation. She joined all sixteen Democratic woman in the Senate to sign a “secret” letter, circulated earlier this year by California Senator Barbara Boxer urging Clinton to run. That fits with Warren’s public pronouncements; asked in May by The Boston Globe if she might seek the nomination, Warren responed: “No, no, no, no.”

Pressed on whether that was a “definite no,” Warren replied: “No, no, no, no, no”—adding another “no” for emphasis.

But Warren would not be the first presidential “no” who became a “yes.”

Circumstances change over the long arc of America’s endless campaigns. Frontrunners decide not to make races, or stumble along the course of the campaign. There are a fair number of progressives who would love to see Warren take on Clinton. There are even more who want her at the ready should Clinton drop back or fail to gain traction.

But Warren is not just a fall-back contender—or even a progressive alternative to the centrist Clinton. She is more than just a prospective candidate. She is a purveyor of ideas, whether advanced on the campaign trail or in the Senate, that really do make her what Politico suggests: “Wall Street’s Nightmare.”

What is appealing about the prospect of a Warren bid—against Clinton or in a race without Clinton—is the determination of the Massachusetts senator to reach far beyond the traditional space filled by centrist and even liberal Democrats. She goes to where Bill de Blasio went in a progressive populist bid that swept him into New York’s mayoralty with an almost fifty-point margin of victory.

Warren’s message, in the Senate and beyond, is that Democrats can and should have an economic agenda that speaks to the great mass of Americans.

And when she delivers it, as she did at last summer’s AFL-CIO convention in Los Angeles, she can and does sound like a very appealing presidential prospect.

Warren, the country’s best-known advocate for regulation of Wall Street and the big banks who conceived and organized the establishment of the US Consumer Financial Protection Bureau before her election in 2012 to the US Senate, kicked off the labor convention an address that was equal parts William Jennings Bryan, Mother Jones and Franklin Delano Roosevelt.

“Our agenda is America’s agenda,” she declared toi thunderous cheers from the assembled delegates. “The American people know that the system is rigged against them and they want us to level the playing field. That’s our mandate. That’s what we’re here to do.”

“However tough the challenge, however steep our climb, I am proud to stand with you, to march with you, and to fight side-by-side with you,” Warren continued, as delegates began rising to their feet and joining her in shouting: “Our agenda is America’s agenda and if we fight for it, we win.”

It was a rare political moment, one that had AFL-CIO President Richard Trumka musing aloud: “if we could only clone her.”

It wasn’t just the energy of Warren’s speech, not just the unapologetic stance and the clenched fist in the air.

While too many Democrats come across as mere spectators to the great political and economic battles of what Mitch McConnell and Paul Ryan would make an age of austerity, Warren chose the opening night of the labor federation’s convention that she is prepared not just to fight but to lead.

She did so not from a place of caution, or compromise, but from a place populist determination. She decried “a Supreme Court that functions as a wholly owned subsidiary of Big Business.” She ripped Republican governors, objecting to the fact that “in Wisconsin Scott Walker and the legislature he controls have declared war on working families by ripping the guts out of collective bargaining agreements.“

But the real muscle of Warren’s speech, the element that had The Washington Post saying it “reinforced the potential Warren has for higher office,” was a refusal to bend to the lie of austerity and the conventional wisdom that says there is no alternative to cuts and compromises with the corporate agenda.

“On almost every issue of economic concern, our values are America’s values, and our agenda is America’s agenda,” Warren told the crowd, reminding convention delegates that the cause of economic justice is not a minority mission:

§ “We believe that Wall Street needs stronger rules and tougher enforcement—and you know what? So do more than 80 percent of people. Wall Street will fight us, but the American people are on our side.”

§ “We believe in raising the minimum wage—and so do 71 percent of people. The Republicans will fight us, but the American people are on our side.”

§ “We believe in preventing cuts to Social Security benefits—and so do 87 percent of Americans. The Washington insiders will fight us, but the American people are on our side.”

§ “We believe in rebuilding our infrastructure and in passing legislation to create jobs—and so do 75 percent of Americans. The Tea Party will fight us, but the American people are on our side.”

§ “We believe that the sequester is stupid. And, you know what? A majority of Americans-including a majority of Republicans agree with us too.”

Too many Democratic leaders have been too slow to declare, as Warren did in Los Angeles, “We have a mandate—a mandate to build a fair tax code, one that isn’t rigged to give breaks to big oil and billionaires while it crushes working families. We have a mandate to invest in the future—in infrastructure, in research and innovation, and in education. And we have a mandate to create jobs—jobs right here in America, jobs for hard working people!”

That’s the language that gets economic justice advocates—who have fought long enough in the trenches to know what is needed—excited. Massachusetts Nurses Association president Donna Kelly-Williams was not alone around the time of the AFL-CIO convention when she said of Warren, “I would love to see her run in 2016.”

The battlelines for 2016 have yet to be drawn. The race is not over; in many senses it is not even begun. And the voice of Elizabeth Warren, as a presidential candidate, as a prospective presidential candidate, as a vice-presidential prospect, as a non-candidate seeking to influence the direction of her party and the greater campaign, is a vital one. Indeed, she is providing the language that populists, progressives and, hopefully, Democrats will employ—no matter who is running in 2016—to take on and finally defeat the false premise of austerity.