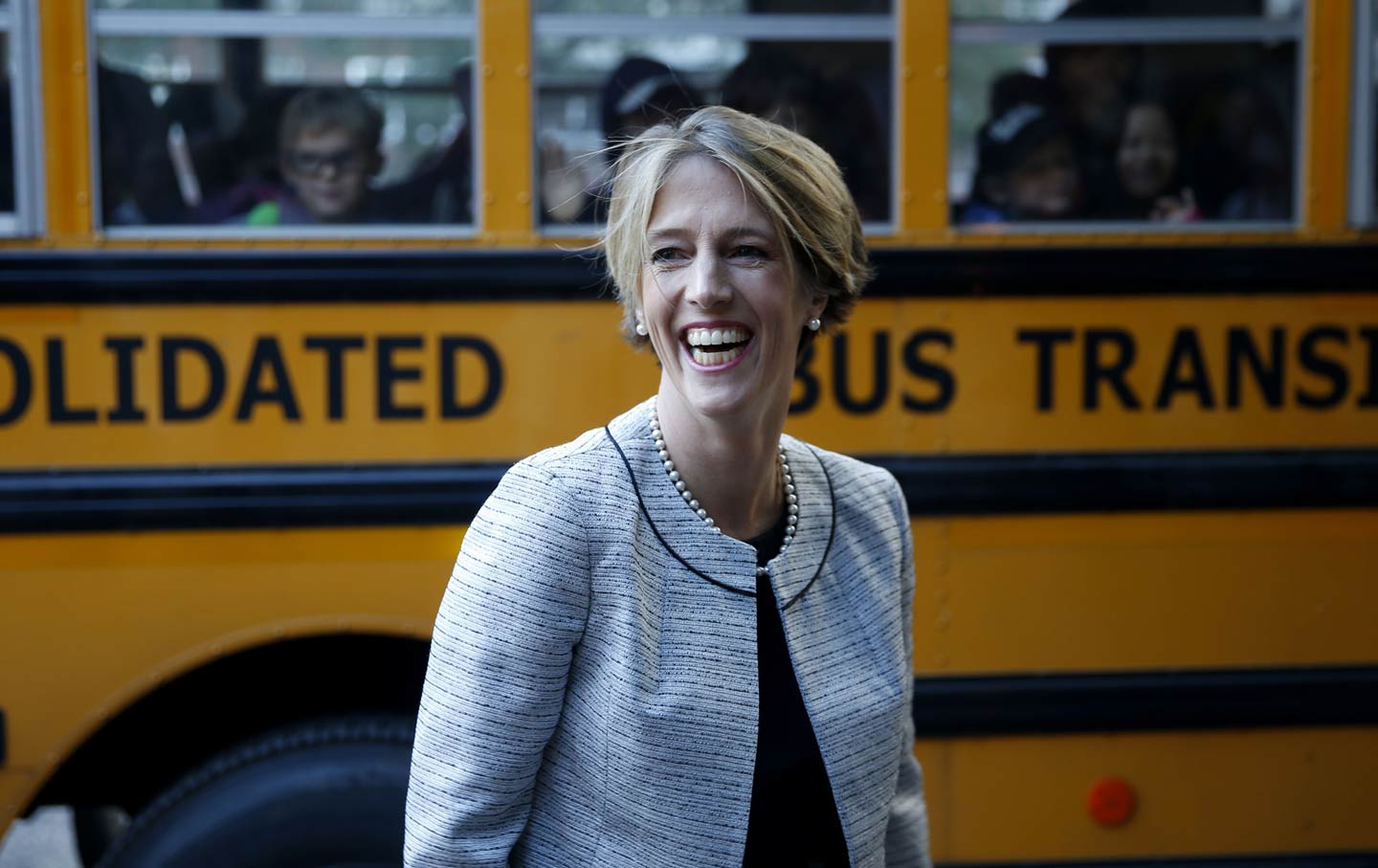 Bernie Sanders always said it would take more than just electing a president to bring about a political revolution. By the time you read this, Lucy Flores, running in Nevada’s 4th Congressional District and endorsed by Sanders, will know whether she’s won the Democratic nomination (the primary is today). On August 2 Pramila Jayapal, another Bernie-crat running in Washington’s 7th district, will face eight opponents in that state’s nonpartisan primary. But of all the Bernie-crats campaigning this year, probably the most closely watched is New York’s Zephyr Teachout, who on June 28 is running in the Democratic primary to take the 19th Congressional District back from the Republicans.

Teachout is the Fordham law professor who mounted what was supposed to be a quixotic challenge against Andrew Cuomo in the 2014 New York Democratic primary for governor. A crusader against corporate corruption and the influence of money in politics, and a supporter of Occupy Wall Street, Teachout, who had never run for office before—and had a total campaign budget of less than a million dollars—ended up winning 34 percent of the vote.

Teachout ran particularly well in the Hudson Valley, and when Republican congressman Chris Gibson said he wouldn’t seek reelection—reportedly to prepare for a gubernatorial challenge in 2018—Teachout, who had been living in Dover Plains, declared her candidacy. That was in January, and for the past six months Teachout has been clocking up the miles in a sprawling district that straddles the river from Hoosick Falls, just west of Bennington, down to Poughkeepsie, stretching west through the whole of the Catskills to Oneonta and beyond. I spent a day there with her recently, driving and talking politics.

It’s a mostly rural district, and our conversation often circled back to the way the concentration of Big Agriculture into a handful of monopoly processors—Tyson Foods or Pilgrim for chicken, Dean for milk—has allowed them to dictate not just prices but also the terms and conditions under which producers operate. Teachout calls this abuse of corporate power “chickenization.”

For Teachout, who describes herself as “a Brandeisian”—a devotee of the late Supreme Court Justice Louis Brandeis, known for his opposition to corporate power and his robust defense of free speech—the current wave of concentration in areas like banking and cable television represent a 21st-century reprise of the trusts that were such a blight on early-20th-century American life. “Our modern monopolists may be more attractive,” she says, citing Jeff Bezos, who founded Amazon and also now owns The Washington Post. But their business practices, she adds, still “lead to fear” on the part of suppliers and competitors, “and to political fear” by potential critics and politicians who are supposed to act as regulators.

To voters, though, Teachout’s warnings about “a hidden revolution in our marketplace that is corrupting our politics” can sound pretty abstract—especially in a district where the biggest cities are Kingston and Saugerties, and where local issues like water quality, school funding, and the lack of fast broadband loom larger than anything that happens in Washington. So when Lou Saperstein, whose family store has dominated Main Street in Millerton for a half century, told her about the trouble he was having with Oshkosh, Teachout knew she’d found a way of bringing her issues to life. Because it turns out Saperstein doesn’t need to watch Teachout’s TED Talk to know what she means by “chickenization.”

“I’ve been doing business with Oshkosh for 20, 25 years,” Saperstein told me. “I used to go down to their offices in the Empire State Building to make my orders. Then they started sending me sheets in the mail. Then they sent a disk in the mail. After they got bought by Carters in 2012 I got a letter saying they were canceling my order.”

“Businesses are being forced out because they can’t compete.” —Teachout

“Businesses are being forced out because they can’t compete,” said Teachout. “People don’t necessarily know the terms ‘anti-trust’ or ‘monopoly.’ But they know something is wrong.”

On first glance—or on paper—Teachout may not seem that different from Sean Eldridge, an activist for gay rights who founded Hudson River Ventures to provide capital for small businesses in the Hudson Valley. Eldridge, who is married to Facebook co-founder Chris Hughes, challenged Gibson in in 2014—and lost by 28 points.

But Teachout was raised in rural Vermont—“I grew up killing chickens,” she told the audience at her TED Talk—and unlike Eldridge, who bought a $2 million home in the district, lived until recently in a rented apartment (she’s just bought a place in Clinton). When she gets really angry, she says “frickin’.” And after years of commuting between New York and Washington, her pleasure at being back in the countryside seems obvious—and unfeigned. When we stop by the Johnsonville Volunteer Fire Department Barbecue, she inspects every vehicle with Chief Glen Brundige, and then listens intently as he tells her how much of the damage inflicted nearly five years ago by Hurricane Irene has yet to be repaired. That morning, at the Democratic Rural Conference in Albany, grizzled party hacks and fresh young volunteers alike seem eager to meet the party’s rising star—notwithstanding her challenge to the governor, or her endorsement of Bernie Sanders.

First, though, Teachout has to win the nomination. Her opponent, Will Yandik, who describes himself as a “fourth-generation farmer” from Livingston, shouldn’t pose much of a problem. Despite a recent puff piece in The Wall Street Journal calling him a “populist,” Yandik, who invariably mentions his Princeton and Brown degrees in his speeches, seems more of an amiable amateur. His Twitter account currently boasts 196 followers; Teachout has 36,900. Yandik has been endorsed by the mayor of Hudson—the town where he went to high school. Teachout has been endorsed by Senators Kirsten Gillibrand and Chuck Schumer—and by Bernie Sanders, who sent out a fundraising letter for her in April.

One sign that Teachout is already looking ahead to November is her occasional description of herself as a “Rockefeller Republican” or a “Teddy Roosevelt Republican”—though to me she referenced a different Roosevelt, describing herself as “a second-term FDR person.” That would be the term that began with a landslide victory for FDR, saw the Democratic Party transformed into the party of immigrants, city dwellers, and African Americans—and also saw the president’s plan to reorganize the Supreme Court thwarted by, among others, Louis Brandeis.

But Teachout’s refusal to be pigeonholed is more than just contrarianism—or electoral calculation. It’s also an indication of a candidate determined to keep learning, and thinking. Though she campaigned in the area in 2014, Teachout says that this time around she’s been surprised by “the devastation of the heroin crisis and the strength of people to overcome it. I’ve sat with so many people who’ve been affected, either directly, or through a family member, and it’s an epidemic. People are suffering with the disease and with the stigma, but also coming together to get help, speak out, and support each other.”

“The threat people feel in their lives from the federal government is real. And we have to honor that.” —Teachout

A determined foe of corporate power who can be scathing about the failure of markets—and who literally wrote the book on corruption in America—Teachout is equally skeptical about the ability of big government to deliver the good life. “The political disempowerment that people felt [that led to the founding of the Tea Party] is real,” she said. “The threat people feel in their lives from the federal government is real. And we have to honor that.”

So while it is already possible to identify Teachout’s issues—political corruption, the abuse of corporate power, fracking and the environment, human rights, protection for small businesses and family farms—it is still too early to say what kind of politician she will be. Or how far she can go.

But her opponents might want to bear in mind her record as a cross-country runner, beginning at the age of 13, when she won the New England Championship. “You’re not supposed to run out front. But nobody told me that,” she says. Jim Eakin, her high-school coach, said Teachout raced in the bitter New England winter without long sleeves or tights. “She had a lot of natural talent,” said Eakin, “but her greatest strength was her toughness.”

Editor’s note: This article was updated to reflect the fact that Teachout just bought a home in Clinton, New York.