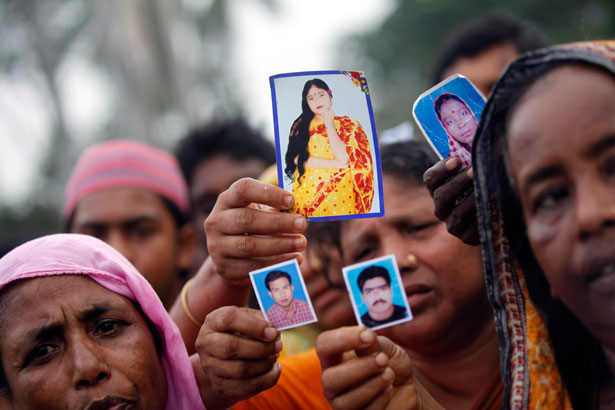 Relatives show pictures of missing garment workers during a protest in Savar on April 29, 2013. (Reuters/Andrew Biraj)

Last April, the Rana Plaza factory compound in Bangladesh collapsed, leaving more than 1,100 workers dead amid a massive pile of rubble. The victims and their families are still waiting for any kind of compensation, and garment workers around the world face an even longer, more uncertain wait for economic justice.

The approaching anniversary of one of the global garment industry's worst disasters coincides roughly with another somber milestone: the Triangle Shirtwaist fire, the ferocious factory blaze that cast scores of charred bodies onto the streets of Manhattan in 1911. The two disasters have a grim resonance: both were the result of anemic regulatory systems and labor oppression—particularly the degradation of young women garment workers. Both spurred political momentum for major labor reforms. But the lapse of a century between the two events reveals how injustice persists in the industry, though production has migrated to the other side of the world.

Still, Rana Plaza helped shift the political ground in the Global South’s garment sector. Multinationals that had for years ignored systemic safety and labor problems in the sector have begun trying to clean up their supply chains. Since last spring, fashion-industry multinationals from Europe, Asia and North America, have signed a major new health and safety program known as the Bangladesh Accord.

The agreement, a collaboration of about 150 brands and retailers (including Adidas, Benetton, H&M and Abercrombie & Fitch), and advocacy groups like the International Labor Rights Forum and Clean Clothes Campaign, with the support of unions and the International Labour Organization, is not a comprehensive regulatory system. But it establishes a legally binding framework for independent safety monitoring, and crucially, funding for safety remediations. The plan would cover potentially more than 1,500 Bangladesh factories for five years, financed by the signatories.

The Accord departs significantly from conventional, voluntary “corporate social responsibility” schemes, which usually feature glossy public-relations campaigns and rubber-stamp inspections (factories rife with child labor, fire hazards and other violations have routinely passed corporate-commissioned safety audits). The Accord’s mandates follow the brand through the production chain. So a UK-based corporation, for example, would be liable for violations in its contracted suppliers in Dhaka. In the past, companies like Gap and Walmart have been able to deflect responsibility following factory accidents by blaming the downstream supplier for violating labor codes, supposedly without the firm’s authorization. Or a company might drop its contract with a supplier that has been linked to a violation. Labor advocates say such measures reinforce corporate impunity and do little to improve industry conditions overall, particularly because the sudden withdrawal of a firm’s business could ultimately leave workers worse off.

The Accord has just begun rolling out initial safety inspections, and the fallout of years of systematic regulatory neglect is surfacing. Recent surveys of factory buildings revealed that a large portion of the production facilities were structurally unsound. Since late 1990, at least 2,200 garment workers have perished in at least 300 safety incidents, according to the International Labor Rights Forum.

There are also subtler safety problems that must be addressed inside the workplace—blocked fire exits, faulty alarms and—even more dangerous—workers getting deterred from complaining about unsafe conditions for fear of retaliation from bosses. To deal with the oppressive workplace climate, the Accord places workers and unions in a key oversight role, to help enforce the measures on a day-to-day basis. And if their facilities are shuttered for non-compliance, workers are guaranteed some measure of job security . The Accord's labor protections parallel broader political initiatives, led by the ILO and the Bangladesh government, to reform domestic labor laws and regulations.

Alongside the Accord, activists groups have collaborated with corporations to launch a victim compensation fund, with a goal of raising $40 million for financial and medical support for an estimated 3,600 workers and families. (Update: as of mid-March, fewer than half the brands involved had publicly contributed directly to the fund, and activists are campaigning to force the rest to pay; more donations may be forthcoming.) That award doesn’t come close to resolving the massive economic inequities that are endemic to the low-wage garment sector in South Asia. But a system for providing material support to survivors does at least set a precedent for forcing the industry to take some responsibility for the violent exploitation driving its bottom line.

Yet neither the Accord nor the compensation fund alone can reshape the “fast fashion” industry, which bases its profit structure on relentless price competition and unbridled consumerism. Lax oversight is the inevitable byproduct of a manufacturing system that aims to make labor as cheap as possible. Moreover, several major players in fashion retail, including Walmart and Gap, have rejected the Accord and launched a weaker alternative program that lacks the Accord's legally binding mandate.

At the end of the day, whatever rules the industry enacts, workers will remain inherently vulnerable, unless they have a say in how their workplaces are run. To make the whole industry structurally sound, workers need the ability to engage in collective bargaining with employers and to organize independent unions. Building collapses pose a threat, but a more complex hazard is the economic violence they face on the factory floor, which demands a collective response. And just as the Triangle factory fire energized the activism of the American labor movement, Rana Plaza has inspired a rash of protests and strikes over the past year—with workers demanding not just basic safety, but higher wages and dignified working conditions.

Kalpona Akter, a former garment worker who now leads the Bangladesh Center for Worker Solidarity, testified recently to the Senate Foreign Relations Committee that, although the industry must deal with its safety hazards,

There’s another core part of the problem that must be solved. It’s this: time and again when workers speak up with concern about safety risks, they aren’t listened to. And in the moment of crisis, when the fire alarm goes off or a building starts to crack, workers’ voices not only fall on deaf ears, but they are actively disregarded. Their right to refuse dangerous work is denied.

While the horrors of Rana Plaza have exposed the extraordinary brutality embedded in the modern fashion industry, the systemic labor crisis is still roiling below the surface. Protecting workers from injury is one thing; empowering them to resist oppression is quite another.

Learn more about the campaign for compensation for Rana Plaza victims and the April 24 Global Day of Action.