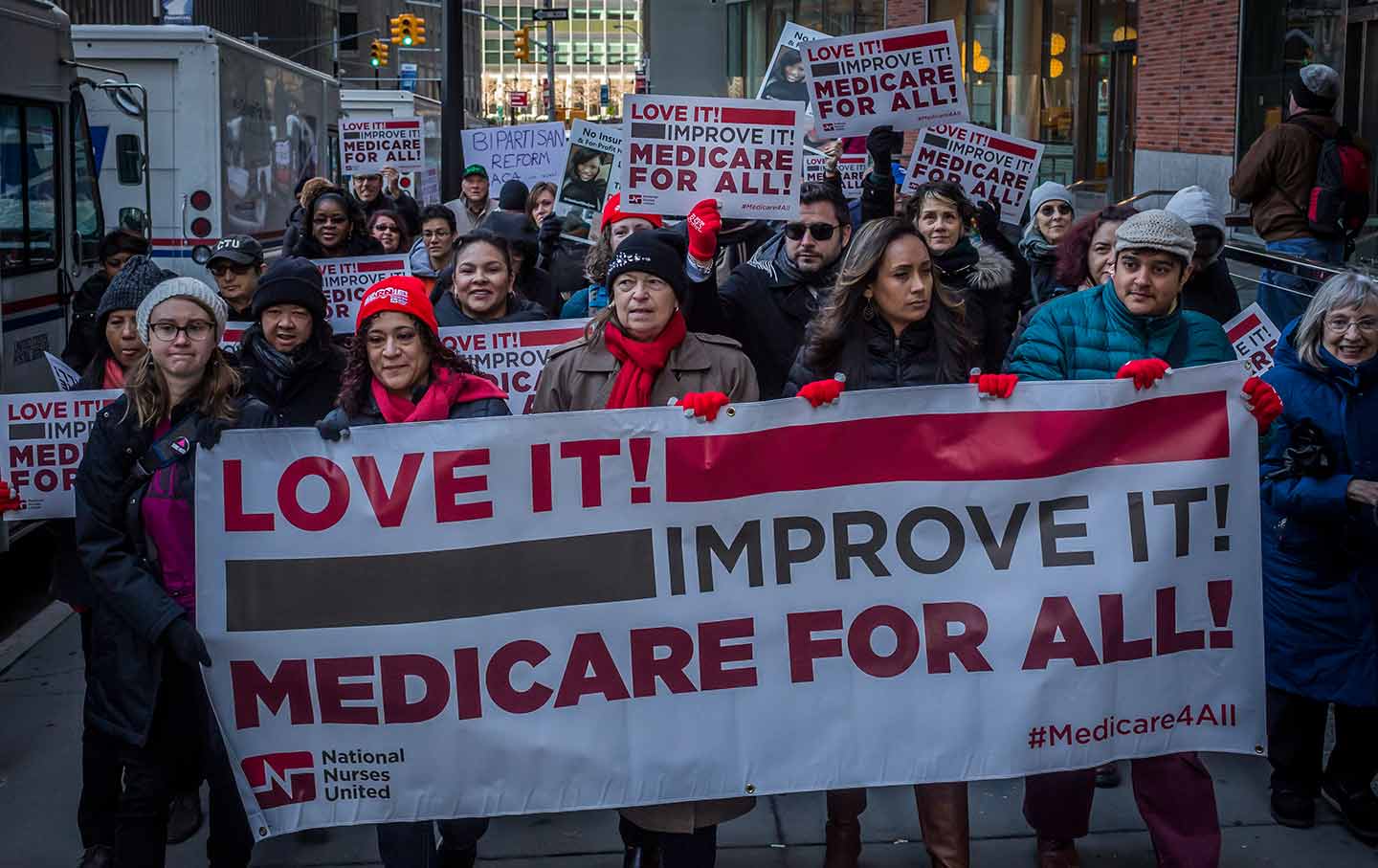 Members and supporters of National Nurses United rally for a single-payer national health insurance program in the US. (Sipa USA via AP)

Joshua Holland’s anti–single payer screed (“Medicare for All Isn’t the Solution for Universal Health Care”) is so riddled with misinformation and outright errors that it makes one wonder whether The Nation has laid off its fact-checkers.

Just one example: In arguing the impossibility of a health-care transformation in a high-spending nation, Holland claims that Switzerland’s health expenditures in 1996 amounted to only 5 percent of GDP. The correct figure is 9.2 percent. [Editor’s Note: This has been corrected in Holland’s article.]

He suggests that cost control under single payer requires halving doctors’ incomes, a serious political problem if it were true. But Canadian doctors make about 80 percent what their US counterparts do, and, taking into account their lower educational debt and post-retirement health expenses (more than $250,000 per couple in the United States), they’re about as well off financially as their US counterparts. Moreover, most US single-payer projections foresee increased spending on physician visits once copayments are abolished, and simplified billing would reduce the bite that office overhead takes out of doctors’ take-home pay.

Holland falsely claims that no one has provided guidance on the transition to single payer. We, and our colleagues in Physicians for a National Program have published in the Journal of the American Medical Association, The American Journal of Public Health, and the New England Journal of Medicine several quite detailed proposals laying out transition plans for acute-care financing, long-term care, and quality monitoring; another, on prescription-drug regulation and financing, is in the works. We’ve analyzed in detail the likely shifts in administrative costs and employment, and the federal single-payer legislative proposals include funding for job retraining and placement and income support to transition the million or so insurance and administrative workers who currently do useless bureaucratic work and whose jobs would be eliminated under single payer. While the transition would be disruptive for some administrative workers, it would be simple for hospitals (they’d stop billing for each patient, Band-Aid, and aspirin tablet and instead be paid lump-sum budgets), and a welcome relief for doctors and nurses, who suffer record high burnout rates in the current medical-industrial complex. That’s why recent polls show that around half of doctors favor single payer (and 21,000 of them have joined Physicians for a National Health Program), and National Nurses United, the leading nurses’ union, is the nation’s strongest single-payer proponent.

Most egregiously, Holland misrepresents the single-payer legislation that’s actually been proposed, citing Medicare’s deficiencies to smear reform proposals. As the title of John Conyers’s bill HR676, the Expanded & Improved Medicare for All Act, makes clear, that legislation would upgrade Medicare coverage, eliminating copayments and deductibles, and fix its other flaws. Holland suggests that, since many Medicare recipients supplement their coverage with private policies, such legislation would boost out-of-pocket costs for millions who currently have employer-paid coverage or Medigap policies. In fact, virtually no one would face increased copayments or deductibles under HR 676 (or Bernie Sanders’s forthcoming legislation, or the many state bills), although wealthy Americans’ taxes would rise. And few people would complain about being freed from insurers’ narrow provider networks; not one of the Medicare Advantage plans, without out-of-pocket benefits, covers care at New York’s Memorial Sloan Kettering Cancer Center. Under single payer patients could, as in Canada, choose any hospital or doctor.

Holland’s scare-mongering about the chaos likely to ensue during a transition to single payer echoes The Wall Street Journal’s dire predictions of “patient pileups” and other disasters at the dawn of Medicare in 1965. It didn’t happen then and wouldn’t happen now. Medicare, sans computers, enrolled 18.9 million seniors (displacing private insurance for many of them) within 11 months of its passage.

The real enemies of single payer aren’t the disgruntled patients or doctors whom Holland features but the insurance and pharmaceutical firms that he barely mentions. That powerful opposition is the real problem we have to overcome, not the imagined chaos of the transition or the phony fear that patients would revolt against better coverage.

The authors are primary-care physicians, distinguished professors of public health at the City University of New York at Hunter College, and lecturers in Medicine at Harvard. They founded Physicians for a National Health Program and served as health-policy advisers during Bernie Sanders’s presidential campaign.

To the editors:
Liberals have created a new single-payer bogeyman to justify their renewed pursuit of failed incremental policies for health reform, as in Joshua Holland’s recent article. It used to be that single payer was not “politically feasible.” Now, according to the likes of Holland, Harold Pollack, and Dean Baker, the problem is that single-payer advocates haven’t worked out a plan to “implement” single payer, or the “brass tacks.”

In fact, implementation is the easy part of health reform. The Canada Health Act is less than 14 pages long, and is only that long because it is also printed in French. Taiwan, which had 40 percent of its population uninsured, installed a universal single-payer system ahead of schedule in less than a year in 1995. The ease of adoption of the American Medicare program also bodes well for single payer, as Holland admits. Indeed, nearly every implementation issue Holland raises is already addressed in the Physicians Proposal for Single Payer National Health Insurance (2015) and Representative John Conyers’s bill, HR 676, the “gold standard” for single-payer legislation.

The “single payer” envisioned in these proposals is not today’s Medicare, of course, but an improved version of Medicare, with more comprehensive benefits, and greater ability to control costs. HR 676 may not specify an exact financing plan, but gives specific enough parameters so that whatever financing plan is adopted (one possible plan is here) it will shift the burden from the sick and poor to the healthy and wealthy, and make care free at the point of delivery. Private employers only pay a paltry 20 percent of the current health care tab, which can be recouped with a small payroll tax or tax on corporate revenues (as recently proposed by Robert Pollin for California). According to a study by David Himmelstein and Steffie Woolhandler in the American Journal of Public Health, taxes already fund over 64 percent of health care in the United States, so moving to a publicly-funded plan is a shift, not a radical change.

Holland assets that physicians will have to be paid less under single payer, which is false. There are many advantages to a single-payer system, not least of which is the saving of $500 billion annually currently wasted on insurance overhead and excess provider bureaucracy—more than enough money to cover the extra costs of clinical care for the uninsured and underinsured, and to eliminate copays and deductibles for everyone, without cutting physician pay. Having said that, the single payer system will have the ability to shift more funding towards primary care over time, which would help with both access and costs down the road.

Bizarrely, Holland tries to revive Jacob Hacker’s discredited proposal for a “public option” that would compete with private insurers. The premise for Hacker’s proposal is that Americans are “stubbornly attached,” in Hacker’s words, to employer-based insurance and don’t want to give it up, refuted by Kip Sullivan in this blog post. But polls show that over two-thirds of Americans favor Medicare for All. Adding one more insurance company to our fragmented and failing health system will not cover everyone or control costs.

Proposals for incremental reform to “fix” rather than “repeal” the ACA are now on the congressional agenda, but much more fundamental reform is needed. If Congress passed single payer today, we could implement it within a year and save tens of thousands of lives. Time to get to work.

Ida Hellander, MD, is a former executive director and director of national health policy (1992–2017) at Physicians for a National Health Program.

Himmelstein and Woolhandler aren’t alone in accusing me of dishonestly failing to note that Representative John Conyers’s Medicare-for-All bill would “fix” the current program’s “flaws,” including the fact that Medicare is not currently structured as a single-payer program. But I wrote quite clearly that, “if we were to turn Medicare into a single-payer program, as some advocates envision, then we’d also be asking a third of all seniors to give up the heavily subsidized Medicare Advantage plans that they chose to purchase. Consider the political ramifications of that move alone.”

Like other critics, Ida Hellander simply wishes away what I see as the central issue of loss aversion, citing a 2009 blog post by Kip Sullivan which asserts that “two-thirds of Americans support Medicare-for-all.” Sullivan cites a number of conflicting polls conducted in the early 2000s. We have more recent indications of how the American public feels about government involvement in health-care provision now, seven years after the Affordable Care Act was enacted: Pew’s oft-cited poll from June of this year found that, while a record high 60 percent of respondents say that it’s the government’s responsibility to cover everyone, only 33 percent said that should be accomplished through a “single national government program,” and the remainder offered that it should be done through a mix of public and private programs or were unsure.

Loss aversion is a very well documented phenomenon, and it is entirely irrational. In one famous study, one set of participants were given $50 and offered a choice between keeping $30 or taking a 50/50 all-or-nothing bet. Another group were offered the same terms, but this time the choice was phrased as losing $20 or taking the bet. Just changing the wording from “keeping $30” to “losing $20” resulted in a significant increase in those willing to roll the dice—such is our distaste for losing something we have.

Status-quo bias is another very real, and not entirely rational phenomenon—people tend to wary of change, especially sudden or radical change. And of course, the next debate over health-care reform won’t be conducted honestly, as we’ve seen from the opposition to the Affordable Care Act. It’s telling in that arguing that “implementation is the easy part of health reform,” Dr. Hellander cites the experience of Taiwan, which in 1994 was a country of 21 million that was still transitioning from a military dictatorship and spent 5 percent of its GDP on health care.

Unfortunately, these writers and other critics confirm my worry that a single, extremely difficult route to universal coverage is fast becoming a litmus test for progressives. All have attempted to excommunicate me from the left, framing my piece as part of an attack, perhaps a concerted one, on single payer by “liberal” opponents. The reality is that I have long been, and will continue to be, an advocate of establishing a universal health-care system that might be called “single payer.” But I continue to think that rapidly moving much of the population into a single program—without first either creating a model at the state level or delivering some tangible benefits through more modest Medicare expansions—is a recipe for failure.