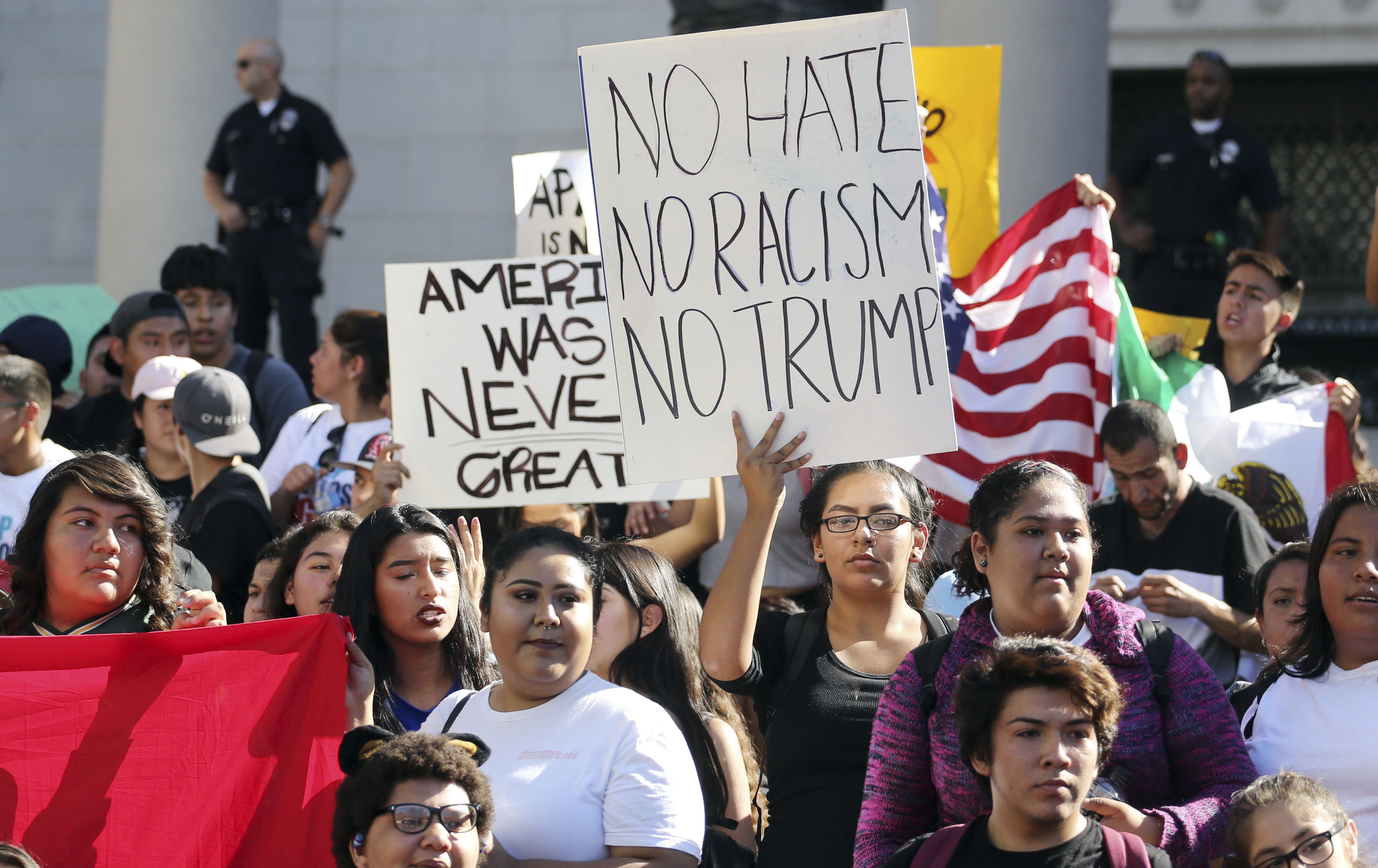 In 2002, shortly before the most recent period of unified Republican control of our government began, John Judis and Ruy Teixeira published The Emerging Democratic Majority. In it, they argued that as bleak as things looked for liberal America at the time – the book came out as another Republican president who lost the popular vote was pushing to start a second front in a nebulous “war on terror” – the country was becoming more diverse, and ultimately a new governing coalition of people of color, single women, working-class whites and highly-educated professionals would put the Democratic Party back in power in Washington.1

In 2008, their theory looked prescient. Barack Obama won by a big margin with a coalition that was very much as Judis and Teixeira had described it in their book.2

But then came Donald Trump. As we enter another period of consolidated Republican control of Washington – and most state houses –can we still look to the electorate’s changing demographics to bring about a less polarized, and more progressive future? Has the “rising American electorate” merely been delayed by a “black swan” election? Or has Trump’s victory – and three of the past four midterm wins for the GOP — signaled that white backlash politics, voter suppression and Democrats’ tendency to sit-out midterms has given the conservative movement a roadmap for maintaining power despite the fact that their base is declining in numbers?3

Back in 2002, Judis and Teixeira were careful not to overstate their case. They never argued that “demographics are destiny,” or that politics no longer mattered and we could all sit back and wait for the Fox News set to die off. The book was as much a blueprint for how the left and center-left could come together around a common set of policy goals and win as it was a treatise on demographic change.4

“Nothing will happen simply on the basis of shifts in the underlying electorate.” —Ruy Teixeira

But others, like James Carville and Rebecca Buckwalter-Poza in their 2009 book, 40 More Years: How the Democrats Will Rule the Next Generation, argued more explicitly that gathering demographic headwinds would eventually force Republicans to abandon their hard-core antipathy toward government or risk becoming a rump Southern regional party permanently in the minority. And other analysts, like veteran Democratic pollster Stan Greenberg, Emory University political scientist Alan Abramowitz and Robert Jones at the Public Religion Research Institute, pointed out that the GOP was further vulnerable as the number of white Christians declined and the share of voters who are unaffiliated with a church increased.5

After the Democrats’ “shellacking” in the 2014 midterms, the two authors parted ways over the meaning of the party’s resounding defeat. Judis now believes that the two parties have achieved “an unstable equilibrium, with the Republicans holding a slight advantage.”6

“The Democrats have to figure out how to be the party of average people, and not one that just represents the poorest Americans and the affluent,” he says, noting that he sees a growing backlash among not only working-class whites but also what might be called college-educated office-workers against the diverse coalition that the Democrats assembled. In his view, as the Dems became more explicit in their embrace of women, immigrants, LGBT-Americans and people of color, a share of white Democrats began to feel like the party no longer represented their interests.7

“In 2001, we saw the development of a coalition in the Democratic Party that could become a majority. That included around 50 percent of the white working class outside of the Southern states, which had been a core Democratic constituency since the time of the New Deal. We never anticipated getting 25-30 percent of these voters,” as Democrats did in 2016.8

“You’re still going to have politics, and can’t base your majority on census estimates,” says Judis. The two major parties are amorphous coalitions that have historically seen voting blocs move in and out of the fold. Sixty years ago, white Southerners were a core Democratic constituency, but the party’s support of the civil rights movement changed that. Judis is clearly right that there are no assurances that the groups that make up the emerging democratic majority will continue to skew toward the Democratic Party in the future.9

Others, like Michael Lind, argue that this uncertainty about various demographics’ partisan loyalties over the long term is especially true among Latinos and Asian-Americans, diverse groups that can’t necessarily be counted on to become core Democratic constituencies like African-Americans or Jews. Immigrant groups tend to assimilate in ways that are consistent with the regional culture where they settle, and their numbers are growing in the South and the West. Will, say, fourth-generation Mexican-Americans makes Texas blue, or will they come to lean red themselves? And as the more upwardly-mobile segments of these demographics become part of the cultural mainstream, will they be up for grabs by a GOP offering them tax cuts and tort reform? These are unanswerable questions.10

Teixeira agrees with his former co-author that demographic changes alone won’t deliver results, but remains confident that those shifts give the progressive movement a big opportunity. “It’s not a matter of coming to a certain point where Democrats just win all the elections,” he says. “It’s about which strand of political thinking and policy orientation will ultimately wind up having hegemony in America. And over the long run, I still think that our politics will look more like those of the emerging Democratic majority than the politics of the contemporary Republican Party. If you do a very simple estimation of the changes that we’re likely to see in terms of the structure of the electorate going forward, if we held everything else constant – even the super-high level of support for Republicans among the white working-class – then even in four years, the GOP would lose back those three Midwestern states, as well as North Carolina and Florida.” For Teixeira, Republicans are “living on demographic borrowed time, in that the very voters who gave them such high levels of support in this election will likely decline by another two-three percentage points as a share of the electorate” by 2020.11

He notes that Judis’ belief that white “office workers” are slipping away from the coalition wasn’t evident in this election. While Hillary Clinton struggled with white working-class voters, she performed slightly better among college-educated whites than Barack Obama did in 2012.12

Teixeira also points to the modern Republican party’s inability to offer policies that might improve the lives of working people. In his view, the Democrats have to deliver to fulfill the promise of this emerging majority. “We argued in the book that nothing is automatic,” he says. “Nothing will happen simply on the basis of shifts in the underlying electorate. Those shifts create the possibility of creating a successful coalition, but you still need to organize that coalition, and you need to perform – you have to have a policy approach that people find credible, and that actually works.”13

That cuts both ways: whether or not this emerging electorate lives up to its potential for the Democrats also depends on the Republican Party’s ability to adapt to these shifts. After the 2012 election, party officials conducted an “autopsy report” which concluded that in order to remain competitive, the party would have to become more tolerant toward the LGBT community and people of color and pass comprehensive immigration reform. Rank-and-file voters, on the other hand, chose a candidate for 2016 who epitomized the most insular instincts of the conservative movement. That probably bodes well for the EDM thesis.14

Over the long term, Judis and other skeptics of the EDM thesis are right that it’s impossible to predict what events, political or otherwise, might reshape the major parties’ coalitions and how. But over the medium term, it’s important to note that studies have shown that millennials do hold more progressive views than older voters, and not just because they skew less white than earlier cohorts. A study by UC San Diego political scientist Gary Jacobson found that younger voters are “less polarized ideologically, because younger cohorts in all partisan categories are much less likely to label themselves conservative than earlier cohorts,” and “the same patterns apply to whites and nonwhites alike.” The most pronounced generational differences, according to Jacobson, appear among Republicans. Far fewer young Republicans today identify as conservative than in older generations, and they’re less likely than their older counterparts to consume conservative media, including Fox News. They’re also less sympathetic to the Tea Party movement and more likely than older Republicans to accept the scientific consensus on climate change.15

This younger generation’s tendency to reject hardline conservatism didn’t emerge in a vacuum. It turns out that the landscape when we first come of age politically has a significant influence on our partisan preferences going forward. The oldest millennials, born in 1980, came of age at the tail end of Bill Clinton’s presidency, which is widely perceived as successful, the next group started paying attention during George W. Bush’s deeply unpopular administration, and the youngest became politically aware under Obama, who leaves office as one of the most popular presidents in the modern era.16

But the political preferences that we develop as we come of age politically aren’t set in stone. They’re subject to change with major shocks like wars or deep recessions. So it’s an objective fact that we have this very large generation entering its prime years that leans significantly to the left relative to older voters but there are no guarantees that it will remain that way. At the same time, Teixeira’s right that the results of the 2016 election doesn’t discredit the EDM thesis. After all, it took a perfect storm of factors unique to this election for Trump to gain the White House. And while we’re entering into a period of deep uncertainty about the future, one thing is certain: the electorate continues to become more diverse and less religious.17