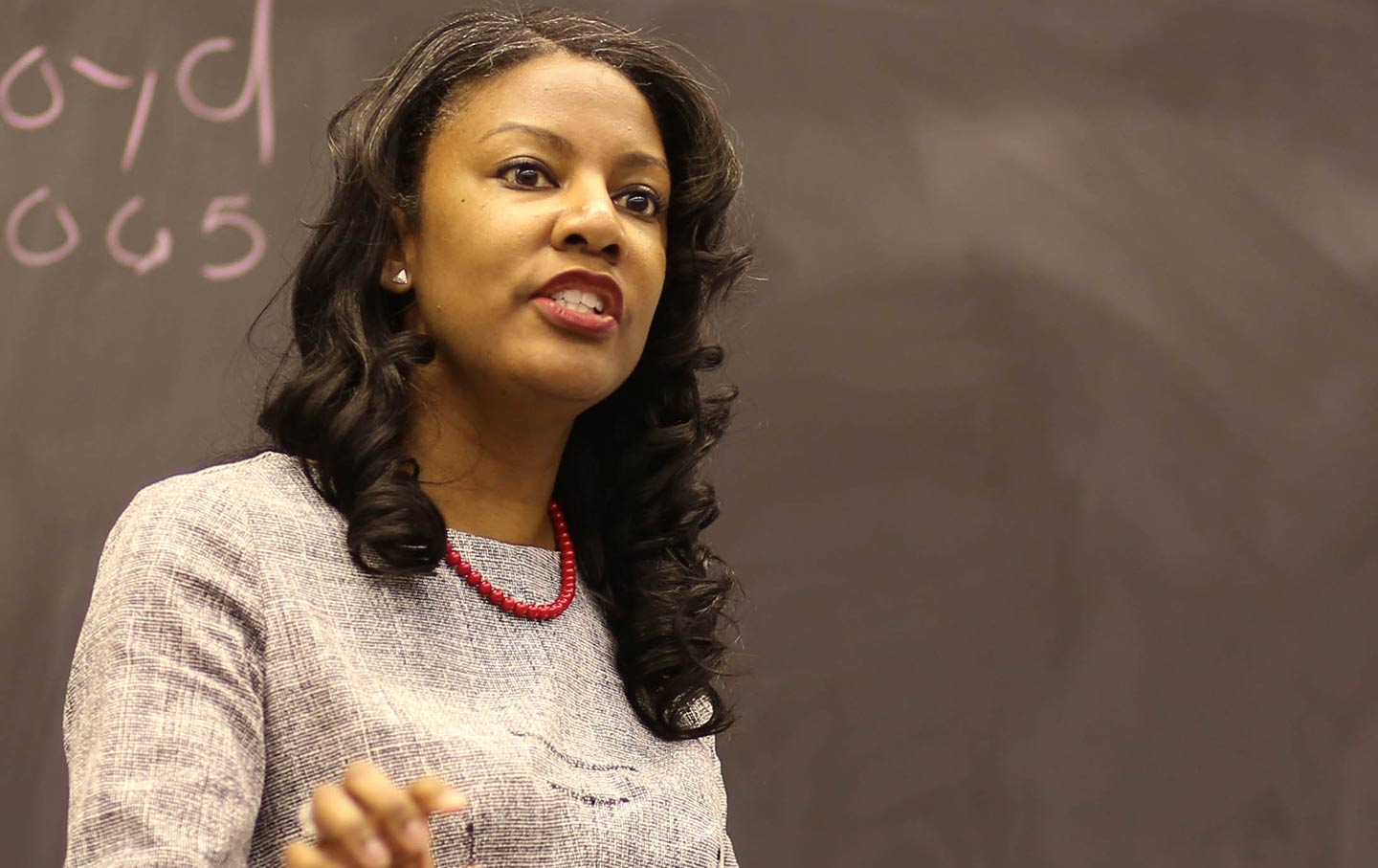 Most political candidates would do just about anything to win the endorsement of their largest hometown newspaper, but Tishaura O. Jones knows that the old rules are rigged—and ripe for revision.

The 44-year-old city treasurer, Black Lives Matter advocate, and labor-backed progressive is running to be the next mayor of St. Louis. Last month, she declined to sit down for a standard candidate interview with the editorial board of the St. Louis Post-Dispatch. Instead, in a stroke of gutsy defiance, she wrote a searing open letter to the newspaper’s leadership in which she criticized its coverage of poverty and racism in the city and laid out her own bold political platform.

“I had a Fannie Lou Hamer moment,” Jones says, referring to the iconic Southern civil-rights activist. “I was sick and tired of being sick and tired.”

“What is killing our city is poverty…,” she wrote. “What is killing our region is a systemic racism that pervades almost every public and private institution, including your newspaper, and makes it nearly impossible for either North St. Louis or the parts of South St. Louis where African Americans live to get better or safer or healthier or better-educated.”

Jones believes she can begin to change all that. And she detailed a plan to do so in her unsparing letter, which quickly went viral and helped infuse her candidacy with a last-minute boost of money and populist energy. As she enters the final days of her primary run, she hopes that energy will be enough to propel “the people’s candidate,” as she calls herself, one crucial step closer to the city’s highest office.

Jones’s campaign, set against the backdrop of the murder of Michael Brown in nearby Ferguson, is further evidence that the movements against mass incarceration, police brutality, and entrenched racism are holding the line at the local level. Should she win, her success would offer reassurance that the progressive flame can still burn hot in City Hall, despite the reactionary white-supremacist agenda ascendant at the White House.

Indeed, most grassroots progressive groups in St. Louis back Jones’s candidacy, says Kennard Williams, a community organizer with the nonprofit Missourians Organizing for Reform and Empowerment, or MORE, which is currently leading a campaign against mass incarceration, called Decarcerate STL, in the city.

Jones’s record, her ideas and her rhetoric, he says, have earned her endorsements from organizations like MORE, the SEIU Missouri State Council, the St. Louis Action Council, and the Coalition of Black Trade Unionists, as well as dozens of Black Lives Matter, civil-rights, and community activists in the city. Mobilize Missouri, a statewide coalition of grassroots activists that emerged out of the Bernie Sanders campaign, endorsed her in mid-February.

“People understand that she is the best option,” Williams adds. “She is the only candidate to come out and trash on our criminal-justice system, to acknowledge there is a problem with this system and that we can’t keep operating it this way.”

In her letter to the Post-Dispatch, for instance, Jones pledged to “look at every issue through a racial equity lens” and to advocate for people who have been “disenfranchised, red-lined and flat-out ignored for way too long.”

One sees this approach in her past work. During her innovative tenure as city treasurer, a normally staid political office, she launched a program to open college savings accounts for every kindergartner in St. Louis and seed each account with $50 drawn from parking fees. She also created an Office of Financial Empowerment, which provides free financial education and credit-counseling services.

As mayor, Jones says she would expand such programs. Her agenda, though, goes far beyond that.

She intends, for instance, to close once and for all the city’s notorious Workhouse, a jail that some activists have likened to a debtors’ prison. In her open letter, Jones described the facility as a “rat hole.” If she succeeds in shuttering it, she says she will funnel the budget savings to reentry programs, mental-health services, and substance-abuse centers.

“Uprooting racism has to be the number-one priority.” —Tishaura Jones

“We have advocated shutting down the Workhouse for a couple years now,” says Williams, who helps spearhead MORE’s campaign against mass incarceration. “Her plan falls perfectly in line with what we are trying to do.”

Jones supports the placement of social workers in the city’s police department, the establishment of a $15 minimum wage, and the creation of a Tenants Bill of Rights to help protect poor and working-class renters from predatory landlords. She plans to eliminate the St. Louis cash-bail system too.

“Cash bail has a domino effect on low income families,” she says. “If someone is in jail because they can’t afford to pay a cash bail, then they may lose their jobs, and from there it becomes a downward spiral.”

If Jones’s campaign prevails, if she beats out six other Democrats in the March 7 primary as well the inevitable Republican opponent in the April 4 general election, the Black Lives Matter movement will clearly, finally, have an unequivocal ally at City Hall.

“St. Louis is the epicenter of Black Lives Matter,” says Jones. “As I wrote in my letter, after that tragic incident in Ferguson, we woke up, black people woke up, and we have seen more civic and political activity from young people than we have ever seen before. I want to make sure that we are amplifying their voices. I want to make sure we are giving them a seat at the table.”

“Uprooting racism,” she contends, “has to be the number-one priority.”