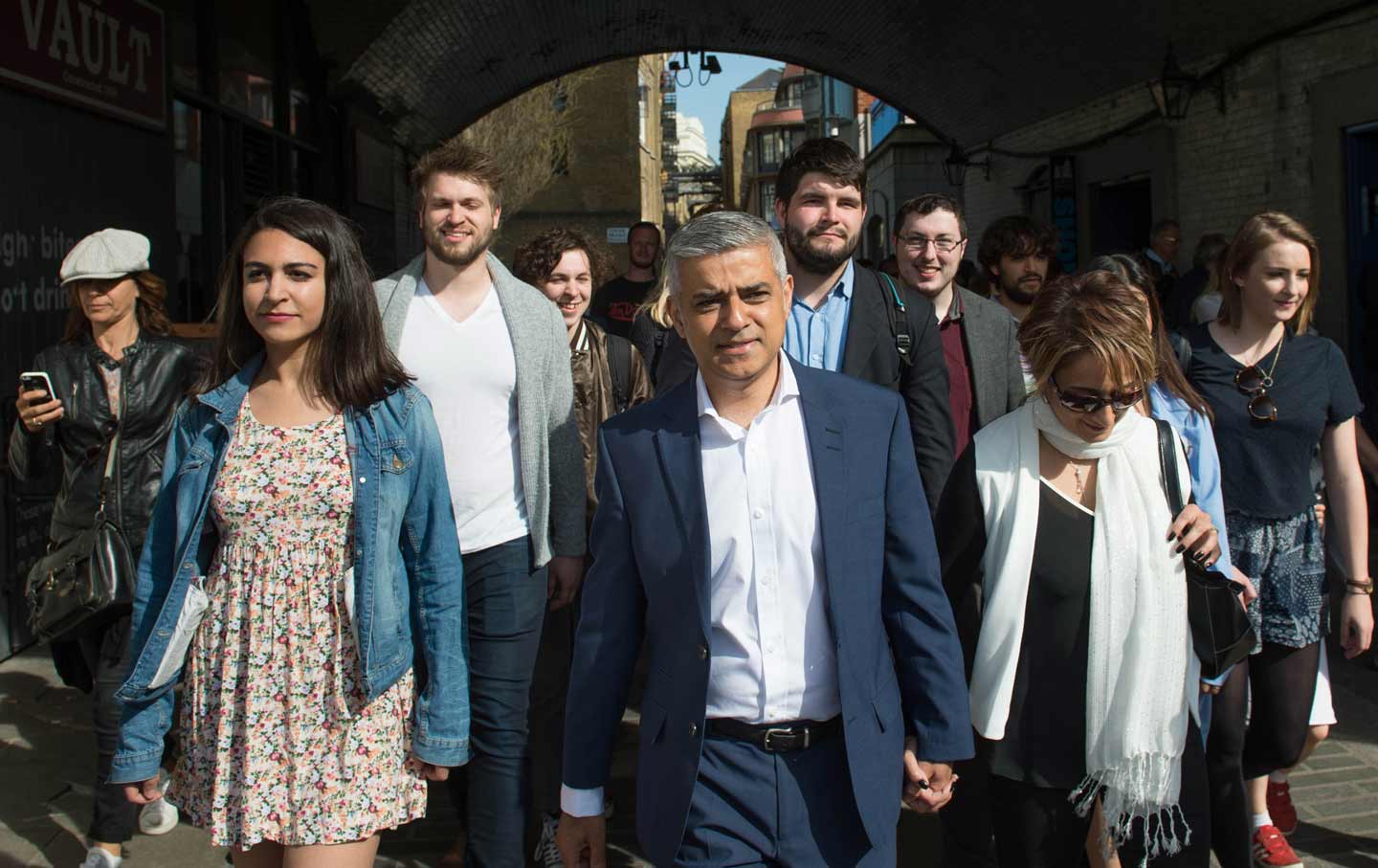 London—As Atticus Finch reminds us, “You rarely win, but sometimes you do.” This afternoon, some 17 hours after the polls closed, Labour’s Sadiq Khan was provisionally declared the next mayor of London. First-preference votes put the Labour candidate ahead by 44 percent to 35 percent for Tory candidate Zac Goldsmith, and though Khan’s victory won’t be official until second-preference votes from various smaller parties are counted, they aren’t expected to change the result. (Britons vote by marking an X on paper ballots, which works perfectly in a normal parliamentary constituency but somewhat slower when 2 million people are voting. On the other hand, there’s always a paper trail—and no hanging chads.)

Khan’s victory is a huge win for Labour, which took back the capital after eight years of the Conservative Boris Johnson. Yet no sooner was the result announced than the airwaves were filled with Labour MPs complaining that there was “nothing to be cheerful about.” In Scotland, where a revived Tory Party edged Labour into third place in the Scottish Parliament behind the Scottish National Party, there was indeed scant occasion for rejoicing. Not even by the SNP, which, with just under half the vote, will now form a minority government. Labour also lost one seat in the Welsh Assembly, but kept enough to retain control of the government, with the Tories and the Liberal Democrats losing a total of seven seats—which were picked up by the far-right UK Independence Party.

But in local council elections across England, the Labour meltdown that journalists and pollsters had been confidently predicting—and preparing to blame on leader Jeremy Corbyn—never happened. Instead, when all the votes are counted Labour will probably end up slightly increasing its share of the vote in England—though it will still be a long way from being able to seriously challenge the Tories for power in Westminster.

That election, however, is four years in the future, and the main consequence of yesterday’s vote is that the majority of Labour MPs—who never liked Corbyn in the first place, but have had to pretend to accept him as leader after an overwhelming majority of party members chose him—lost the pretext they were hoping for to stage a coup. That was what was mainly behind the hysterical headlines in the past week charging that Labour—or the left—was in crisis over anti-Semitism. As I’ve written before, Labour is in crisis. And there is certainly anti-Semitism in Britain—including on the left. But the attempt to link the two was for the most part a cynical campaign aimed at discrediting Corbyn (a longtime stalwart of the Palestinian cause). That it also played right into the hands of a despicable Tory campaign to depict Sadiq Khan—a Muslim who voted in favor of gay marriage, and who said he wanted to be “the most pro-business mayor” London has ever had—as a dangerous radical deterred them not at all.

That’s because for the Blairites and their allies inside the Labour Party, smearing Khan was an each-way bet. If it had worked, today’s biggest headline would have been “Labour Lose London”—which would certainly have been blamed on Corbyn and Labour’s purported anti-Semitism. But if it failed—as it has—Khan’s victory, and the size of his personal mandate, would make Europe’s first Muslim mayor Corbyn’s most dangerous potential rival. (I’ll leave it to the psychohistorians to decide how Ken Livingstone’s many “helpful” interventions fit into that calculus.)

For today, it is enough to say that in 21st-century Britain, the son of a bus driver has beaten the son of a billionaire. And that Londoners—facing a fear campaign depicting Muslims as un-British and Labour as untrustworthy, and a barrage of poisonous rhetoric seeking to pit Sikh against Hindu, Jew against Muslim, and native-born Britons against immigrants—have risen to the occasion and defied the hatemongers. Something for Americans to think about between now and November.