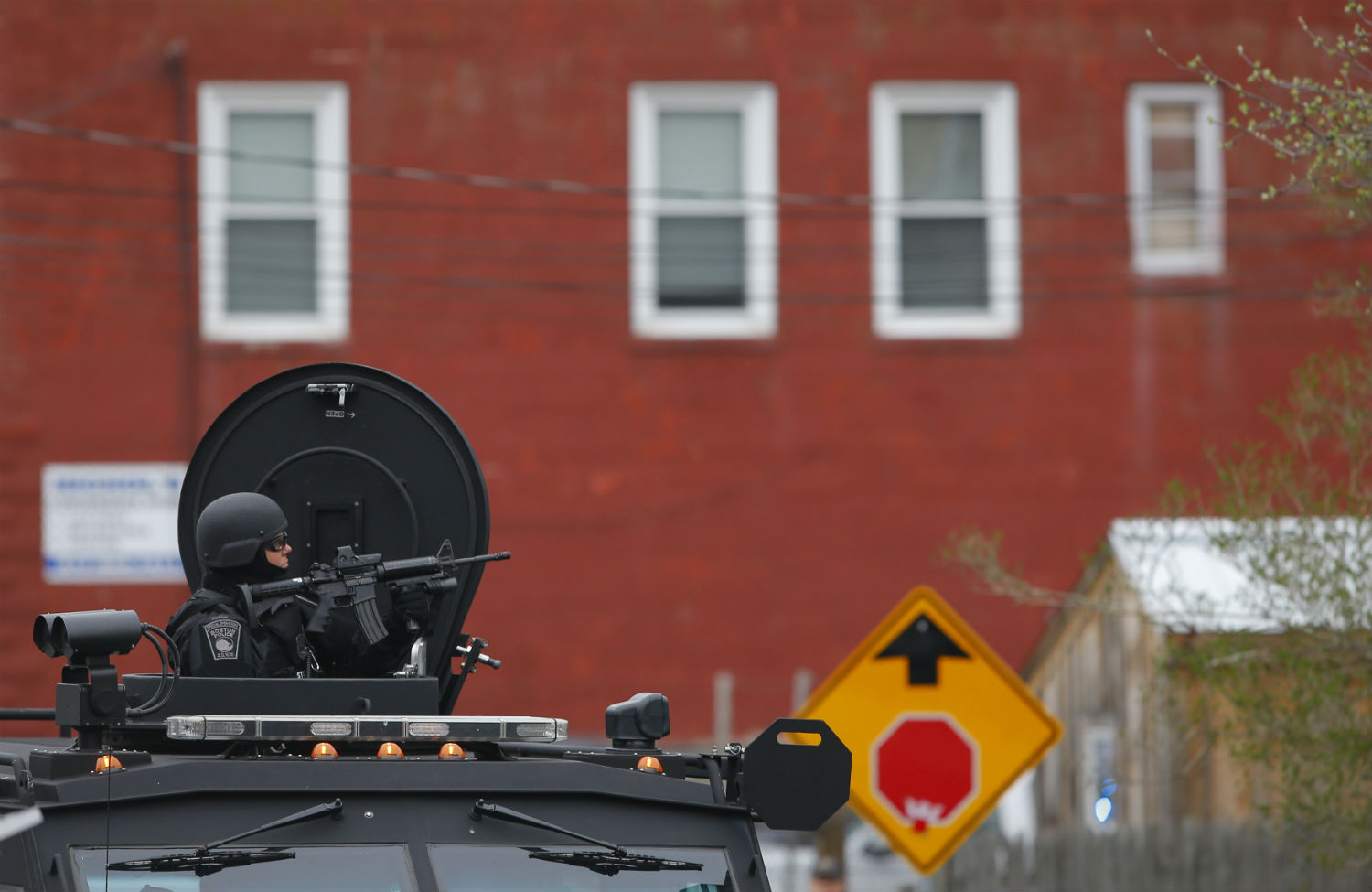 A police officer takes position during a search for the Boston Marathon bombing suspects in Watertown, Massachusetts, April 19, 2013. (Reuters/Brian Snyder)

As someone who has reported from most of the Olympic sites since 2002, I have written—often—that these games, so treasured by athletes and fans, operate off-camera as a colossal scam. It doesn’t take Naomi Klein to see that the games arrive with a shock doctrine of debt, displacement and militarization of public space. This has always been the case, but since 9/11, as the security needs for the Olympics have exploded alongside the profit margins of private security and tech firms, it has become an utter disaster for host cities. In fact, staging the games has become so burdensome that the only countries which seem to want the them are places that have a more, let’s just say, dictatorial method of handling cost overruns and dissent among the general populace.

This however is not stopping the United States Olympic Committee from undergoing a full court press to host the 2024 summer games, and in fact the USA is considered “the favorite” to win the bid by Olympic watchers. The cities in play are Boston, DC, Los Angeles and San Francisco, with DC and Boston said to be the front-runners. Consider this column a clarion call to these four remarkable cities: start organizing now to keep the games the hell out of your town.

In Boston, they are already erecting the political barricades. An organization called No Boston Olympics has launched an effort in advance of the USOC’s December decision as to which city will represent the United States in the bidding process. One of their members, Chris Dempsey, responded to my query by e-mail:

The core of No Boston Olympics is a group of young local residents who believe that an Olympics would be a costly distraction from more important and pressing civic priorities. Our grassroots campaign is focused on three priorities: (1) direct outreach to USOC members to make them aware of independent public polling that shows Massachusetts voters do not support a Boston bid, (2) educating civic leaders and citizens about the substantial downsides of an Olympic bid, and (3) exploring opportunities to provide the public with a voice in a process that has otherwise been conducted behind closed doors.

Here is hoping that activists throughout the city of Boston are successful. I spoke with someone connected to the International Olympic Committee who told me that Boston has rocketed to the top of their consideration list because of how the city was able to shut itself down after the Boston Marathon bombing. Few things expose the disturbing thought processes of the IOC quite like this logic. The post-marathon paralysis of police and surveillance and the frightening exercise of total power that was whipped out as quickly and lethally as a switchblade would become the Olympic-norm for three weeks. Anyone who felt a particularly neon-bright target on their back in those chilling days, because of their religion, their dress or the color of their skin, would have that affixed to them like a semi-permanent tattoo for a full year in the lead-up to the lighting of the Olympic torch. A city that brands itself as a cradle of liberty would be defined by drones, thousands of new cameras and a level of military hardware that—based upon what I saw in Rio for the World Cup—has to be seen in order to be believed. Imagine August 2014 in Ferguson, Missouri, except with fleeting glimpses of Olympic horse dressage, seen through the haze of military-grade tear gas, and you can understand why No Boston Olympics is fighting back.

As for the other cities in contention, I would ask the people of the Bay Area and Los Angeles to think about the gentrification-on-steroids that is already taking place in their cities, pushing people to spend $750 a month to sleep in someone’s laundry room, and then imagine all of these issues worsening dramatically. In the case of DC, the Olympic viruses of debt, displacement and militarization are business as usual in the nation’s capitol. The idea that the Olympics could actually exacerbate these profound problems can seem unimaginable, but to paraphrase Lawrence Fishburne in Deep Cover, the thing about cities is that the reality can always get worse.

To be clear, this missive is not a call for the people of the United States to band together, in the spirit of NIMBY, and kick out the Olympics in the hope that a nation with even greater social ills than the USA has to shoulder the burden. It is the hope that the cities of Boston, Los Angeles, San Francisco and DC join the international community of cities, such as Oslo and Krakow, that have, because of public pressure, just said “hell no” to hosting the games. If every city followed their lead, we could hound the IOC back to their tax haven in Lausanne, Switzerland… a place, come to think of it, that would make one hell of a host city for the next twenty Olympics.