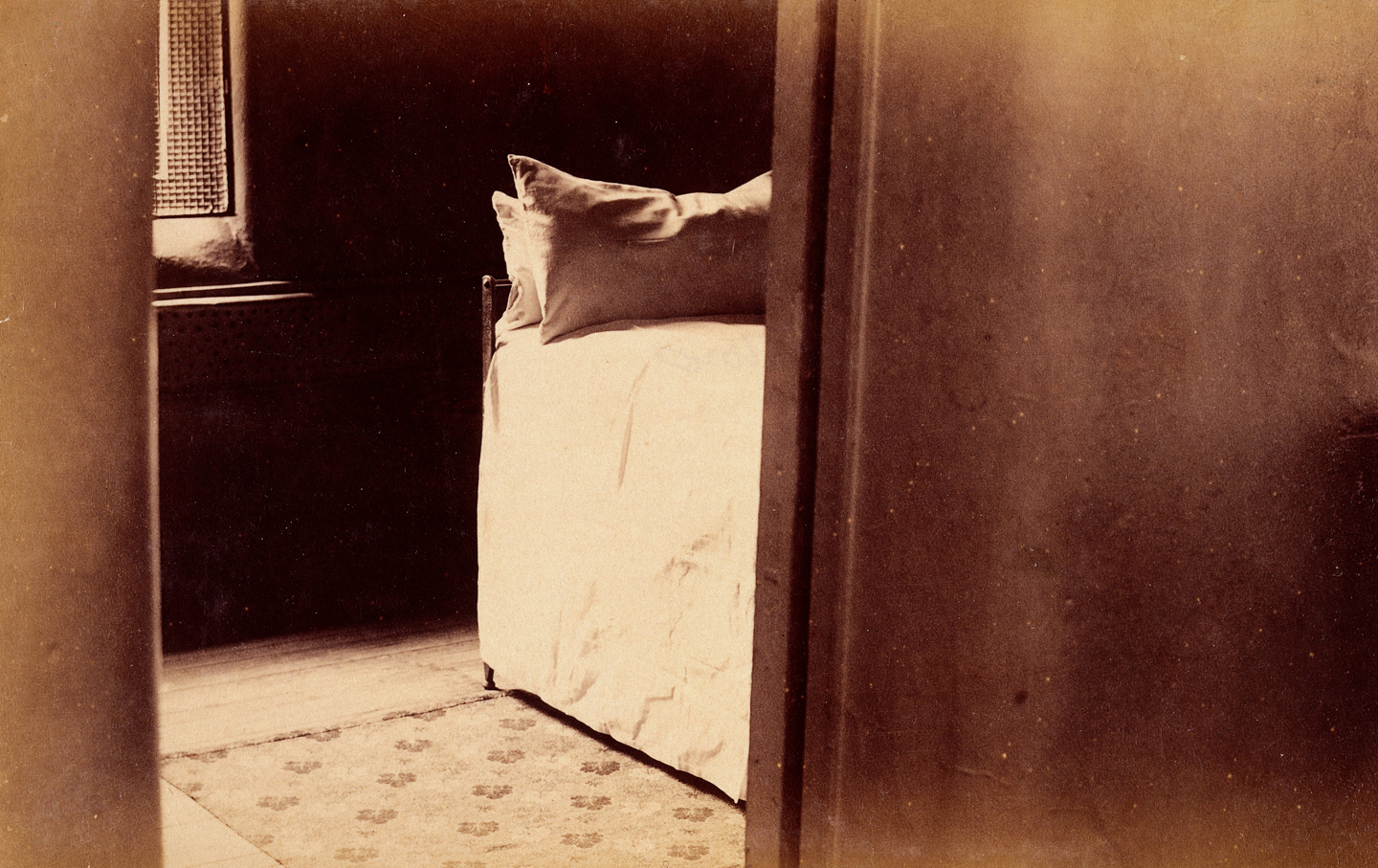 New York City likes to wear its makeup thick. In places like Fresh Kills, Rikers, and Bellevue—a landfill, a jail, and a public hospital, respectively—you’ll find glimpses of the things that the city would rather not show you about itself: its dirt, its inhumanity, its sickness. But each of those institutions sits far from most people’s everyday paths through the city. Stay long enough in New York, however, look and listen closely enough, and you will catch the occasional glimpse: the late-night trash trains moving slowly through the subway system; the view of a sprawling jail complex as you fly into LaGuardia Airport; the fables surrounding Bellevue’s psych ward, which has become a synecdoche for the hospital. (After his own stint there, the bassist Charles Mingus composed “Lock ’Em Up,” whose subtitle promises a “Hellview of Bellevue.”)

David Oshinsky, author of the Pulitzer Prize–winning Polio: An American Story, delves into the history of the medical facility in his latest book, Bellevue: Three Centuries of Medicine and Mayhem at America’s Most Storied Hospital. A historian at the University of Texas, Oshinsky argues that the cultural narratives surrounding Bellevue have eclipsed much of its medical and historical significance to New York City, and indeed to America: “The relentless focus on its eccentricities has obscured its role as our quintessential public hospital.” Oshinsky attempts to remedy this (mis)understanding by concentrating on Bellevue’s robust and distinguished medical legacy.

He colors his study with a multitude of stories, all of which stress Bellevue’s many important medical and scientific “firsts.” We learn, among other things, that Bellevue was the first hospital to perform a birth by Caesarean section in the United States; that it innovated the use of ambulance services during the Civil War; and that it helped pioneer medical photography in the mid-19th-century.

Bellevue is America’s oldest public hospital, beginning its existence in 1736 as a meager six-bedroom almshouse on the site of today’s City Hall. In the 1700s, New York was hit by waves of epidemics—smallpox, diphtheria, scarlet fever, and influenza—that new immigrants brought with them. The spread and longevity of these diseases were heightened by the close proximity of residents and the poor sanitary conditions across the city. In 1795, the New York Common Council leased a parcel of land along the East River—known as “Bel-Vue”—as a place to quarantine victims of yellow fever some miles away from the city itself. After leasing Bel-Vue for several years, the city finally purchased the site in 1798, with the goal of providing “a single complex for the diseased, desperate, criminal, and insane.” By 1816, Bellevue had become the antidote for all of the rapidly growing city’s ills, as officials expanded the facility—now known as the “Bellevue Establishment”—to include an orphanage, a morgue, a pest house, a prison, and an asylum. Centralizing these public services in one place underscored the prevailing public-health approach at the time: containment and isolation.

Oshinsky contrasts Bellevue with New York Hospital, the city’s other key medical facility during this period, to demonstrate its burgeoning—and stigmatized—image with the public. New York Hospital “had been built as a refuge for the sick, [Bellevue] as a warehouse for the destitute,” he notes. “One had a welcoming facade; the other resembled a walled-in fortress.” So common was this attitude toward Bellevue that New York Hospital actually began “dumping its sickest patients” there.

Such circumstances, of course, yielded poor consequences. In 1847 and ’48, the “Great Epidemic” tore through New York, just one of many to hit the city in the 19th century. Bellevue experienced a deadly wave of typhus deaths during this period, partly instigated by the influx of Irish immigrants after the devastation of the potato famine. Because the symptoms of typhus—rash and fever—are often not outwardly recognizable, many sick new immigrants passed through the quarantine checkpoints undetected. The disease spread within New York’s immigrant communities, with poor living and sanitary conditions only accelerating its transmission. So destructive was the Great Epidemic that patient deaths at Bellevue hit a record 40 percent, and eight Bellevue employees died between 1847 and ’48. It was only then that the city began to act on the problems afflicting the institution, including by decreeing that it would no longer accept any “person…whose case is judged to be incurable.” Instead, “general and acute care would become top priorities,” Oshinsky writes.“Chronic and contagious cases would no longer clog the wards.”

Concurrent with this overhaul, calls were made to establish a medical school attached to the hospital. Bellevue had already hosted a series of clinical lectures that “physicians and medical students” had flocked to as it unveiled some complex and innovative new surgical procedures, including the first use of the hypodermic needle during surgery in 1856. In 1861, the Bellevue Hospital Medical College opened its doors, stressing to prospective students the benefits of “a hospital with ‘immense’ clinical resources.”

Oshinsky moves ahead with his history of Bellevue in short, crisp chapters, exploring its role in the Civil War—an event that hindered some of the sanitary reforms implemented in the 1850s—before arriving at the Bellevue Psychiatric Building, a wing that opened in 1933. Ever since building its first “lunatic asylum” in 1816, Bellevue had mainly acted as a halfway house for the city’s mentally ill, temporarily accommodating and assessing patients before sending most of them on to Blackwell’s Island (now known as Roosevelt Island) for treatment. Despite this, Bellevue is best known in popular culture for psychiatric care. There have been many notorious tabloid stories of celebrities held at the facility, and Billy Wilder’s Academy Award–winning 1945 film The Lost Weekend depicts one man’s stay at the grim “Alcoholics’ Ward” of Bellevue—or, as one nurse calls it, “Hangover Plaza.”

What ‘Bellevue’ leaves unexamined are the overarching mythologies shaping the hospital’s relationship to the city.

Oshinsky’s treatment of Bellevue’s psychiatric facilities and care is the weakest section of the book, and it seems this was a deliberate decision to de-emphasize its importance in the larger story of the hospital. Bellevue seeks to present an alternative narrative, one that emphasizes the important role the hospital has played in New York’s public-health history. But avoiding any direct discussion of the popular representations of Bellevue—or, indeed, of the luminaries who stayed there—only serves to remind readers of these grand cultural myths. And it doesn’t do enough to redirect or contextualize what everyone already knows about the hospital.

For that, you’re better off turning to Victor LaValle’s 2012 novel The Devil in Silver, set in a hospital not unlike Bellevue’s own psychiatric facility, which reckons with the state of America’s treatment of mental illness, one etched in disturbing, even horrifying terms. With echoes of One Flew Over the Cuckoo’s Nest, the novel’s protagonist, Pepper, is involuntarily committed to New Hyde Hospital for assaulting three police officers, and finds himself in a perpetual merry-go-round of suffering: being dulled by medications, trying to regain his sense of self, and rebelling against the hospital staff, only to be loaded up with more pills. LaValle not only demonstrates the invisibility of these kinds of social- and public-health crises, but also shines a harsh light on the way that public hospitals are misrepresented in the popular imagination. It is this kind of interrogation that is sorely lacking in Bellevue.

But as little as Oshinsky might care to admit it, the idea that Bellevue was just, or even primarily, a place for “crazies” has stuck in our cultural consciousness. As a 2008 New York magazine article suggests, what many New Yorkers see in Bellevue is actually a despairing reflection of the city itself: mythologized stories of Norman Mailer completely snapping and angrily stabbing his wife; Mark Chapman, assassin of John Lennon, locked away in the psychiatric ward as he quotes from The Catcher in the Rye; Allen Ginsberg, speaking of the insanity of his times, himself a patient at the hospital. It is this kind of mythology, this symbolic cultural legacy, that ultimately eludes Oshinsky.

Thus, what Bellevue leaves unexamined are the many overarching—and contradictory—mythologies shaping the hospital’s relationship with the culture of the city. For example, Oshinsky doesn’t discuss the city’s decision in 2008 to draw up plans for redeveloping the former Bellevue Psychiatric Hospital as the site of a new hotel. Although these plans were later scrapped in 2010—city officials cited the recession and an increased demand for shelters—this potential redevelopment does underline the precariousness that public hospitals in America continue to face, especially one like Bellevue. Moreover, the decision to redevelop the psychiatric wing in particular demonstrates a symbolic desire to rewrite Bellevue’s history, revising its popular image by erasing this infamous arm of the hospital completely.

Instead, Oshinsky sticks firmly to Bellevue’s medical history, arguing that the hospital has remained a “vital safety net,” and stressing how its dedication to New York’s most vulnerable and stigmatized populations, as well as its outstandingly robust research and medical care and its unwavering commitment to a city buffeted by some of history’s worst recent catastrophes (the 9/11 attacks, Superstorm Sandy), all make Bellevue unlike any other medical institution in the United States—and, Oshinsky argues, one whose future must be guaranteed.

In the book’s final chapter, “Rebirth,” Oshinsky brings this history up to the present day by chronicling the debilitating damage done to Bellevue, and other downtown hospitals, during Superstorm Sandy. “If there was a silver lining, it was the recognition of how valuable Bellevue’s services were, and how hard it was to get on without them,” he writes. Especially impressive is the way in which Bellevue handled the storm: “Doctors at other city hospitals were struck by the level of coordination and sophistication among the teams of Bellevue residents, nurses, and attending physicians who arrived to treat their evacuated patients.” In 2014, Bellevue faced another challenge with the arrival of Craig Spencer, the physician and Doctors Without Borders volunteer who tested positive for the Ebola virus—and there, too, the hospital acquitted itself admirably. Oshinsky quotes Bellevue’s chief of medical services, who tells him “We can handle just about anything,” and then affirms that statement himself: “For all the fear and trouble it brought, Ebola proved him right.”

Bellevue rightly stresses the importance of public hospitals in America. Up against insurance companies, private hospitals with more lobbying power, and the demands of treating ever-poorer patients, hospitals like Bellevue face difficult challenges. It’s too bad they also have to deal with a public imagination that either ignores their vital services or caricatures them. Oshinsky’s book goes a long way toward correcting that record, but his refusal to address Bellevue’s cultural history is an important opportunity missed.