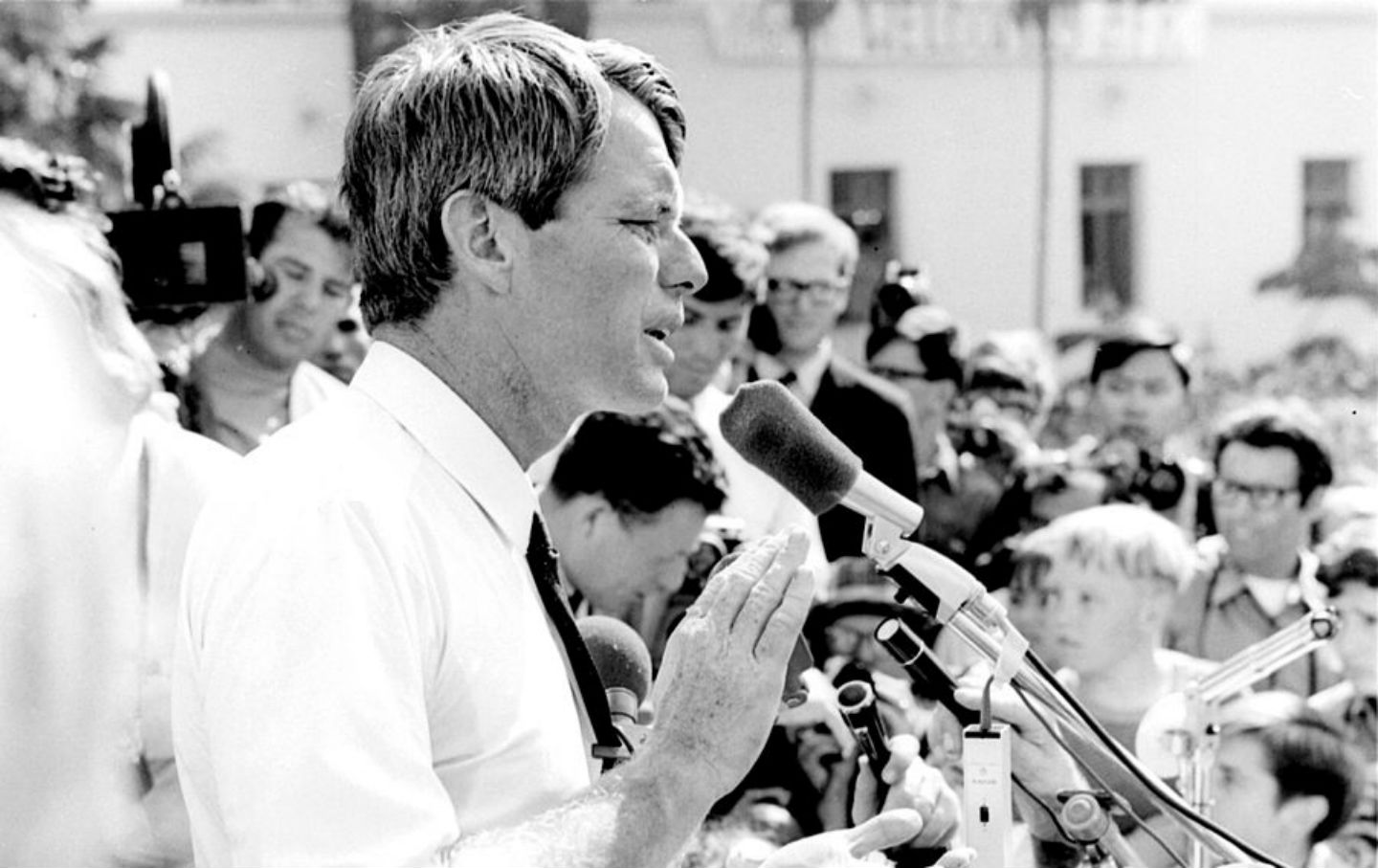 Robert F. Kennedy died on June 6, 1968, at a critical turning point in a presidential campaign that had the potential to bend the arc of American history. Kennedy had just won the California primary and was preparing a summer crusade to wrest the Democratic nomination from Vice President Hubert Humphrey—and with it the prospect for defining the party as a force for economic and social justice and peace.

Kennedy may not have begun as a perfect messenger, but after the assassination of his brother less than five years earlier, RFK started a journey that saw him moving beyond the cautious Cold War liberalism of Humphrey and Presidents Kennedy and Johnson. There were many measures of that progression. But the one that shouts across the 50 years since his death is found in the speech the senator from New York delivered to a crowd of 20,000 at the University of Kansas, on March 18, 1968.

Speaking two days after he had announced his entry into the presidential race, Kennedy signaled that his would be a radically different campaign. It would, he suggested, seek to alter the national narrative at a deeply unsettled moment. The goal would be to open up a discussion of what might be possible in a more united and forward-looking nation.

“I don’t want to run for the presidency—I don’t want America to make the critical choice of direction and leadership this year—without confronting that truth. I don’t want to win the support of voters by hiding the American condition in false hopes or illusions,” Kennedy told the crowd of college students and anti–Vietnam War activists. “I want us to find out the promise of the future, what we can accomplish here in the United States, what this country does stand for and what is expected of us in the years ahead. And I also want us to know and examine where we’ve gone wrong. And I want all of us, young and old, to have a chance to build a better country and change the direction of the United States of America.”

Speaking of the millions of Americans who were “living in the hidden places, whose names and faces are completely unknown,” Kennedy said it was vital to engage in a national discussion not just about the Vietnam War—the issue that had drawn another insurgent, Minnesota Senator Eugene McCarthy, into the race—but about poverty amid plenty, racial disparities and misguided national priorities.

“If we believe that we, as Americans, are bound together by a common concern for each other, then an urgent national priority is upon us. We must begin to end the disgrace of this other America,” explained Kennedy, who said that:

[This] is one of the great tasks of leadership for us, as individuals and citizens this year. But even if we act to erase material poverty, there is another greater task, it is to confront the poverty of satisfaction—purpose and dignity—that afflicts us all. Too much and for too long, we seemed to have surrendered personal excellence and community values in the mere accumulation of material things. Our Gross National Product, now, is over $800 billion dollars a year, but that Gross National Product—if we judge the United States of America by that—that Gross National Product counts air pollution and cigarette advertising, and ambulances to clear our highways of carnage. It counts special locks for our doors and the jails for the people who break them. It counts the destruction of the redwood and the loss of our natural wonder in chaotic sprawl. It counts napalm and counts nuclear warheads and armored cars for the police to fight the riots in our cities. It counts [mass murderer Charles] Whitman’s rifle and [mass murderer Richard] Speck’s knife, and the television programs which glorify violence in order to sell toys to our children. Yet the gross national product does not allow for the health of our children, the quality of their education or the joy of their play. It does not include the beauty of our poetry or the strength of our marriages, the intelligence of our public debate or the integrity of our public officials. It measures neither our wit nor our courage, neither our wisdom nor our learning, neither our compassion nor our devotion to our country, it measures everything in short, except that which makes life worthwhile. And it can tell us everything about America except why we are proud that we are Americans.

If this is true here at home, so it is true elsewhere in world. From the beginning, our proudest boast has been the promise of Jefferson, that we, here in this country would be the best hope of mankind. And now, as we look at the war in Vietnam, we wonder if we still hold a decent respect for the opinions of mankind and whether the opinion maintained a descent respect for us or whether like Athens of old, we will forfeit sympathy and support, and ultimately our very security, in the single-minded pursuit of our own goals and our own objectives. I do not want, and I do believe that most Americans do not want, to sell out America’s interest to simply withdraw—to raise the white flag of surrender in Vietnam—that would be unacceptable to us as a people, and unacceptable to us as a country. But I am concerned about the course of action that we are presently following in South Vietnam. I am concerned, I am concerned about the fact that this has been made America’s War. It was said, a number of years ago that this is “their war” “this is the war of the South Vietnamese” that “we can help them, but we can’t win it for them” but over the period of the last three years we have made the war and the struggle in South Vietnam our war, and I think that’s unacceptable.

Kennedy’s willingness to rethink how we talk about the progress was bold, and necessary, in 1968. If the candidate had lived, if he had been able to carry his radical thinking on this issue into a fall campaign against Richard Nixon and George Wallace, there is no telling where the discourse might have gone. If he had been elected president in the fall of 1968, there is no telling how transformational this new approach might have been for the United States—and the world.

As we mark the 50th anniversary of Kennedy’s death, and we consider the ideas that generated in a remarkable 85-day campaign, it is important to recognize that the United States still needs to rethink how we measure the successes and failures of society. Nobel Prize–winning economist Joseph Stiglitz has argued in recent years, with regard to the now more commonly discussed Gross Domestic Product, that “GDP is not a good measure of economic performance, it’s not a good measure of well-being.”

“GDP in the US has gone up every year except 2009, but most Americans are worse off than they were a third of a century ago,” says Stiglitz. “The benefits have gone to the very top. At the bottom, real wages adjusted for today are lower than they were 60 years ago. So this is an economic system that is not working for most people.”

Stiglitz argues for making a break with “GDP fetishism” and instead embracing more accurate measures of economic and social progress.

He is not alone in entertaining the concerns that Robert F. Kennedy raised 50 years ago.

“Kennedy was right,” noted The Economist in a recent review of concerns about bad measures of our nation and our world. “Much that is valuable is neither tangible nor tradable.”