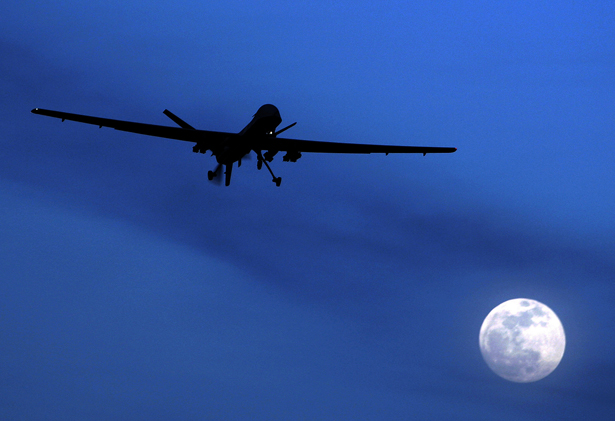 Last night I was blown away, though happily not literally, by a brilliant stage performance at Page 73, a theater in Tribeca, in New York City, that often presents plays that have never before been produced in the city. Its current production is Grounded, a play written by George Brant that takes on America’s drone warfare program. It’s a one-woman show, acted by Hannah Cabell, who delivers a searing performance that left me stunned. She portrays a gung-ho, top-gun fighter-bomber pilot in Iraq and Afghanistan who, after becoming pregnant, is assigned to pilot remote drones at Creech Air Force Base outside Las Vegas.

At first reluctant to abandon “the blue,” Cabell’s character adapts to long days of boredom in front of a gray screen, days only occasionally marked by blowing up groups of “military-age males” in the Afghan desert. But as she tracks a “high-value target,” described in the play as a “Number Two”—a riff on the seemingly endless list of Al Qaeda Number Two’s killed since 2001—she finds herself unable to balance her day job with her incongruous role as a wife and mother back at the house to which she returns each day. I won’t reveal too much else about what happens, but do yourself a favor: if you’re in the New York area before the show ends its run on February 1, go see it. (And if you’re a theater producer elsewhere, make plans to put this on stage, with Cabell if she’s available.)

Google “drones“ these days and for every mention of President Obama’s policy of remote killing in Pakistan, Somalia, Yemen, Libya and elsewhere, you’ll get information on drones that might be used to deliver pizzas or online purchases and headlines like: “Berkshire realty company uses drones to film luxury estates.” Or about a bill, recently passed by New Jersey’s state assembly, to regulate the use of unarmed drones by state law enforcement agencies.

But the killing goes on. To be sure, the sheer number of drone strikes has been dropping in recent years, but that’s little comfort to the innocents killed or to the friends and relatives of targeted individuals who become collateral damage. (Such collateral damage plays a critical role in Grounded.) According to the Bureau of Investigative Journalism, which tracks drone strikes, there were twenty-seven drone attacks in Pakistan carried out by the CIA in 2013 and thirty-eight more in Yemen, including the December 12, 2013, strike that bombed a wedding party, killing as many as fifteen civilians, injuring up to thirty more. (There were 127 strikes in Pakistan in 2010, seventy-four in 2011, and forty-seven in 2012, according to the BIJ.)

The declining pattern of strikes is welcome, but the very use of drones raises fundamental questions about US policy. Aside from the moral questions, there are also important issues concerning the usefulness of drones, according to Science Daily, which reports on a pair of studies published in a military journal called Dynamics of Asymmetric Conflict that challenge drones as a means of warfare. According to the site:

Metin Gurcan’s “Drone Warfare and Contemporary Strategy Making: Does the Tail Wag the Dog?” argues that increasing use of drones in asymmetric conflict is reversing the dominance of strategy over tactics and may be undermining civilian control of the military. Gurcan notes that while there are a number of advantages to using drones, such as effectiveness at removing key targets and avoidance of friendly casualties, they may also increase the power of extremists amongst civilian populations by creating a siege mentality.

And they report on another study that delves into the question of public support for remote killing:

Tom McCauley’s “U.S. Public Support for Drone Strikes against Asymmetric Enemies Abroad: Poll Trends in 2013” shows that, while a strong majority of U.S. citizens are in favor of using drones against terrorists in foreign lands, a small and increasing minority are against their use. In contrast, majorities in most countries are opposed to U.S. drone attacks against terrorists. McCauley notes, “Should drones’ unpopularity in the United States continue to increase, and their unpopularity in other countries persist, they may well become politically impractical, no matter how convenient and cost-effective the technology may be.”

Still, drone warfare is big business and, according to Science Daily, the United States spent $5.1 billion in 2013 on drone strikes. According to the International Business Times, at least a dozen companies are vying for what they expect to be an expanded military drone market in 2014-2015, including Boeing, General Atomics, Lockheed Martin, Northrop Grumman, SAIC, Israel Aerospace Industries and Textron. Says IBT:

Boeing has had a hand in the drone market for a number of years, mostly developing for the U.S. military. They have more recently been testing the hydrogen-powered Phantom Eye drone, which Boeing says can stay at 65,000 feet for up to four days without refueling.

[General Atomics] is credited with building the Predator drone, the much-feared aircraft that saw action way back during the Balkans war, where the Americans lost two. Since then it’s been deployed in Afghanistan, Pakistan, Iraq, Yemen, Libya, Somalia, Iran and the Philippines. Last year, the company signed a deal to supply $197 million worth of drones to the United Arab Emirates….

Like Boeing, Lockheed is testing a drone—the Stalker—that can stay in the air for days at a time….

Founded only in 1994, Northrop has quickly risen to become one of the top suppliers of military hardware in the world. In 2012, the company sold $1.2 billion worth of drones to South Korea.

In other words, your military-industrial complex at work.

None of this is found in Grounded, which powerfully focuses on the human element, on both sides of the joystick that unleashes drones overseas. Don’t miss it.