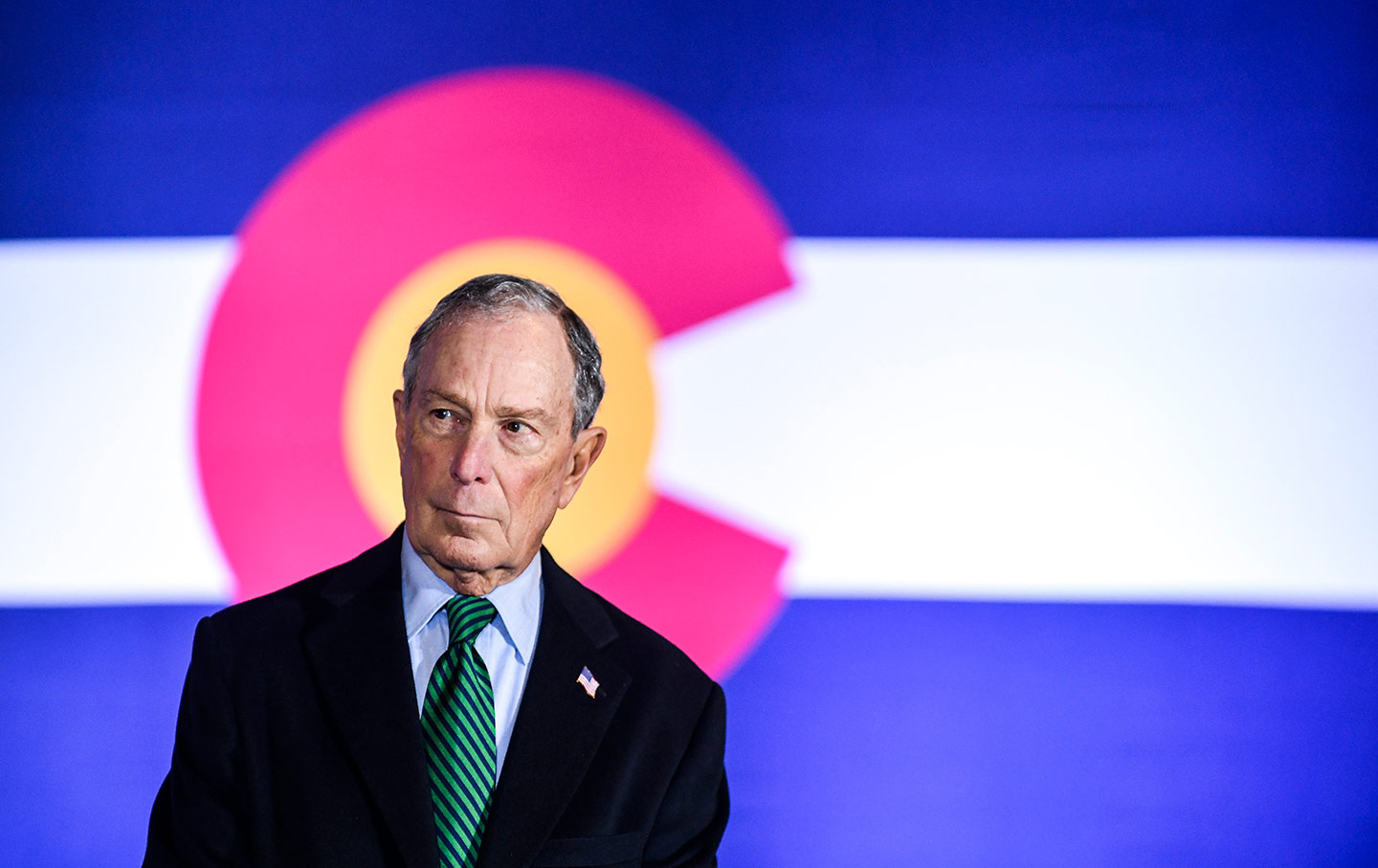 Michael Bloomberg waits to speak at an event to introduce his gun safety policy agenda at the Heritage Christian Center. (Photo by Michael Ciaglo / Getty Images)

Michael Bloomberg’s liabilities as a political candidate are so glaringly obvious that it’s easy to dismiss his presidential bid as a vanity project. He is utterly devoid of charisma, has no real organic base in the Democratic Party, and is a viable candidate only because he’s filthy rich and is willing to inundate the race by opening up his nearly limitless money pit.

This unprepossessing profile hasn’t stopped big name pundits like Tom Friedman and Bret Stephens, both appearing in the pages of in The New York Times, from extolling Bloomberg as a potential savior. Writing even before Bloomberg entered the race, Stephens argued that all the existing Democratic candidates were weak against Trump except for Bloomberg.

“But if trouncing Donald Trump is essential to the preservation of liberal democracy, then it won’t do to cross fingers and hope he stumbles,” Stephens averred. “A Bloomberg candidacy would be a gift to Democrats, the country, and the world. Sneer at it at your peril.”

Heeding Stephens’s injunction, I forced myself to momentarily stop sneering at Bloomberg’s candidacy and try to empathize with his supporters. To go by Bloomberg’s words and those of advocates like Stephens, the case for Bloomberg goes something like this: In an age of polarization, Bloomberg could bring the nation together by being the voice of centrists who are being abandoned by both the right and left. Bloomberg’s political profile of social liberalism combined with economic conservatism would draw voters who don’t like Donald Trump but find Elizabeth Warren and Bernie Sanders too radical. He’s more mentally agile than Joe Biden and less callow than Pete Buttigieg. Bloomberg could not only defeat Trump but also pull the United States away from the polarizing populism offered by the extreme left and the extreme right, political tendencies that are destabilizing democracy.

Implicit in the argument is that Bloomberg’s centrism is a viable alternative to Trump’s authoritarianism. What this line of thought ignores is the fact that the antidemocratic impulse isn’t just found on the extreme left or the extreme right but also among centrists. Bloomberg himself has an extensive record of pushing for authoritarian measures.

The affinity of centrists with authoritarianism makes sense when we consider that people on the extreme ends of the political spectrum are likely to be wary of unchecked state power. They can easily imagine such power being used against them. Centrists like Bloomberg, who are safely ensconced in mainstream society and hold positions of high social status, are more likely to take an uncritical view of trampling on democratic norms, since they have the comfort of knowing that the authorities are unlikely to go after reputable figures.

Writing in The New York Times, political researcher David Adler cited comparative polling showing that “across Europe and North America, centrists are the least supportive of democracy, the least committed to its institutions and the most supportive of authoritarianism.” While it’s become commonplace to locate the authoritarian threat as a product of extremism, Adler found “evidence of substantial support for a ‘strong leader’ who ignores his country’s legislature, particularly among centrists. In the United States, centrists’ support for a strongman-type leader far surpasses that of the right and the left.”

Adler’s analysis helps explains why Bloomberg, the self-styled centrist, has evinced such a strong autocratic streak in both his time as mayor and as a private figure. After his entry into the presidential race, Bloomberg made a tactically necessary apology for his longtime support for stop-and-frisk, the policy of racial profiling he supported as mayor of New York and that led to the unjustified police harassment of millions of people of color.

As Atlantic writer Conor Friedersdorf noted, stop-and-frisk was part of a larger pattern of scorn for civil liberties. In Bloomberg’s time as mayor of New York, his administration shunted anti-war protesters into narrow enclosures, spied for years on protesters planning to march against the Republican convention in 2004, subjected Muslims to religious profiling, and amped up the war on drugs.

As Friedersdorf rightly suggests, it would be hypocritical of Democrats to lambast Trump’s authoritarianism if they ran Bloomberg as the alternative. Friedersdorf reasonably asks how Democrats would respond if Trump behaved as Bloomberg did: “Had Trump spent years sending armed agents of the state to frisk people of color, 90 percent of them innocent, would you forgive him? How about if Trump sent undercover cops to spy on Muslims with no basis for the targeting other than the mere fact of their religious identity? What if he thwarted the ability of anti-war protesters to march in New York City?”

In a September appearance on the PBS show Firing Line, Bloomberg gave vent to his authoritarianism again by making the bizarre assertion that Chinese president Xi Jinping “is not a dictator.” Pressed by interviewer Margaret Hoover, Bloomberg said, Xi “has a constituency to answer to.” Bloomberg added, “No government survives without the will of the majority of its people.” By this argument, only governments facing open revolt can be called dictatorships.

As with Trump, it’s difficult to disentangle Bloomberg’s business interests from his ideology. As New York magazine notes, “The billionaire has vast financial interests in China, and those interests have allegedly compromised his civic-minded endeavors in the past. In 2013, the New York Times reported that Bloomberg News had killed an investigation that had threatened to upset Chinese officials.”

Bloomberg’s extensive media empire is being compromised by his political ambition, which is a more insidious example of how he represents an authoritarian threat. Bloomberg has dictated that his employees aren’t allowed to investigate either himself or other Democratic candidates. This gave Donald Trump’s White House a rare opportunity to pose as a defender of press autonomy when it criticized the policy.

The policy raised the ire of staff at Bloomberg News. Asked about this by CBS, Bloomberg said, “They get a paycheck. But with your paycheck comes some restrictions and responsibilities.”

Donald Trump has shown the problems with having a businessman president. Not being used to compromise or the rules of the political system, Trump has run roughshod over American democracy as he tries to govern like a boss rather than a democratically accountable chief executive. Bloomberg, to judge by his time as New York City mayor and his actions since, suffers from the same problem. Bloomberg is no alternative to Trump but would simply replace reactionary authoritarianism with centrist authoritarianism.