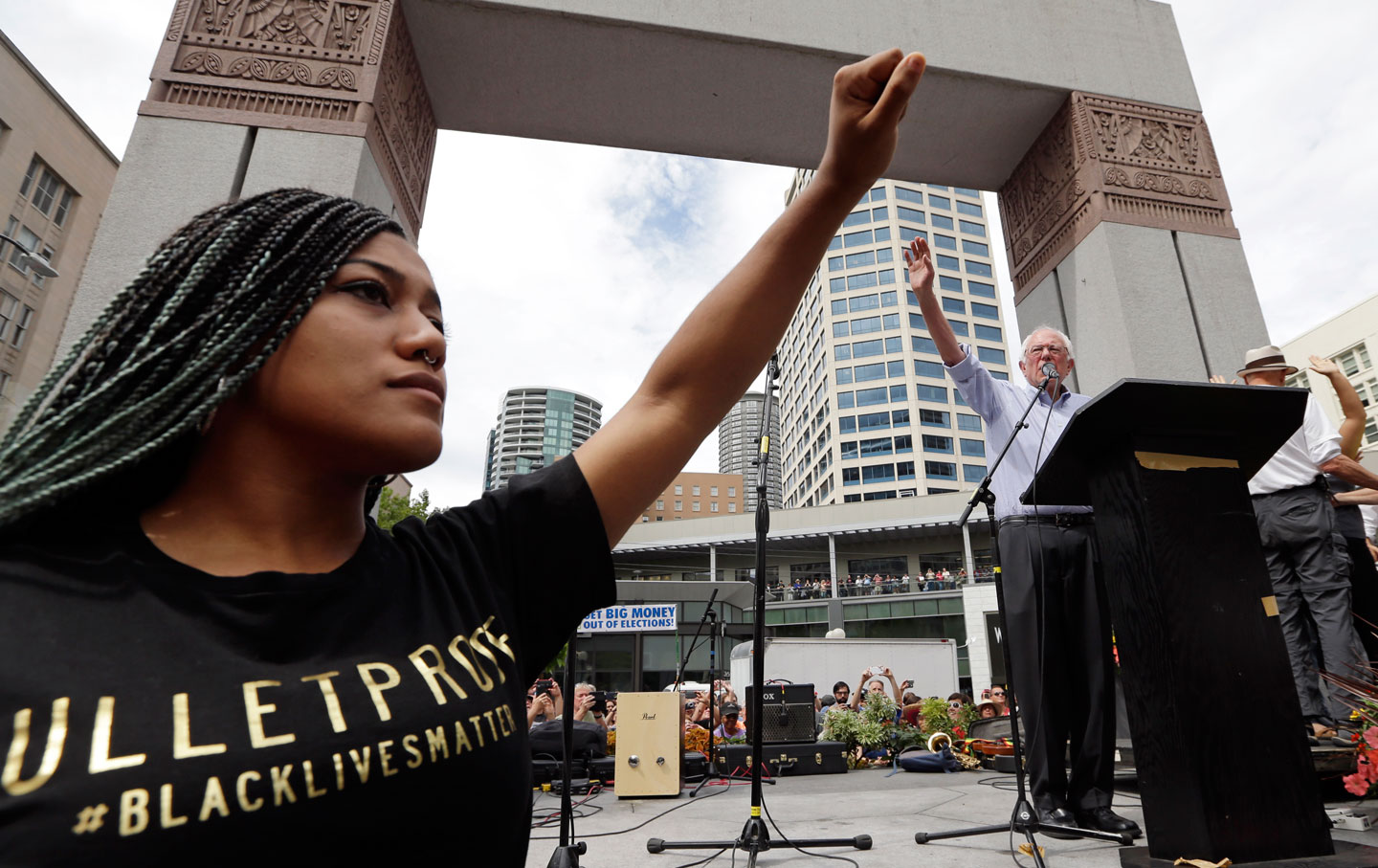 On August 8, to mark the pending anniversary of Michael Brown’s death, two Seattle Black Lives Matter activists interrupted a Bernie Sanders rally and, in the lexicon of the movement, shut it down.

The event was planned to highlight Sanders’s fight to protect Social Security and Medicare; Sanders later said he’d also intended to “talk about the issues of Black Lives” if he’d gotten the chance. Instead, he ceded the microphone, for the second time this summer, as people in the crowd hurled invective at two black women who dared to challenge their politics.

White people of all political stripes will be challenged, even shaken by this movement. That is a cost worth bearing.

The two activists, Marissa Johnson and Mara Willaford, stormed the stage as Sanders began speaking and demanded an opportunity to address racial injustice in Seattle. After a negotiation, the event organizers agreed to give Johnson the microphone. The crowd overruled that decision, erupting in boos. Johnson attempted to shout over the boos. She ticked off local examples of racial injustice—educational inequities, police violence, displacement in black neighborhoods—and challenged the largely white crowd to ensure that black lives matter in these debates. The booing intensified. She began to cry and called the hecklers racists, which elicited more booing. Her primary demand was a moment of silence in honor of Michael Brown’s death, in which the crowd participated unevenly.

This was the second confrontation between Black Lives Matter activists and Sanders, and the tension has sparked productive debate in Camp Bernie about race. In recent weeks, the campaign has begun responding to critics who want to hear a stronger message on racial justice. Just hours after the Seattle protest, Sanders released his racial-justice platform, which focuses on what he calls the “four central types of violence waged against black and brown Americans”: physical, political, legal, and economic.

He’s also hired as press secretary Symone Sanders, a black woman with roots in racial-justice organizing. She’s spoken openly about challenging Sanders to understand the link between racial and economic oppression, and she’s rejected the idea—advanced by many, including Sanders—that the Black Lives Matter activists have misplaced their efforts in protesting him. “Do I think everyone in the movement agrees with the way the protesters commanded the stage today? No,” she told BuzzFeed in Seattle. “Am I going to condemn the protesters for standing up and expressing themselves? No. Because their voices matter.”

Sadly, too many of Sanders’s white supporters disagreed, in tellingly vitriolic terms. Following the Seattle protest, Johnson and Willaford posted a statement on Facebook explaining their action. In the responding comments, people defending Sanders call the women “bitches,” “nits,” a “disgrace,” “hood rats,” and more. Conspiracy theories have circulated that they were corporate plants, or far-right evangelicals, or Sarah Palin moles—anything other than self-actualized black activists making a demand of white people who profess alliance.

Some argue that the reaction, both at the rally and in social media, is proof that Bernie’s Black Lives Matter critics are alienating allies. This misses a crucial point of the movement: It is not first about white people or their potential allegiance. It is a statement of power, not a plea for help.

Black Lives Matter is first and foremost about black refusal to accept politics as they stand—left, right, or center. Those who are asserting the value of black life have placed it above the property rights of Ferguson and Baltimore residents, above the rituals of holiday commerce, and, yes, above the inspiring surge of a socialist presidential candidate. Successful movements have always discomfited those invested in the status quo, including progressives. White people of all political stripes will be challenged, even shaken by this movement. That is a cost worth bearing.