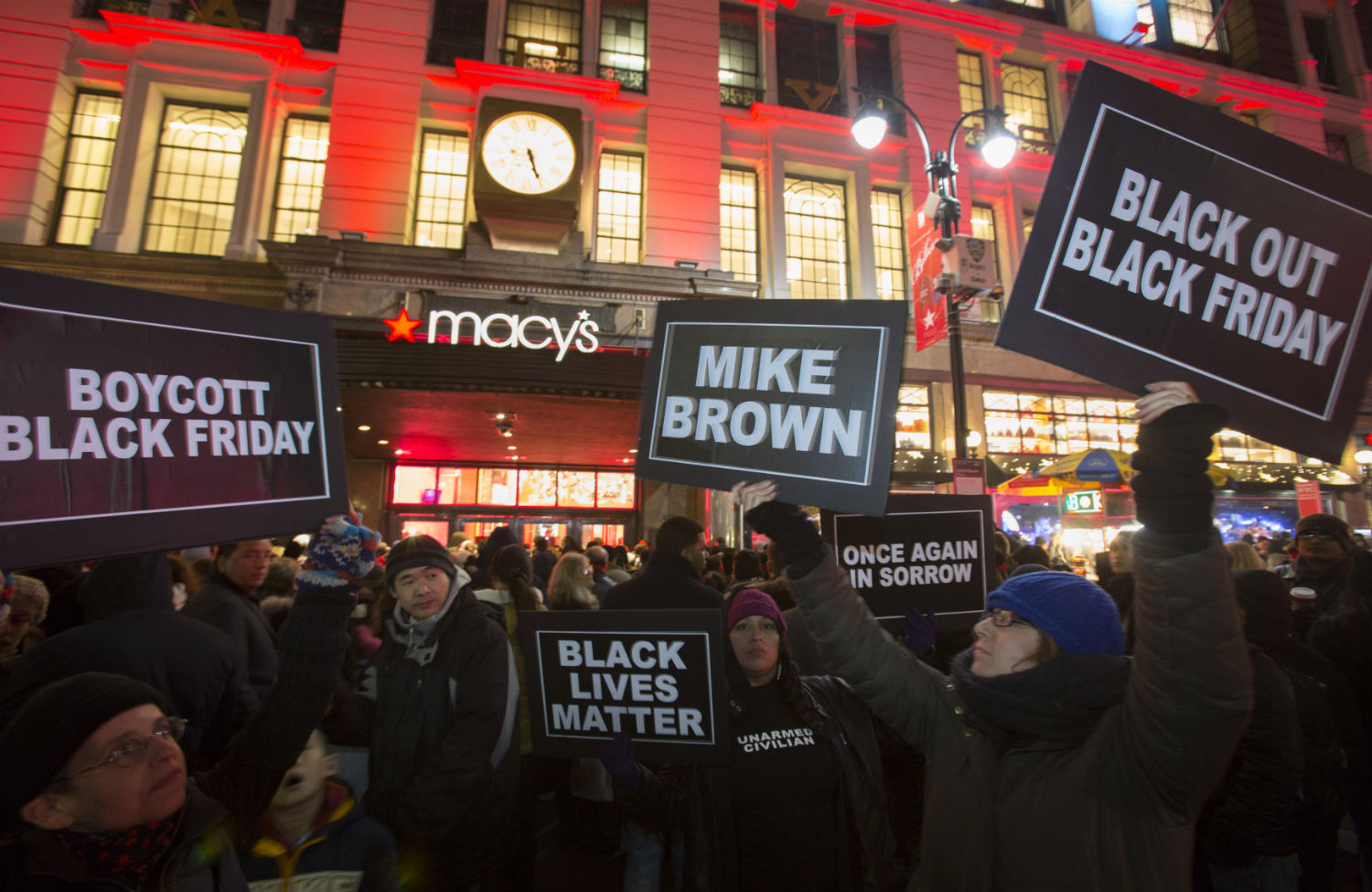 Protesters outside Macy's in New York call for a boycott of Black Friday sales. (Reuters/Andrew Kelly)

Walmart reported another good Black Friday this year, drawing millions into a euphoric weekend of shopping. And, as corporate communications boasted, hardly anyone noticed the handful of agitators outside who tried to disrupt the fete with their protests. The full staffing at stores showed “our associates are excited to be there for our customers at this special time, and they are not joining in made-for-TV demonstrations in any meaningful way.”

But Friday was a good day for Glova Scott, too. She and a few coworkers at a Washington, DC, Walmart joined the Black Friday strike actions to speak out against poverty wages and unfair schedules. They knew they might risk retaliation, and the campaign’s call for $15 an hour and full-time work wouldn’t dent the sales rush. But, in a “meaningful way” for the workers, taking a day together to push for a fair workplace at the retail giant helped restore some of the dignity they’re denied year-round, when it can be a constant struggle to provide for even basic family needs.

Walmart’s brand, Scott reflected, tries “to put out a public face of giving lots of money for charity and being family oriented, but that’s not what they’re about. They’re just about making profit, and…their biggest source of profit is by not paying their workers a livable wage [or] the type of benefits that would allow us to take care of our families in the best way.”

True, the Black Friday protests are just symbolic actions, but in a retail industry that traffics in ad hype and disposable pleasures, the right symbolism can go a long way, especially if it stirs trouble at hundreds of stores. Since this wave of anti-Walmart campaigning was launched in 2011 by the labor advocacy group OUR Walmart, activists have reported small wins for workers, like improved scheduling practices, legal defense against retaliation suffered by protesters, and growing numbers.

And Scott participated in another separate but parallel protest before heading to her night shift stocking shelves: demanding an end to police impunity and racial violence.

With Black Friday protests coinciding with outrage over the non-indictment for Mike Brown’s killing, Scott said, “there’s a convergence between the two.” Amid the surge in protests in solidarity with Ferguson, “everybody is sad and angered by these things, and wants to join forces. Because the more you do that, the more you have an impact on trying to stop these kinds of violations of our rights.”

In the calls for a #BlackOutBlackFriday boycott, the combination of protests against consumerism and rage against racial oppression may seem like an awkward juxtaposition, but that was the point, as Rashad Robinson of Color of Change explained on Friday:

While it’s unacceptable that we live in a world where co-workers must band together to start charity food drives to feed themselves and where Black children can be left dead in the streets at the hands of the police… In this new age of participation, the movements for economic justice and police accountability are indivisible because they both exist in the lived experiences of Black people who are confronting the systems of power which have brutalized our communities.

At a demonstration in Chicago, Kristiana Colón of the Let Us Breathe Collective, discussed the value of stolen black lives compared to the profits mined from working people: “So long as the system is more interested in corporations and corporate greed than people, we are asking people to divest in those corporations.”

If the connection between police violence and corporations seems odd, think about the symbolism of the uprisings in Ferguson. Many accused the protesters of escalating tensions and senselessly destroying property. The protesters responded with the refrains of “black lives matter” and people over property, and linking racial injustice with material inequity.

The images of scorched buildings, while painful to witness, served as a visual counterpoint to the slower-burning crisis of human rights violations in the same community. Is the spectacle of a burning storefront at night really more deplorable than a dead black man’s body left out on the street nearby, in the full light of day? A riot isn’t pretty, but it puts things in sharp perspective, and for Ferguson’s activists, only the language of a riot could shake the trappings of a system that silences them.

With the National Guard deployed to the area, Tory Russell of the community group Hands Up United said on Democracy Now!:

We have been basically asking for the same needs since we got off the plantation. We want education, we want proper housing, economic industries and we want to be able to control ourselves and be a part of this American dream, but they sold us a lie…. We are upset. We are hurting… They don’t sit down with the leaders and say—or even with the people and say, what do you guys need? They sent more National Guard. So, that lets you know what they care about. And I’m almost certain they don’t care about the people.

Russell observed that property in affluent parts of town seemed to enjoy ample security protection, while black properties were left exposed, revealing a violent order at work behind a night of seeming disorder. No one wanted to see Ferguson burn, but many saw that the fire had started long ago.

The Walmart protests are also about pushing back against the trappings of a system that silences, against a holiday that trumpets “great buys” while muting the labor injustices underlying both jobs and consumption in a low-wage economy. Black Friday’s protests and boycotts were symbolic in the way the boycotts against Jim Crow were symbolic: embodying disobedience to manifest collective power, and to focus public attention on crises that otherwise go ignored.

When the Ferguson activists march this week, seeking their own “meaningful way” forward through the crisis, they’ll bring a unified message to politicians, corporations, and the whole country that they won’t buy into a false set of values—and that the value of black life matters more.