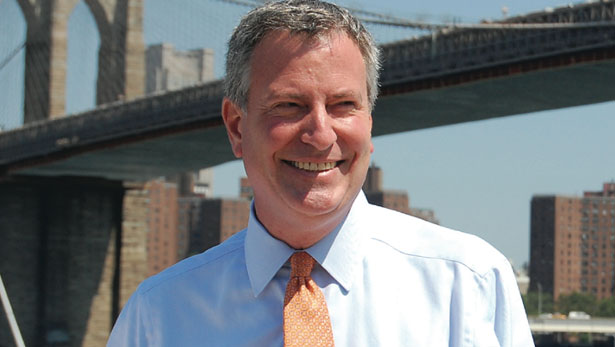 As a young adult, Warren Wilhelm Jr. became so alienated from his moody, alcoholic father that he adopted his childhood nickname, Bill, and his mother’s surname, de Blasio. The recent discovery that Warren Wilhelm Sr.’s government career was truncated in the 1950s by allegations of disloyalty to the United States may help de Blasio come to terms with his troubled family history. More significant for us, de Blasio’s candidacy for New York City mayor presents an opportunity for Americans to confront the enduring legacy of the Red Scare—and to consider the possibility of escaping its shadow.

Warren Wilhelm met Maria de Blasio in 1939 when both were on the editorial staff at Time. Recent graduates of Yale and Smith, they had grown up in Depression-era New York City and became active with the American Newspaper Guild, a CIO-affiliated union of journalists. During the war, she edited Italian-language propaganda for the Office of War Information (OWI). He served in the Pacific and lost a lower leg in the Battle of Okinawa. After the war, they married and started a family in Washington, DC, where Wilhelm found a job as an economist in the Bureau of the Budget.

Like many civil servants of that era, Wilhelm was soon ensnared by the federal employee loyalty program, established in 1947 to counter claims that the Truman administration harbored communists. At a July 1950 hearing, he answered allegations generated by months of FBI investigation. Informants reported that at Yale he had belonged to the American Student Union, which included communists. He knew a lot about the Soviet Union, and his record collection featured music of the Red Army and the Abraham Lincoln Brigade. His wife’s subordinates at the OWI claimed her editing suggestions were Soviet-friendly. Most damaging, Whittaker Chambers, the Time editor who had testified in 1948 that Alger Hiss and other US officials were Soviet spies, charged that Maria demonstrated communist sympathies. With assistance from the distinguished law firm Arnold, Fortas and Porter, Wilhelm rebutted each allegation and kept his job. But when another allegation about his Yale days surfaced in 1953, he left government service. He found work in the private sector, but his integrity had been impugned and his career derailed. Angry and embittered, he descended into alcoholism. His wife divorced him in 1969, when their youngest son, Bill, was 8. Wilhelm committed suicide in 1979. He never told his children about the loyalty allegations.

Unlike the sensational hearings before the House Un-American Activities Committee and McCarthy’s Senate committee, the federal employee loyalty program operated behind closed doors, so the damage it wrought has largely been hidden. During the program’s heyday (1947–56), tens of thousands of civil servants underwent protracted investigations, which they tried to keep secret because the stigma had material consequences even for those who were cleared. The effects were felt far beyond the estimated 2,700 dismissals. Loyalty defendants faced reduced employment options, social isolation, and severe emotional and physical strain. Their children grew up wondering about the shadow hanging over their family. Many of them, like de Blasio, are still trying to unravel the mystery.

In addition to scarring a generation of civil servants and their survivors, the loyalty program curbed the social-democratic potential of the New Deal. During the crises of the Great Depression and World War II, government service attracted talented young activists who hoped to push the New Deal to the left. But their effectiveness, alliances with progressive labor and consumer movements, and challenges to race and sex discrimination elicited a powerful reaction. Conservatives exploited public fears of Soviet espionage to push noncommunist leftists out of government or toward the center. Also, because the right associated feminism with communism, investigators paid disproportionate attention to professional women and to men (like Wilhelm) who married them. The casualties extended beyond individual lives to a long list of progressive regulatory and redistributive policies. In areas from national health insurance to labor and consumer rights, from public assistance to public housing to public works, policy experts who survived investigation adjusted their prescriptions to de-emphasize the structural causes of inequality.

Like their McCarthy-era forerunners, conservative pundits have been trying to scare voters by casting de Blasio as un-American. They call his anti-poverty proposals “class warfare,” and they highlight his youthful activism against Ronald Reagan’s policies in Nicaragua, his interracial marriage and his wife’s progressive views. Such tactics have constrained our political discourse for too long. Like the Great Depression, the current moment demonstrates capitalism’s tendency to deepen inequalities that are not only unfair but bad for the economy and bad for democracy. If de Blasio is elected and delivers on his promises to support progressive taxation, a living wage, union rights, affordable housing, public education and racial justice, then he will have laid more than one ghost to rest. Landon R.Y. Storrs

Greg Mitchell explored the roots of the Red Scare and McCarthyism last year in The Nation.