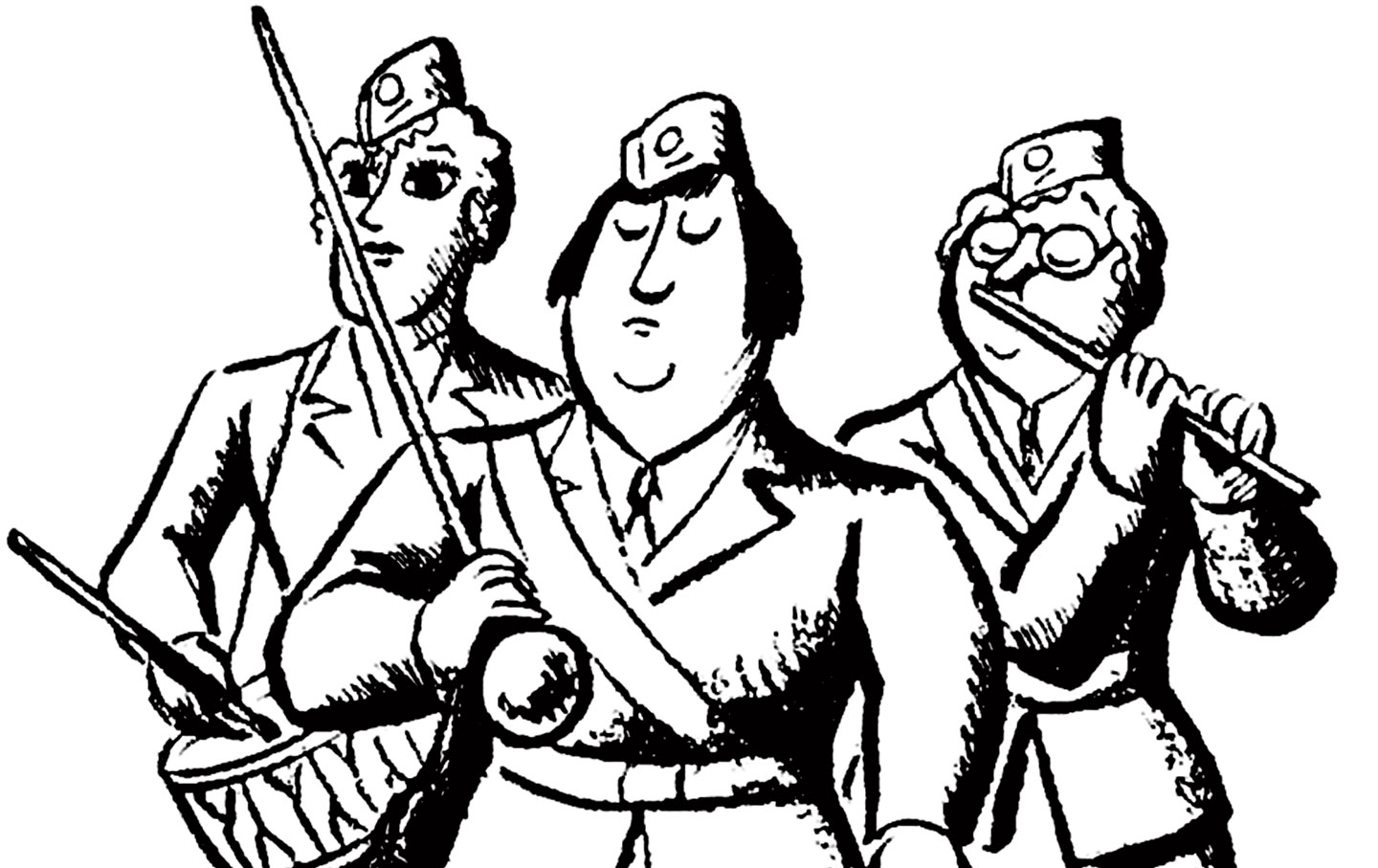 Excerpted from the October 3, 1936 Issue

Through the swirl of dust and torn strips of last year’s phone books and old mail-order catalogues that fly into your eyes and mouth and find their way down the back of your neck, they come, marching between hedges of faces, sweating in their cheap shimmery costumes out of old romantic musical comedies—the bands, the bands, the junior bands, the cowboy bands, the redskin bands, the ladies’ auxiliary bands (every lady has a fresh permanent frizzle, every lady sucks in in front and sticks out behind); cheeks puff, snare drums rattle, cymbals clash, and in front of every band stalks, minces, goose-steps, hobblewalks the inevitable drum major. There are more cops than you can imagine—and it takes them eleven and a half hours to pass a given point.

What has happened is that in spite of the hopes of the founders that the [American] Legion would be an aggressive arm against labor unionism and dangerous thoughts and a defense for the vested interests, it has settled down in this its year of greatest membership, of its biggest parade and smoothest convention—not a controversial matter reared its head from the floor—to being just another fraternal organization with its clubrooms and bridge parties and social work and poker evenings and fascinating internal politics. As such it is the field for the careers and supplies the meal tickets of thousands of professional organization workers. The legionnaires’ interests, and those of the increasingly important women’s auxiliary, lie in the bands and the parades and the junior baseball teams and in the comfortable feeling of belonging so necessary to people now that small-town life is broken up and the family is crumbling and people live so much by themselves in agglomerated industrial masses, where they are left after working hours with no human contact between the radio and the car and the impersonal round of chain stores and picture palaces. The fraternal organizations give people a feeling of belonging to something outside themselves. They are the folk life of America. We’ve got to have it. It’s lonely being a unit in a parade that takes eleven and a half hours to pass through the public square. Makes you feel too small. Until something else more urgent arises to draw people together and as long as the little fellow can pay his dues, the professional organizers will continue to lead Elks and Redmen and Veiled Prophets and Mystic Shriners and legionnaires and their wives and little ones in brainless antics, decked in fatuous costumes, behind really excellent marching bands (that’s one thing we do well) from convention city to convention city across the country. And steadily the American passion for a smooth-running machine, if nothing else, will tend to eliminate troublesome ideas, outstanding personalities, and dissenters who ask awkward questions about how and in what direction the parade is being led.

John Dos Passos (1896–1970) wrote occasional pieces for The Nation between 1920 and 1943. He was later a frequent contributor to National Review.