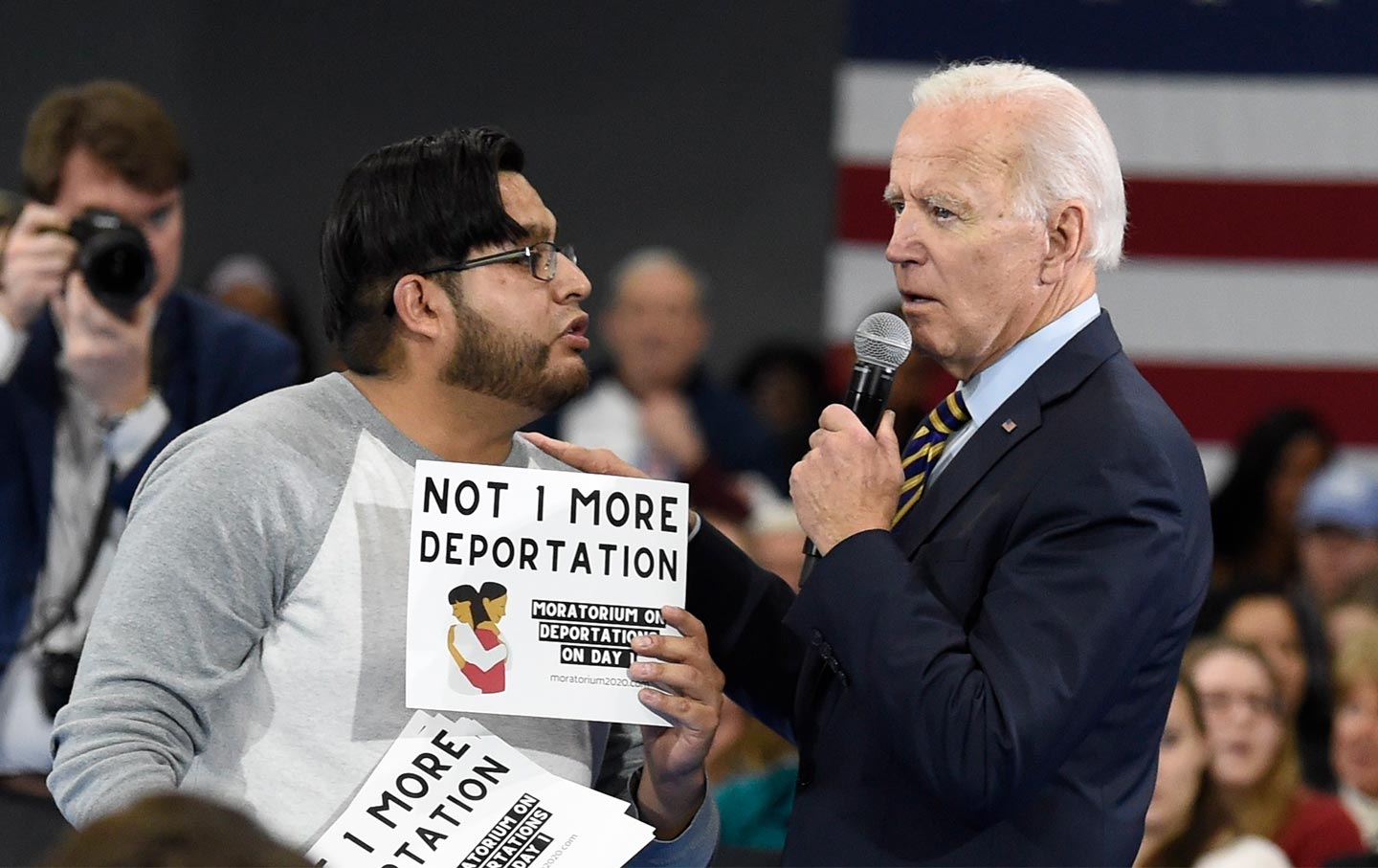 Last Thursday, in a packed college gym in Greenwood, South Carolina, I stood next to Silvia, a local immigrant mother and activist, as she asked Joe Biden a question. I translated for her as she told the crowd about her daily fear of ICE separating her family. It’s hard for her to trust Biden, she explained, because he has defended the millions of deportations that took place when he was vice president. Under a Biden administration, could her partner or children be next?

Silvia asked if Biden would use executive action to protect undocumented immigrants from deportation on his first day in office. Biden bluntly said no and went on to defend Obama’s record on immigration. As a longtime activist, a 2008 volunteer for the Obama campaign, and a formerly undocumented immigrant myself, I pushed back and reminded him that millions of families were separated while he was vice president.

That’s when Biden interrupted me and said: “You should vote for Trump.”

I have been fighting for immigrant rights for a long time and have encountered many politicians—Democrats and Republicans—that have dismissed the pain of my community. But I was still shocked to hear the 2020 Democratic front-runner tell me to my face to vote for Trump, simply because I pressed him on a question about basic dignity for immigrants.

Let me be clear: Another four years under Trump would be devastating for our community. That’s why Biden’s callous answer—if you don’t like what I have to offer, you might as well vote for Trump—is so disturbing. When Biden first walked out on stage in Greenwood that night, he said he wouldn’t take South Carolina’s vote for granted—he wanted to “earn their support.” But maybe the same does not apply to the immigrant community.

Biden was elected to the White House for the first time in 2008 following a historic wave of immigrant protests. In a post 9/11 political landscape that was already hostile to immigrants, the passage of an extremely anti-immigrant bill in the House of Representatives triggered massive strikes and boycotts across the country. The “mega marches” of 2006, at the time the largest protests ever in US history, demonstrated the economic and protest power of the undocumented community—and the potential for a new voting bloc in naturalized and first generation citizens.

“Today we march, tomorrow we vote” was the famous slogan proclaimed on banners and chanted in the streets. At this time, I was an 18-year-old undocumented immigrant, and though I could not vote, I became very engaged in the political process. A year later, on the campaign trail in 2007, Obama promised to deliver a pathway to citizenship for the 11 million immigrants who have been living in limbo for years. He pledged to introduce legislation in the first 100 days of his presidency and have it signed within a year.

I was moved by Obama’s promise to bring justice to the immigrant community and later became a volunteer for his 2008 campaign. And I was not alone. A large majority of newly activated immigrant voters, including record numbers of Latinx and Asian Americans, supported Obama and carried him to the finish line in several competitive states.

Obama won the presidential election in part because of this newly consolidated immigrant vote. And coast to coast, millions of undocumented immigrants celebrated a fresh hope for a pathway to citizenship and a future out of the shadows, free from the fear of detention and deportation.

Unfortunately, you know the punchline here as well as I do: Obama never passed immigration reform. Instead his administration went on to deport 3 million people—the very same people he had promised to protect. Those deportations separated millions of families—parents, children, loved ones, community members. To this day, the majority of those families have not been reunited and most likely, never will be.

That is why Silvia and I went to the town hall and asked this question of Joe Biden. As an Obama supporter in 2008, I had hope and trust in the Democratic Party. Now, while the Democratic establishment defends Obama’s record, immigrants like Silvia and I have not forgotten the cost of those 3 million deportations. Biden told us repeatedly that night that under his administration, “there will be no family separation,” but Obama’s legacy has taught me to know better. As long as we deport undocumented immigrants, this country will separate families; deportation is family separation.

In many ways, the game is rigged against the undocumented community in 2020. I want to prevent Trump’s reelection as much as anyone. But it is hard for immigrants to trust that Democrats won’t simply scale back Trump’s most egregious and controversial policies while returning to the Obama status quo of silent mass deportations. In fact, based on all of Biden’s own words, I believe that is exactly what his administration would do.

To show the immigrant community that they are serious about addressing our decades-long, bipartisan attack on immigrants, Democrats must reject Obama’s legacy of 3 million deportations. As I told Biden on Thursday night, the way to do that is to commit to enacting a moratorium on deportations on their first day in office, ensuring no more families are separated while waiting for legislative reform that has stalled in Congress for more than two decades.

This is not a politically impossible feat. Under Trump more than ever before, the American public has seen the reality and the pain of detention and family separation. Throughout the campaign and the Democratic debates, candidates from Julián Castro to Bill de Blasio have gone after Biden for defending Obama’s deportations. Bernie Sanders has already committed to a moratorium of deportations on day one; Elizabeth Warren has said she is “open” to it. And just in the time since the story of my interaction with Biden has gone viral, more organizations have come out to support the demand for a moratorium of deportations.

In 2017, after living as an undocumented immigrant for over 10 years, I finally became a US citizen, which means this is the first election I will be able to cast a vote for president.

And no, Biden, I’m not going to vote for Trump.

I am hopeful that Trump’s trademark anti-immigrant rhetoric will backfire and that most American voters will choose to stand by the side of dignity for my community. But the eventual Democratic nominee has to give the immigrant community and our allies something worth voting for.

Through a decade of fear and suffering, my community has learned from Obama’s failure and knows that no electoral victory alone will win us protection and dignity in this country—our rights must also be fought in the streets, just as they were back in 2006. It remains to be seen if the Democrats have also learned their lesson: whether they will see our pain and commit to a new path forward—or dig in their heels and tell us to just vote for Trump.