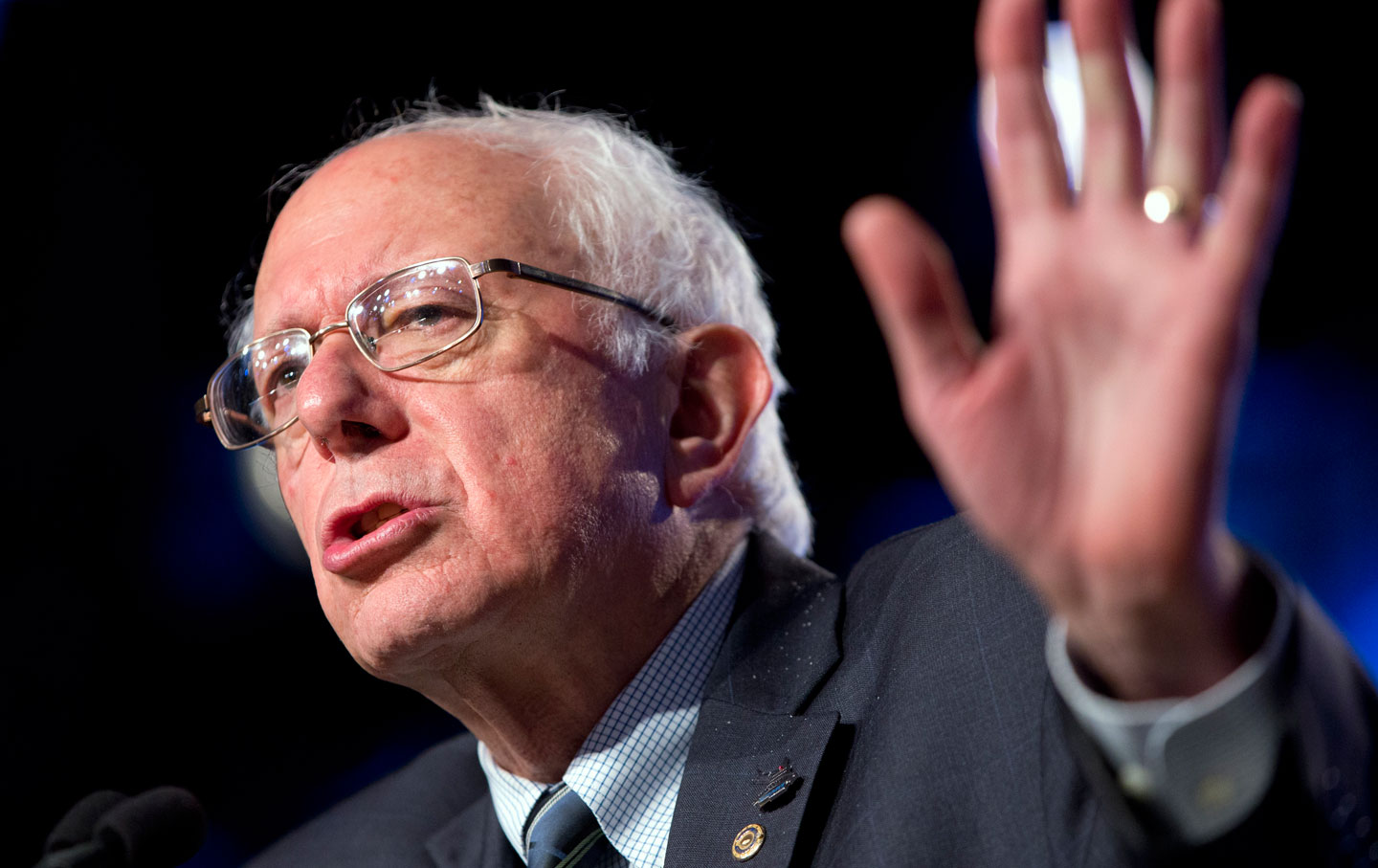 It’s not that Senator Bernie Sanders doesn’t already have a full plate of campaign appearances. He keeps upping the ante with big ideas for fundamental reforms and is stirring the vital juices of left-liberal Democrats. But Bernie dropped off the campaign schedule on Thursday to reach out to the people of Greece. Far as I know, Greeks don’t get to vote in US primaries, but never mind. Bernie wanted to address their sorrows.

“I am expressing solidarity with the people of Greece in a time of cruel and counter-productive policies,” he declared at conference he arranged on Capitol Hill. Sanders called it a full-blown “humanitarian crisis” that other nations, including America, must not ignore; 26 percent unemployment, 30 percent in poverty, 50-60 percent of young people without jobs. Yet the financial masters of Europe (the bankers who lent Greece all the money in the first place) are imposing a new round of crippling austerity—deeper suffering—in effort to get their money back.

Why should we care? Bernie explained. “The people of Greece are being told their voices are not being heard,” he said. “Their misery does not matter. That democracy itself does not matter.” The Greek predicament endangers all of us, he warned. What the Germans and allied creditor nations are doing to Greece has a chilling similarity to what the American, British and French victors imposed on defeated Germany after World War I—the punishing burden of debts impossible to repay. That financial vengeance ultimately deranged the German populace and led to Adolph Hitler.

“What many people do not know about Greece today is that the party that came in third in recent elections is called Golden Dawn,” Sanders warned. “Some people call it the neo-Nazi party, but other people say there is nothing ‘neo’ about it.”

“In my view, we should learn from history. We should understand that when democracy fails and people cannot get what they voted for because of outside forces it leads to contempt for democracy and people vote for parties like Golden Dawn.”

For those familiar with the senator’s long political career, expressing solidarity with suffering Greeks while teaching a little history is pure Bernie. Political reporters are typically confused by his socialist identity and they either joke about this weird, rumpled lefty running for president or try to expose alleged contradictions. Did you know the NRA supported Bernie’s first race for Congress? Well, yes, Bernie represents Vermont. In Vermont, hunters not owning a gun is like homeowners not owning a snow shovel.

Here’s the secret of Bernie’s politics. He is relentlessly, stubbornly substantive—grounded in the guts and mechanics of governing. He is not given to cheap rhetoric or sleazy hits on opponents. In the House, he was admired for his ability to build left-right coalitions on issues that really were not ideological. In the Senate, he and John McCain wrote the VA reform legislation. Lots of members of Congress, left and right, have similar qualities but they don’t get great press because most political reporters think politics is only about elections, government is boing.

To reinforce his alarm about the Greek crisis, Bernie brought two liberal stars of American economics—Joseph Stiglitz of Columbia and Jamie Galbraith of University Texas (yes, the son of John Kenneth) to explain the inside baseball of the Eurozone and the ominous implications. To provide a balanced debate for the mostly young audience, Bernie’s panel also included an orthodox economist (Jacob Kirkegaard) from the Peterson Institute for International Economics.

As he often does, Sanders took the subject to a higher plane. It is not just Greece’s problem, Bernie explained, and not just Europe’s. The global economy is now burdened with an international financial system that allows or encourages reckless actors to exploit weaker nations and redistribute wealth and income to the top. Bernie offered no details but he wants fundamental reform of the International Monetary Fund and World Bank, a new Bretton Woods agreement that would end the unregulated flows of international capital that are so destabilizing.

“The system is rigged for the wealthy,” Sanders said. “The 85 richest people in the world own more wealth than the bottom half of the people. I hope this conference will start a serious discussion of about how to change the international financial rules to expand economic opportunity and reduce income inequality and poverty. The global economy has simply failed when so few have so much and so many have so little.”